The Barney & Smith Car Company went by a number of names over the years and its history dates to the early years of the railroad industry itself, well before electrically operated streetcar lines and interurbans came into widespread use (by nearly 50 years!).

As such, during the company's early years of production it primarily focused on the construction of two types of equipment; either standard or narrow-gauged freight and passenger cars.

With either, Barney & Smith (then known as the Barney, Parker & Company) became highly touted for the extremely high level of craftsmanship and elegance of its cars.

After struggling prior to the Civil War the company became highly successful afterwards although the financial panic of the late 19th century and a lack of innovation eventually brought it down.

During its final 30 years or so of operation Barney & Smith tended to focus almost exclusively on interurban and street railway equipment. 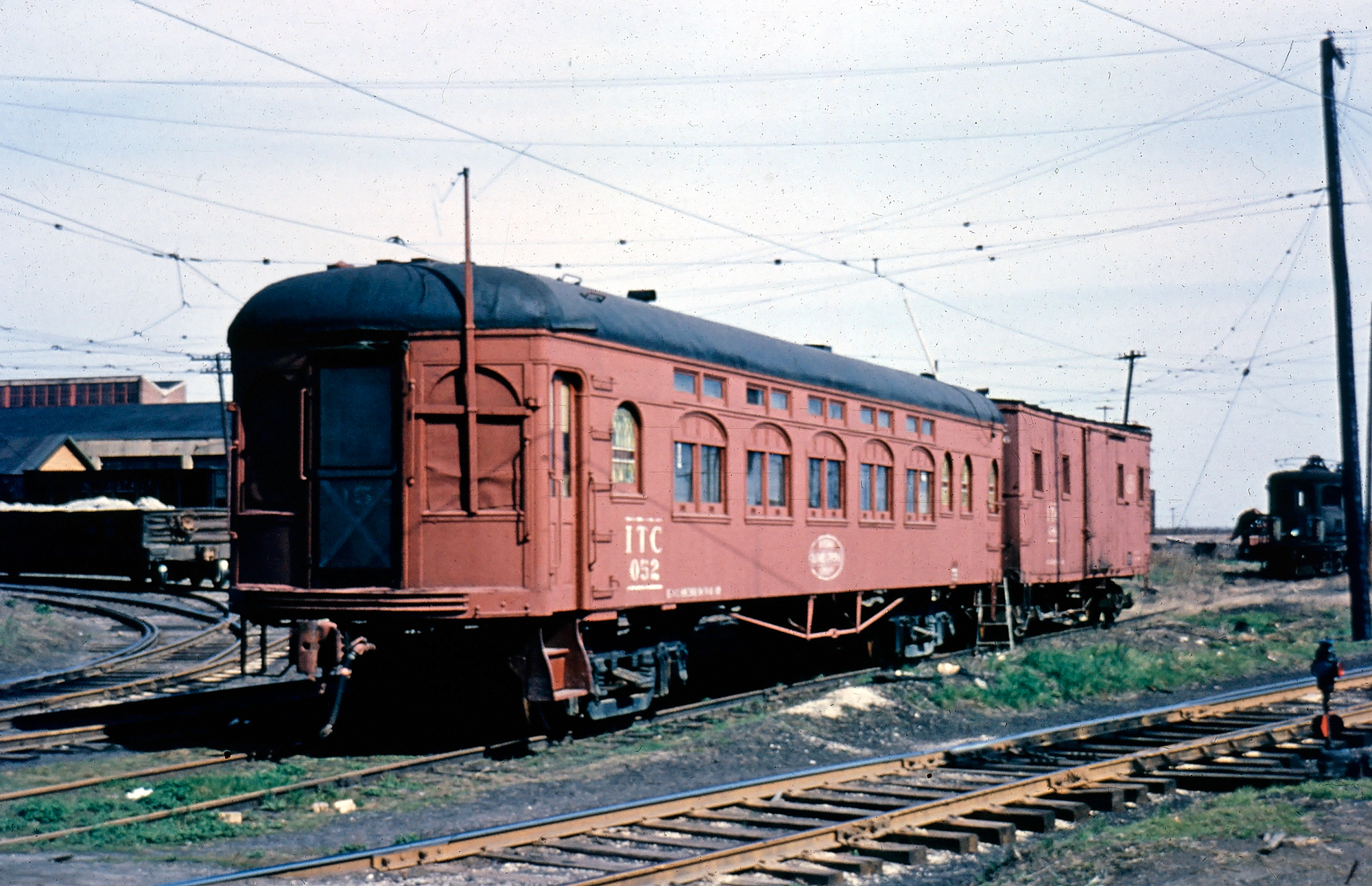 A former Illinois Terminal sleeper, #052, then used as a bunk car, is seen here stored at the yard in Decatur, Illinois during the spring of 1952. It was built by Barney & Smith as sleeper "Decatur" in 1911. It originally held 20 berths and remained in service until 1941 when it was converted to a bunk car. James Stitzel photo. American-Rails.com collection.

The Barney and Smith Car Company dated back to the E. Thresher & Company of 1849. That year, a railroad car manufacturing operation was started by Eliam Eliakim Barney and Ebenezer T. Thresher, the former a teacher and the latter a Baptist minister.

Both men, interested in a career change, or at least another line of work, believed that there was a growing market for new freight and passenger equipment.

They were certainly correct in that assessment as there were few major car builders of any kind at that time considering that the railroad industry itself was only three decades old.

However, they needed help to get started as neither were particularly knowledgeable when it came to the actual design and construction of cars.

As their luck would have it help came in the way of then one of the industry's most experienced car builders, Elijah Packard. With his help they set about setting up their new business, purchasing ground, and finding a suitable location.

Their choice proved to be one of peculiarity, Dayton, Ohio. At the time the city had no rail service whatsoever and all parts and finished products had to be shipped via water transport until tracks finally reached the city.

Of course, as fate would have it the company proved to be situated an ideal location with railroads soon crisscrossing the state and the coming interurban and streetcar industries built thousands of miles in Ohio alone.

During the 1850s the company expanded into agriculture equipment but the increasing demand for rail cars outstripped their production and soon they began focusing solely on the latter.

Packard passed away in 1854, which resulted in Barney looking for another partner. That same year he brought in Caleb Parker, renaming the business as the Barney, Parker & Company.

After the mid-1850s the operation began expanding more heavily into passenger equipment. It was here when the company earned its reputation as a highly regarded builder.

For instance, its sleeping cars were quite opulent and came completely equipped upon arrival to the customer, all of the way down to the bed linens and pillows!

As a result, the up-and-coming George Pullman purchased several cars from Barney, Parker & Company during his early years in the business.

The company had difficulties in the late 1850s during a financial panic and later the Civil War due to the fact that many railroads, especially in the South, could not afford to pay for their equipment.

It was also during this time in 1864 that Parker retired and Preserved Smith replaced him. Again, the company name was changed becoming the Barney, Smith & Company. Also, things looked up after the war as the economy improved and so did business.

Just two years later in 1866 the business was changed again after Barney's son entered the business and was renamed as the Barney & Smith Manufacturing Company. During this time the company also began building the classic passenger car of that era featuring a clerestory roof.

The 1870s saw the company expand into the field of narrow-gauge equipment becoming a major producer of such, particularly because of the fact that it pioneered the two-and-two seating in passenger cars for the gauge.

It was at this time Barney & Smith Manufacturing was at its peak and said to be the largest car manufacturer in the country, just before George Pullman opened his massive complex in Illinois during the early 1880s.

In 1890 the company entered the field of electrically powered cars due to the fact that the street railway industry was on the rise and the interurban lines were in their infancy, poised to take off by the turn of the century.

Three other important events occurred with the business during this time:

Barney & Smith had always been highly regarded for its incredibly high and excellent equipment standards but it was not very innovative and held almost no patents of any significance.

As its market share eroded it turned more heavily to the development and construction of interurban and streetcar equipment.

The company first cataloged one-truck designs but then later after the turn of the 20th century switched to the more standard (and stable) two truck setup.

The Barney and Smith Car Company was fairly successful in this new market but it was short-lived. As the interurban boom ended after 1910 so too did sales.

Then, in March, 1913 a massive flood heavily damaged the Dayton complex forcing it into bankruptcy. It 1915 it exited receivership only to be met with a dead market and no sales. Finally, in 1923 the company closed permanently ending more than 70 years of manufacturing cars.