The most impressive engineering feat by any western railroad in conquering the Cascade Mountain range to reach Seattle, Washington was Milwaukee Road's Snoqualmie Pass grade.

The tunnel, the longest on the entire railroad at well over 2 miles in length, was not opened until five years after the original route commenced operations.  In the meantime the railroad was forced to rely on a steep and tortuous temporary right of way.

When going west, Milwaukee management insisted on constructing the most efficient and best engineered route.  Snoqualmie was a microcosm of this mindset featuring only a slight grade and was less than a third of length of Great Northern's nearby Cascade Tunnel.

Perhaps John Crosby, an employee at both Milwaukee Road and Burlington Northern who has ridden through both Cascade and Snoqualmie by train said it best: "...Iron Horse/Pioneer/John Wayne Trail (Olympian Hiawatha Trail) bicycles roll majestically over the best engineered railroad route through the Cascades." 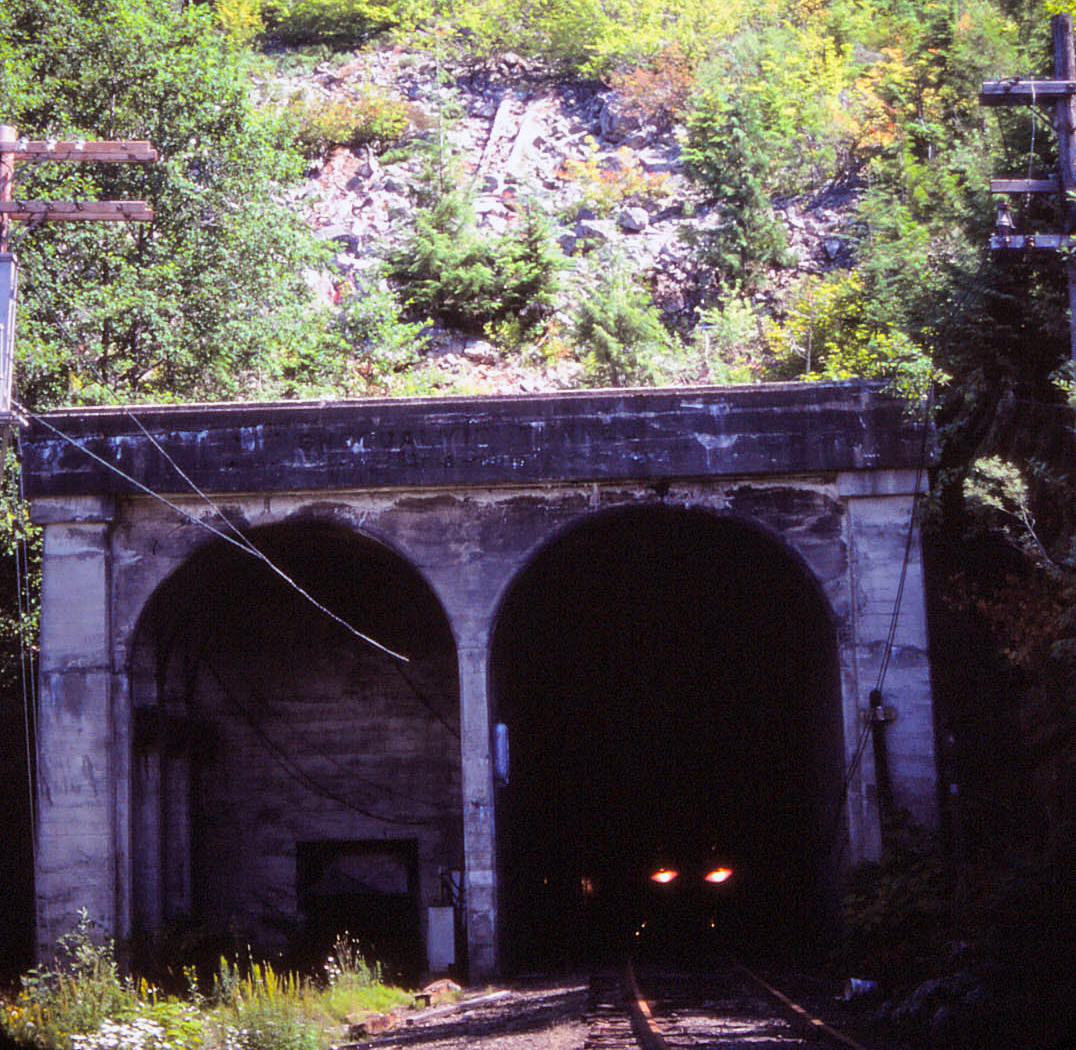 The often-photographed western portal of Milwaukee Road's Snoqualmie Tunnel. It was lined with two portals for a planned future double-tracking, which never occurred. Alan Freed photo.

Few rail lines, let alone railroads, have garnered such interest, intrigue, and awe as the Chicago, Milwaukee, St. Paul & Pacific Railroad's Pacific Coast Extension, even 30 years since it was abandoned. Unfortunately, the best engineered rail line through the rugged Cascades could not save it from the inept decision making of management at the time and it is now but weeds and trails, a vital transportation artery no longer available to shippers and the American economy. 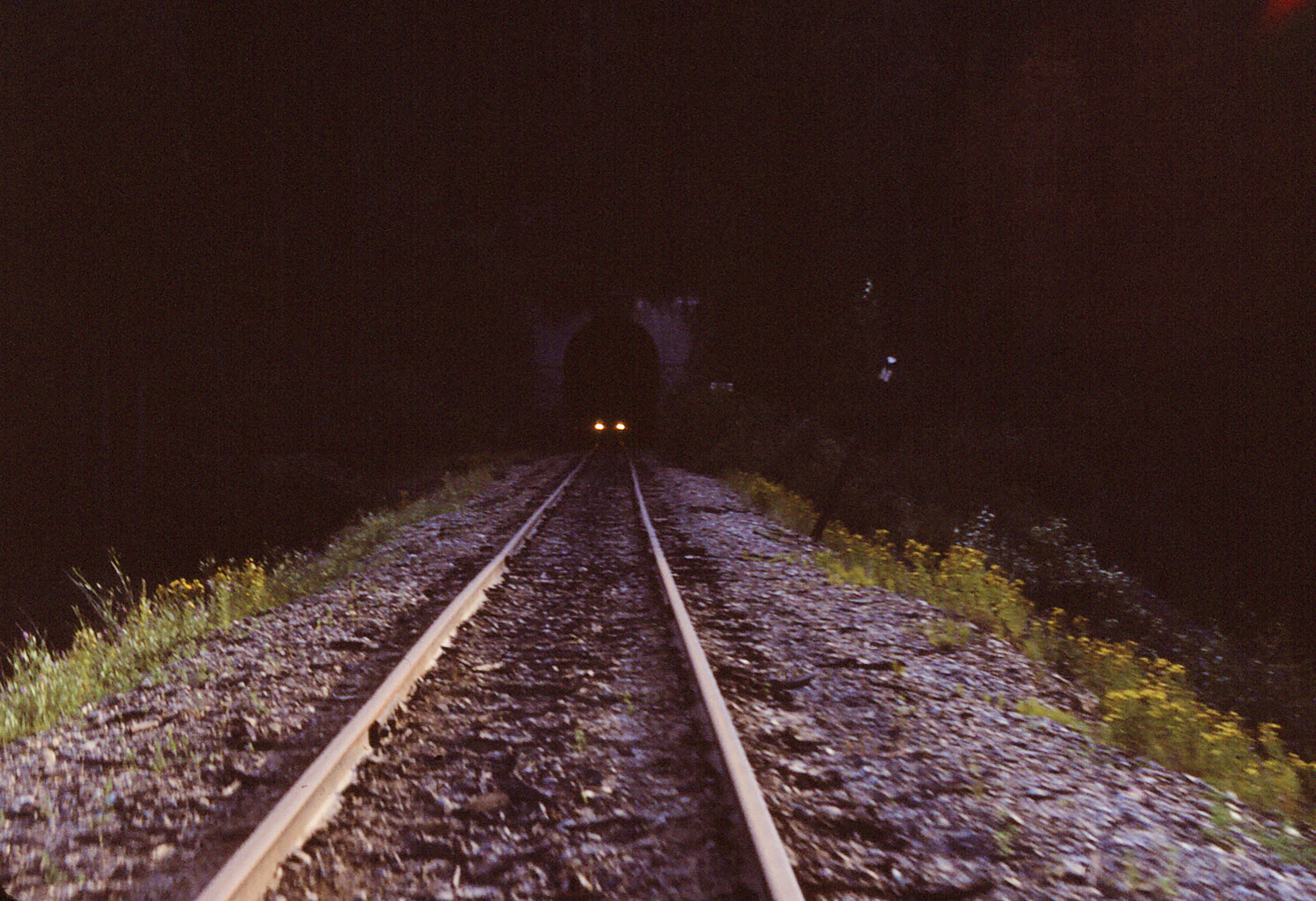 A view of the Milwaukee Road's eastern portal of Snoqualmie Tunnel during August of 1980. This was part of a speeder trip undertaken by Alan Freed and Chuck Bothwell. To view more photos please click here.

Unlike the Great Northern and Northern Pacific the CM&StP was not given free government land grants and had to both purchase all of its land from private landowners as well as take over a number of small, new, or floundering railroads across the region. 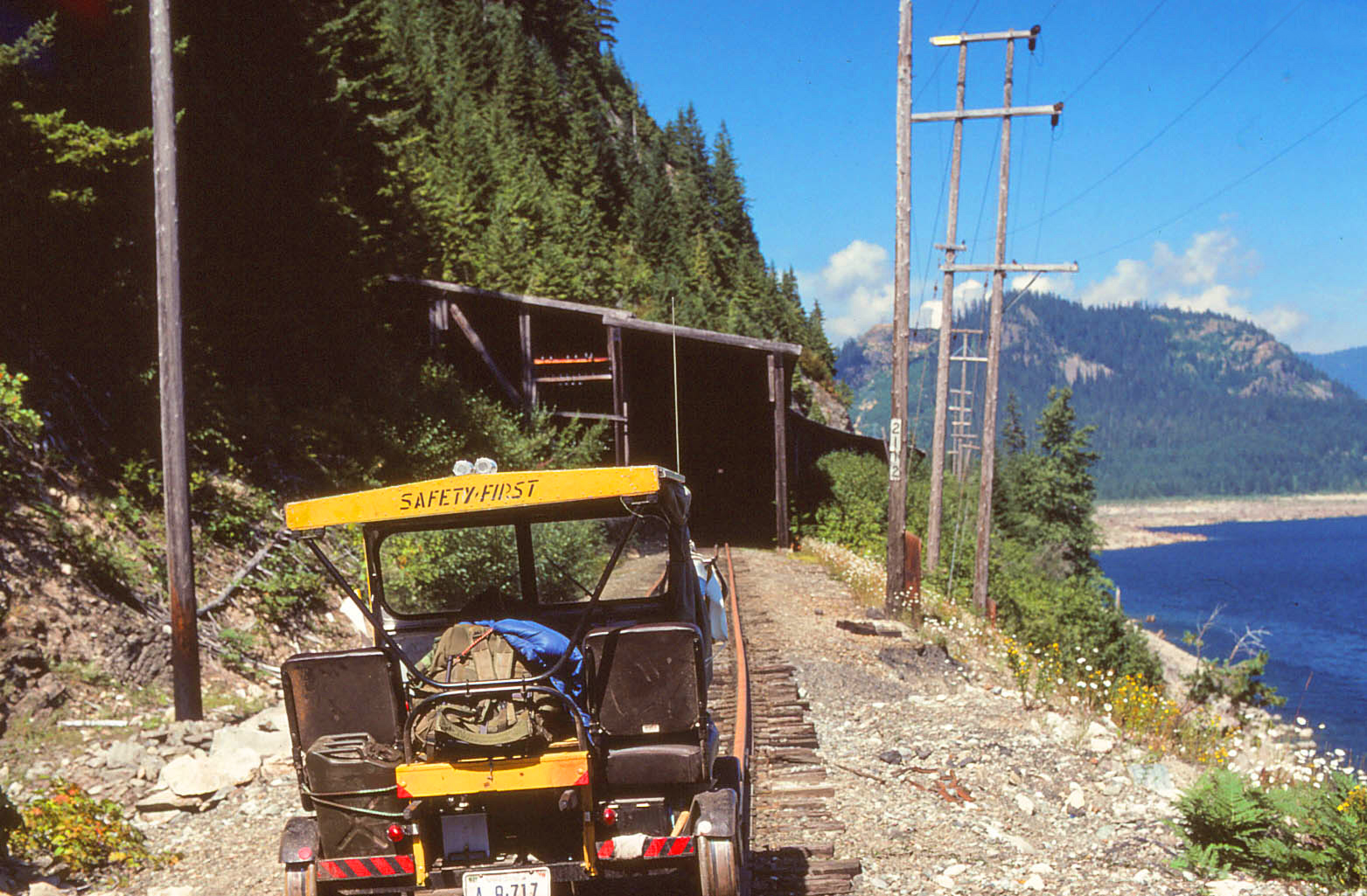 The Milwaukee Road's wooden snowsheds along the eastern approach to Snoqualmie Pass Tunnel. To the right can be seen Keechelus Lake. Alan Freed photo.

The Milwaukee Road's Snoqualmie tunnel lies in western Washington about 55 miles east of Seattle. It was one of the final tunnels the railroad had to construct although it was also the longest and took two years to complete. The pass lay along the railroad's final stretch of its Pacific Coast Extension covering just over 330 miles from the Idaho/Washington state line to port city of Seattle.

The railroad would break down the Washington state portion of its  main line into four divisions; the Idaho Division (which also included the route through Idaho), the Eastern Washington Division, the Yakima Division (in which the tunnel was located), and finally the Coast Division.

A map of the Milwaukee Road's Snoqualmie Pass and Tunnel, circa 1957; denoted in blue is the entire length of the pass from Cle Elum to Cedar Falls. Author's collection.

Surveying work for the route across Washington state began officially in October, 1905 with crews laying out three different lines. In total, the crews surveyed some 1,655 route miles while just 300 miles actually spanned the distance between the Idaho/Washington state line and Maple Valley, Washington

At that point the Milwaukee Road would connect with the Columbia & Puget Sound Railway to reach downtown Seattle. Broken down, crews surveyed roughly 5.5 miles of right-of-way for every one mile ultimately chosen as part of the main line. 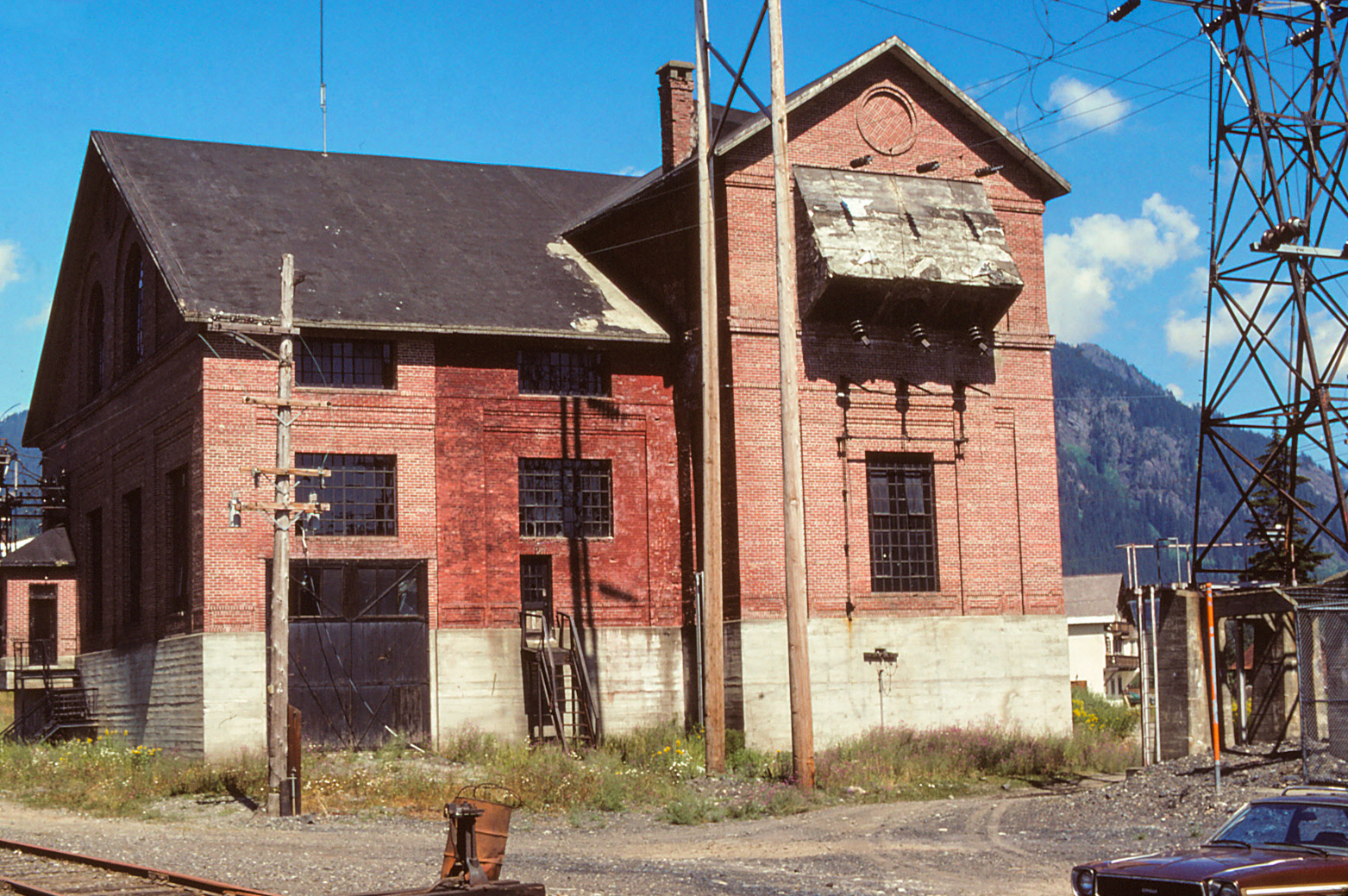 Construction through Washington state began in late May, 1906 with the principle contractor being H. C. Henry, who sub-contracted out various stages of the building to other companies.

By early 1909 the route was complete and open through the state, although several years of construction work remained to get the line up to par, such as the completion of Snoqualmie Pass Tunnel.

The delay to build the tunnel was the result of its remote location. To better facilitate moving goods and supplies to the site upon construction the railroad elected to first complete a temporary line over the pass.

Since construction on the tunnel did not begin until 1912 the bulk of the work on the structure was actually done by the Milwaukee Road itself and not outside contractors.

The tunnel took two years to complete, opening in 1914, spanning a distance of 11,890 feet or 2.25 miles. Of note, the structure was setup to eventually be double-tracked although this never occurred (thus the use of dual portals on the western slope).

The tunnel was immediately prepped for electric operation, which commenced shortly after its opening. Overall, the ruling grade on the route between Cedar Falls and Rockdale, up to the tunnel's western portal is 1.7% with the tunnel itself level inside.

From Cle Elum up to Hyak at the tunnel's eastern portal the grade is even easier being just 0.7% (in comparison, before the tunnel was completed grades over the pass were 2.2% up the mountain's eastern slope and 2.75% along its western slope). 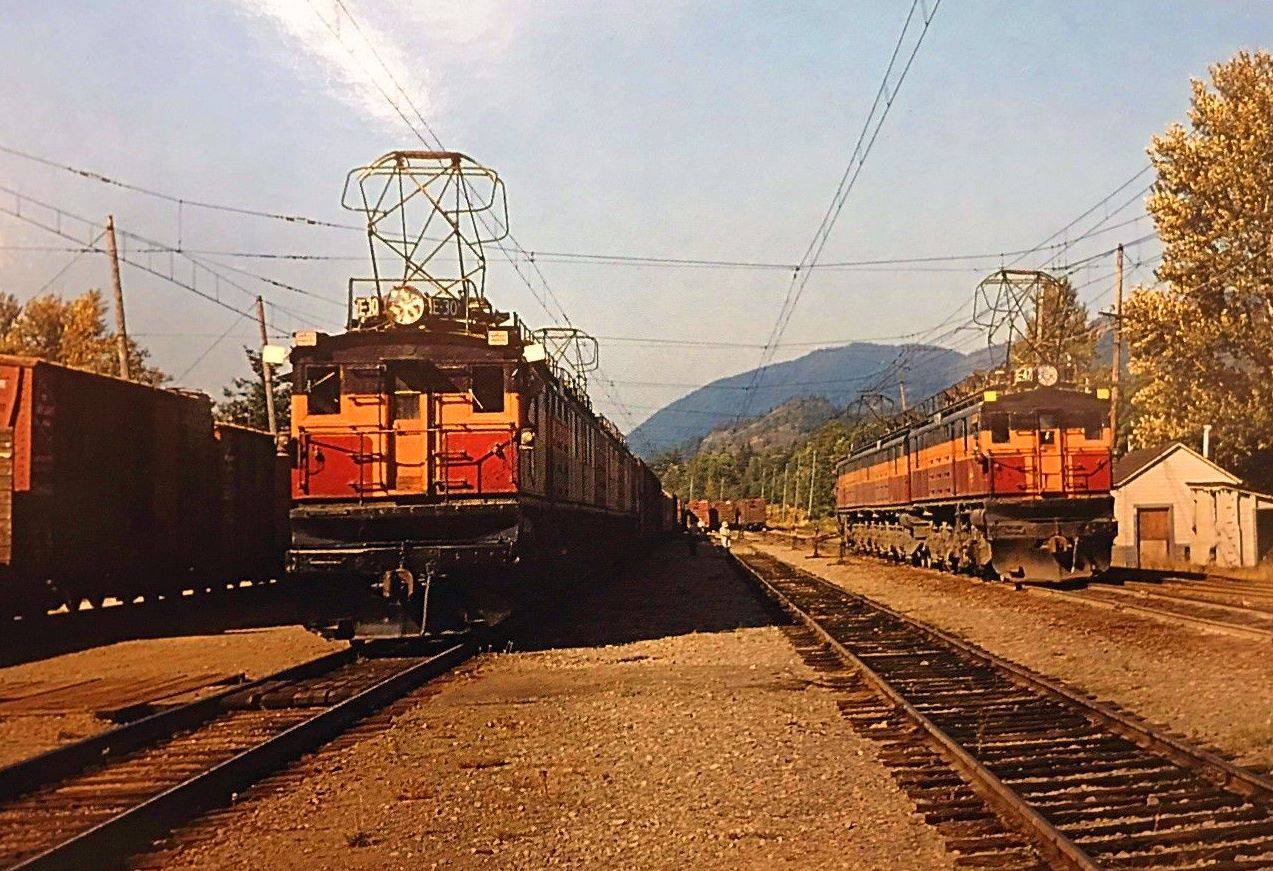 Milwaukee Road boxcab set E-30 is ahead of an eastbound freight extra as it prepares to depart Cedar Falls, Washington and assault the grade over Snoqualmie Pass on August 24, 1958. To the right is helper set E-47 about to be cut-in.

To compare this with the nearby "new" Cascade Tunnel (the second structure to span Stevens Pass), hailed as an engineering marvel of its day when completed in 1929 it is a daunting 7.8 miles in length more than three times longer than the Snoqualmie Pass Tunnel.

This extraordinarily long tunnel resulted in builder Great Northern constantly fighting fumigation issues after it de-electrified the route in the 1950s and even today, owner BNSF Railway has similar issues requiring ventilation fans to be in operation on a daily basis and trains must wait for the air inside to be cleared before operating through.   For more information and history about the pass and tunnel please click here. 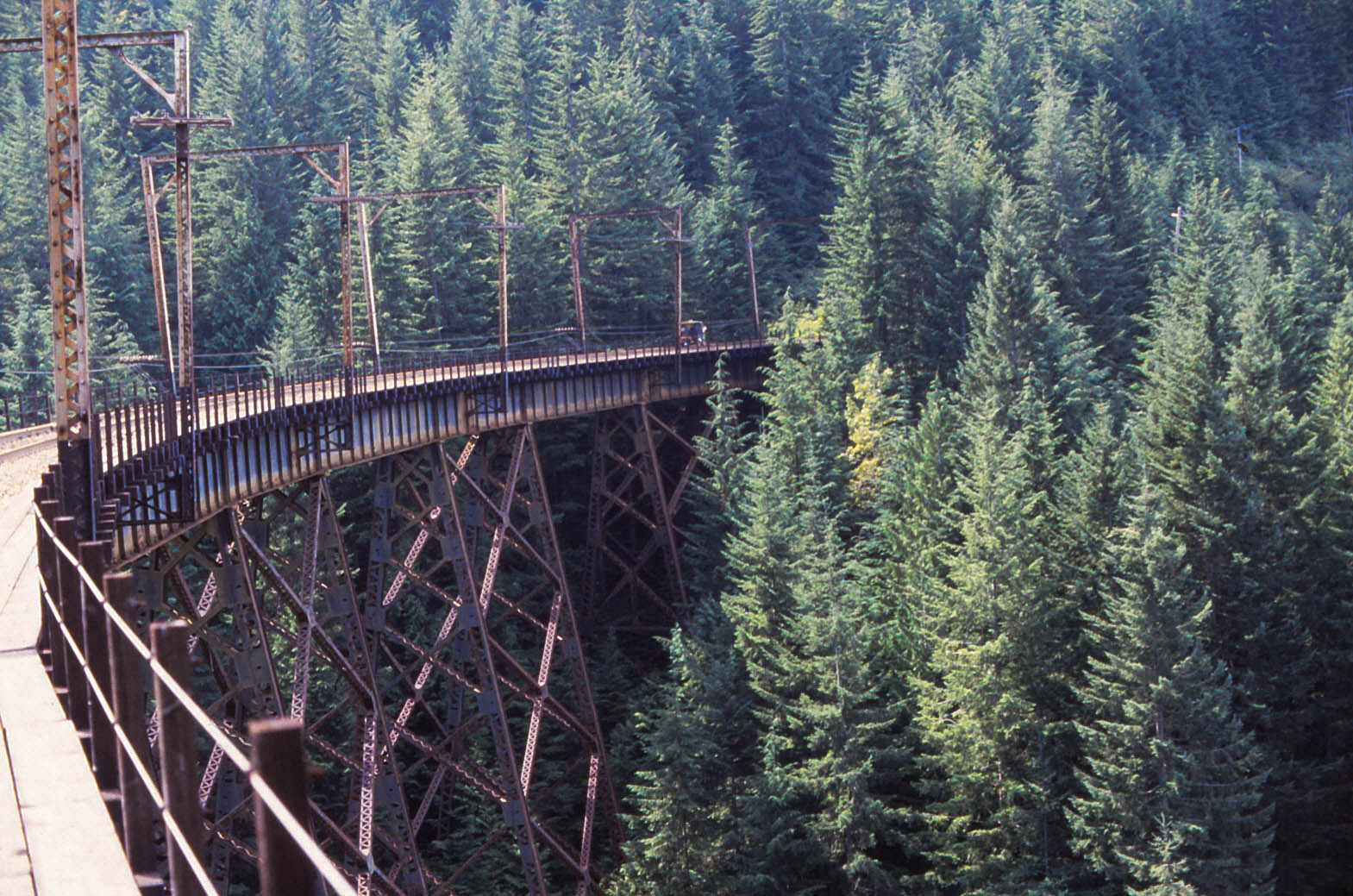 Along the western descent of Milwaukee Road's Snoqualmie Pass. Not much has changed today, aside from the line's removal. Even the catenary poles remain. Alan Freed photo.

Snoqualmie Tunnel never had this issue, even after electrified operations ended in 1971 along the Coast Division (Othello to Seattle) due to its relatively short length.

In terms of grades, Cascade Tunnel is not level inside like Snoqualmie, featuring a 1.7% grade. Also, grades are over 2% leading to the tunnel along the eastern and western slopes, much steeper than at Snoqualmie Pass.

Interestingly, Burlington Northern purchased the tunnel and a section of the line through Washington state after the Milwaukee Road abandoned operations in 1980 but why the railroad never decided to use the route to reduce maintenance costs and operating times remains a mystery.