The Northern Pacific's Stampede Pass was the railroad's crossing of the Cascade Mountains in western Washington State. It was the first railroad to do so while there would eventually be three major main line crossing the Cascades, the two others owned by the Great Northern and Milwaukee Road passed to north of Stampede.

Instead, officials elected to use the former Great Northern's Stevens Pass for all through movements.  Stevens is home to Cascade Tunnel, one of the most impressive feats of railroad engineering.

Unfortunately, its monumental length (7.9 miles) and ventilation problems resulted in eastbound trains having to wait up to 45 minutes at Scenic, Washington for the tunnel to be cleared of toxic fumes following westbound movements.

This factor, in addition to increased business resulted in successor BNSF Railway reopening Stampede to alleviate growing congestion in the 1990's.  While it has never reached capacity levels officials originally envisioned, the line remains an important artery today. 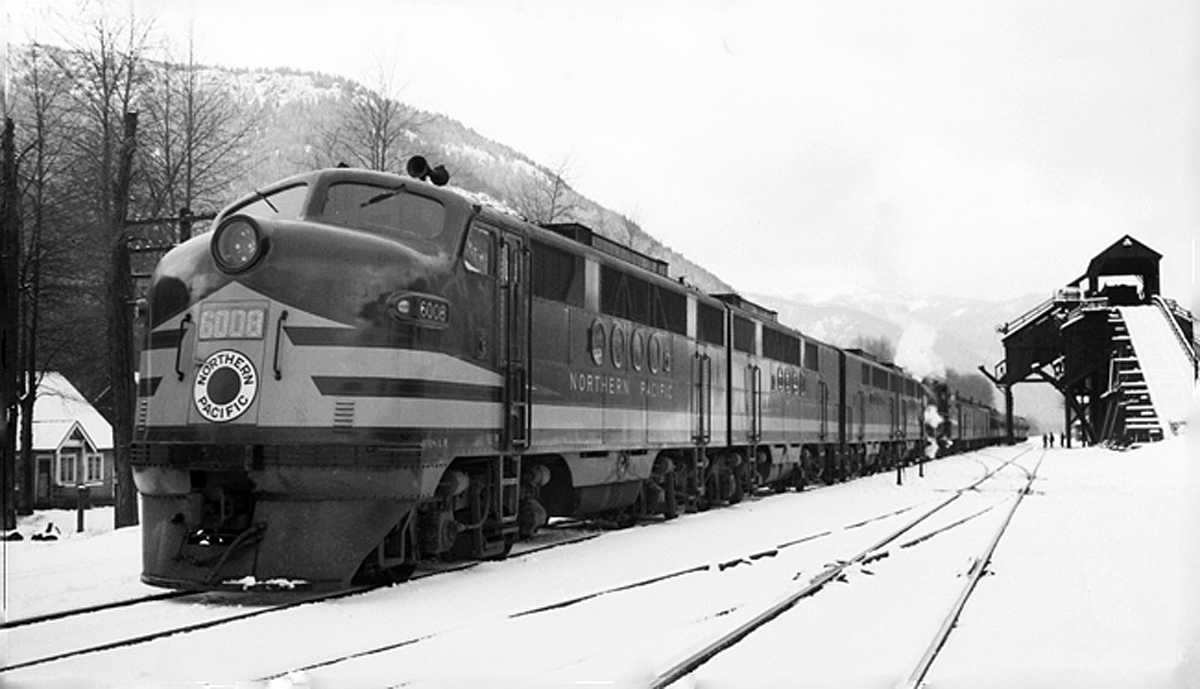 A perfect A-B-B-A set of nearly new Northern Pacific FTs led by #6008 couple on to the head-end of the eastbound Alaskan at Lester, Washington on March 31, 1945 to make the assault over Stampede. Ron Nixon photo/Museum Of The Rockies collection.

Perhaps what the railroad is best remembered for is its Ying Yang herald and its distinguished flagship passenger train, the North Coast Limited, which used a beautiful two-tone green livery.

The NP has its roots dating to the summer of 1864 when President Lincoln signed the railroad's creation by an Act of Congress and the Northern Pacific Railroad Company was born.

Construction on the new company began seven years later in 1870 and would roughly follow the expedition of Lewis and Clark who originally chartered the western territory in the early 19th century.

In early 1881 Northern Pacific civil engineer Virgil Bogue discovered Stampede Pass and it was eventually chosen as the most cost-effective means of crossing the daunting Cascade range.

While the railroad had a route opened to Seattle by 1886 it had yet to complete the tunnel, thus requiring the use of brutal switchbacks to scale the area. These switchbacks were as steep as 5.6% (meaning a rise in elevation of over 5 1/2 feet for every 100 feet traversed) in some areas. 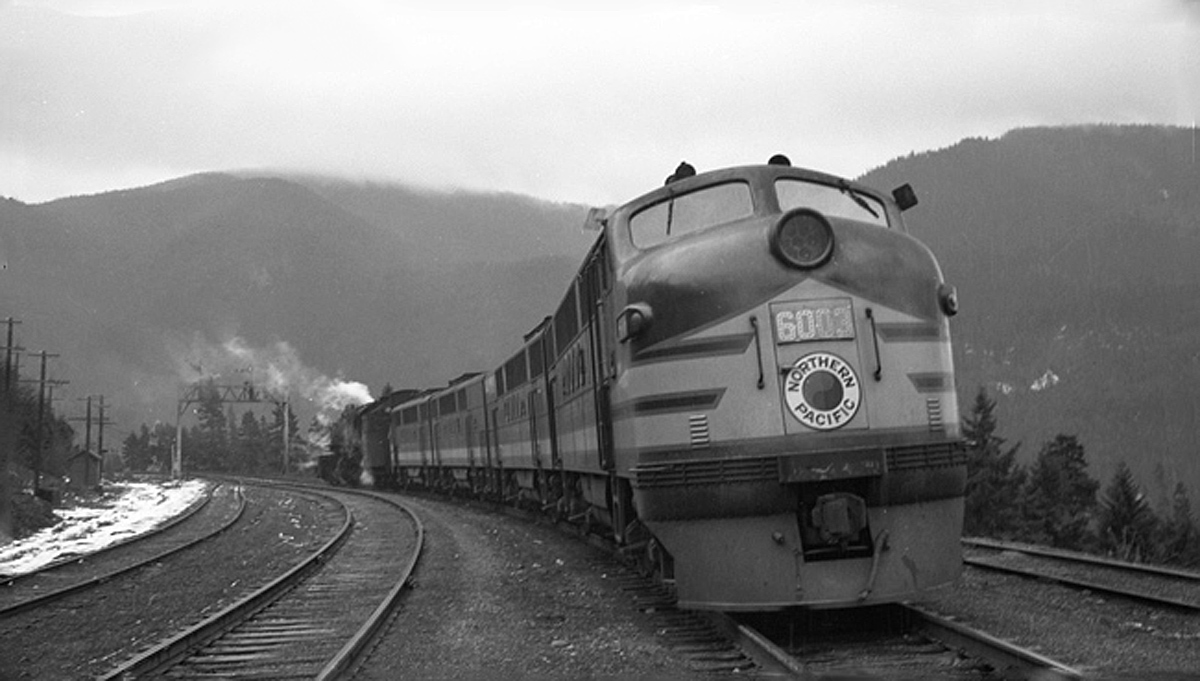 Another nearly new A-B-B-A set of NP FTs hooks on to Class Z-3 2-8-8-2 #4013 apparently as helpers to assist a freight train over the pass on February 11, 1945. Ron Nixon photo/Museum Of The Rockies collection.

To hoist freight and passenger trains over the pass the Northern Pacific purchased two massive 2-10-0 Decapods, the heaviest and most powerful steam locomotives in the world at the time.

Listed as Class M on the railroad's roster they carried the road numbers 1 and 2 and were built by Burnham, Parry, Williams & Company.

They weighed more than 135 tons and could produce nearly 35,000 pounds of tractive effort.   Work on the Stampede Pass Tunnel began in January, 1886 with contractor Nelson Bennett winning the contract to bore the tunnel under the pass.

A map of Northern Pacific's Stampede Pass (denoted in blue) and Tunnel, circa 1957. Also noted is Milwaukee Road's nearby Snoqualmie Pass. Author's collection.

While work on the tunnel started slow the state of art equipment Bennett used on the project, including air compressors, drills, narrow-gauge steam locomotives, and even an electric light plant allowed things quickly picked up whereby at one point up to 16-feet of new tunnel was being bored every day.

With more than 300 workers employed on the project it took just 2 1/2 years to complete the 9,850-foot long tunnel in May, 1888 (it opened officially on May 27).  For more reading about the pass please click here. 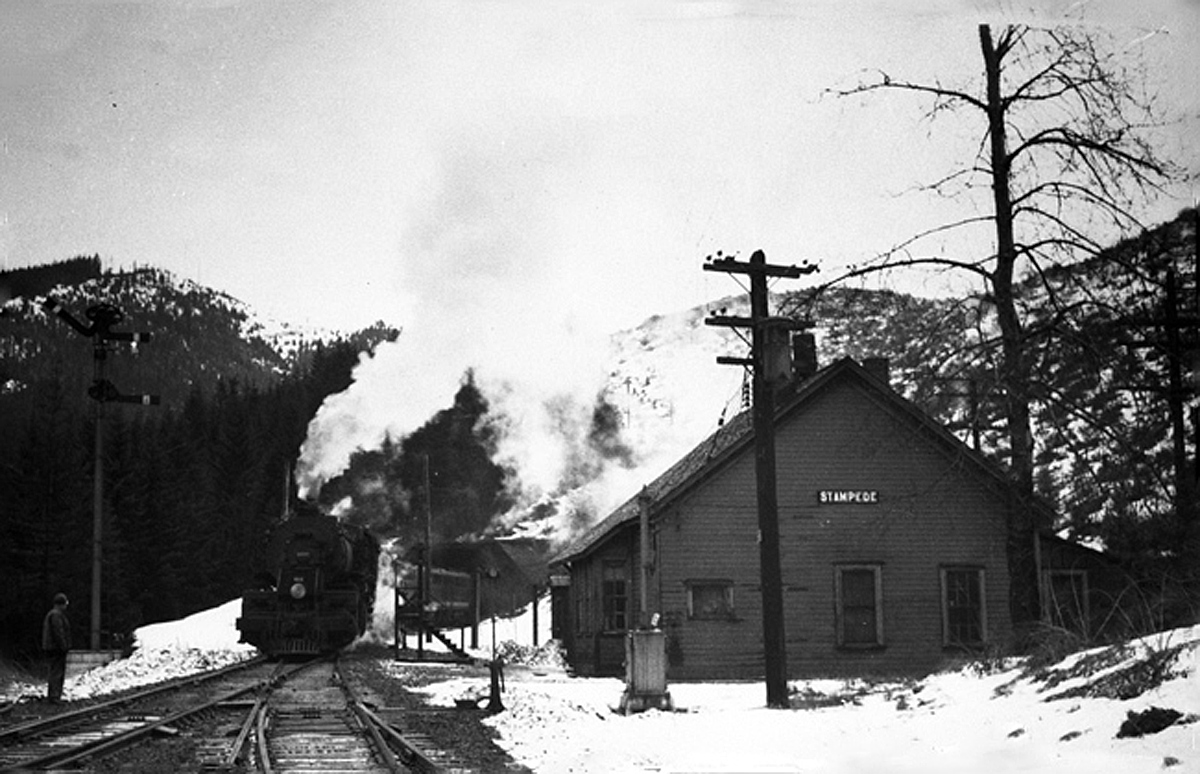 With the Northern Pacific now open all of the way to Seattle it also meant the dangerous switchbacks could be close although the railroad continued to use them for maintenance purposes for a short time afterward when the tunnel work was being done.

Overall the tunnel carried a maximum grade of 2.2% from both its eastward and  westward approaches. Just over 20 years after the tunnel was opened NP looked to have it double-tracked which was completed in 1915.

Of note for historical reference, while the tunnel carried a respectable grade the Milwaukee Road's Snoqualmie Pass directly to the north would be the West's best engineered route over the Cascades with a maximum grade of just 1.7%.

In the 1980s then Burlington Northern considered Stampede redundant with falling traffic levels and closed the pass to save on maintenance costs. 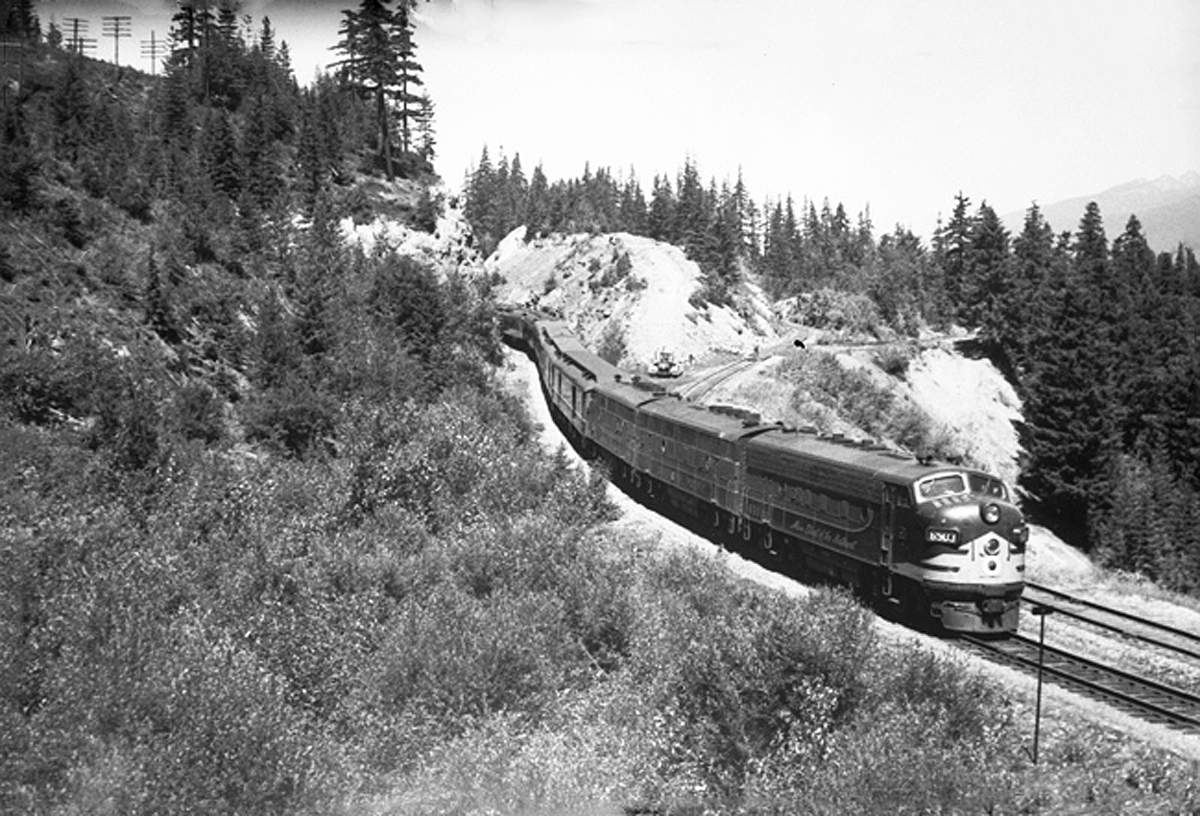 Northern Pacific's eastbound "Alaskan" is negotiating Stampede at Martin, Washington led by an A-B-A set of F3s with #6503 up front on July 16, 1951. Ron Nixon photo/Museum Of The Rockies collection.

However, between 1995 and 1996 successor Burlington Northern Santa Fe spent millions to reopen the pass and today it acts as a relief valve for the increased tonnage coming from the Port of Seattle.

Published by Washington State University the book provides a pictorial history of the NP's western lines where the author worked beginning in 1943.  You will see photos of steam locomotives and early diesels, as well as learn now the NP operated out west during that time.