One of the more impressive stone-arch bridges to ever be built in the United States was the Erie Railroad's Starrucca Viaduct, which spanned a small creek and valley in northeast Pennsylvania.

At the time of the bridge's construction, in the mid-19th century, railroads were still in their infancy and were not only just beginning to fan out from east coast cities but also were still developing the engineering techniques and skills required to build complicated and difficult projects like bridges and tunnels.

As such, it became no easy task for the Erie to span the valley located near what is now the small town of Lanesboro. However, with the help of a brilliant engineer and an unbelievable sum of money the bridge was completed in just over a year.

Today, as is so often the case with stone-arch viaducts, it remains in regular use by the New York, Susquehanna & Western, which leases the structure from Norfolk Southern. For many years, the viaduct was double-tracked as part of the Erie's New York - Chicago main line while today it only carries one track. 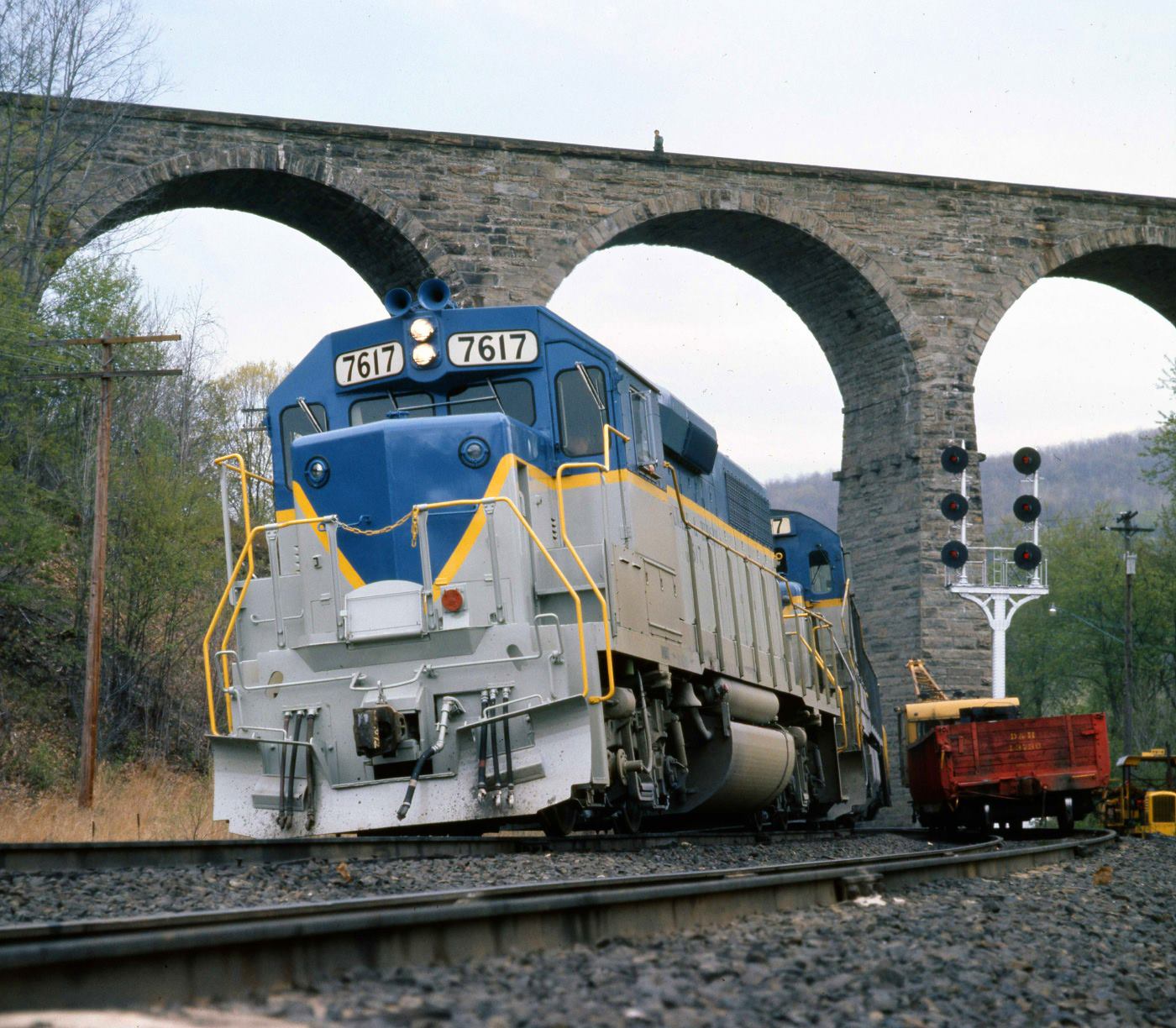 A new Delaware & Hudson GP39-2, #7617, which is still missing its nose shield, leads a northbound freight beneath historic Starrucca Viaduct at Lanesboro, Pennsylvania on the famed Penn Division (now abandoned) in May of 1976. Jerry Custer photo.

In addition, Lanesboro was once a major railfan attraction as Delaware & Hudson's Penn Division (ex-Delaware, Lackawanna & Western) was a busy corridor until the Conrail era.  This allowed ample opportunity to watch passing freights over both lines.

The Erie Railroad has its beginnings dating all of the way back to 1832, just five years after the Baltimore & Ohio Railroad, when it was chartered that year by the Governor of New York, De Witt Clinton as the New York & Erie Railroad (NY&E) to build a rail line in the southern part of the state linking Piermont, New York with Dunkirk on Lake Erie.

Having said that, gaining access to these new markets was a very labor intensive and difficult task because of two reorganizations (as the Erie Railway in 1859 and Erie Railroad in 1895) and a proxy fight by Cornelius Vanderbilt (of New York Central fame) to take over the Erie in the mid 1860s (which ultimately failed and the Commodore lost all of his holdings in the railroad).

A map of Starrucca Viaduct, circa 1965. Author's collection.

Building its way northwest from New York City the then NY&E came across Starrucca Creek, which lay in a wide valley that spanned about a quarter-mile. At the time the New York & Erie had a near limitless supply of funds as it was being financed by several wealthy British investors.

So, while money was not an issue, finding a way to practically cross the valley was a concern. At the time, and because railroad engineering was still in its youth, few engineers knew of a way to span the crossing.

At first the railroad discussed simply creating a giant fill across the valley but decided against it due to the cost and time involved. Then, the idea of using a bridge was discussed but it also became an issue since there simply wasn't anyone who knew how to design a structure with such height and length. 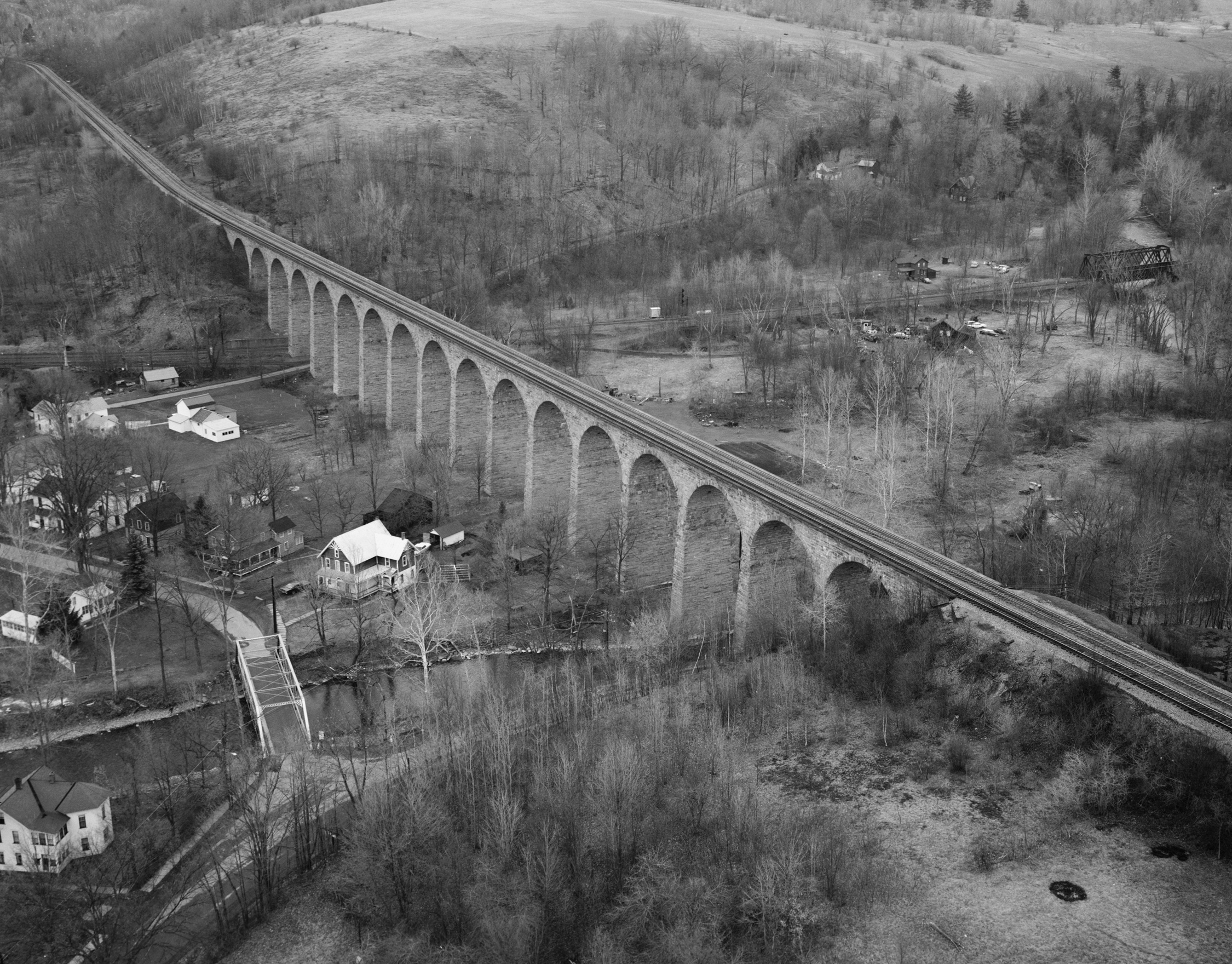 This birds-eye view of Starrucca Viaduct was taken during April of 1971 still showing the line's double-track status. Note the Delaware & Hudson's Penn Division below, also still active at this time. Jack Boucher photo.

However, the NY&E's chief contractor and bridge engineer of the time, Julien W. Adams, suggested that the railroad contact James P. Kirkwood (coincidentally who was also Adams' brother-in-law) who was a civil engineer working for the Boston & Albany Railroad during its construction.

Kirkwood was a Scottish who had immigrated to the United States in 1834 and not only worked for the B&A but also helped to survey western railroads as well. Upon learning of the NY&E's dilemma and visiting the area Kirkwood concluded that he could indeed build the bridge, which would be a cut-stone arch design, as long as the railroad did not have an issue with what the ultimate cost would be.

Almost immediately work began on what became known as Starrucca Viaduct (it gained its name, of course, from the creek bed it crossed) in 1847. The stone for the bridge was ashlar bluestone, locally quarried about three miles from the site and a temporary railroad was built from the mine to the site to transport the rock. 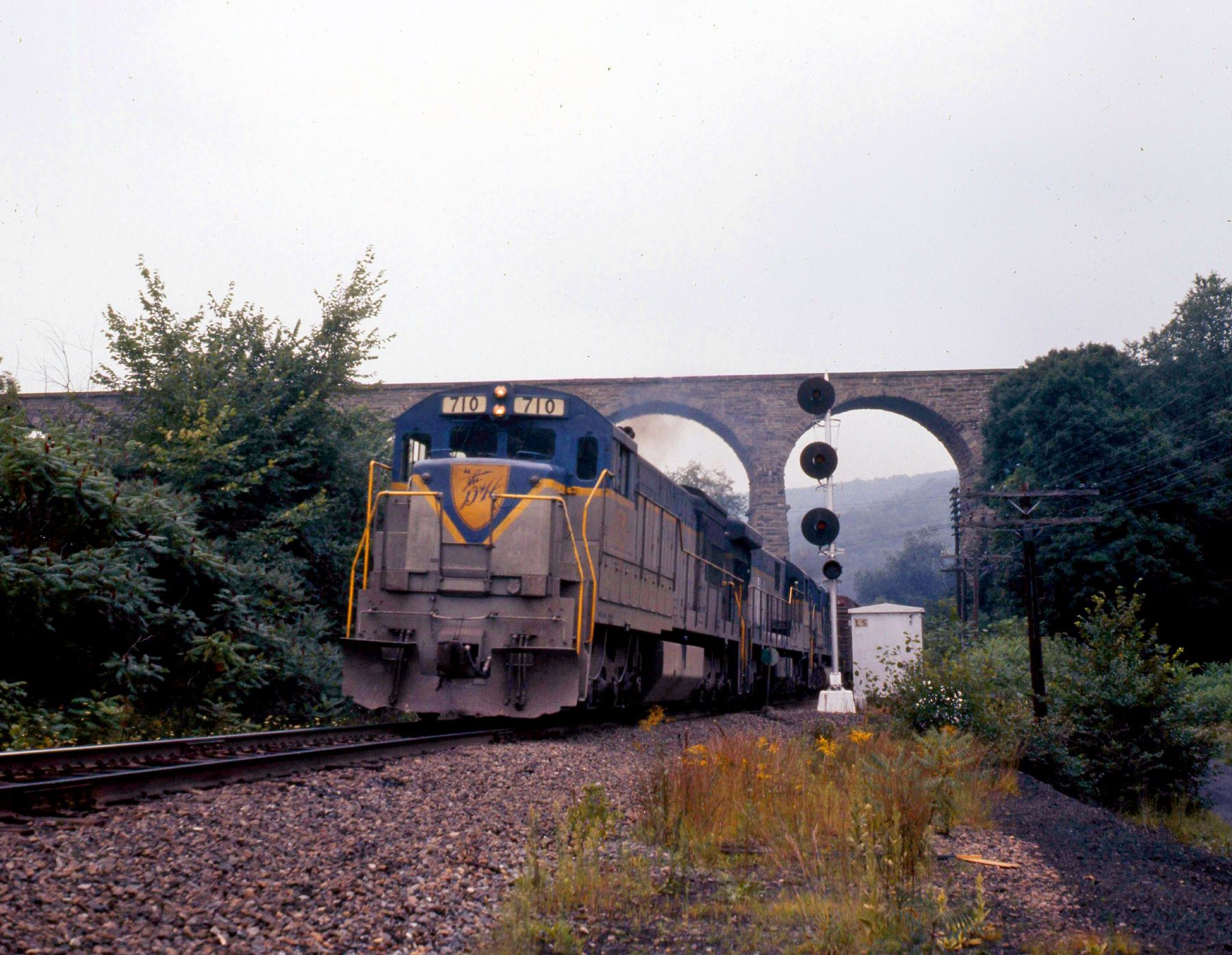 A pair of Delaware & Hudson's six-axle U-boats, and what appears to be an Alco unit, duck beneath Erie Lackawanna's Starrucca Viaduct along the now-abandoned Penn Division at Lanesboro, Pennsylvania during August of 1975. Jerry Custer photo.

Overall it took 800 workers (mostly of Irish descent) a little over a year to complete the bridge which priced out at $335,000, a staggering amount of money and the most expensive ever built up to that time.

The double-tracked bridge remained in regular use through the Erie's merger with the Delaware, Lackawanna & Western to form the Erie Lackawanna. When the EL became part of Conrail the new company continued to use the bridge until it came under Norfolk Southern control in June, 1999.

NS has since leased this section of the former Erie to the New York, Susquehanna & Western Railway and the bridge continues to see regular use today, more than 160 years since it was completed.  For further reading about the bridge's history please click here. 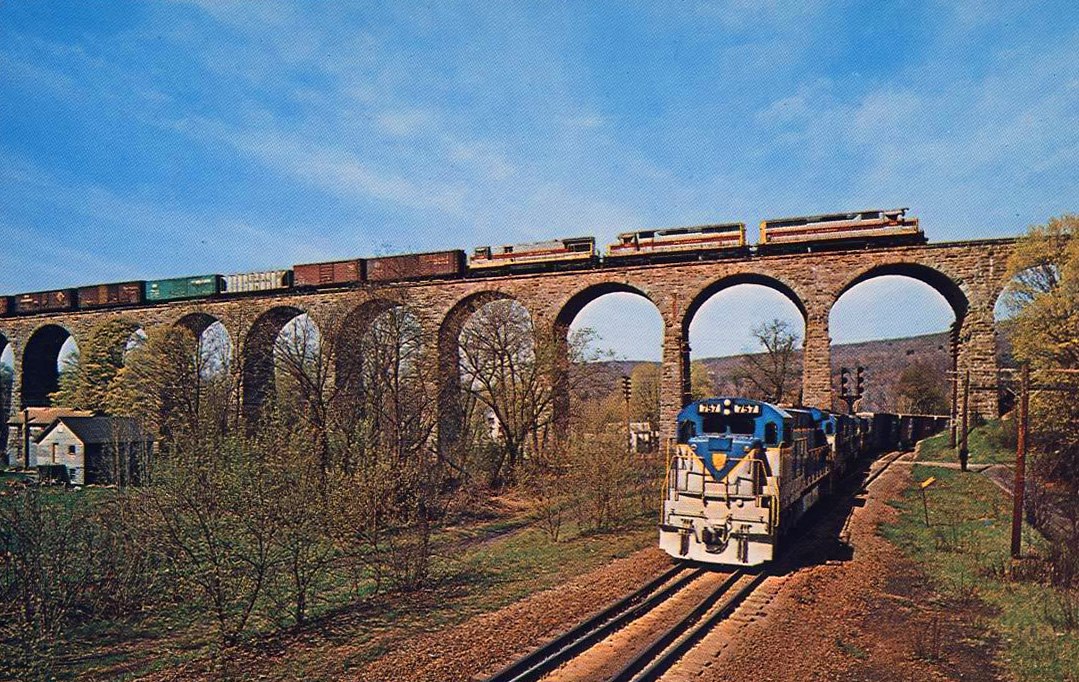 Those were the days... A Delaware & Hudson freight is on the fabled Penn Division as an Erie-Lackawanna counterpart passes overhead on historic Starrucca Viaduct at Lanesboro, Pennsylvania during the 1970s. Today, both roads are gone and only the viaduct still carries rails. Jim Shaughnessy photo.

When the Jefferson Railroad opened in 1872, connecting Carbondale, Pennsylvania with the Erie's main line at Lanesboro, operations here become much more interesting.  The little road had been chartered in 1864 and was entirely funded by the Erie.

Delaware & Hudson gained trackage rights over the route as an important through connection to Wilkes-Barre and Scranton.  While it was difficult to operate with stiff grades and sharp curves it provided interchanged with many of the fabled anthracite roads.

The line became part of the the D&H's famous Penn Division and Lanesboro offered a fabulous location to catch meets between Erie/Erie Lackawanna and D&H trains, as the latter passed beneath the former's Starrucca Viaduct.

Unfortunately, this all ended in the 1980s when the D&H purchased the former Lackawanna's Scranton-to-Binghamton mainline and diverted all traffic off the Penn in 1982.