The Tennessee Central was a classic fallen flag whose history was perhaps most closely associated with the New York, Ontario & Western.

The Nashville Route operated a circuitous and grade-ridden main line which could never compete against its surrounding neighbors.  In addition, it served limited markets; combined, these issues eventually forced into liquidation.

The TC's history begins in the late 19th century as the Nashville & Knoxville Railroad.

The early difficulties in even completing this project proved a precursor of things to come. The TC became a railfan favorite when it acquired a fleet of American Locomotive road-switchers in the 1950s, operating everything from RS3's to FA's.

It eventually owned a fleet of nearly all Alcos, save for a few Baldwins.  These first-generation locomotives, along with a handful of second-generation models, comprised its power needs until shutting down in the late 1960's.

Today, what is left of the Tennessee Central is operated by Class I, Norfolk Southern, and short lines, Nashville & Eastern/Nashville & Western. 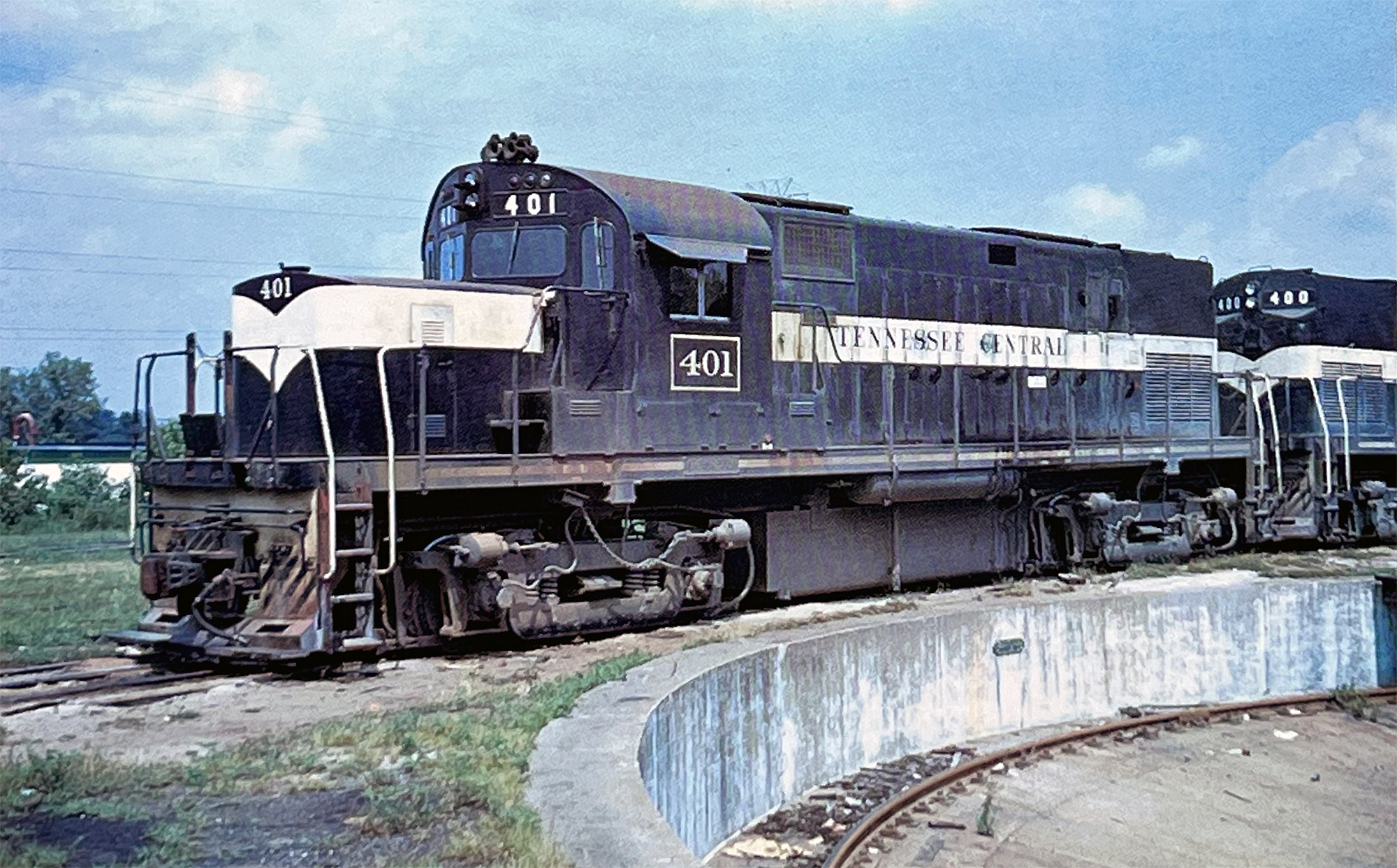 As Dr. George Hilton's points out in his article, "Tennessee Central," from the January, 1946 issue of Trains Magazine the history of the TC began with the chartering of the Nashville & Knoxville Railroad in 1884.

It was the idea of Alexander Crawford to link both cities in handling predominantly coal between those points, including an outlet connection with the Cincinnati Southern Railway.  Construction began in 1888 and by 1894 the N&K had opened 76 miles between Lebanon (near Nashville) and Monterey (about the midway point) before Crawford's untimely death.

The new railroad quickly ran into financial issues following his death and the project stalled.  There was no further construction and the property was eventually purchased by Jere Baxter who had chartered the Tennessee Central Railroad (August, 1893).

He held the same aspirations as Crawford, connect Knoxville with Nashville, and the N&K would aid him in this endeavor.  Following reorganization as the Tennessee Central Railway in 1897 the new operation completed an eastward extension from Monterey to Emory Gap by 1900.

This left just 54 miles in reaching Knoxville.  Alas, a direct entry into the city could never be obtained (Harriman proved its eastern terminus) and the railroad was forced to rely on a connection with the Cincinnati Southern (this property, owned by the city of Cincinnati, was for many years leased by the Cincinnati, New Orleans & Texas Pacific Railway, which itself was controlled by the affluent Southern Railway).

Despite the setback, Baxter was able to achieve additional growth to the east; through 1904 he added coal branches to Wilder, Isoline, and Fall Creek (all of these spurs were between two and twenty-one miles in length). 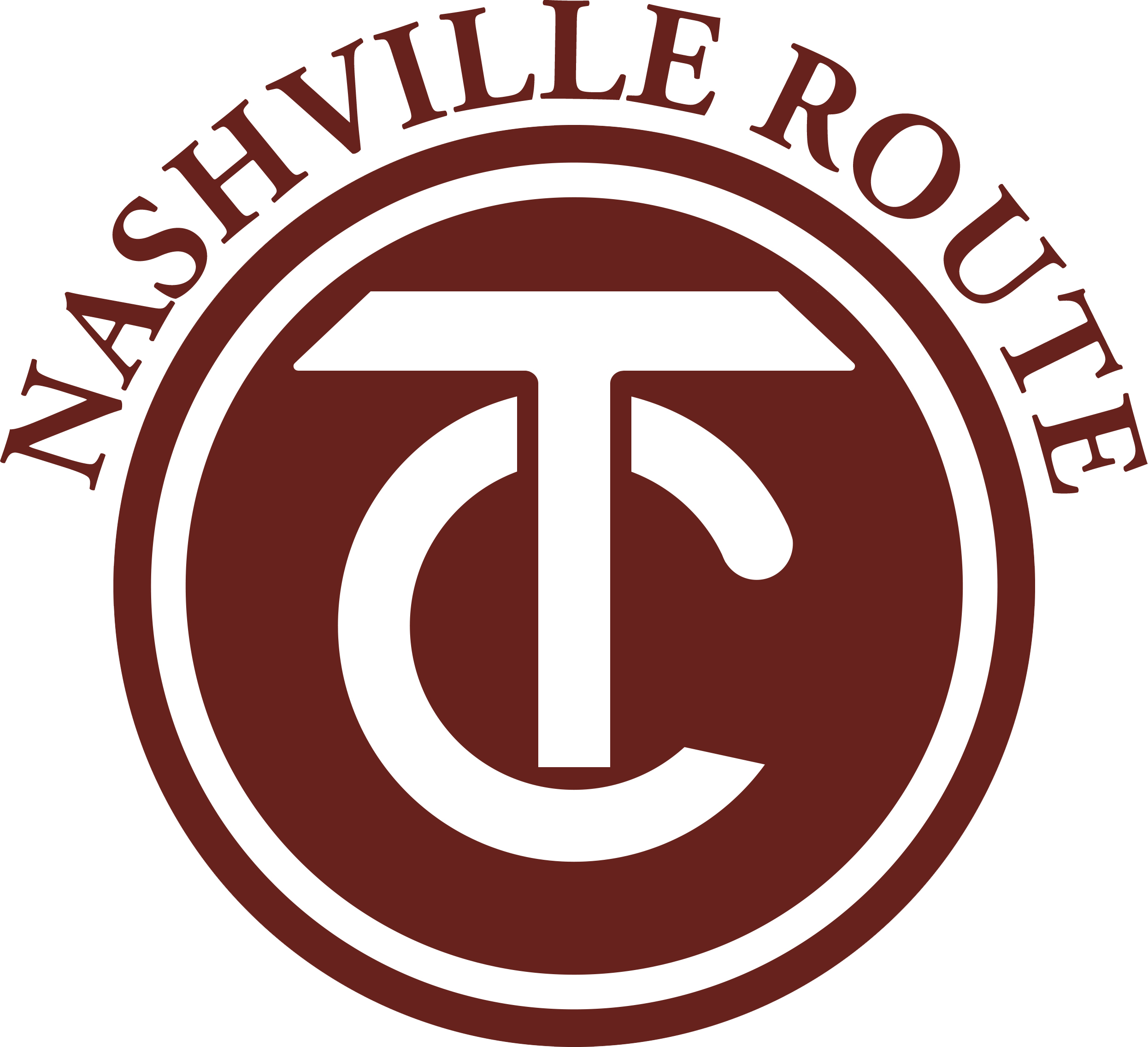 As this project was ongoing he reached Nashville in 1904.  The results of this move put some pressure on the established Louisville & Nashville although the larger road was successful in brushing off attempts of Baxter in reaching the downtown area. Beyond the Music City he pushed rails further westward.  The last significant component of the Tennessee Central was the Nashville & Clarksville Railroad.

Acquiring this property offered access into southern Kentucky at Hopkinsville and a connection with the Illinois Central. Once again, tragedy struck when Baxter passed away in 1904 and once the company was wrought an uncertain future.

He had brought greatly needed vision and leadership, the loss of which was quite unfortunate.  In June of 1905 the company was leased to the Illinois Central, Louisville & Nashville, and Southern which operated various segments until the railroad returned to private operation in 1908. This lasted for only a few years when bankruptcy found the Tennessee Central again in 1912.

Here it remained until 1922 when a group of investors purchased the property and kept the corporate name.  The group was led by Hugh Wright Stanley, who already held experience in railroad management.

Under his guidance the Tennessee Central was turned into a modern and respectable operation that posted profits for the first time in its history. 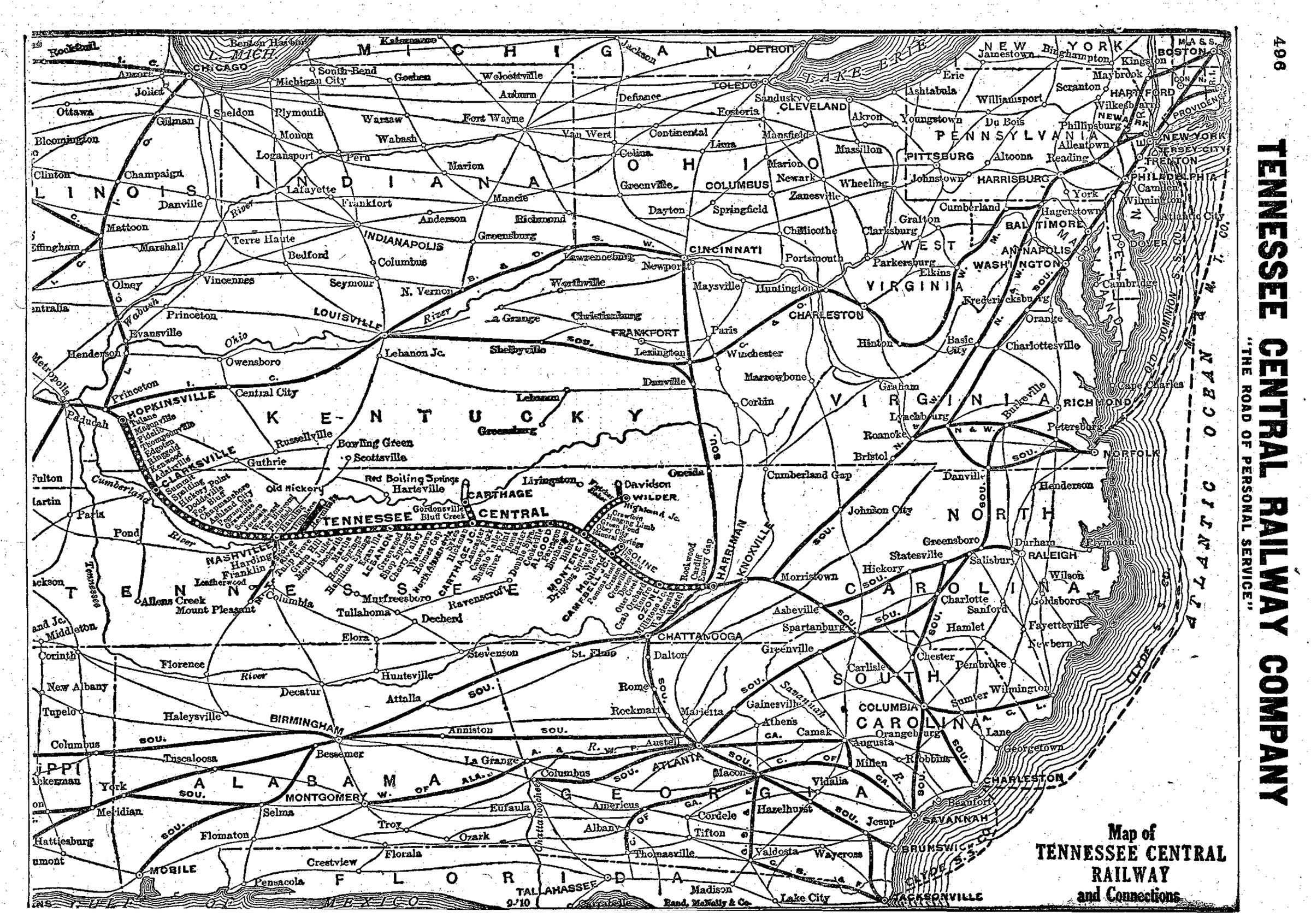 Stanley remained at the TC for 32 years and under his watchful eye the railroad saw one last extension, a branch from Stone River (near Nashville) to Old Hickory along the Cumberland River which eventually served a prominent DuPont chemical plant. His astute management was best on display following the Great Depression.

At first the market's collapse severely impacted the company negatively.  However, by 1934 it was again posting profits and continued to so through the postwar years. 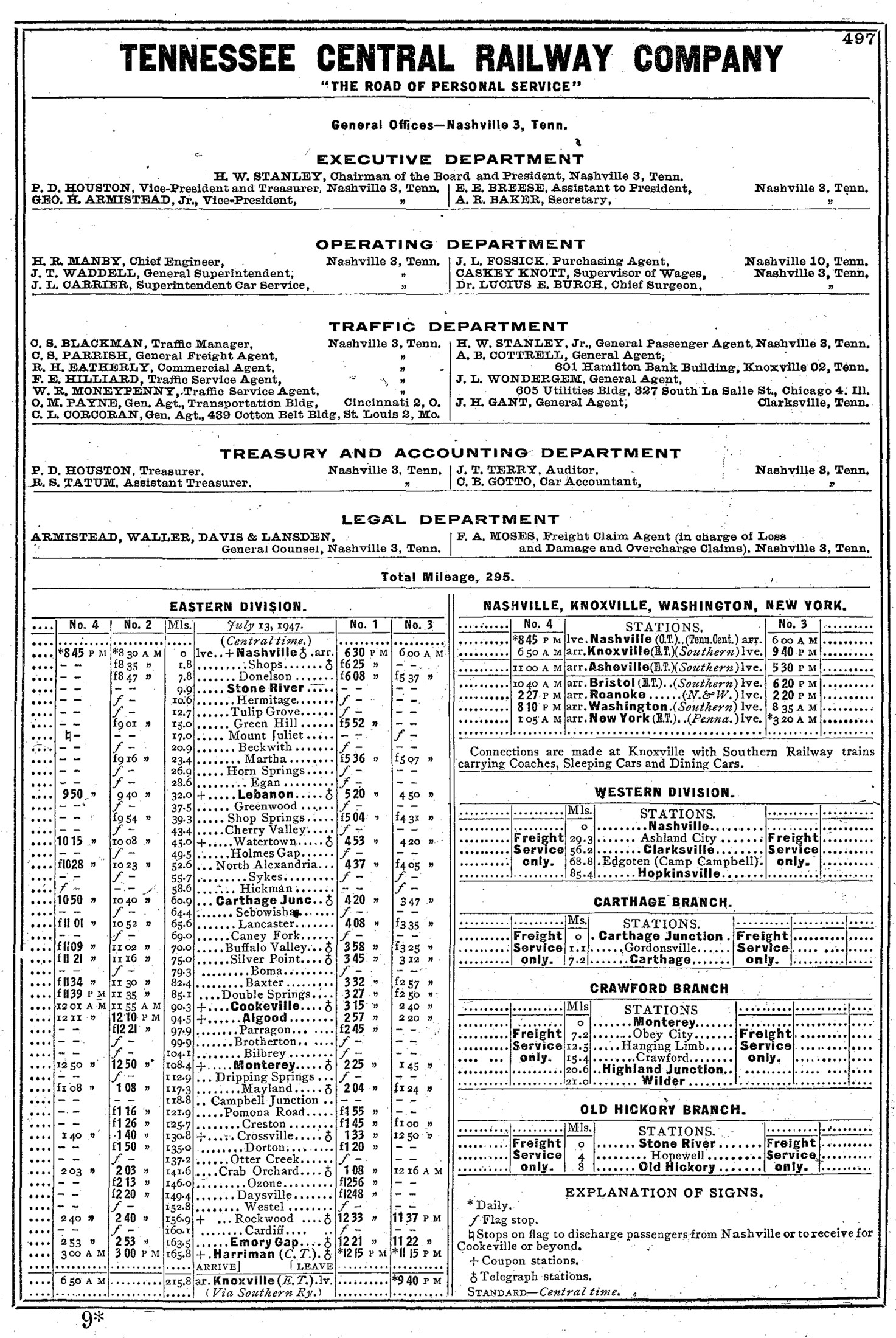 Coal had played a major part in this and tonnage increased when the Tennessee Valley Authority opened its Kingston Steam Plant near Harriman in February of 1954.  Alas, the success was short-lived.

The TVA partnership carried on for only a few years when the company opened contracts with other mines not served by the railroad.  As Dr. Hilton notes as early as the immediate postwar period coal had actually been in decline.

During peak periods, 50% of TC's originating traffic had been black diamonds but by the mid-1940's it relied primary on interchange business (75%), acting as a bridge carrier in this regard.

Additionally, mines it had served for several years were playing out and, sadly, by 1960 was again posting deficits.  In 1955 it managed to discontinue its remaining, albeit modest, passenger services.

As the red ink deepened it tried to diversify traffic by moving other freight, such as trailer-on-flat-car movements (TOFC) and in its desperation even contemplated introducing passenger trains once more.

While profitable, piggyback movements accounted for only a fraction of its annual tonnage ($50,000) and by 1967 deficits had mounted to an alarming $10 million, including a $4.5 million loan owed to the government since 1950.

In a move not surprising to many the railroad filed for bankruptcy on January 14, 1968.  As liquidation loomed the state of Tennessee tried to save the property but the attempt was vetoed by Governor Buford Ellington.

The Tennessee Central Railway quietly wrapped up operations on September 1, 1968.  Following the Alco road's shutdown segments were acquired by the IC, Southern, and L&N.

The above steam locomotive roster information is courtesy of Dr. George Hilton's article, "Tennessee Central," from the January, 1946 issue of Trains Magazine.

During the steam era it had utilized quite powerful wheel arrangements, needed in the movement of coal.  These included such designs as the 4-8-2, 2-8-2, and even big 2-6-6-2 Mallets purchased secondhand from the Norfolk & Western.

It was the diesel era, however, that really drew in railfans with a roster of Alco models ranging from RS3's and RS36's to FA's and C420's; there were even three Baldwin DRS-4-4-1000's in use at one time (later sold).

In the spring of 2016 it was announced that Nashville, Chattanooga & St. Louis 4-8-4 #576 would be restored by the Nashville Steam Preservation Society to host excursions on the 108-mile Nashville & Eastern.

This big "Dixie" (Class J-3) is the last of her kind and if the group is successful their efforts will likely draw large crowds with Nashville located nearby.

(Thanks to Gary W. Dolzall's "The Tennessee Central Story, Part 1" from the September, 1987 issue of Trains for additional assistance with this article.)