The Denver & Rio Grande Western's Tennessee Pass north of Salida and Leadville, Colorado was a means for the railroad to reach Salt Lake City, Utah through a standard-gauge route rather than a narrow-gauge line it already had in place west of Salida.

This new route was a bit circuitous in that it headed north before returning to a westerly direction. However, it allowed the railroad to directly interchange lucrative traffic. The value of the line ebbed and flowed over the years but after the Union Pacific merger of 1996 it redundant due to its stiff grades and north/south heading.

Today, the line lies dormant although it remains under UP ownership. The future of Tennessee Pass may be altered drastically if a limited liability company, KCVN, LLC (and their subsidiary, Colorado Pacific Railroad) is successful in acquiring the 228-mile line from UP.

The proposal was first announced in November, 2019 as the group is interested in running grain shipments over the corridor.  The mileage would include the Dotsero to Parkdale, Colorado segment as well as trackage rights into Pueblo.

The group originally offered $10 million for the line (its liquidation value) but UP has balked at the proposal.  The railroad is also attempting to sway the Surface Transportation Board into denying the KCVN's attempt to acquire the property through legal wrangling that insures rail service.  Interestingly, this attempt ultimately fell through. 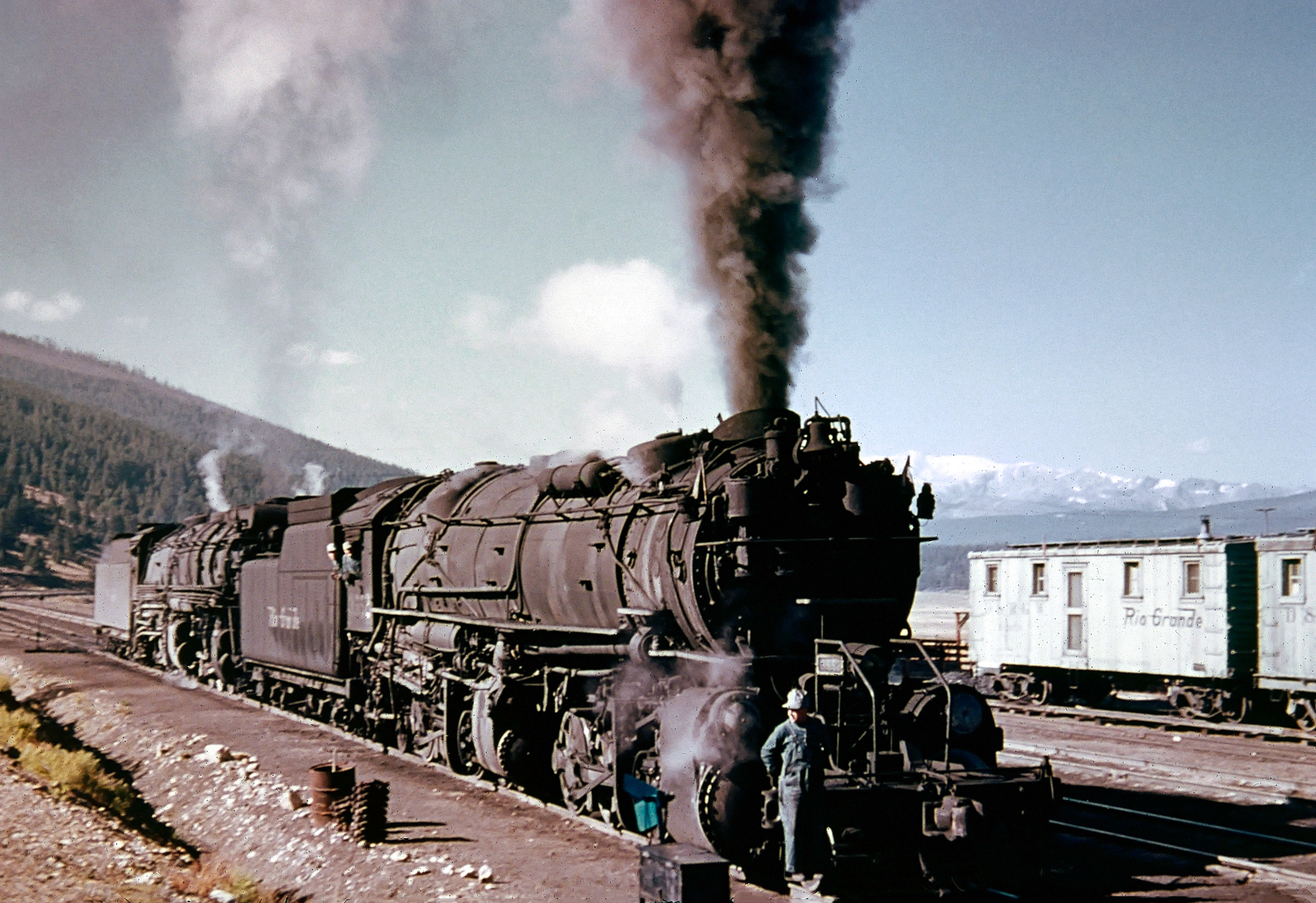 The Denver and Rio Grande Western Railroad, also known as simply the Rio Grande, is one our country's most famous railroads.

Its speed-lettering herald is likewise one of the most recognized of all time and people continue to flock to its scenic routes to travel trains such as the California Zephyr and the Durango & Silverton, perhaps the most famous tourist line in the country which operates several miles of the D&RGW's former narrow-gauge trackage in southern Colorado and northern New Mexico.

While the railroad officially became a fallen flag in 1996 when the Union Pacific took over the Southern Pacific the railroad's identity had mostly disappeared before that when its parent company Rio Grande Industries purchased the SP in 1988 and began consolidating D&RGW operations into the much larger railroad.

Before the Rio Grande was able to acquire the Moffat Tunnel, construct the Dotsero Cutoff, and reduce significantly reduce operating times and grades it had to find a cost effective means over the Rocky Mountains.

Then known as the Denver & Rio Grande the railroad only had one means of connecting Denver with Salt Lake City, a narrow-gauge route it had opened between Salida, Montrose, and Grand Junction in 1883.

While effective in opening a transportation artery between the two cities the route was hampered due to its narrow-gauge status, thus limiting the amount of traffic which could be interchanged with other standard-gauge lines (by the 1880s, most main line across the country had converted to standard-gauge). 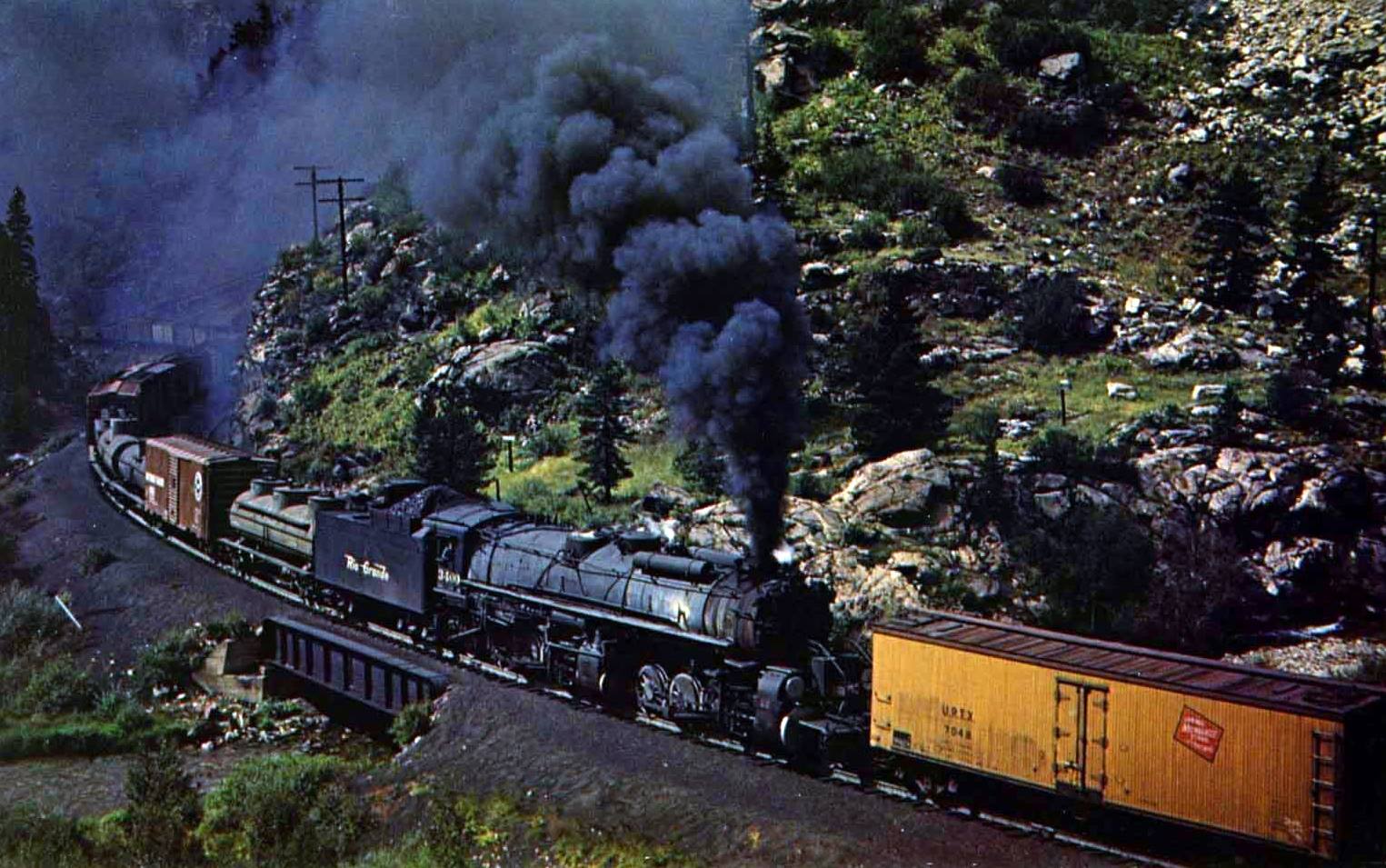 Back in the day, on Tennessee Pass... Rio Grande 2-8-8-2 #3400 works as a mid-train helper battling the grade near Red Cliff, Colorado with an eastbound manifest in 1950. Robert Le Massena photo.

To alleviate this issue the D&RG began looking at the prospect of constructing a new route over the Rocky Mountains, eventually choosing a heading north of Leadville and following the Colorado River. Ahead of building this new line they upgraded their route between Denver, Pueblo, and Leadville to standard gauge as well.

In the late 1880s construction began with the hardest section to complete the Tennessee Pass Tunnel. In 1890 the D&RG was able to complete the new line to its previous connection at Grand Junction, Colorado (where it connected with the Rio Grand Western that reached Salt Lake City) and around the same time its original tunnel over the pass opened at an elevation of 10,239 feet. 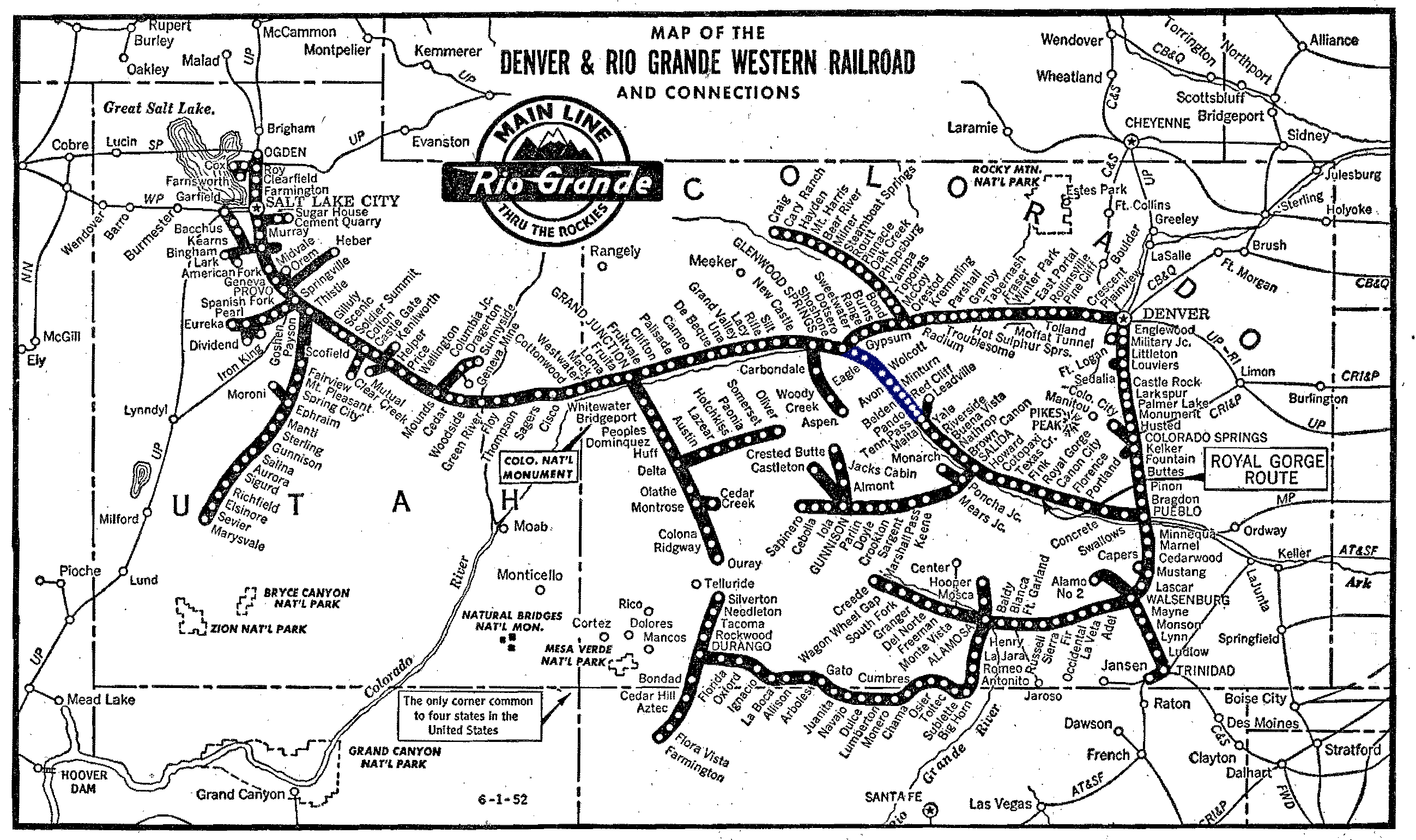 A map of Tennessee Pass (highlighted in blue) from the Rio Grande's 1952 system map. Author's collection.

Grades remained above 3% in some areas but the line was entirely standard-gauged and allowed the D&RG to pick up lucrative interchange traffic heading west from Denver and east from Salt Lake City. In 1945 the then Denver & Rio Grande Western constructed a new tunnel at around the same altitude as the original.

It was just 2,550 feet in length and while it contained a 3% grade on the westward approach the eastward heading contained just a 1.5% grade.  In 1931 the D&RGW took control of the Denver & Salt Lake Railway whose claim to fame was constructing the massive 6.21-mile Moffat Tunnel that had opened in 1928.

This route was just north of Denver and allowed for a much more direct connection with Salt Lake City after the D&RGW completed the Dotsero Cutoff. As such the Tennessee Pass Tunnel and route southward through Leadville became the railroad's secondary main line to Denver. 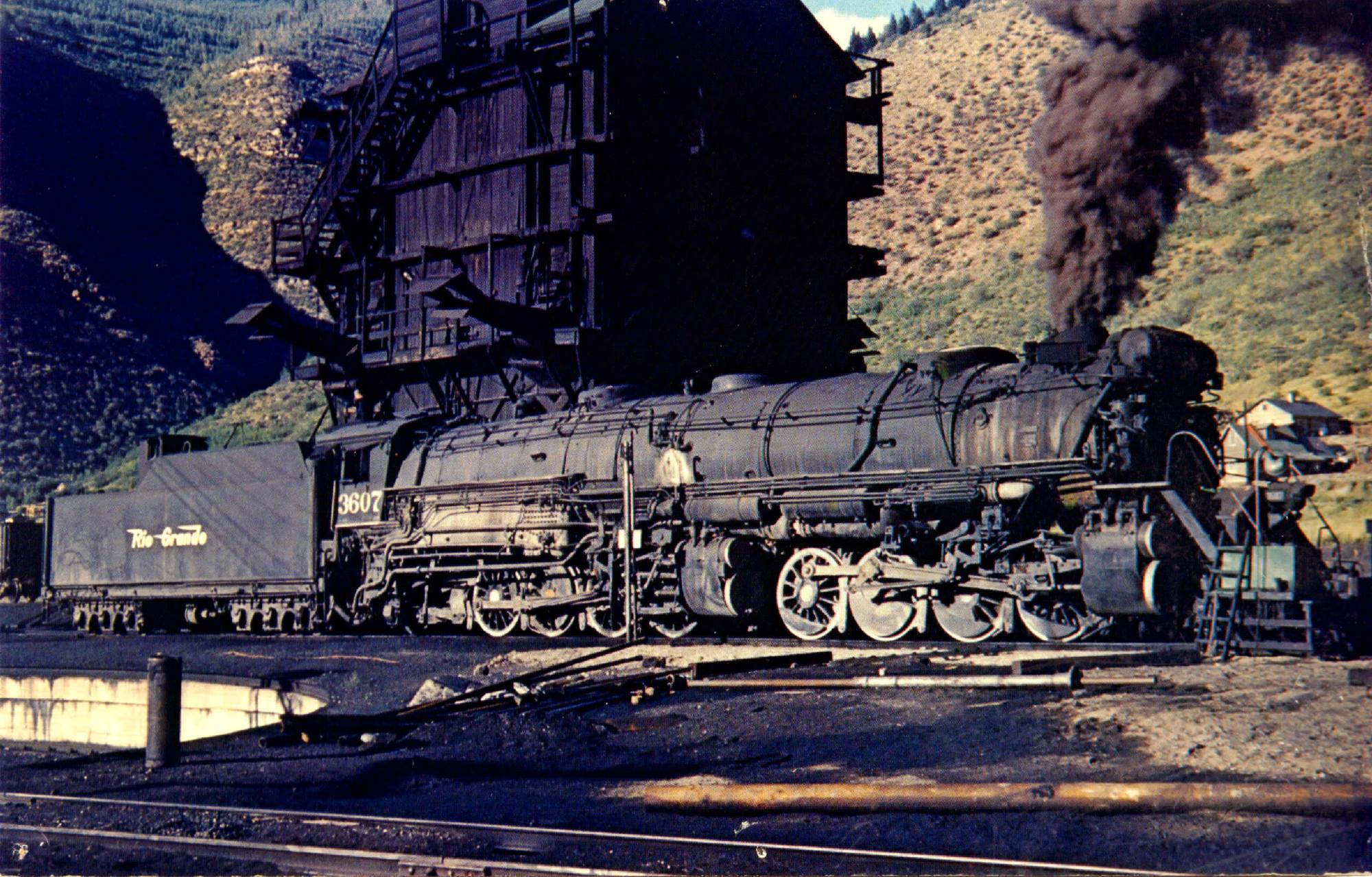 However, the route gained new importance after the Southern Pacific merger of 1988 due to the increased traffic coming from western points like the ports of California.   Once Union Pacific purchased the SP in 1996 this newfound life for the pass came to an end.

With UP now owning both the SP and D&RGW lines it had no use for the route as all traffic movements could be handled through Moffat Tunnel.   Because of this, a year later in August, 1997 UP mothballed the line through Leadville.

While initially wishing to outright abandon the line realizing a competitor such as then Burlington Northern Santa Fe may step in and purchase the route the railroad decided to retain the line, which it still owns today. Whether the route ever sees trains again will likely be dependent on the demand for rail in the future, as Moffat Tunnel is currently near capacity with more than two-dozen trains passing through it every day.

Interest in reviving Tennessee Pass first began in November, 2019 when a group known as KCVN, LLC, through their subsidiary, Colorado Pacific Railroad, wanted to reopen the corridor for both freight and passenger service.

Union Pacific apparently had no interest in this group operating the long dormant line.  Instead, in early 2020 it was accidentally disclosed that UP had been in discussion with Rio Grande Pacific about leasing the corridor with the intent of hauling 400,000 barrels of per day of raw crude oil handed from Utah's Uinta Basin via the Uinta Basin Railway.

“We look forward to engaging in the transportation planning work already underway to determine how the Tennessee Pass Line might play a role. It’s exciting to bring this additional option to the table.”

The CM&P stated it would lease 163.1 miles of the Tennessee Pass between milepost 171.9 at Parkdale, Colorado to Milepost 335.0 near Sage, Colorado.

The company believed its annual revenue will not exceed $5 million and will aggressively pursue interest in freight and passenger service along the route.

Unfortunately, this attempt also ultimately fell through and the corridor still remains under Union Pacific ownership.