Those who live in southern Ontario, or once did, likely remember a system known as the Toronto, Hamilton & Buffalo Railway (reporting marks, THB).

The company dated to the early 1890s and connected all three of its namesake cities although only one, Hamilton, was actually reached via its own lines.

For much of its operational existence the TH&B was jointly owned between two Class Is, the Canadian Pacific and New York Central, both of which owned their own routes through the region as well.

When the railroad was first chartered it was meant as an alternative for southern Canadian shippers to reach across the Canadian/United States border to Buffalo but its independence lasted only a few years.

Following the failure of the Penn Central in the early 1970s the CP acquired most of the TH&B which spared the line from becoming part of the later Conrail.

While remaining a separate entity for more than a decade, it eventually disappeared into CP in the late 1980s. 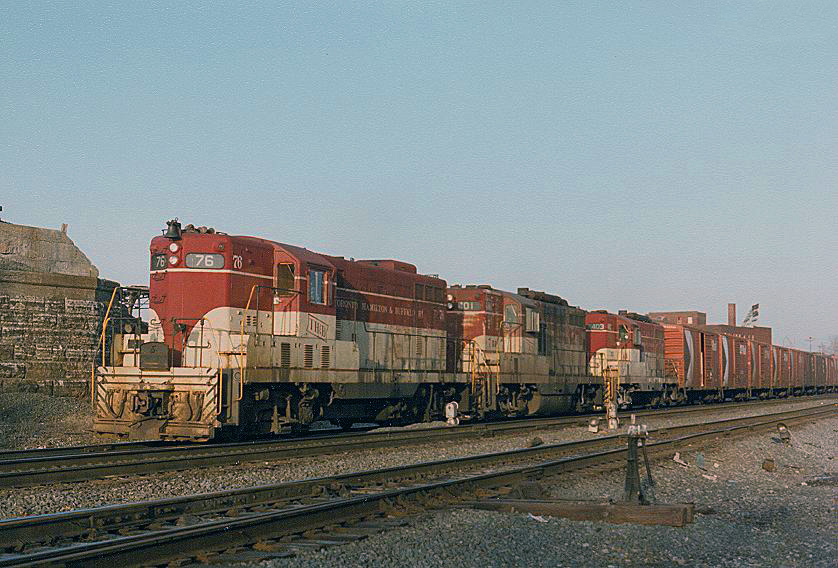 Toronto, Hamilton & Buffalo GP7 #76, along with GP9s #401 and #403, head out of Buffalo's Frontier Yard with westbound freight BUCP on the evening of February 26, 1983. The train is bound for Toronto via trackage rights over Canadian Pacific. Doug Kroll photo.

The Toronto, Hamilton and Buffalo Railway was created by an act of the Ontario Legislative Assembly when it was chartered in 1884.

However, the stipulations of its incorporation required that it could not interchange, lease, or merge with any other railroad, which severely limited the line's viability as a for-profit company.

Interestingly, the TH&B began actual operations by taking over the bankrupt Brantford, Waterloo & Lake Erie Railway in 1892, an 18-mile system that operated between Brantford and Waterford, Ontario located to the west of Hamilton. 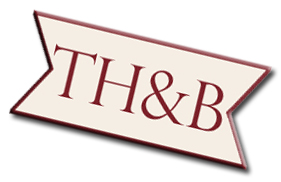 In October, 1894 newly constructed tracks totaling 25 miles opened to Hamilton, which became the railroad's headquarters, and the city's leaders declared that the company's continued expansion eastward would use a routing south of the Niagara Escarpment, a mountain-like ridge that split the city in-two.

This section of the TH&B proved to be the toughest from an operational standpoint as its line was forced to climb the ridge out of the city; eastbound moves to Welland (which the railroad reached by December 30, 1895) traversed 1.04% grade, covering 216 feet in only 4.41 miles.

For those westbound trains heading away from Hamilton towards the western terminus of Waterford the climb was a stiffer 1.5%.

By late 1895 the TH&B's route was essentially complete as its purchase by the Canadian Pacific and New York Central that year precluded further expansion to Buffalo or Toronto; it simply used its parents' routes to reach these cities (CP between Hamilton Junction and Toronto and NYC between Welland and Buffalo/Niagara Falls).

The railroad did, however, construct two short branches from its main line; between Smithville and Port Maitland (19 miles in length) as well as from Welland to Port Colborne. 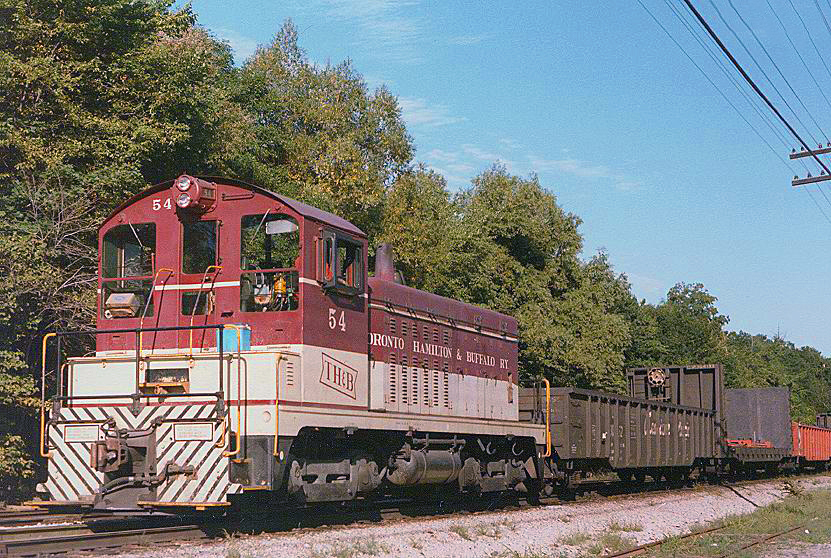 Toronto, Hamilton & Buffalo NW2 #54 moves a cut of cars through Kinnear Yard in Hamilton, Ontario on September 1, 1984. The shortline owned nothing but Electro-Motive products during the diesel era which included Geeps and a few models of switchers. Doug Kroll photo.

In all, the Toronto, Hamilton and Buffalo Railway's total system was roughly 110 miles in all. During its first thirty years of service standard power included:

Typically, the TH&B's freight movements headed east into the United States, which meant trains had to battle the grades around Hamilton.

However, by 1925 the 2-8-0s were growing insufficient to lug heavier and heavier freights up and out of the Niagara Escarpment.

It became obvious the larger steamers would be needed but Canadian lines, in general, did not operate wheel arrangements much larger than 2-8-2 Mikados, 2-10-2 Santa Fes, or 2-10-4 Texas Types. 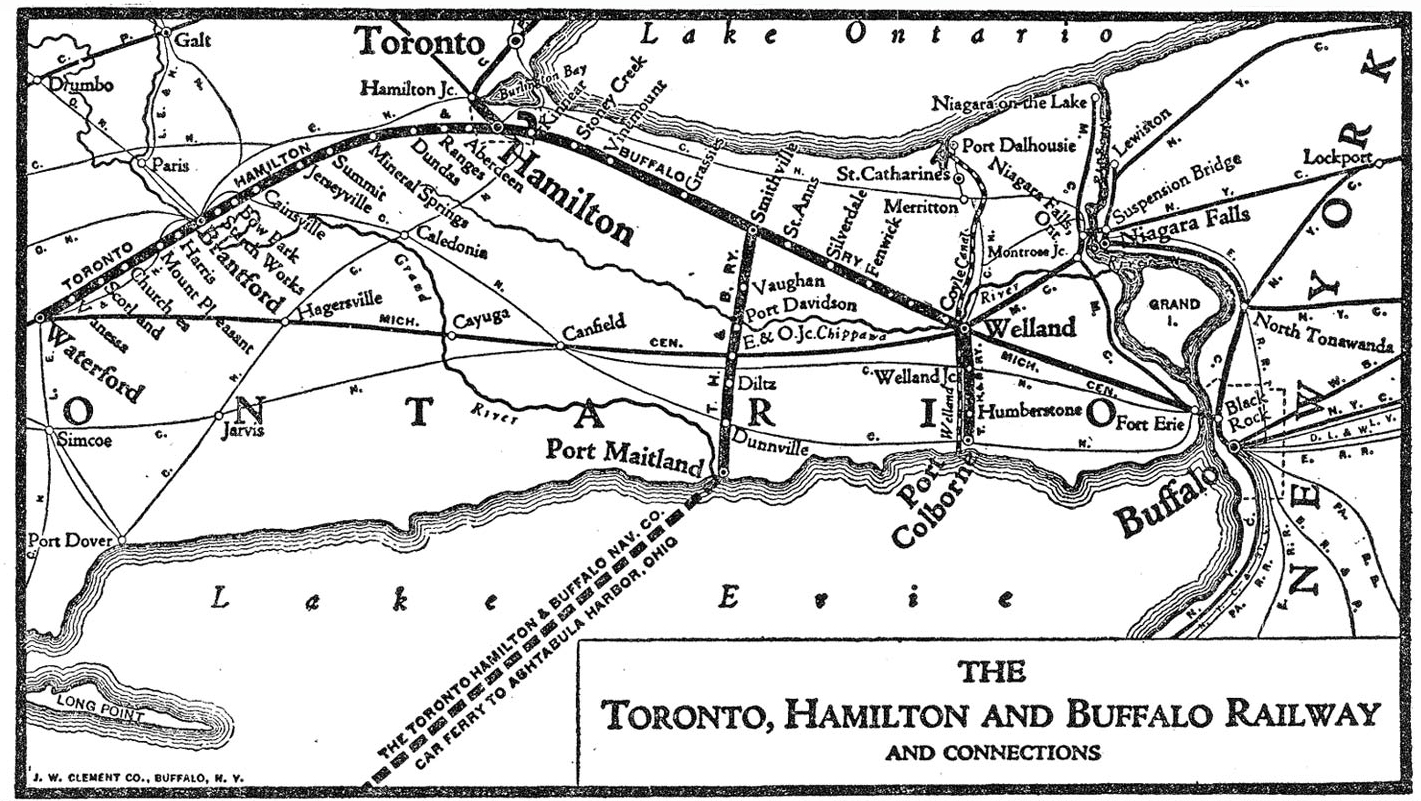 TH&B management was looking at the 2-8-4 Berkshire which was a favorite of parent NYC although the locomotive was not in construction by any Canadian builder.

The railroad was able to likewise convince Alco's Canadian arm, the Montreal Locomotive Works, to acquire the necessary patterns to build two Berkshires which were numbered 201-202 and listed as Class A (the former arrived on June 8, 1928 while the latter was delivered a few days later on June 14).

They were the only 2-8-4s ever used by a Canadian line and could produce 82,000 pounds of tractive effort, nearly twice the capability of the Consolidations' 45,780 pounds.

The Berks were also powerful enough that the TH&B always kept one on standby while the other was in service. 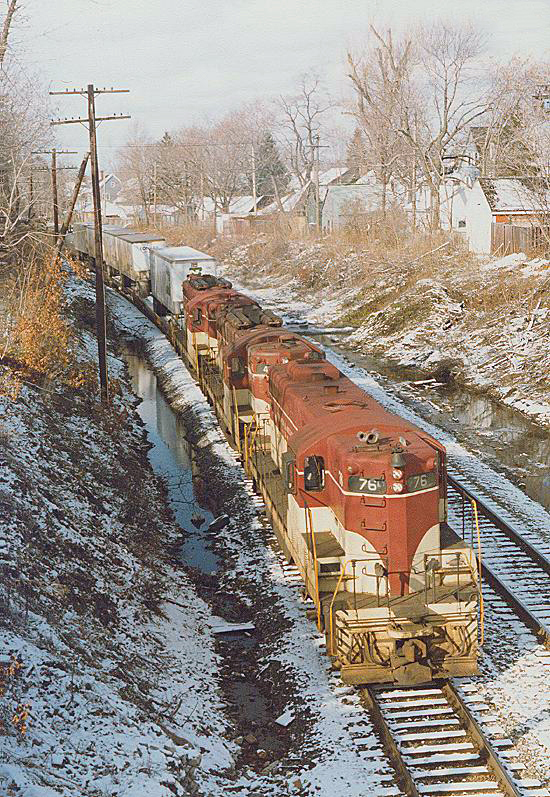 Toronto, Hamilton & Buffalo GP7 #76 along with GP9's #401 and #403 head east on Conrail's Belt Line with train CPBU as they pass beneath the bridge at the corner of Amherst and Starin Avenue in Buffalo, New York on November 27, 1982. Doug Kroll photo.

Surprisingly, the Toronto, Hamilton and Buffalo Railway operated a successful passenger business for many years as its route was the fastest and shortest connection between Toronto and New York's major cities.

For instance, even by the late 1940s the TH&B was carrying more than 500,000 passengers annually.

During the steam era these trains, like the Ontarian (which had connects from Toronto to Buffalo/New York/Rochester/Boston/Cleveland), were usually powered not only by the 4-6-2s mentioned above but also secondhand 4-6-4 Hudsons purchased from the NYC (Class J). 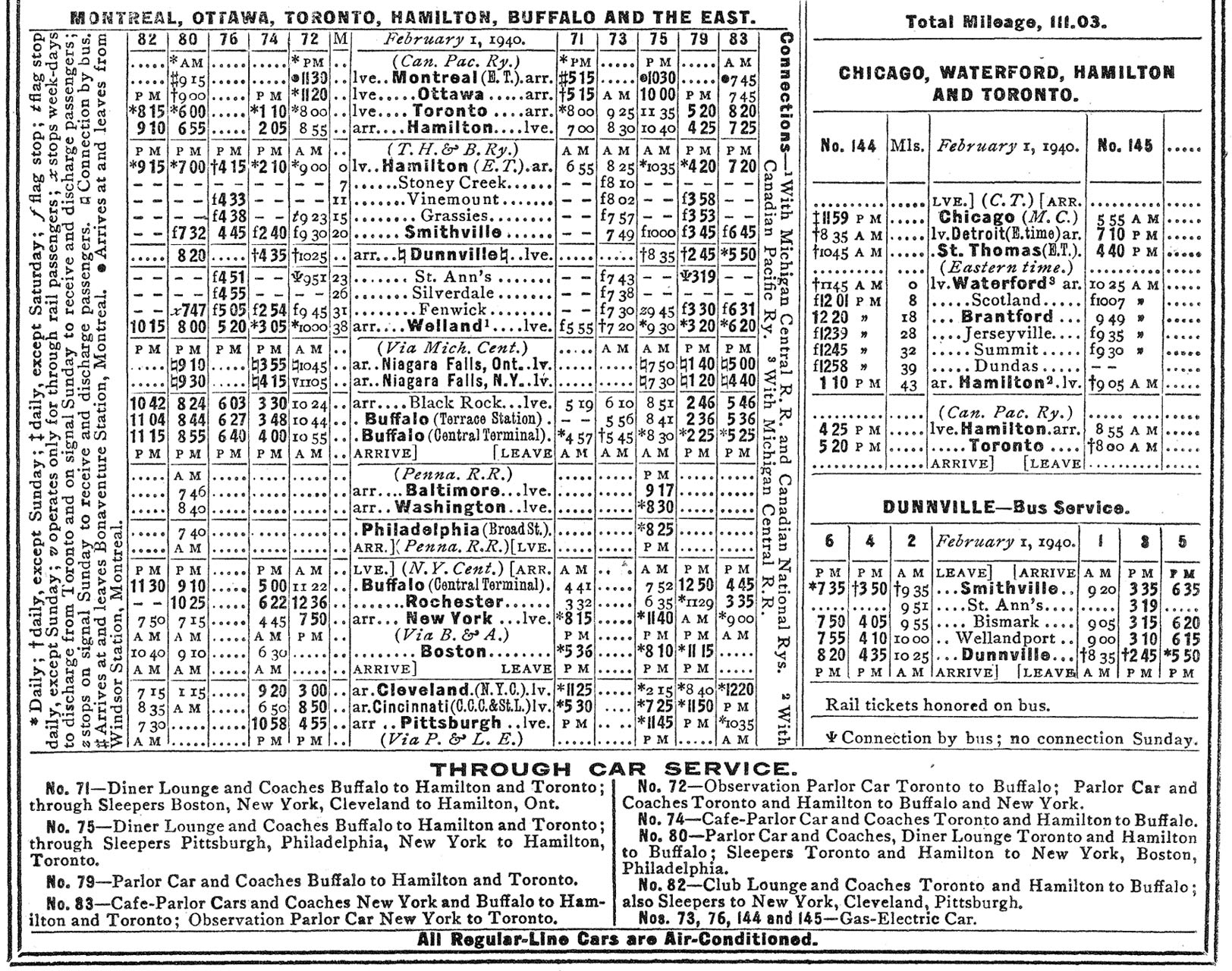 Between November, 1953 and March, 1954 the TH&B's entire steam fleet was slowly retired, replaced by Electro-Motive Geeps and switchers.

After the collapse of the Penn Central the failed company was forced to sell its 73% (that included NYC's 27% and its subsidiaries Michigan Central and Canada Southern that owned 18% each) to pay off its bankruptcy with CP acquiring this in 1977. 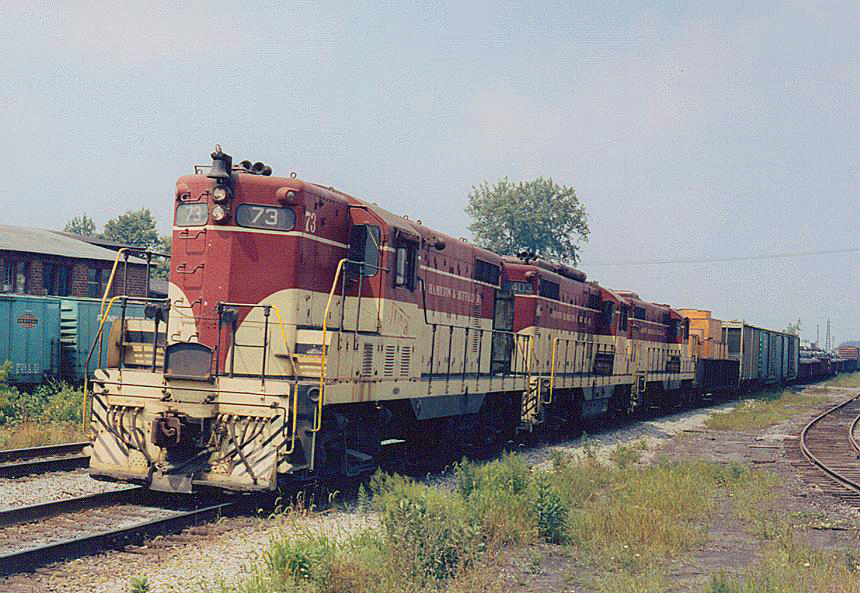 Into the 1980s the Toronto, Hamilton and Buffalo Railway was still moving a wide variety of freight (despite its cessation of passenger services after April 26, 1981) that included:


Combined, this freight provided the TH&B with more than 60,000 carloads annually (quite impressive for a line of its size, particularly during those turbulent years of the industry).

In an effort to streamline its Canadian operations the CP dissolved the TH&B effective January 1, 1987.

To learn more about this classic Ontario system and its history please check out the Toronto, Hamilton And Buffalo Railway Historical Society's website.