The television series, written and produced by Britt Allcroft, is actually based off the The Railway Series of books written by Englishmen Wilbert Awdry and his son in the 1940s.

Interestingly, the show even drew some interest from adults due to the superb craftsmanship of the models and layouts depicted.  Today, this has largely been replaced by CGI and computer animation.

Thomas himself is based from a real steam locomotive design, the E2 Class, an 0-6-0T ("T" referred to tank) wheel arrangement conceived by Lawson Billinton of the early 20th century.   Listed below is the 2022 schedule and dates regarding where Thomas The Tank Engine will be appearing. 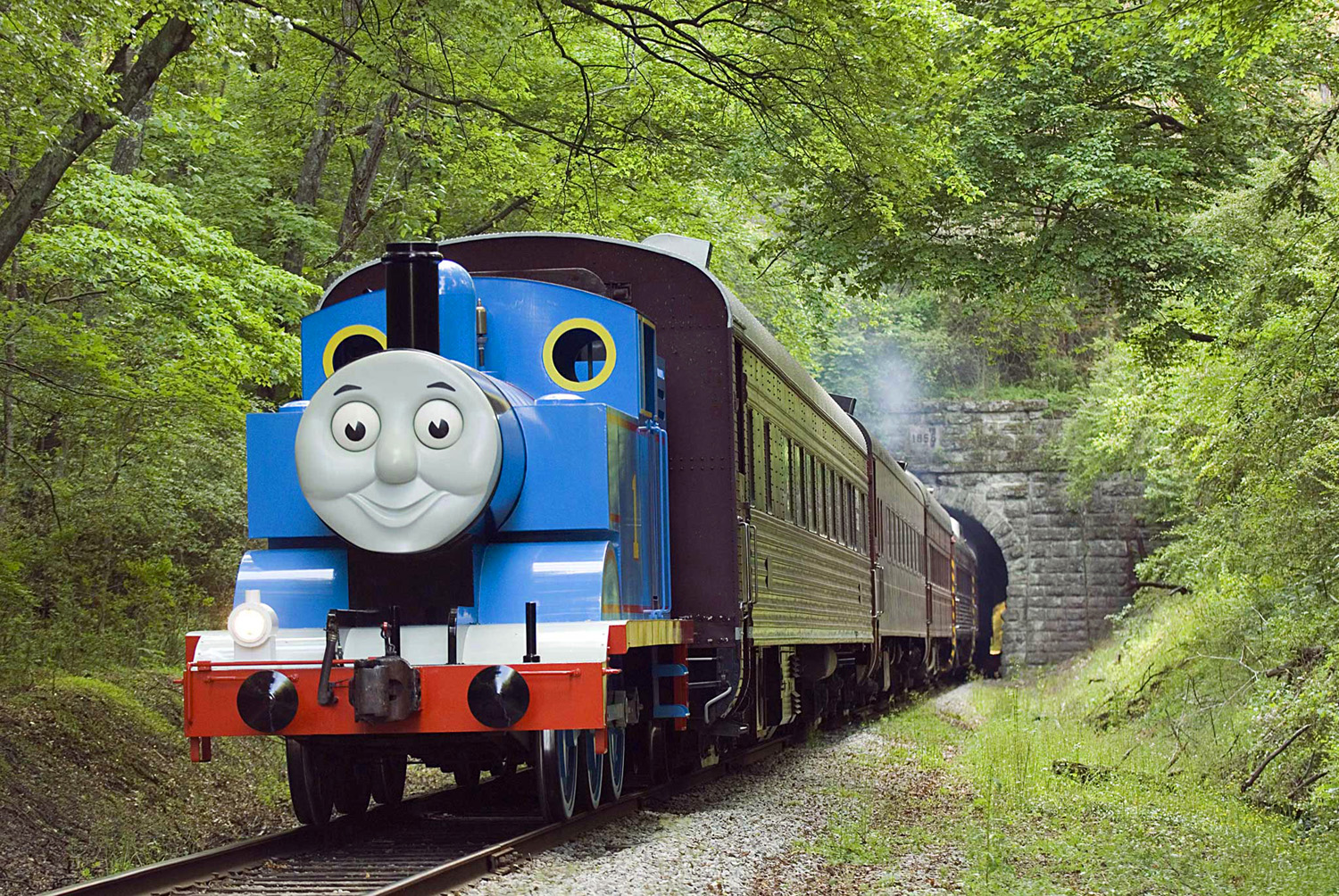 While the history of Thomas the train is interesting, this section looks to highlight the "real life" tank engine which is featured at tourist railroads and museums as special events all across the United States, and other countries, during the operating season.

Thomas the tank engine is also travels around the world to allow visitors, kids especially, to view and sometimes ride behind replica versions of the locomotive.

Thomas the train himself in this regard is licensed by HiT Entertainment, which acquired Allcroft's company (Britt Allcroft Company PLC), and has become an explosively popular draw wherever he goes, especially here in the United States.

Please Note!:  While I have striven to make sure the information regarding 2022 locations and dates is accurate, at the same time I cannot say so with complete 100% certainty; as such, I cannot be held liable for errors.

Dates sometimes change and if you have any questions concerning scheduling please contact HiT Entertainment.

Please Note!  There are some locations which now also feature Percy.  These are designated below using a small thumbnail image.

The information presented is accurate to the best of my knowledge although if there is an error I do apologize.  If you do not see (Updated) by each listing, those dates are not for the 2022 calendar year.

Sometimes organizations switch operating dates/times and I will try my best to keep up with any changes.  For more information regarding purchasing tickets and where/when Thomas will be running please visit the links above.

The museum also offers excursion train rides from March through October, featuring both steam and diesel locomotives.  They host "A Day Out With Thomas" on these dates in the spring:

Roaring Camp Railroads (Felton):  Owned and operated by the same organization which runs the Skunk Train the Roaring Camp hosts a number of different trains throughout the year including a beach train and forest train.

They also feature other specials including "A Day Out With Thomas" on these dates:

They also boast a large collection of historic railroad equipment.  During select dates in the spring and fall they host "A Day Out With Thomas":

Essex Steam Train (Essex): The Essex Steam Train has become one of the more popular train rides anywhere in the country offering a variety of special trips from its home base in Essex, including the ability to make riverboat charters.

They host "A Day Out With Thomas" during select dates in the spring, including special appearances by Percy!  Dates:  May 28-29 and June 4-5. Updated!

One of its special excursions operated during the year is hosting "A Day Out With Thomas" on these dates:

SAM Shortline Railway (Cordele):  The SAM Shortline excursion features a nearly 70-mile round trip that makes stops along the four small towns that dot the line while also traveling through the Georgia Veterans State Park.

The tourist train also hosts a number of special trains and events throughout the year including "A Day Out With Thomas" on these dates:

The IRM, as it's also known, has an impressive collection of preserved and restored equipment at its amazing facility. They host "A Day Out With Thomas," featuring Percy, on these dates: July 9-10 and July 16-17. Updated!

The railroad also hosts a number of special events throughout the year such as the Polar Express and "A Day Out With Thomas."  Dates:

Its trains feature both steam and diesel locomotives, as well as restored trolley car #50 (they also have a very extensive collection of non-operating locomotives and cars).  They host "A Day Out With Thomas" the tank engine on these dates:

Midland Railway (Baldwin City):   The all-volunteer Midland Railway features an impressive collection of equipment and operate a railroad that stretches about 20-miles at farthest reach south, to Ottawa.  They host "A Day Out With Thomas." (Currently no dates in 2022) 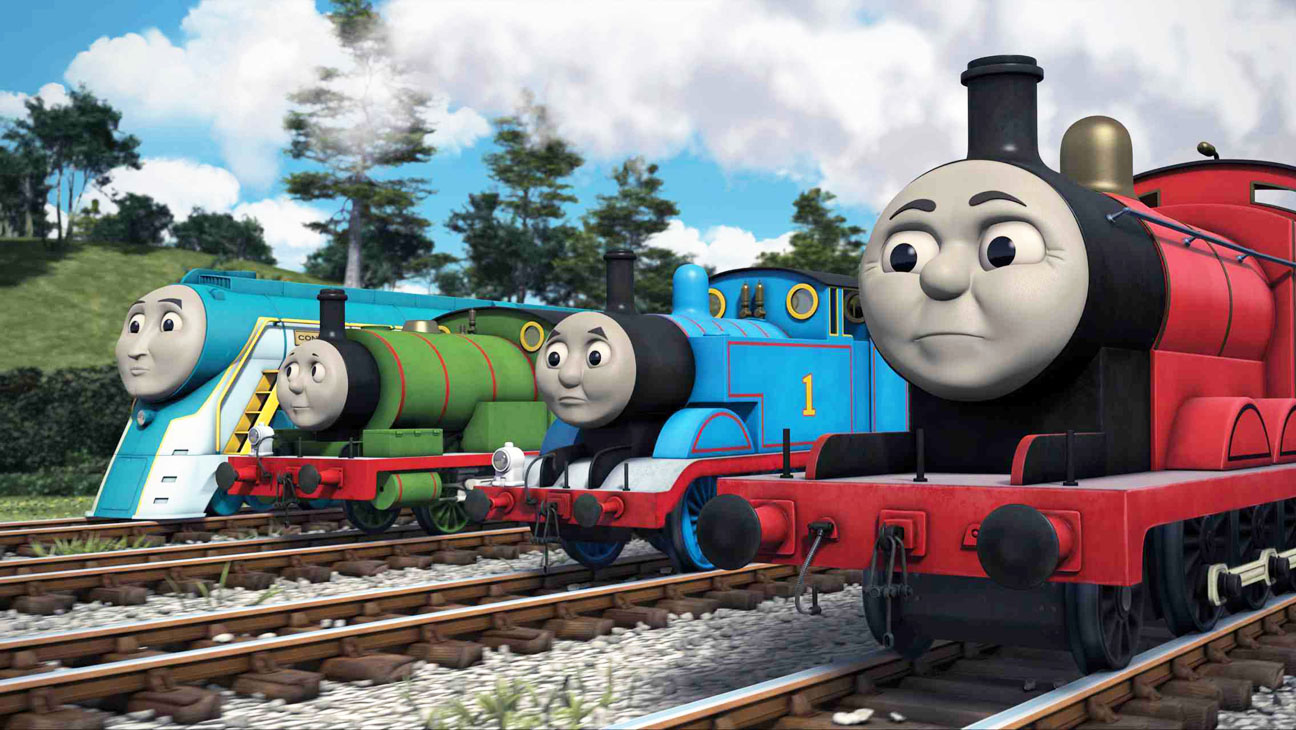 Since that time the museum has grown steadily and today features large collection of rolling stock and even features excursion trains which are pulled by the most famous locomotive on the grounds, ex-L&N 4-6-2 Pacific Type #152.

Today, they offer numerous specials throughout the year including train robberies, dinner trains, murder mysteries, and host "A Day Out With Thomas" which makes his stop at the museum from:

It houses historic railroad equipment (not only from its namesake railroad, the Baltimore & Ohio but also many important historical pieces from other railroads around the country).

Finally, they also offer short excursions on the premises and host "A Day Out With Thomas" on these dates: May 13-15 and May 20-22. Updated!

Henry Ford Museum (Dearborn):  One of Michigan's most well-known museum this complex features an impressive collection of artifacts related to the history of transportation in this country including several pieces of rolling stock and steam locomotives.

A few of these machines are restored and even offer train rides including "A Day Out With Thomas" on these dates:  May 13-15, May 20-22. Updated!

While the railroad’s star attraction is narrow-gauge steam locomotives #464, originally owned by the Denver & Rio Grande Western, the Huckleberry has other motive power on the premises.

The 26-mile route and today the railroad operates its trains using both steam and diesel locomotives.

One of their special events is "A Day Out With Thomas" hosted on these dates: August 5-7 and August 12-14. Updated!

Virginia & Truckee Railroad (Virginia City):  The Virginia and Truckee Railway began when it was chartered in 1869 and meant to provide transportation services to the Reno and Carson City areas.

The railroad ceased to exist as a freight line by 1950 but slowly made a comeback as a tourist line over the years.

Today, about 15 miles of the line are operable although rebuilding of the route is not yet complete along with additional restorations of locomotives and equipment.

One of the ways they have attracted ridership is by hosting special events, such as "A Day Out With Thomas" which will be featured this year on...

Conway Scenic Railway (North Conway):   The Conway Scenic Railroad is one of the more popular tourist trains in the country featuring first-class dining services on some of their trains as you enjoy your journey through beautiful New England in the Mt. Washington Valley. They also offer standard excursion trains as well as numerous seasonal trains and special events throughout the year such as "A Day Out With Thomas."  Dates:   (Currently no dates in 2022)

Most trains are operated by a Chinese-built steam locomotive and the railroad features everything from wine trains to the Polar Express and "A Day Out With Thomas" the tank engine.  Dates:  July 8-10 and July 15-17. Updated!

Delaware & Ulster Railroad (Arkville):  The D&U operates over part of the same ex-New York Central corridor which the Catskill Mountain Railroad utilizes (The line's original builder was known as the Ulster & Delaware Railroad).

Their train rides  travel through the scenic Catskill Mountain region and depart from the depot in Arkville.  In 2022 they will host Thomas on these dates:

The museum is housed in the New York Central's former freight depot and also operates a 34-mile round trip excursion train.  One of their specials is hosting "A Day Out With Thomas" on these dates:  June 10-12. Updated!

As part of the museum they operate excursion trains and is one of just two locations in the United States to feature the live steam locomotive version of Thomas the tank engine.  Percy is also featured during "A Day Out With Thomas" which will be on these dates:

Tweetsie Railroad (Blowing Rock):  The Tweetsie Railroad has been operating since 1957 and is based from the historic East Tennessee & Western North Carolina Railroad, a classic narrow-gauge system which once served both its namesake states.

The railroad uses no steam locomotives but does operate a fleet of historic Alco diesel locomotives. Throughout the year they operate they host special events including the popular "Day Out With Thomas" on...  (Currently no dates in 2022)

Strasburg Railroad (Strasburg): The Strasburg Railroad, located in the heart of Pennsylvania’s Amish community in Lancaster, is the country’s oldest railroad still in operation dating back to 1832.

The railroad handles both freight and passengers but is also an operating history book featuring historic steam locomotives with restored, period passenger cars (dating to the 1800s).

They provide guests everything from dinner train service to an open bar car for adults. One of their special events is hosting "A Day Out With Thomas" several times throughout the year. Percy will be present during the trips!  These dates include: April 29-30, May 1-2, June 17-20, September 16-19. Updated!

However, it also operates excursion trains throughout the year offering trips that travel as far as 180 miles, round trip! They host "A Day Out With Thomas" during the late summer on these dates: (No dates in 2022)

Today, the railroad operates a six-mile round trip near Chattanooga and hosts numerous specials throughout the year. "A Day Out With Thomas" makes a visit on these dates:  April 23-24, April 30, May 1. Updated!

Austin Steam Train (Burnet): The Austin Steam Train is based in Austin, Texas operating through the state's "Hill Country" uses tracks once owned by the Southern Pacific. The line is 163-miles in length and used as both a commuter and freight rail line today. They host "A Day Out With Thomas" on

Grapevine Railroad (Grapevine): The Grapevine Railroad operates between its headquarters and Fort Worth on trackage originally owned by the St. Louis Southwestern Railway (The Cotton Belt). "A Day Out With Thomas" stops by on these dates: 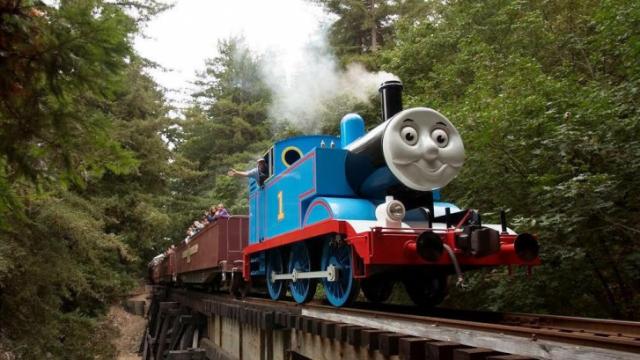 The NRM today has a nice collection of rolling stock at their facility in Green Bay and while they do not really offer a true rail excursion they do offer train rides around the property. They host "A Day Out With Thomas" at the start of the summer season running...