Railroads In The 21st Century

Railroading today, unlike what the industry witnessed between the end of World War II and 1980, has witnessed a renaissance with profits and ton-mileage steadily increasing.

Particularly in the 1970s times were not good and many seemed to think that the industry was an outdated mode of transportation that needed to be replaced.

The mega-merger movement also continued during the 1980s as many more famous names like the Milwaukee Road, Southern Railway, Norfolk & Western Railway, Rio Grande and others all disappeared during the decade.

While its been unfortunate to see these names gone forever railroads found a new role in the transportation market during the 1980s and today they play an extremely important role in moving goods and materials. 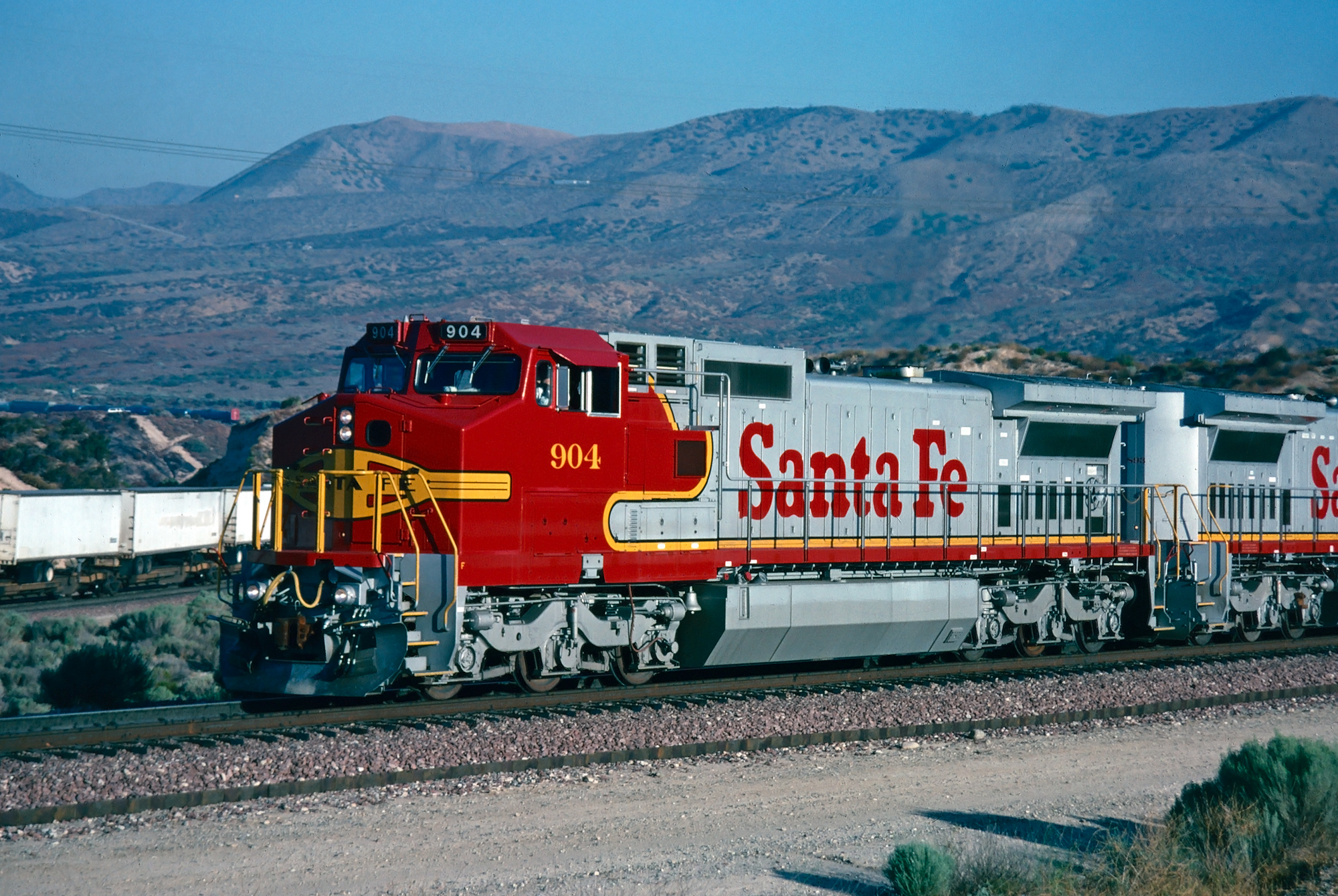 While bankruptcies and mergers saw many fabled companies disappear in the 1960s and 1970 the process only increased after 1980 with the Staggers Act. This act was named after Rep. Harley O. Staggers of West Virginia who originally sponsored it.

It was signed into law by President Jimmy Carter on October 14, 1980, which allowed enormous deregulation of the railroad industry.

One of the first to go was the fabled Chicago, Rock Island & Pacific (Rock Island), which was liquidated on January 25, 1980 after a strike crippled the railroad and it was unable to move freight. In 1980 there was over two-dozen Class I railroads still in operation.

While famous, classic railroad companies steadily disappeared after 1980 the industry itself was on the rebound. Since 1980 rail freight ton-miles have steadily increased from 932 billion in 1980 to over 1.5 trillion in 2006.

What's more is that market analysts and experts expect this number to continue to rise as shippers, and even trucking companies, look for more efficient and faster means of transporting their products with highways steadily becoming more choked and clogged.

Between 1990 and 2000, however, we saw even more famous railroads disappear into merger, most notably the Atchison, Topeka & Santa Fe Railway.

With the merger thus ended one of the most famous railroads to ever operate worldwide although its legend will forever live on in the products bearing its name and famous "Warbonnet" livery. The Santa Fe, however, wasn't the only well-known railroad to disappear in the '90s.

In 1995 the Chicago & North Western Railway became another arm of the Union Pacific, the Illinois Central Railroad was purchased by the Canadian National in 1998, and in 1999 Conrail was split up among CSX and Norfolk Southern.

Since the fall of Conrail no other major mergers have taken place leaving North America with seven major Class Is; CSX, NS, BNSF Railway, UP, Kansas City Southern, CN and Canadian Pacific. 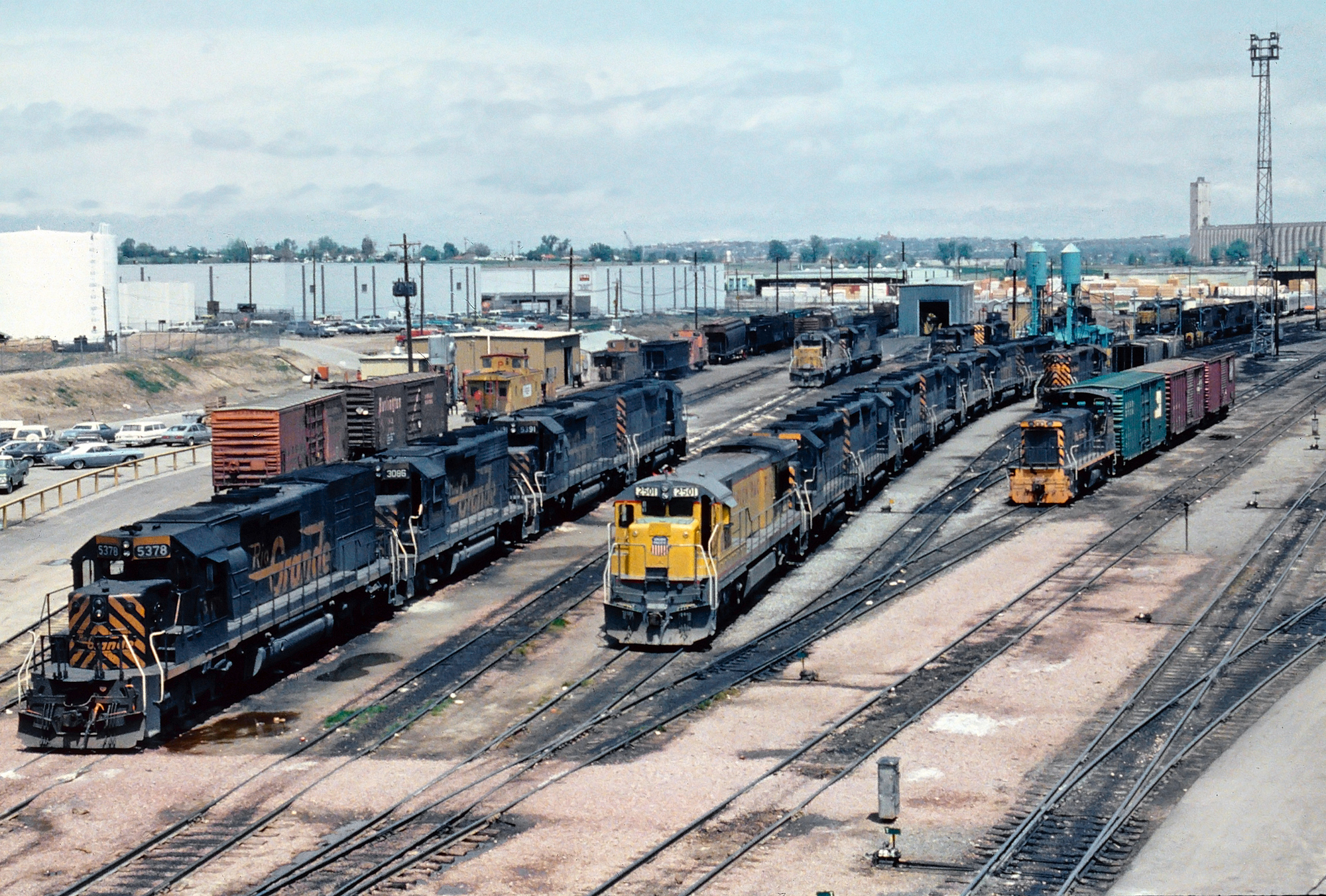 With technological improvements such as continuous welded rail (CWR) in the 1950s and the widespread use of concrete ties, today company's can operate faster trains while at the same time reducing maintenance to both the track structure and equipment.

In the 1970s locomotives began to built with computer control systems and EMD's SD40-2, one of the most successful diesels of all time, is perhaps best remembered. In the 1990s both EMD and General Electric began constructing locomotives that employed alternating current (AC) traction motors. 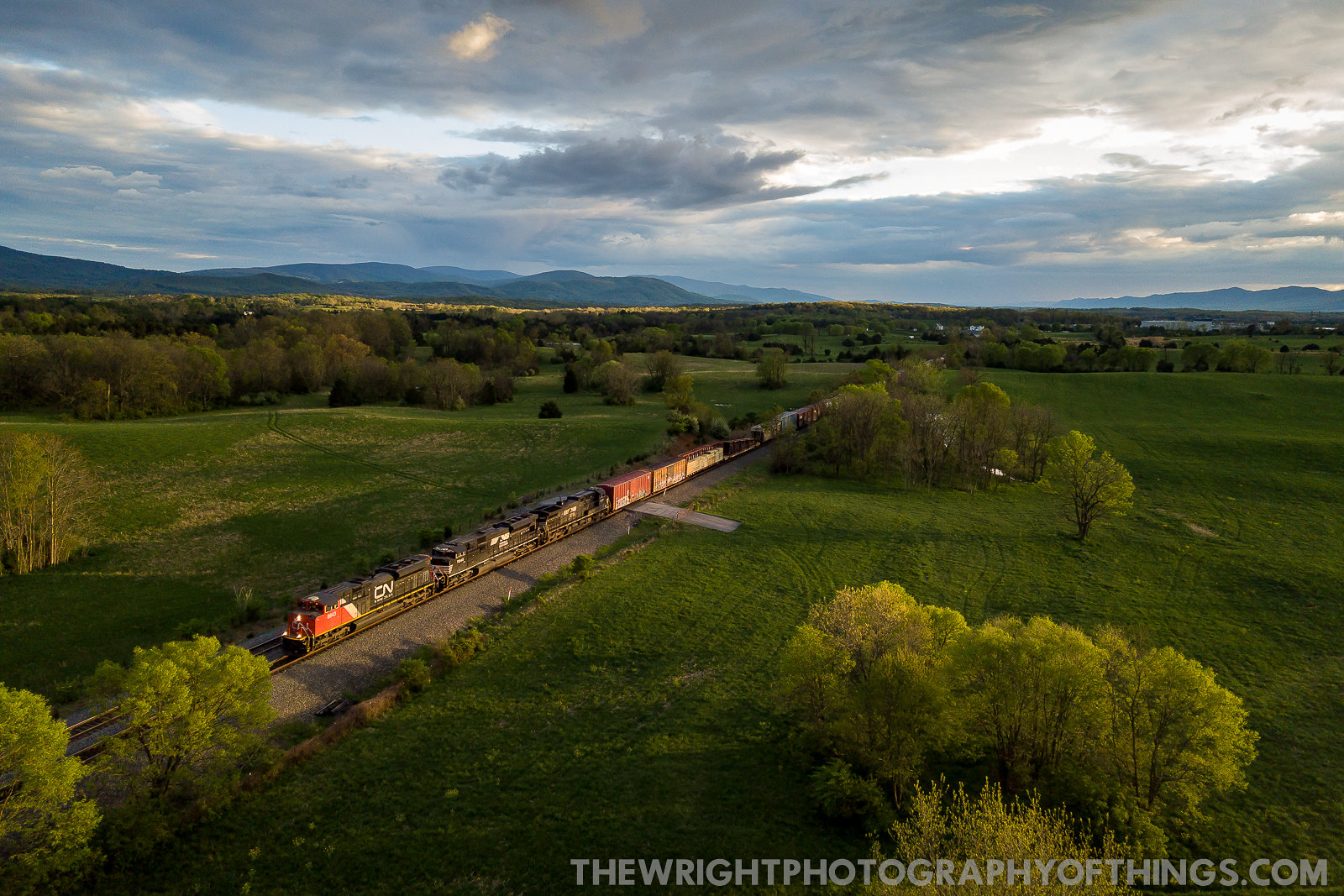 Today, the newest locomotives are equipped with the latest electronics and are becoming increasingly more environmentally friendly as has been seen with GE's and EMD's newest models the Evolution Series™ and SD70ACe. Railroads of the present era are seeing a renaissance of freight traffic not experienced since World War II.

Freight ton-miles have more than doubled since the mid-1940s with railroads hauling 43% (the most) of all transportation types, and freight revenue reached $57 billion in 2007.

While coal still makes up nearly 50% of all freight revenue for railroads other commodities are also important to the industry such as chemicals, intermodal and agricultural products. 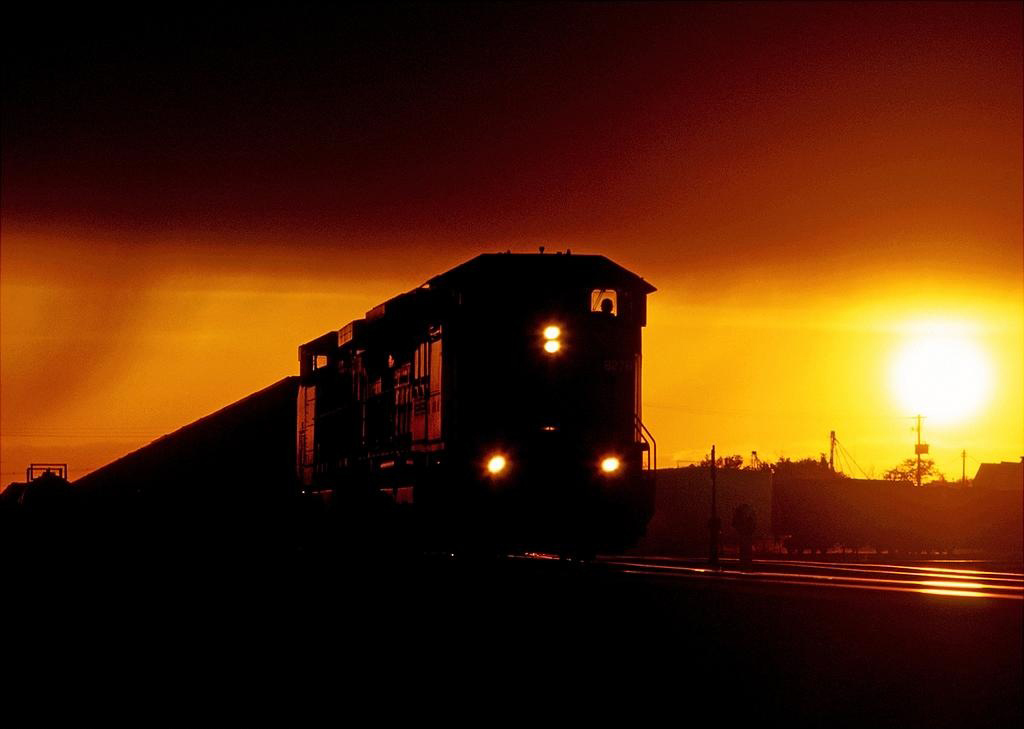 Union Pacific SD9043MAC's are silhouetted against a setting sun as they roll through a grade-crossing at Scottsbluff, Nebraska on June 19, 2000. Wade Massie photo.

Even though Amtrak over the years has operated almost entirely on “life support” with just enough funding to survive year to year, support for the carrier has increased, particularly in the post-9/11 era and it commonly breaks annual ridership records. 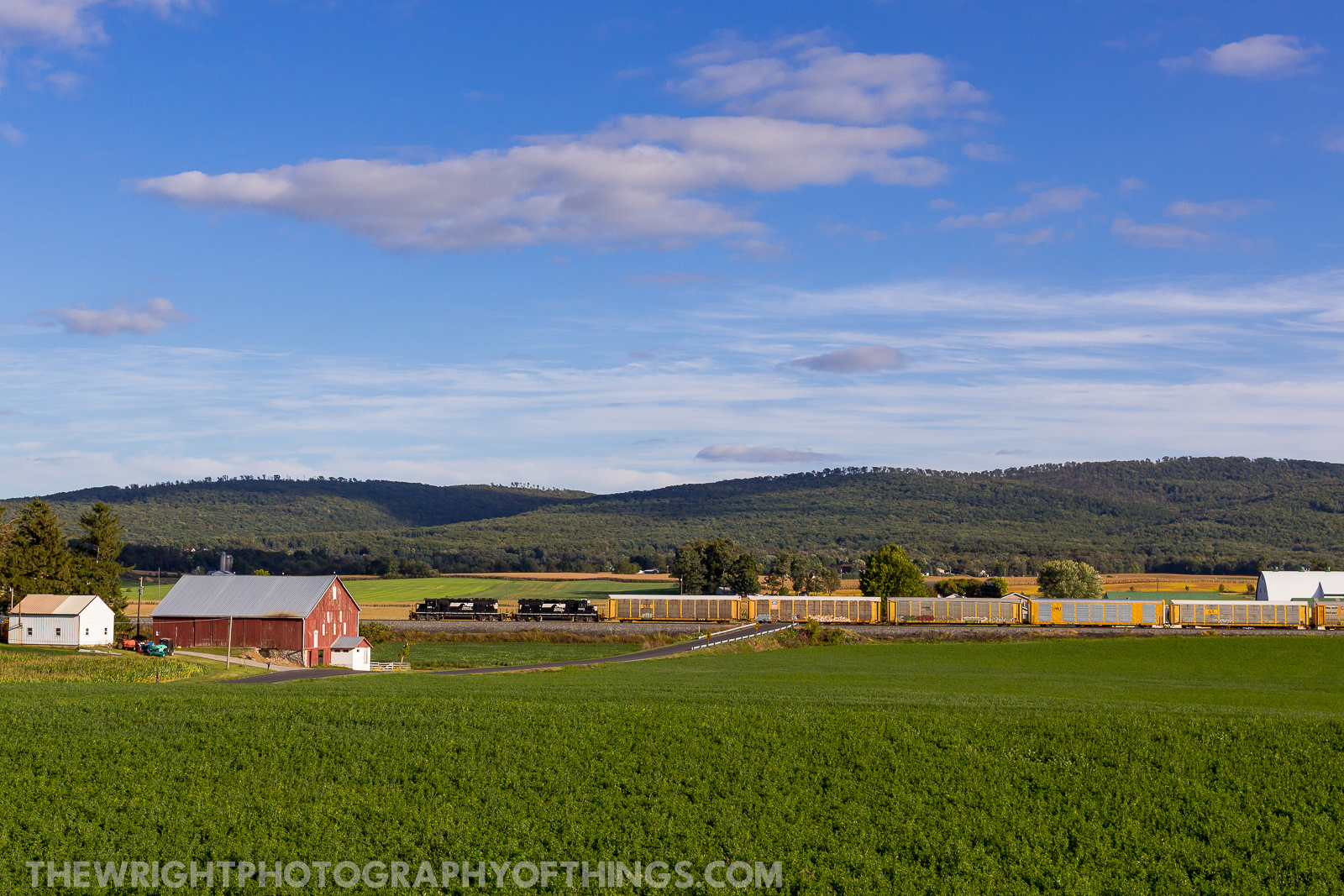 Norfolk Southern train 290 rolls past a rural farm at Lee's Crossroads, Pennsylvania within the Cumberland Valley along the ex-Reading Lurgan Branch on September 22, 2014. Jon Wright photo.

Both are doing a magnificent job at developing passenger rail corridors in their respective states, particularly North Carolina.

As transportation issues are becoming more of a topic today, passenger and commuter rail are both gaining increasing support and its future looks very bright, as everything from local trolley systems to large state-supported passenger rail systems are being planned and developed.

Today's freight trains are a far cry from thirty to forty years ago when much of the public thought it an outdated mode of transportation that was no longer needed.

Now, today, it is as strong as ever and looks to be solidly entrenched as an important component of of our transportation network.