While many immigrants helped construct these lines, such as Chinese, African Americans, and Italians there was no authoritative title on the contribution of Mexican labor until Mr. Garcilazo's book was released in 2012.

It includes more than 200 pages of material covering all aspects of their involvement within the railroad industry ranging from the typical discrimination and racism of the period to community life and the traquero culture which sprang up.

You will find no other in-depth material, all within one book, which so thoroughly covers this subject! 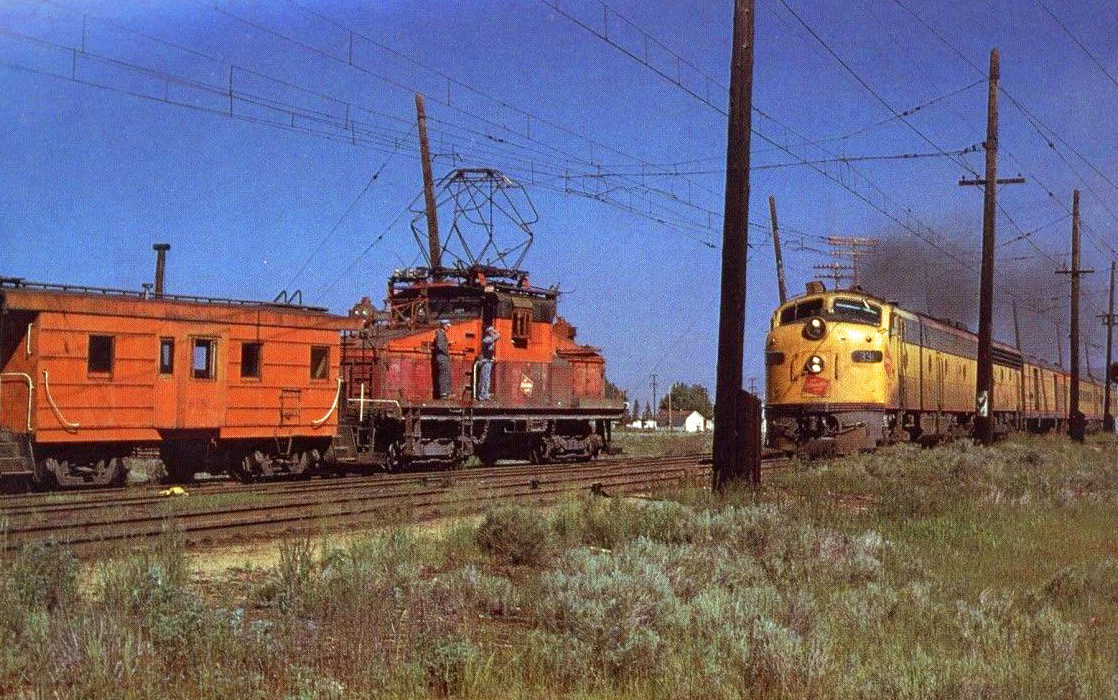 Milwaukee Road E9A #33-C has the "Deer Lodge Special" under the wires of the Rocky Mountain Division at Butte, Montana as switcher E-81 performs its daily chores on June 25, 1963. Bob Johnson photo.

The term "traquero" describes the Mexican or Mexican American (Chicano) railroad track worker and was essentially the same thing as the English word for "gandy dancer."

The book now in print is not the final version Garcilazo envisioned as he was working to prepare it for publication when he unexpectedly passed away in 2001.

Despite his untimely death and, ultimately unfinished book, Garcilazo still provided a detailed, in-depth piece on the "traquero" and the invaluable role they played in building the western railroads.

The book is broken down into six different chapters and also includes a foreward (by Vicki Ruiz), introduction, conclusion, endnotes, bibliography, and index.

The opening chapter, entitled "Railroads And The Socioeconomic Development Of The Southwest" looks at the growth of the railroads across the West and American interests tapping the region's vast natural resources (such as timber and copper).

On August 3, 1881 Luis Terrazas, governor of Chihuahua drove a silver spike symbolizing the completion of direct rail service between Mexico and United States.

This event not only enabled immigrants easier travel into America but also occurred during the West's booming railroad construction of the late 19th century.

Perhaps most interesting is a fact many probably do not realize; Mexicans were the dominant immigrant labor performing trackwork in the Southwest by the turn of the 20th century.

Aside from improved transportation between both countries there were a number of other reasons for an increasing influx of Mexican immigrants during this time, which Garcilazo details in his book; two of the most notable included social unrest in Mexico and anti-Chinese violence during the 1870s and 1880s.

While Chicano's worked in many states/territories west of Chicago and the Mississippi River they were most often found in the Southwest and West from Texas stretching into California.

Other notable railroads to utilize a Chicano workforce included the Chicago, Rock Island & Pacific (Rock Island), Northern Pacific, Great Northern, and later the Chicago, Milwaukee & St. Paul (Milwaukee Road) when it built into the Pacific Northwest during the early 1900s.

In chapter two, "Labor Recruitment," Garcilazo highlights the subject, in particular as it related to the Santa Fe.

It is perhaps not surprising that for anyone who has studied the history of America's minority cultures, immigrant labor on the railroads, including Mexicans, constantly dealt with racism and discrimination from fellow coworkers as well as upper management.

The railroads' top brass found employing Mexicans to their liking since they often worked for lower wages and longer hours with, generally, fewer complaints.

Moving into the third chapter, entitled "Work Experiences," Garcilazo details what it was like working day to day on the railroad.

While Chicano's were normally acclimated to a climate most would find insufferable today, along with living conditions less than ideal, the general work proved the greatest danger with few safety regulations in place at that time.

The Interstate Commerce Commission reported trackmen were killed or injured more frequently than any other position in the industry.

By the turn of the 20th century, traqueros had acquired enough skill and seniority (used here only describe their growing years of service and not actual rank within the company, a difficult prospect to achieve at the time) that groups began to assemble, in some manner, for better working conditions.

In chapter four, "Labor Struggles," the book covers this subject and begins by highlighting the first such union, the La Union Federal Mexicana.

The UFM was organized by the traqueros of the Pacific Electric Railway (PE) and narrow-gauge Los Angeles Railway (LARy), the two most prolific streetcar systems to serve the city.

Their goal in the spring of 1903 was to increase wages and overtime pay during weekends.   Despite their efforts against owner Henry Huntington they ultimately failed due to lack of representation and power.

In general, Mexicans tended not to organize as rigorously as other groups but did have some success as part of the larger Industrial Workers of the World (IWW) and Knights of Labor.

The final two chapters are entitled "Boxcar Communities" and "Traquero Culture" highlighting the unique lifestyles of the Chicano from their housing in boxcar camps to communal living.

As the years passed Mexican immigrants tended to drift away from track work while others, yearning for better pay, moved to large cities and found work in industrial plants or meatpacking facilities.

By the time of the Great Depression new railroad construction was winding down, and so too the need for unskilled labor.

As former traquero Jesus Ramirez stated, "It is never in the books or papers that the Mexicans built the railroads."  However, thanks to Dr. Jeffrey Garcilazo's detailed study that is no longer the case today.