The Terminal Railroad Association Of St. Louis, also known by its reporting marks as the TRRA, is a switching line that has been in operation since the late 1880s.

It was originally founded by a group of railroads to not only switch freight amongst their lines in St. Louis, Missouri and East St. Louis, Illinois (across the Mississippi River) but it also would come to own St. Louis Union Station and switched all trains entering and exiting the terminal.

The TRRA proved to be a vitally important asset since St. Louis was the second-busiest railroad gateway behind only Chicago.

Today, while it no longer operates Union Station, five of the seven Class Is still own the TRRA and the system continues to sport its own livery and locomotive roster. 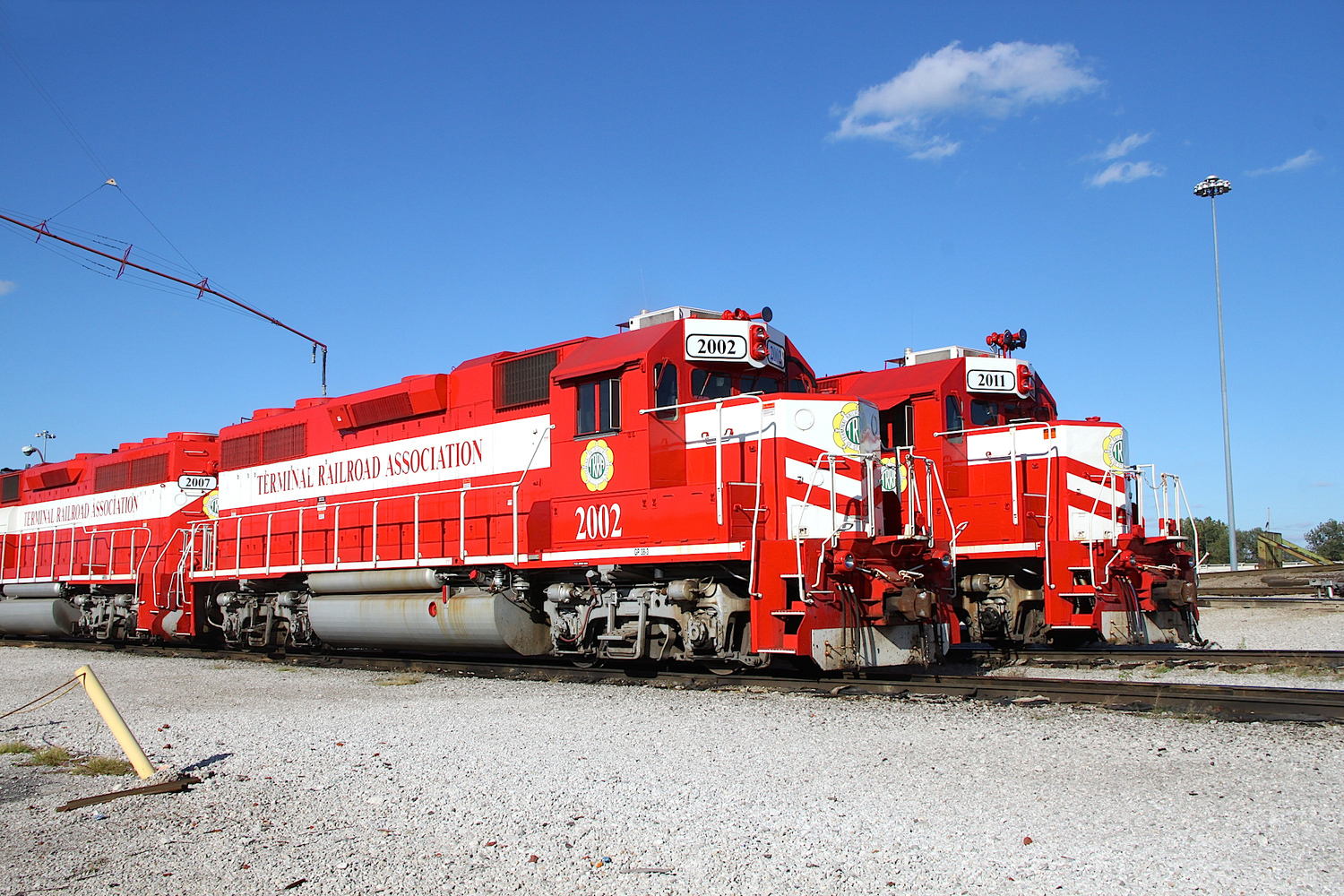 The original purpose of the Terminal Railroad Association Of St. Louis was to operate St. Louis Union Station.

The station's architect was Theodore C. Link and the building's exterior was of the French Romanesque style with cut stone and towers featured on the exterior with a grand 280-foot clock tower as the centerpiece.

The station's interior featured a 65-foot vaulted ceiling in the Grand Hall and stained-glass windows.

The building was split into three main sections:

In the late 1880s railroads were even more competitive than they are today and the thought of jointly operating a central terminals was not something they wished to do.

On July 8, 1893 the cornerstone of the St. Louis Union Station was laid and the $6.5 million structure was completed a year later, officially opened on September 1, 1894 at 1:45 a.m. following the arrival of the first train. 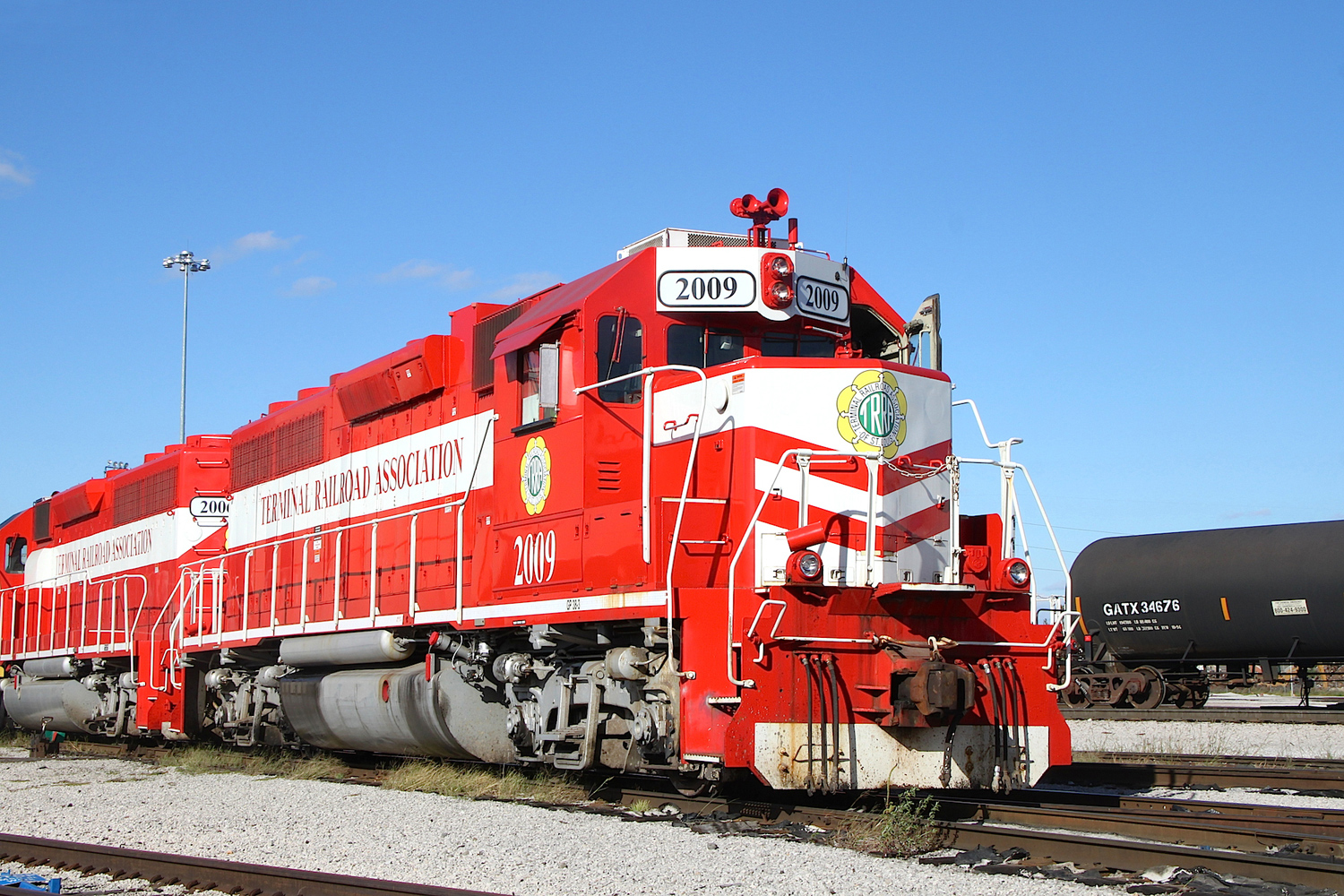 In 1889, rail tycoon Jay Gould convinced the six railroads which owned the terminal to come together and form the TRRA for the cost savings that would be gained by jointly owning a switching railroad to perform these tasks. 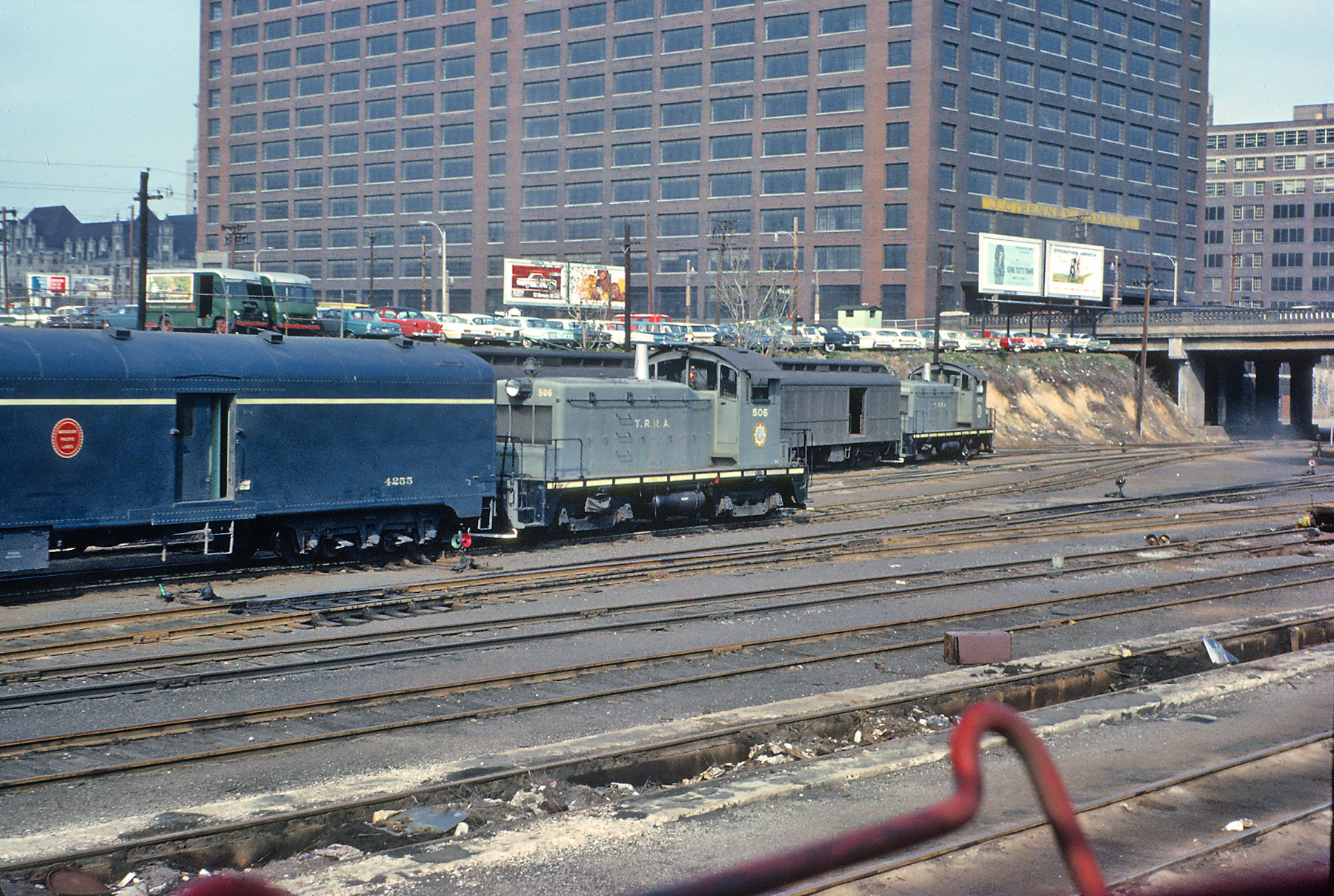 Aside from the role the Terminal Railroad Association Of St. Louis played in keeping passenger trains coordinated into and out of the terminal it also played a growing importance in moving freight around St. Louis.

It owned two of the four major bridges crossing the Mississippi River; the Merchants Bridge (opened on March 18, 1890 it is a half-mile long) and the James B. Eads Bridge (in 1989 it swapped ownership of this structure with the city, acquiring the MacArthur Bridge in exchange).

In East St. Louis the TRRA interchanged with:

To the west in St. Louis there were connections with the St. Louis-San Francisco Railway (Frisco), Rock Island, Missouri-Kansas-Texas (Katy), and additional interchanges with the N&W and MoPac.

The TRRA's major yard has always been located in Madison, Illinois on the extreme northeastern fringe of the system (north of East St. Louis).

During the steam era the system mostly utilized common switcher designs like 0-6-0s and 0-8-0s although it also once used 2-6-0 Moguls. 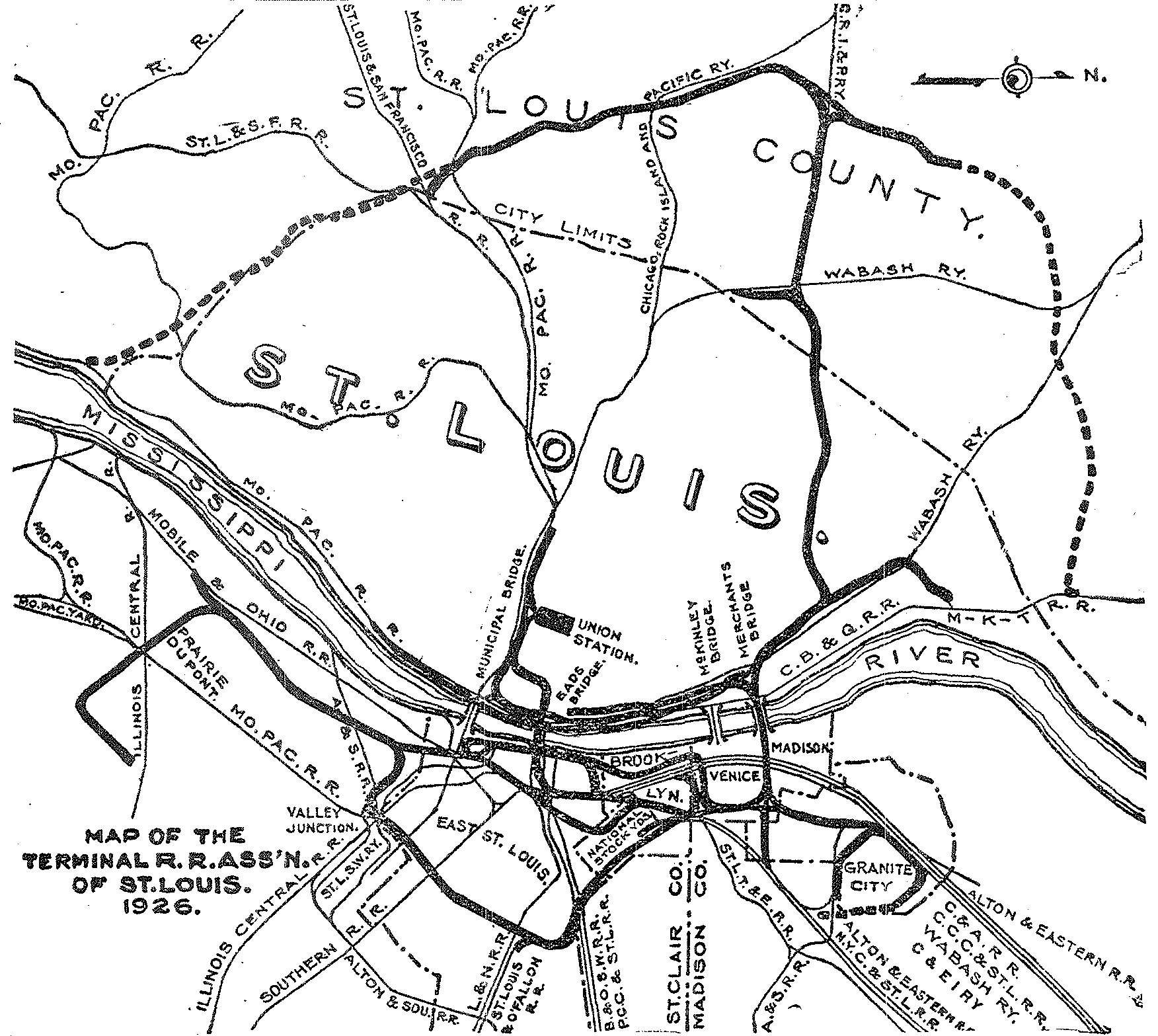 An historic, 1926 map of the Terminal Railroad Association of St. Louis. Author's collection.

(Thanks to Wayne Leeman's "Wayne Leeman's St. Louis Union Station Scrapbook" from the March, 1978 issue of Trains as a reference for this article.) 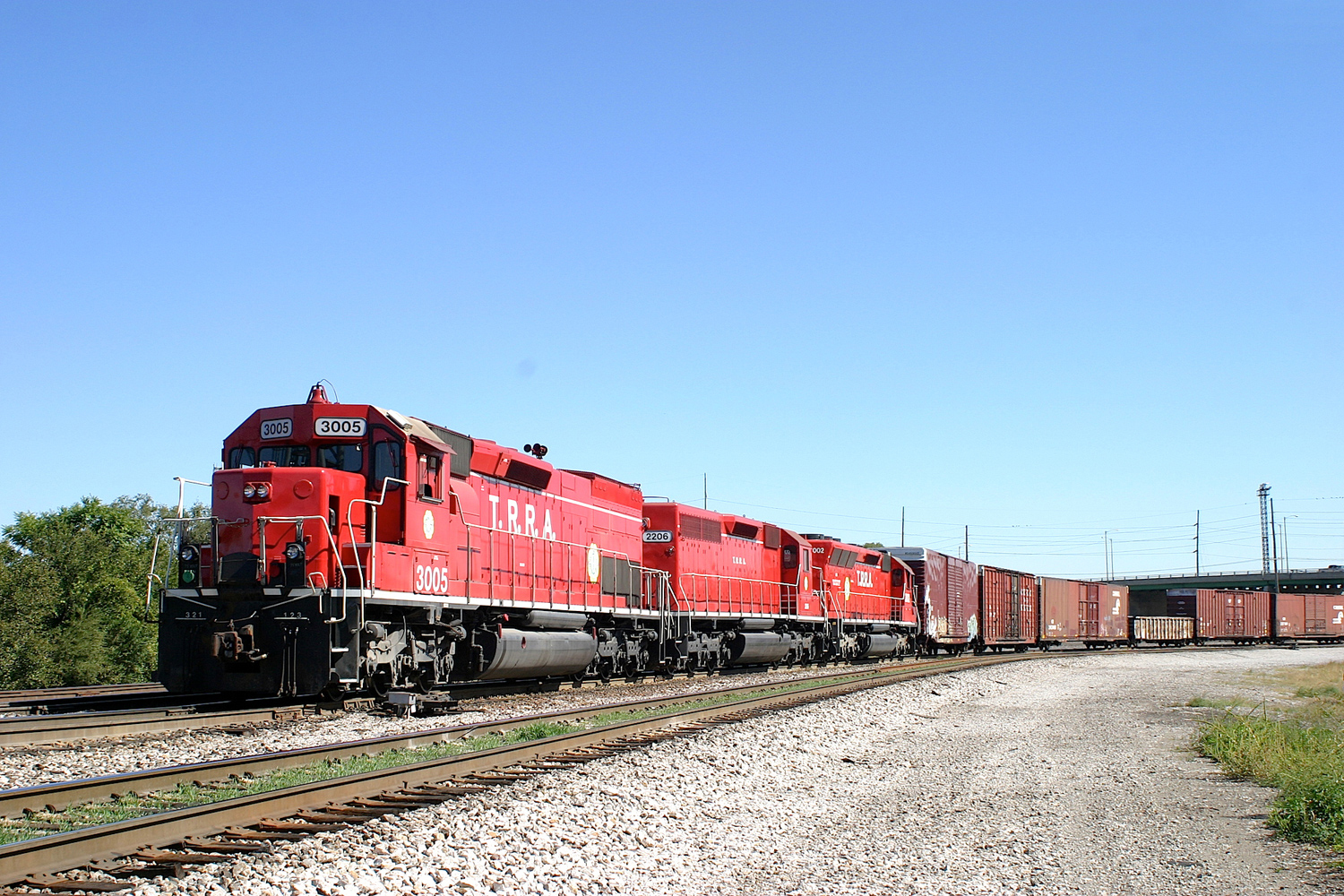 During its peak years of servicing St. Louis Union Station (through the 1920s, and again during World War II) the TRRA was handling nearly 200 trains every day that transported more than 100,000 passengers.

For instance, at the end of 1943 this translated into 72,621 passenger trains and 660,906 cars that had to be efficiently moved through the terminal and around the city, all while staying on a strict timetable schedule (much different than Amtrak).

By April 30, 1971 just six trains were still calling to the station and the next day the TRRA handed operations over to the national carrier and sold the building to a private developer, forever ending its passenger duties.

These lines interchange with its five Class I owners that include the BNSF Railway, Union Pacific, CSX Transportation, Norfolk Southern, and Canadian National.

Interestingly enough, the TRRA is still owned by nearly as many railroads as when it first began back in 1889. To learn more about the history of the TRRA please click here.