Illinois Central's Tulip Viaduct is a hidden engineering marvel located among the rolling hills and farmland of southwestern Indiana, about 25 miles west of Bloomington.

The bridge was constructed for the Indiana Southern Railway during the first decade of the 20th century but very soon was acquired by the growing Illinois Central.  The structure is an impressive sight from the ground as it spans an open valley and stands more than a half-football field in the air.

The line where the viaduct is located would constitute the IC's furthest reach eastward as it connected to the important city of Indianapolis.  During the mid-1980s as the IC was shedding large sections of its system the route to Indy was sold to regional Indiana Rail Road, and the viaduct remains in use under that company today.

The bridge's future appears quite secure as it acts as a key component of the Class II's 250-mile network.  At present, the railroad's system forms a rough "X" from Indianapolis to eastern Illinois.  It also operates a north-south segment that reaches Terre Haute and Chicago.  The viaduct can be along the eastern arm of this "X" in Greene County. 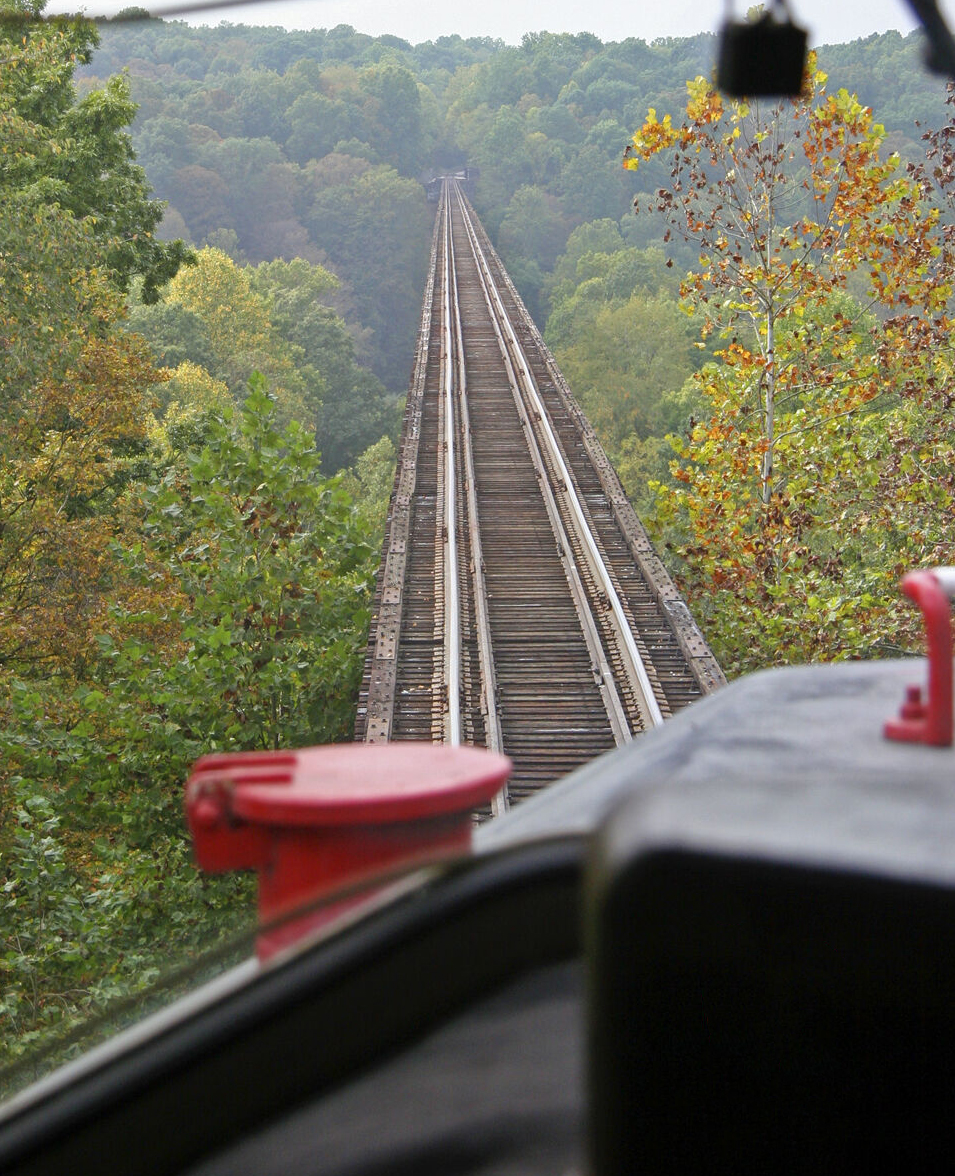 Taken from the conductor's side of the cab of an Indiana Rail Road SD9043MAC, the locomotive is crossing Tulip Viaduct.

To understand the history of the the viaduct a little background on the route that it was built for is important.  The earliest railroad to construct a line east of Effingham, Illinois (where a connection with the IC was established) was the Cincinnati, Effingham & Quincy.

This system completed a narrow-gauge corridor of roughly 54.3 miles to Palestine along the Wabash River and the Indiana border. This railroad was later renamed as the Indiana & Illinois Southern (I&IS) in 1883, constructed a bridge across the Wabash reaching Switz City by 1886, and converted to standard-gauge operation in 1887.

During 1899 the Indianapolis Southern Railroad (IS) was incorporated by local Indianapolis businessmen to connect with the I&IS and offer a new western transportation artery for the city.  About this time the Illinois Central became interested in both railroads as a means of reaching Indianapolis.

A map of Tulip Viaduct, circa 1962. Author's collection.

The IC kept its distance from the IS project but it is said that the growing railroad financed much of it.  Construction of the IS began a few years later in 1903 heading roughly west from Indianapolis.

To speed up the process in completing the railroad many fills were temporarily bypassed and instead wooden trestles were used, giving the line the nickname as the "Hi & Dry Branch."  These were later fortified and made more permanent by filling in the bridges (a process that was actually not that uncommon).

The actual construction of Tulip Viaduct began during the summer of 1905 when crews began clearing the property for the many pier foundations required to span the nearly half-mile long valley.  Over the next year crews, predominantly Italian immigrant labor, poured the concrete foundations (handled by the Collier Bridge Company), which was completed on May 12, 1906. 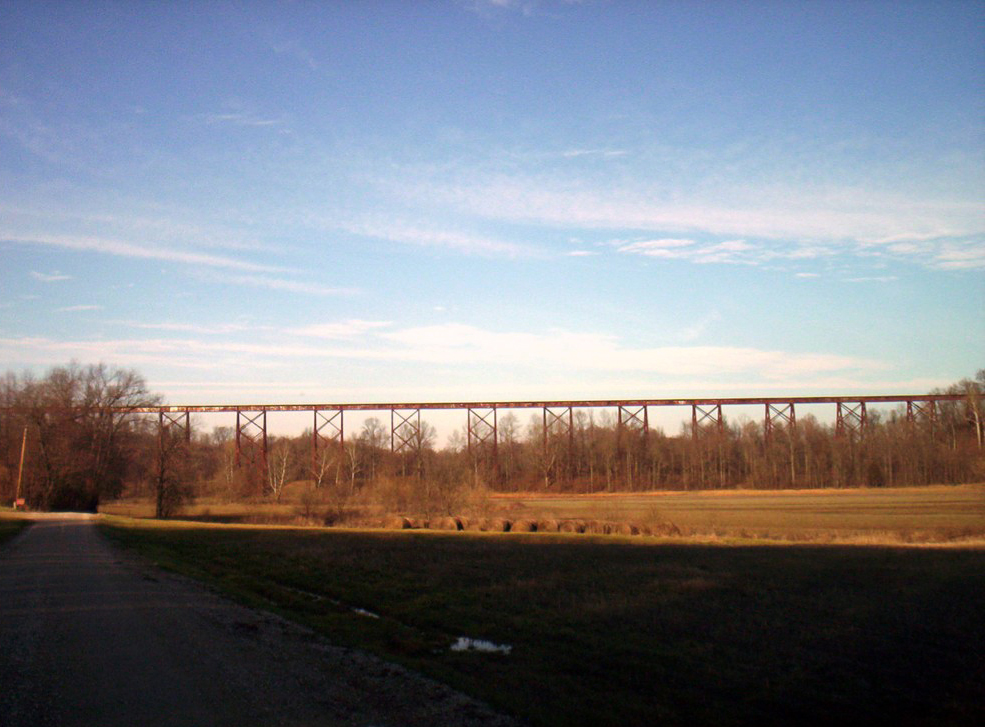 Work slowly continued on the project and it is said locals would often congregate in the fields next to and adjacent from the bridge, having picnics and get-togethers as the crews worked.

By August of that year all of the materials had arrived on-site to begin actually erecting the steel, which officially commenced on September 8th.  The bridge was assembled by the Strobel Steel Construction  Company from south to north (or west to east) and featured 38 steel columns and the structure was 2,295 feet in length when completed.

The viaduct boasted 2,856 tons of steel in its construction, all provided by the American Bridge Company and cost a staggering $246,504 (or roughly $25 million today).  The structure towered over the Richland Creek valley and was 157 feet above the ground at its highest point. 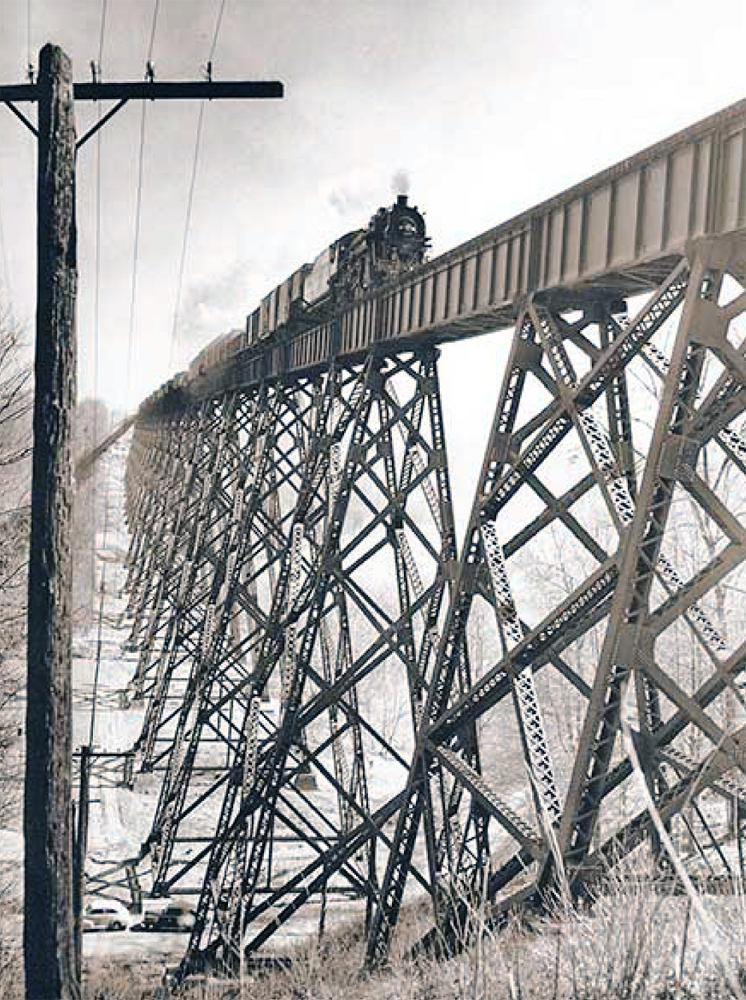 When the steel fabrication of the project was completed on November 6, 1906, the bridge was the largest of its kind in the world, an impressive feat considering it was more or less along a branch line.

Officially, the viaduct opened to rail traffic on December 21st of that year as a few additional months were required to finish laying ties, rails, and other minor work.  The Indianapolis Southern was short-lived as an independent company; the Indiana & Illinois Southern and IS were soon merged and then taken over the Illinois Central in 1911 giving the road access to Indianapolis.

Running west from Indianapolis Union Station the IC's line is exactly 177.6 miles to Effingham (according to the company's 1969 timetable) where it reconnects with the Chicago main line. 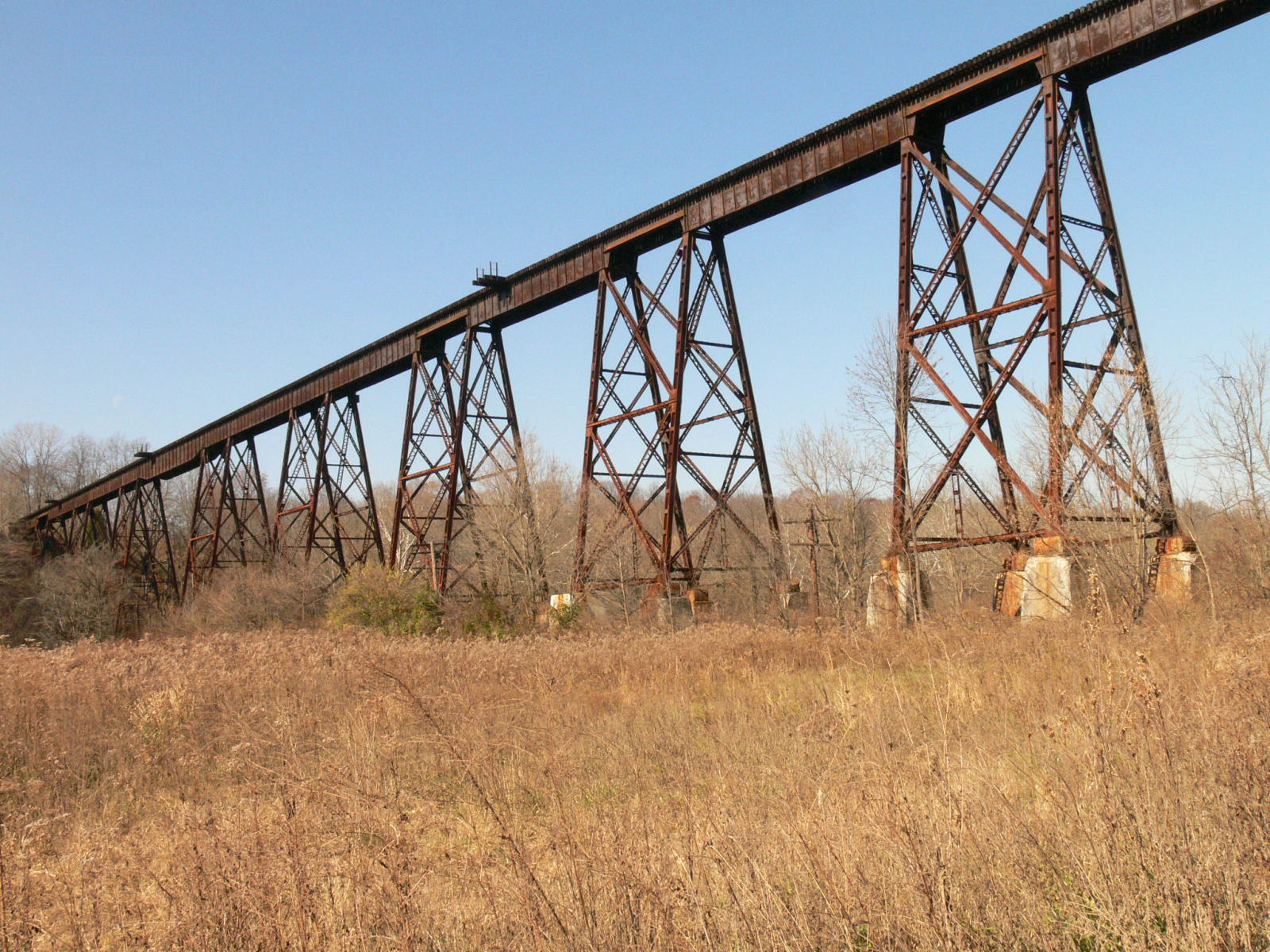 The viaduct, listed as bridged X76-6 by the railroad, was named for the small nearby hamlet of Tulip which was located at milepost 77.5 (due west).

Interestingly, despite this route serving Indianapolis and having popular runs like the City Of New Orleans, Panama Limited, City Of Miami, and numerous others the IC never operated any named trains to the city and ended all passenger service over the corridor by 1948.

The bridge continued to carry freight for many decades to follow, even through the merger with the Gulf, Mobile & Ohio in 1972.  Unfortunately, the GM&O union saw two road's serving much of the same territory and in an attempt to improve its financial situation the company shed thousands of miles of trackage in the 1980s, which included the line to Indianapolis.

In 1986 it was sold to the new Indiana Rail Road, today a 500+ mile prospering regional that continues to operate the route, and viaduct, as far west as Newton (153.4 miles).