The Lackawanna's Tunkhannock Viaduct (sometimes also known as the Nicholson Bridge) was its crowning achievement of its second cut-off located in northeast Pennsylvania and southern New York.

Around the turn of the 20th century the DL&W began to look at ways to straighten and flatten its route to Buffalo, New York in an attempt to be more competitive with nearby railroads.

The latter engineering project is where the massive viaduct is located and was so immense that it held the world's record as the largest concrete bridge for more than a half-century.

The Lackawanna of this era was a prodigiously successful railroad, enjoying a bountiful supply of anthracite coal from mines predominantly located in eastern Pennsylvania.

The railroad was also managed to extreme precision and never experienced a bankruptcy during its lifetime.  These traits allowed the company to carry out such incredible engineering feats.  Today, Tunkhannock Viaduct remains in use by owner Norfolk Southern. 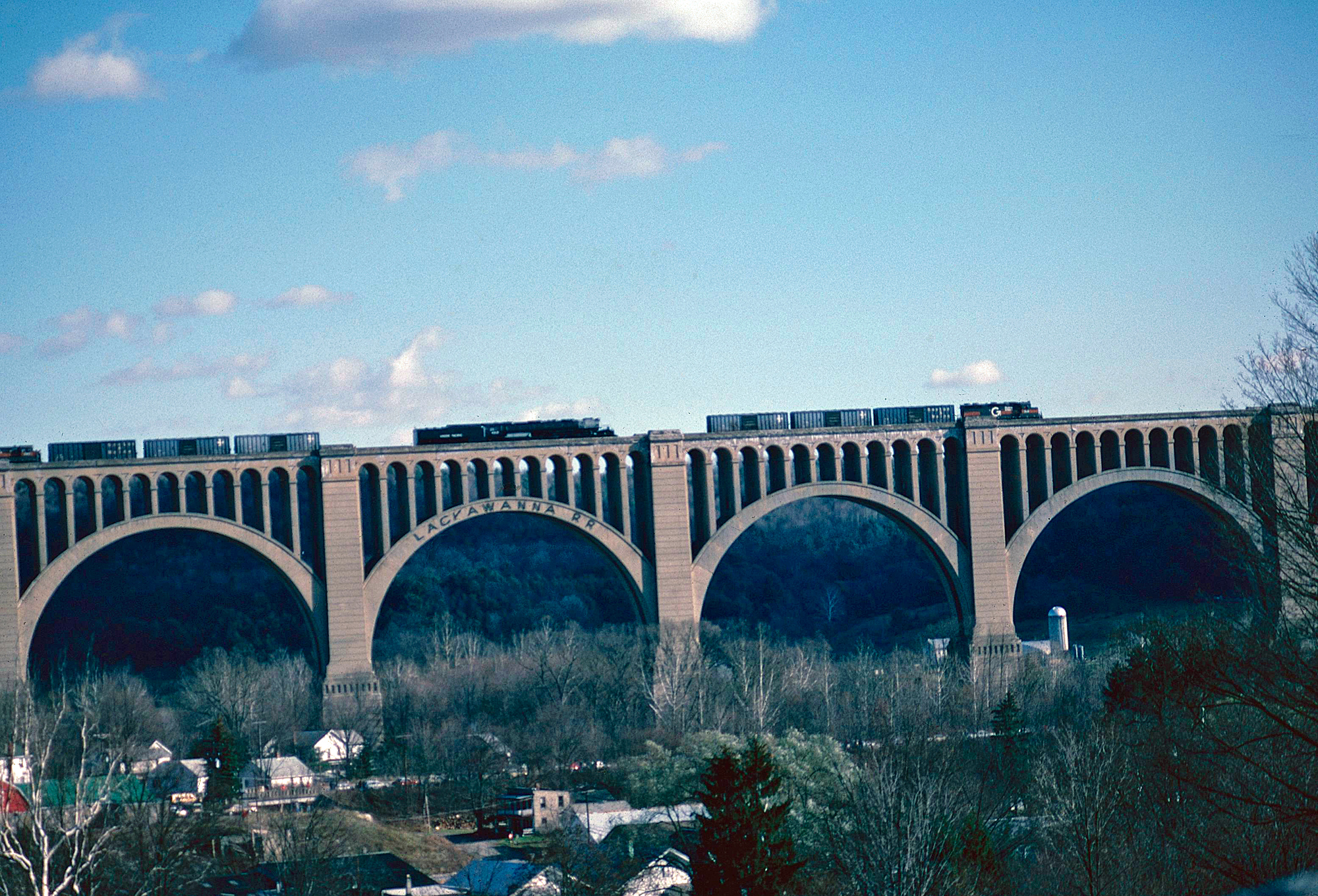 The Delaware, Lackawanna and Western Railroad officially has its beginnings in 1851 when in October 20th of that year the Lackawanna & Western Railroad operated its first scheduled train between Scranton and Great Bend, Pennsylvania (originally the L&W was known as the Liggetts Gap Railroad until it changed its name in 1851).

The Lackawanna gained its name in March of 1853 when it merged with the Delaware & Cobbs Gap Railroad (which constructed a line south of Scranton) to form the Delaware, Lackawanna and Western Railroad. 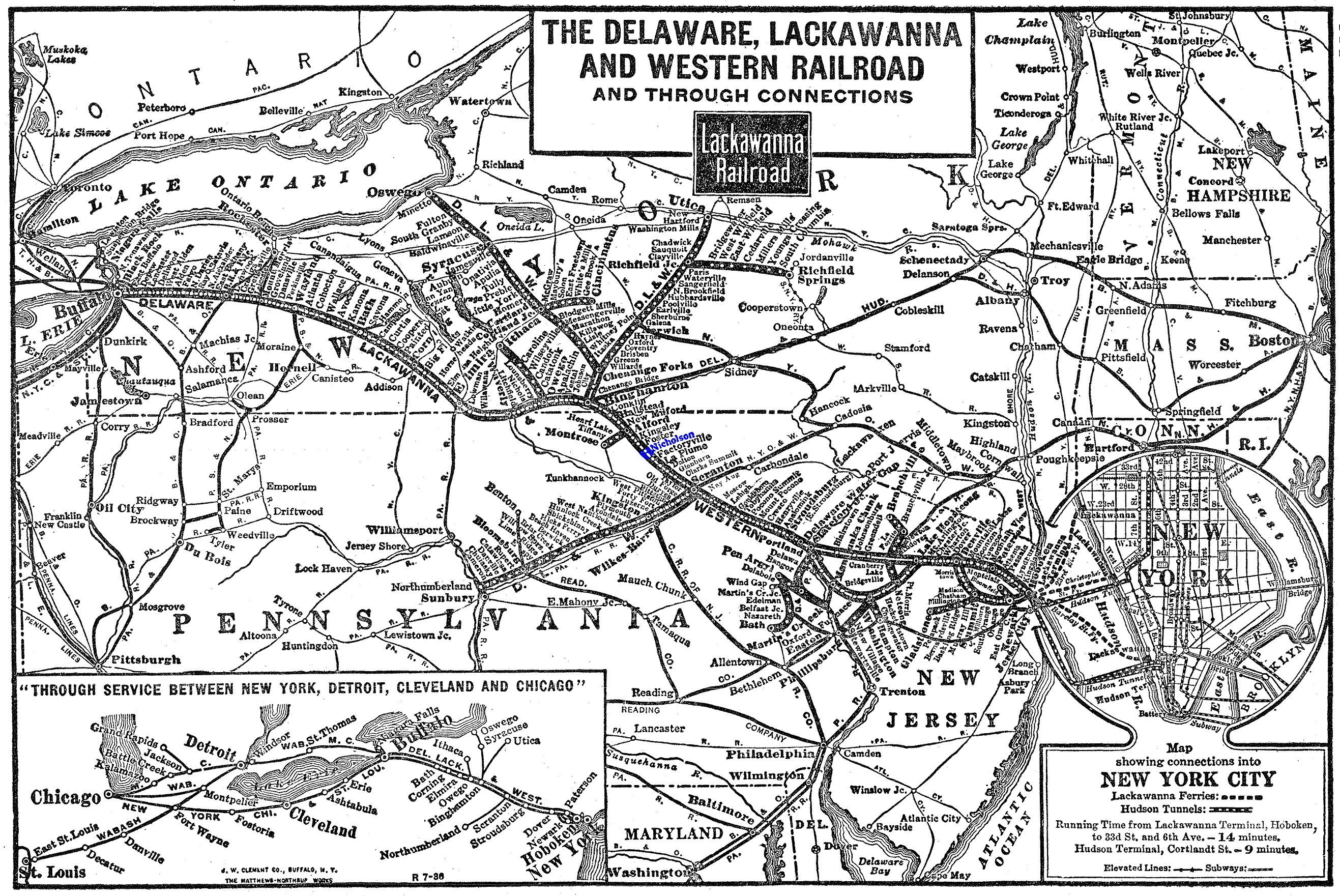 A map of the Tunkhannock Viaduct (highlighted in blue) from the Lackawanna Railroad's 1936 system map. Author's collection.

With the ownership of these lines the DL&W's main line was basically complete and, in all, stretched from Buffalo, New York to Hoboken, New Jersey just across the Hudson River from downtown New York City (Manhattan).

The DL&W's Tunkhannock Viaduct is located in Nicholson, Pennsylvania (thus why it is sometimes called Nicholson Bridge/Viaduct) located a little more than 20 miles north of Scranton. The viaduct spans the Tunkhannock Creek and while the stream itself the valley itself is, which forced the railroad to build such a massive structure.

The idea of the DL&W leveling and straightening its main line to Buffalo began around 1900 and was the result of its president William Haynes Truesdale, which not only wanted the railroad to be more competitive in the New York City-Buffalo market but also wished to alleviate a curving and meandering route through much of northeastern Pennsylvania that was slow, steep, and circuitous. 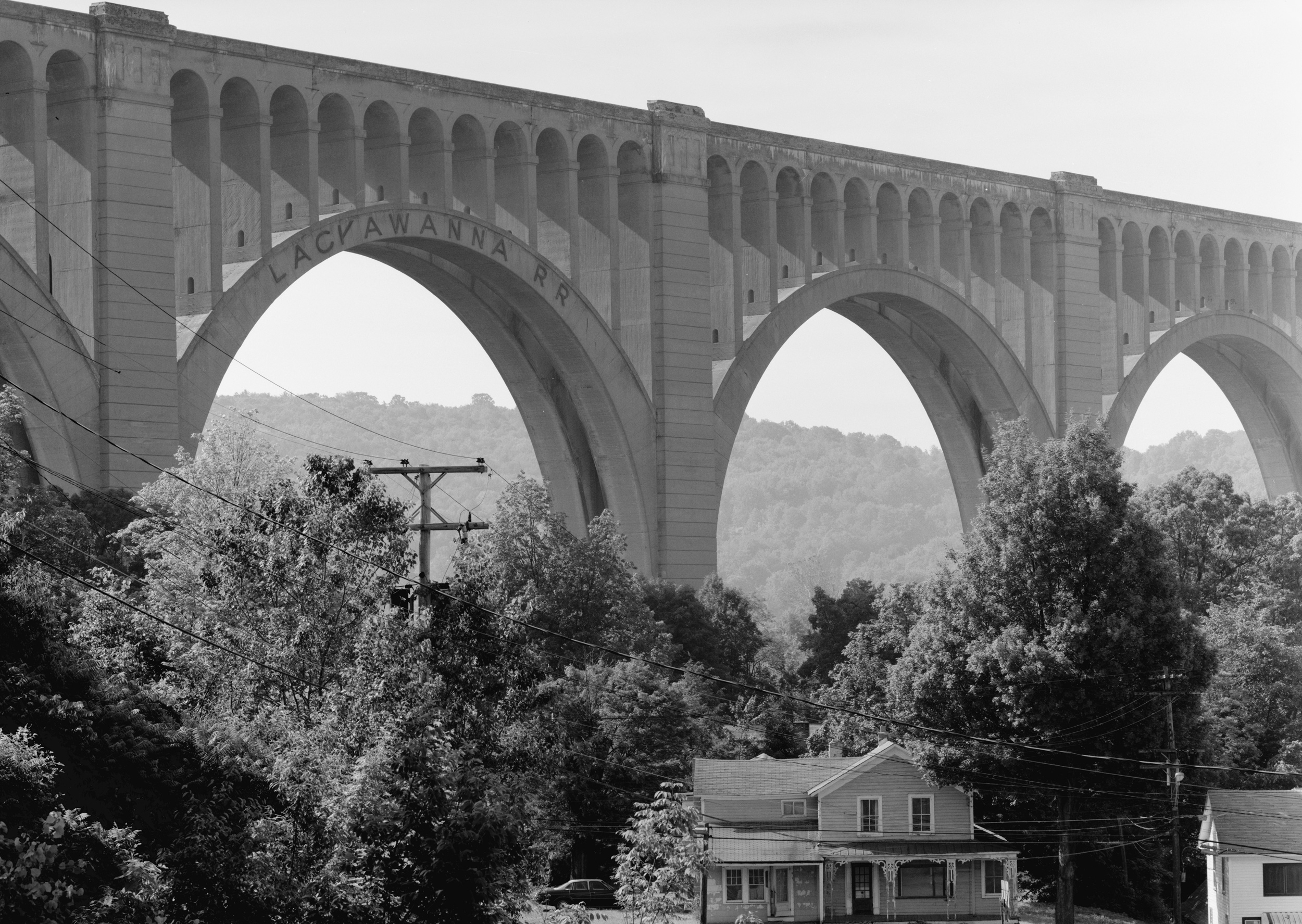 A close-up view of Tunkhannock Viaduct, taken at the same time as the photo above. The Delaware, Lackawanna & Western, a proud and then powerful railroad, made sure there was little doubt regarding who owned the structure.

Working from east to west the New Jersey/Lackawanna Cutoff was built between 1908 and 1911 at a cost of $11 million. While this route was only about 28.5 miles in length it shaved more than 11 miles of redundant trackage and reduced the ruling grade by more than half.

A year later the Lackawanna began the Nicholson-Hallstead Cutoff, which ultimately cost $14 million covering just under 40 miles. While the new alignment only saved the DL&W about 3.5 miles it eliminated many curves and grades.  The viaduct began was designed by Abraham Burton Cohen and began construction in May of 1912. 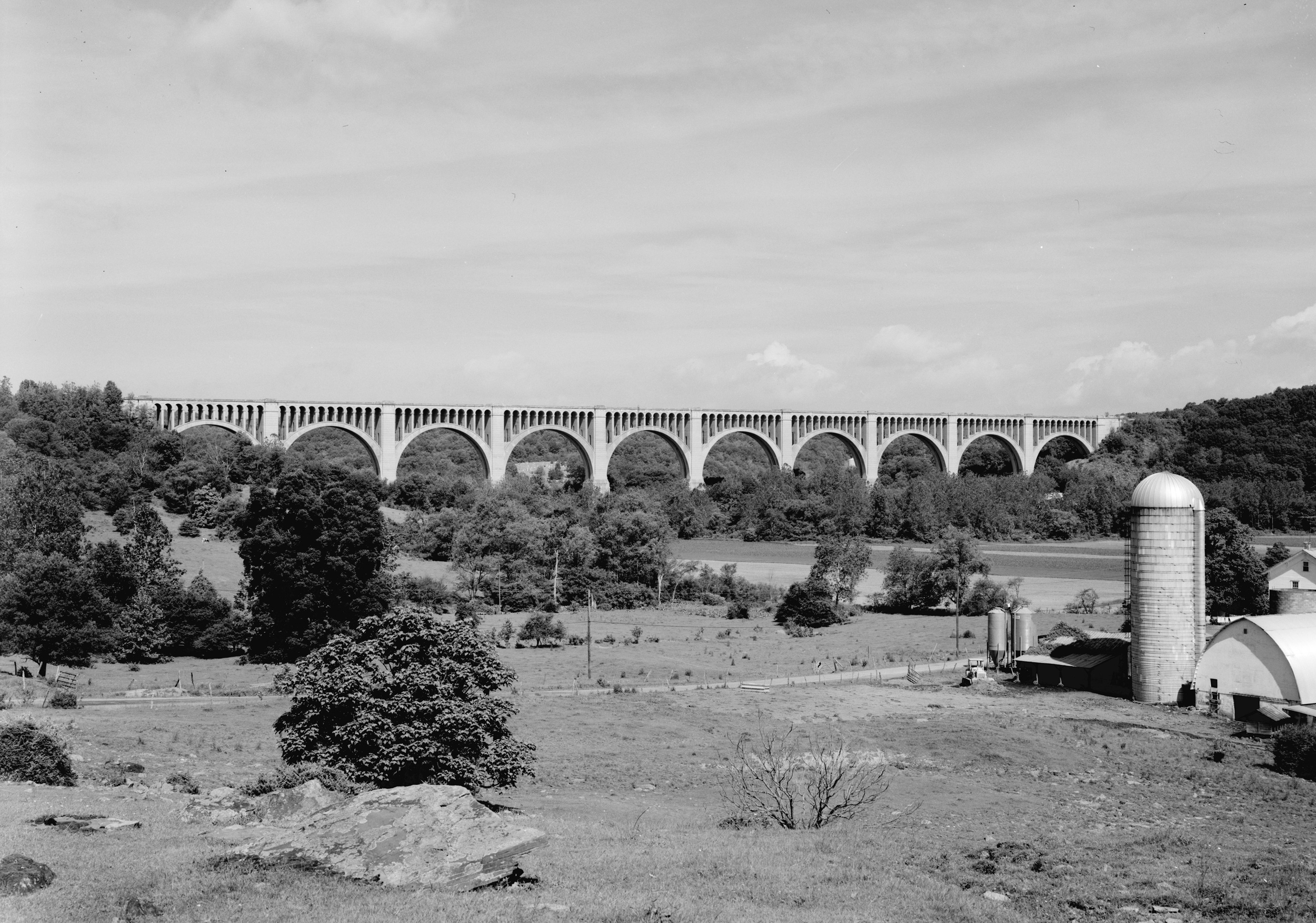 A westward view of Tunkhannock Viaduct looking towards Nicholson, Pennsylvania in a scene taken during the Erie Lackawnna era. 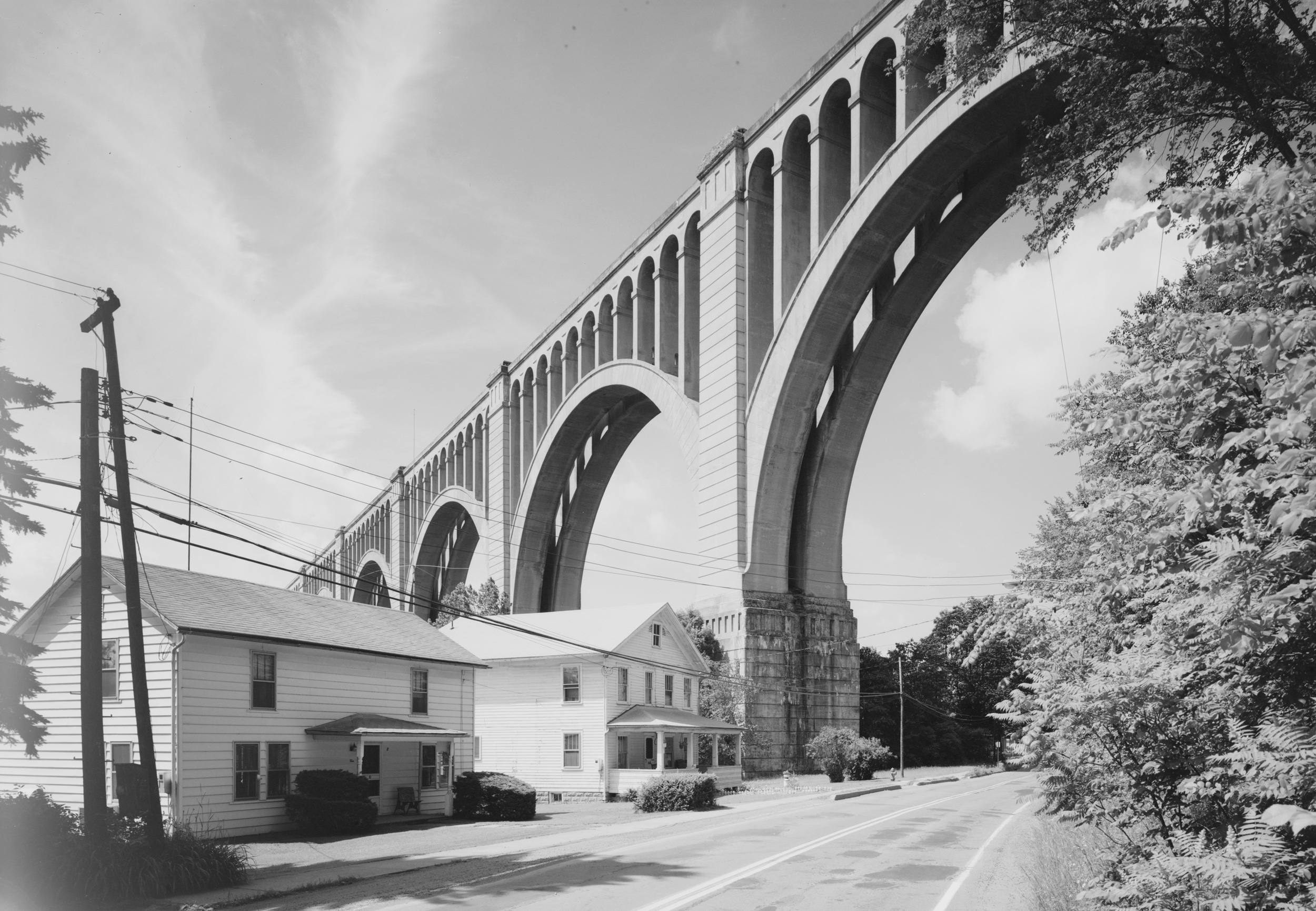 A ground-level view of the viaduct's massive arches, which spanned some 240 feet above the valley floor. 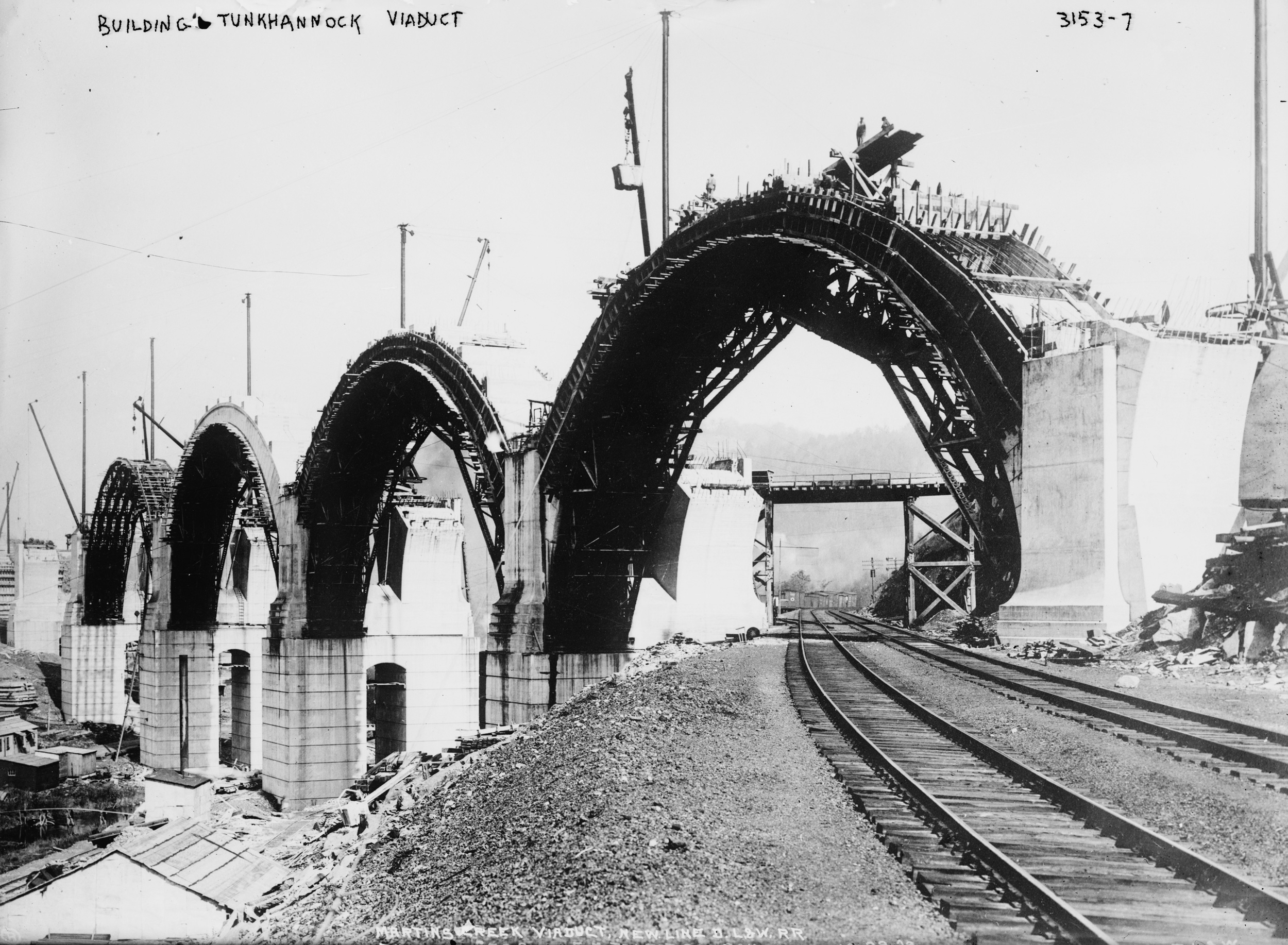 A view of Tunkhannock Viaduct under construction on October 22, 1913. You can see the old main line passing beneath the structure.

The massive bridge was built by contractor, Flickwir & Bush, and due to concrete being readily available, as the railroad served many plants along its lines (which is why the DL&W built so many structures from concrete, including stations and interlocking towers), it was ultimately chose as the material of choice (not to mention its incredible strength and durability).

To span the valley Cohen determined the viaduct would need thirteen pier supports, which spanned not only 240-feet to the valley floor but also an additional 138-feet underground to reach bedrock.

The bridge, which was designed to be double-tracked, features ten arched spans overall which cover the length of the valley at an astounding 2,375 feet (or more than a half-mile). Overall it took 167,000 cubic yards of concrete to build Tunkhannock.  For a bit more reading about the bridge please click here. 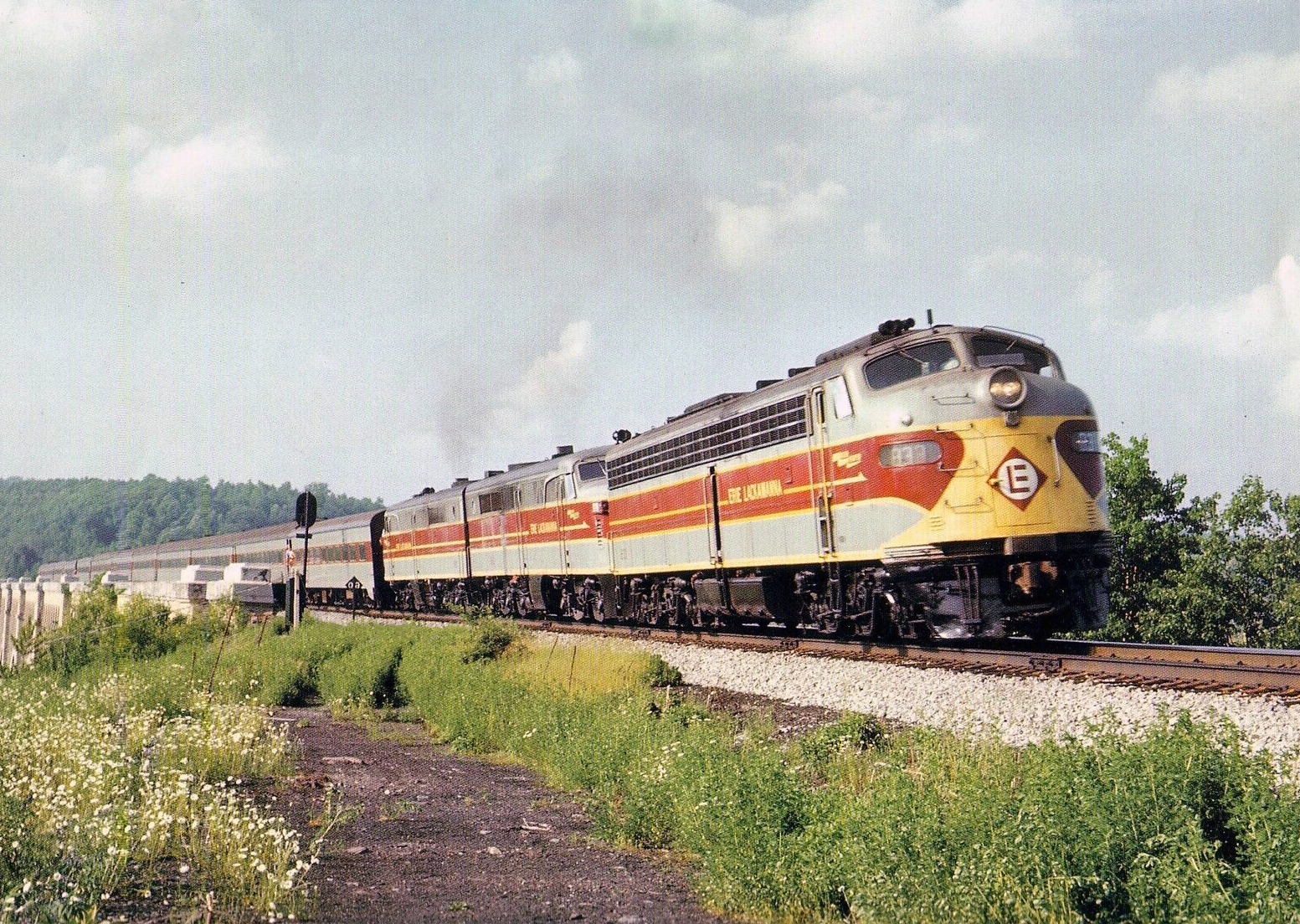 An Erie Lackawanna E8A, and a pair of PA's, lead a farewell excursion to the venerable Alco's over Tunkhannock Viaduct in June, 1968.

Despite the length and enormity of the viaduct, incredibly the bridge was completed in just about 3 1/2 years, opening on November 6, 1915. It remained in operation on the DL&W until 1960 when the railroad merged with the Erie to form the Erie Lackawanna, which continued to use the former Lackawanna main line.

After the EL's bankruptcy and inclusion into Conrail in 1976 the route was sold to the Delaware & Hudson Railway, which continued to use Tunkhannock until it came under Canadian Pacific control for many years until being sold to Norfolk Southern.  Today, Norfolk Southern itself still uses this National Historic Engineering Landmark, which is also listed on the National Register of Historic Places.