Missouri Pacific was another classic fallen flag that had an entire fleet of passenger trains with a common name, the Eagles. Most of these were regional in nature although two were long-distance consists, the Texas Eagle and Colorado Eagle.

While the Eagles are well remembered, particularly in the regions and cities they served the trains never carried the patronage of other famous fleets like the Union Pacific’s City trains or Southern Pacific’s Daylights.

The TE was the railroad's connection to the Midwest and Texas, serving most of the Lone Star State for over 20 years before handed over to Amtrak in the early 1970s.

Missouri Pacific, despite its chronic financial troubles, was once a dominate railroad in the Midwest.  Its spiderweb of main lines and secondary corridors stretched from St. Louis to the Gulf Coast and Colorado.

In the 1960's it acquired the Chicago & Eastern Illinois for direct entry into the Windy City.  To serve its many markets the railroad boasted an impressive fleet of trains. 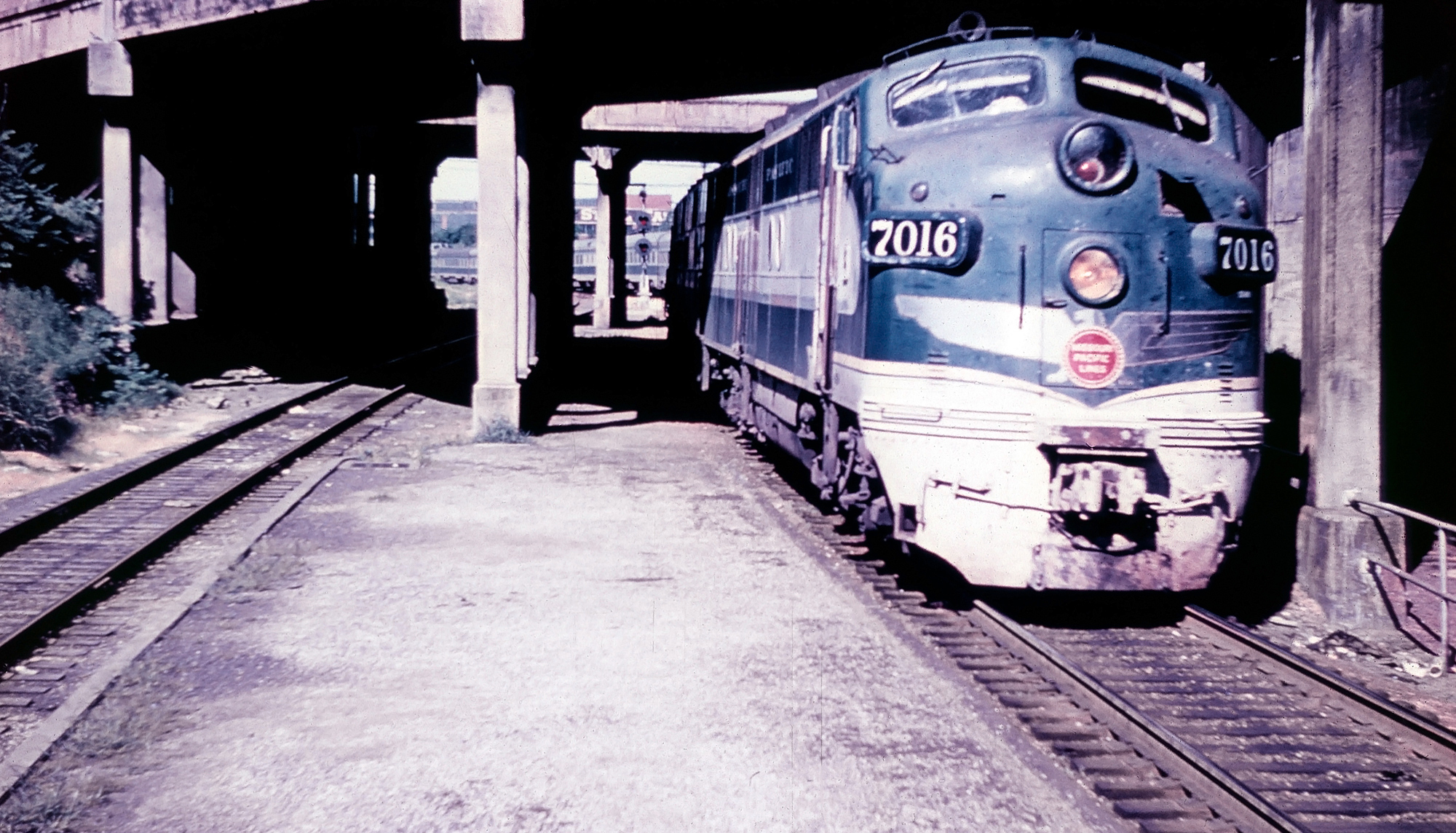 The Missouri Pacific, better known by railroaders and railfans as the “MoPac,” was never a strong company financially but it was always a fighter.

The railroad's predecessors were the first to build west of the Mississippi River and would eventually come under the Jay Gould empire, who owned scores of systems in the 19th century.

By also owning the Texas & Pacific the MP reached nearly all of Texas’s major cities and by the early 20th century had stretched across eleven different Midwestern and Western states from New Orleans and Memphis to Denver, Colorado and El Paso, Texas.

For all of the railroad’s mileage and size this did not necessarily turn into substantial profits and earnings. 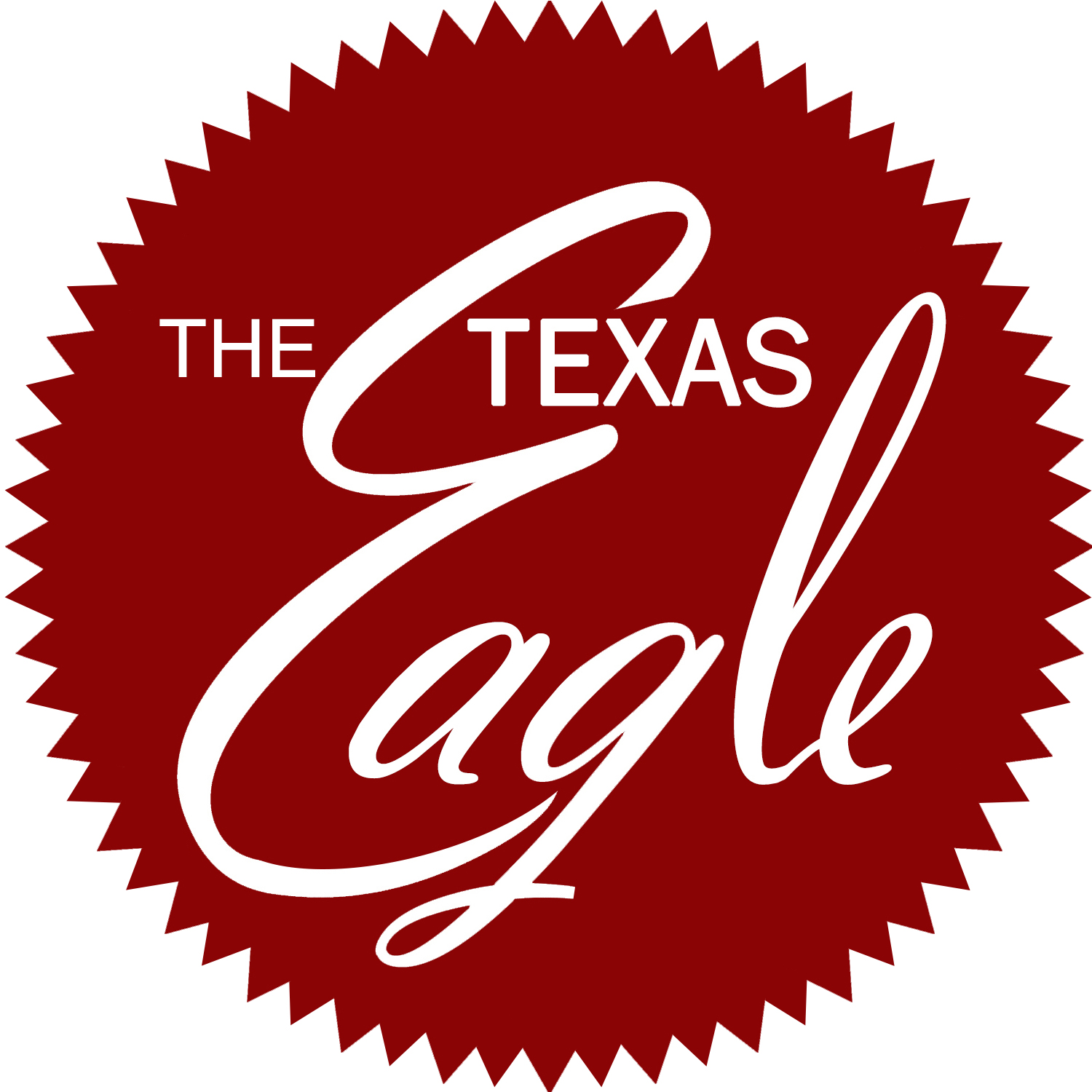 Between its earliest beginnings, through the mid-1950s the railroad witnessed over a half-dozen bankruptcies and reorganizations (the final occurring in 1956).

At first, the regional and (it covered almost 500 miles connecting the three cities) original Eagle was a six-car consist (with an early Electro-Motive E3 diesel for power) comprised of equipment manufactured by the American Car & Foundry.  The train field a diners, lounges, and a parlor-observation.

The regional Eagle fleet reached across all stretches of the MP and enabled passengers to connect to virtually any city in the Southwest or Midwest including Houston, Brownsville, San Antonio, Mexico City (yes, Mexico City!), Memphis, Tallulah (Louisiana), Denver, and Marshall, Texas (along with the aforementioned St. Louis, Kansas City, and Omaha).

The Missouri Pacific’s Texas Eagle debuted in mid-August of 1948 serving Memphis and St. Louis as well as several cities throughout Texas.

What the MoPac began as just the Eagle in March of 1940 blossomed into an entire fleet of Eagles including the Aztec Eagle, Missouri River Eagle (the original Eagle renamed), Valley Eagle, Louisiana Eagle, and Delta Eagle. 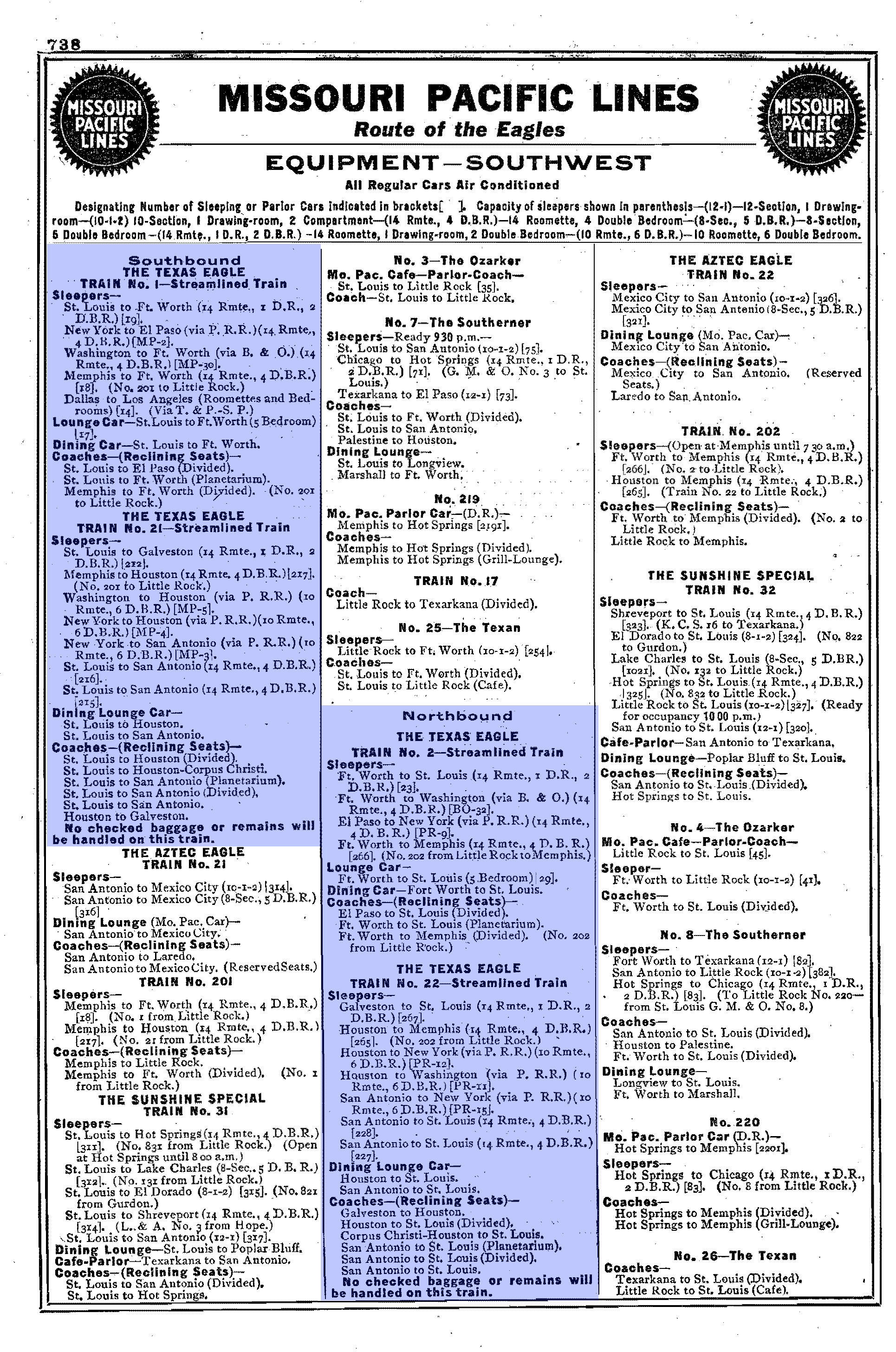 Like the rest of the fleet the TE featured dazzling designs on both its exterior and interior.  All of this came from noted industrial designer Raymond Loewy (of Pennsylvania Railroad fame, among others) who gave the fleet one of the all time classic liveries featuring an intricate design of dark blue, light gray, silver, and yellow with a chromed eagle flanking the nose of the streamlined diesels.

Interestingly, the TE (listed as trains #1 and #2) did not merely serve just two or three cities. From St. Louis the Texas followed a single route until it reached Longview where it “fanned out” in multiple directions serving such cities as El Paso, Dallas/Fort Worth, Palestine, Houston, Galveston, and San Antonino.

While riding aboard the train one could also reach points beyond those served by the MoPac including the East Coast via the Baltimore & Ohio and Pennsylvania at St. Louis.

With numerous connections and through sleepers available its timetable and scheduling could be a bit confusing to say the least.

Aside from through connections available one could also ride the Southern Pacific to Los Angeles via El Paso and even Mexico City aboard the National Railways of Mexico via Laredo!

Despite having so many different connections the Texas could usually complete any segment of its journey under 20 hours averaging anywhere between 45 and 50 mph.

Along with the Texas the entire fleet reached far and wide enabling passengers to connect to virtually any city in the Southwest or Midwest including Houston, Brownsville, San Antonio, Mexico City, Memphis, Tallulah (Mississippi), Denver, and Marshall, Texas (along with the aforementioned St. Louis, Kansas City, and Omaha). 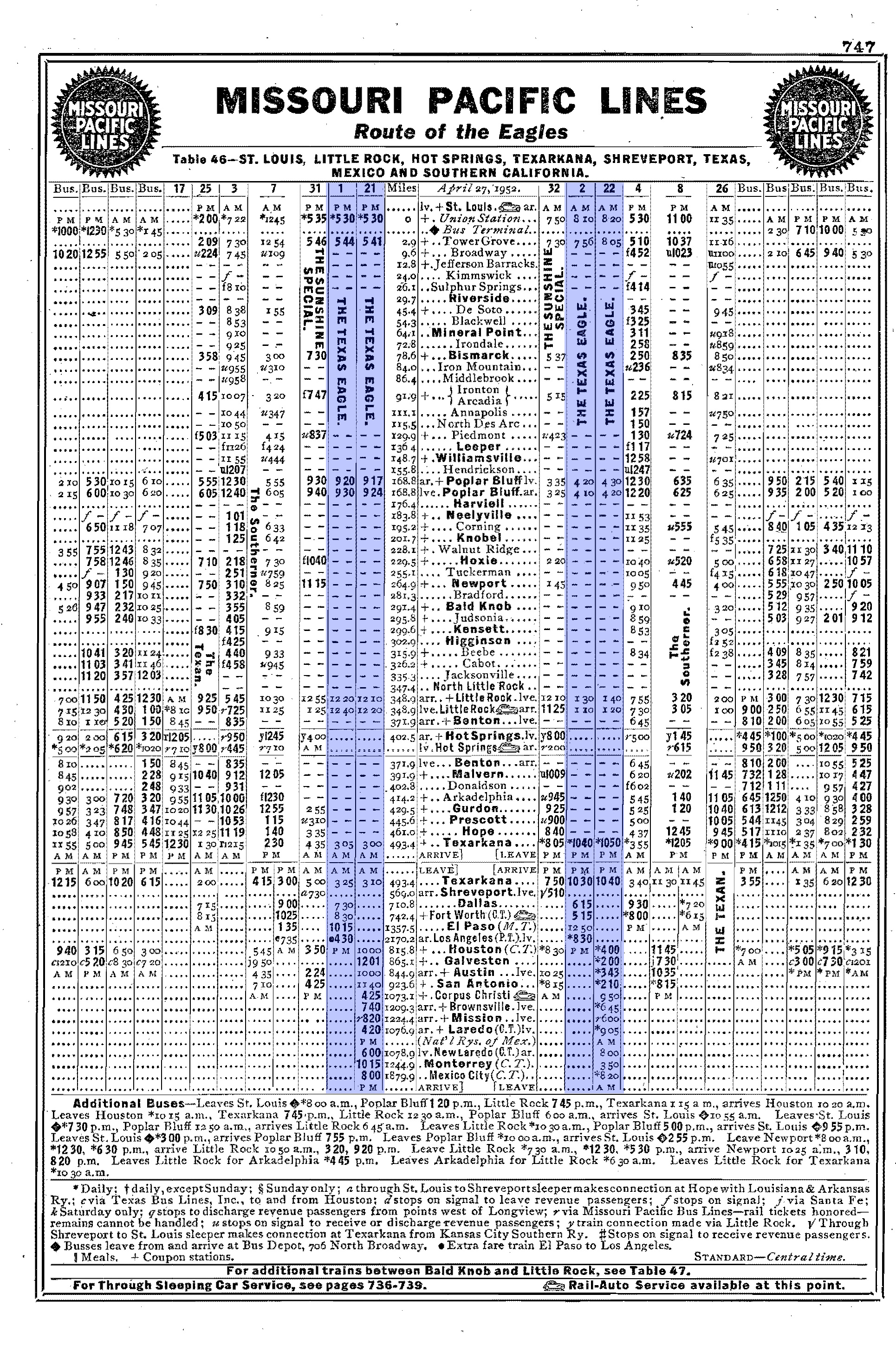 Despite this vast network the MoPac was plagued, like most other railroads, with ridership losses due to outside competition.

In the early 1960s mounting red ink forced the MoPac to downgrade or discontinue many of its regional services although fragments limped on until Amtrak took over intercity passenger train operations in 1971. 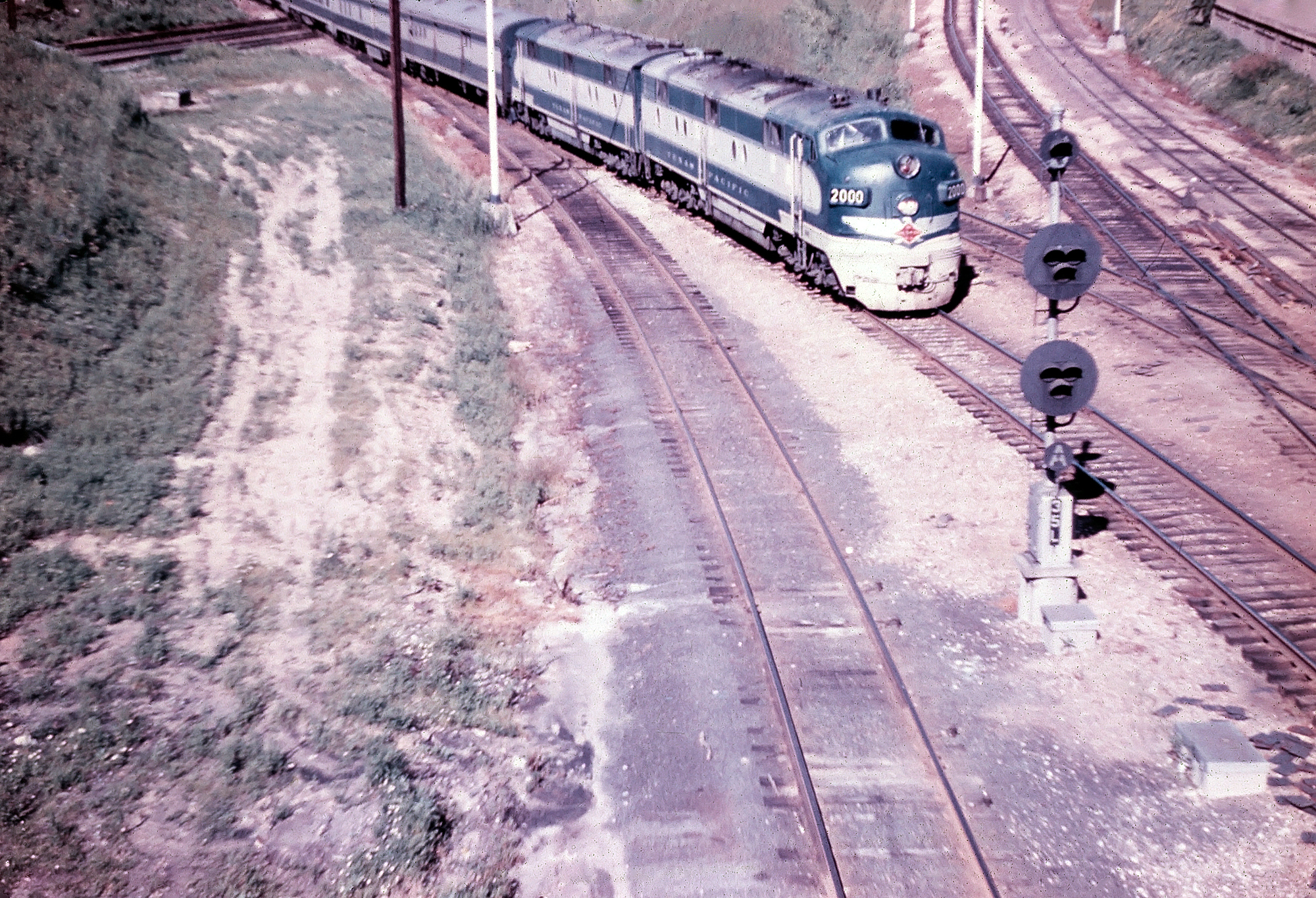 A pair of handsome Missouri Pacific E7A's, led by #2000, have the first section of the "Texas Eagle," at Tower Grove, Missouri circa 1957. American-Rails.com collection.

By the late 1960s the long-distance Texas and Colorado Eagles were not immune from the cutbacks.

By 1970 the Texas had lost all-Pullman status (thus reaching eastern points via the Pennsylvania and Baltimore & Ohio railroads was no longer an option) and had become a diminutive coach-only train between St. Louis and Texarkana.

Despite this it continued to field a few sleepers, a diner, diner-coach, and reclining seat coaches.  It was discontinued initially with the start of Amtrak but rejoined the timetable in October of 1981.