Seattle Union Station, located at South Jackson Street and 4th Avenue in the Pioneer Square, exemplifies what once was in terms of intercity passenger trains serving the city.

While the main terminal survives today it no longer functions in its original capacity with the staging tracks and platforms long since buried under redevelopment following Union Pacific's departure in the early 1970s.

At one time Seattle was served by two large stations; Union Station (owned by UP and later shared by the Milwaukee Road) and King Street Station, the property of Great Northern and Northern Pacific. 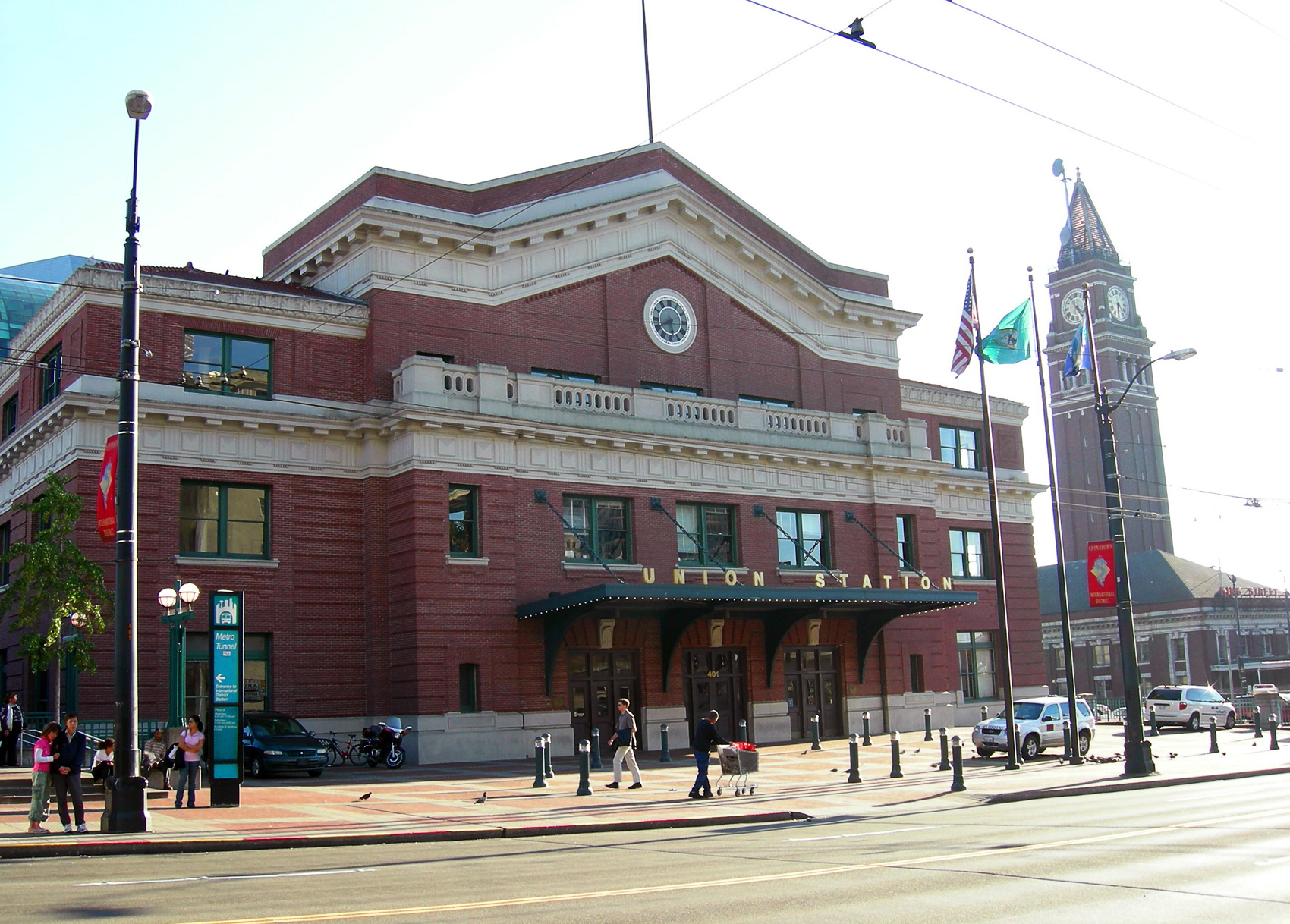 Union Station, originally known as the Oregon & Washington Depot for the company which built the facility (the Oregon-Washington Railroad & Navigation Company, a subsidiary of Union Pacific's Oregon Short Line), opened on May 20, 1911.

It was UP's attempt in answering the growing dominance of Great Northern and Northern Pacific, which had completed their beautiful King Street Station located just one block to the west in 1906.

The two stations sat literally right across the street from one another with Union Station at the corner of South Jackson Street and 4th Avenue while King Street was just across 4th Avenue.

Long before development obstructed the view, it was quite easy for passers-by to witness just how close these buildings sat beside one another.

For Union Pacific, the company had been expanding across the Pacific Northwest since the 1880s via several smaller systems eventually incorporated into the Oregon Short Line Railroad (most notably the Oregon Short Line & Utah Northern Railway and previously mentioned O-WRR&NC) allowing UP to blanket Idaho and parts of Oregon and Washington.

However, the railroad did not have coverage across the northern United States like GN and NP, which linked to the Twin Cities and Chicago via the allying Chicago, Burlington & Quincy.

Instead, UP's trunk line ran southeasterly to Cheyenne, Wyoming and terminated at Omaha, Nebraska and Kansas City, Missouri (it also reached Los Angeles thanks to control of the Los Angeles & Salt Lake Railroad). 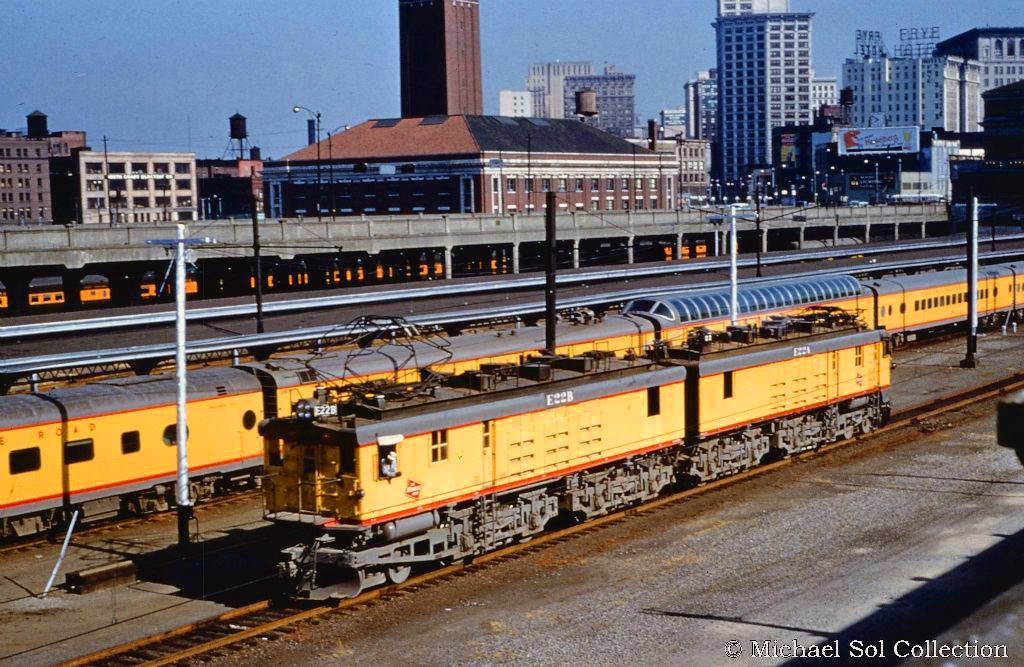 Milwaukee Road boxcab set E-22 and passenger equipment at Seattle Union Station during 1960. The Great Northern/Northern Pacific's King Street Station can be seen in the background. The Milwaukee adopted Union Pacific's Armour Yellow scheme for passenger service after the two began working together in October, 1955. Today, Union Station is preserved although this property has since been redeveloped. Photo from the Michael Sol Collection/University of Montana Archives.

The CM&StP began construction west from MoBridge, South Dakota in 1906 and opened for freight service in the summer of 1909 while passenger trains began running on July 10, 1910.

Union Station opened on May 20, 1911 and was soon joined by the Milwaukee Road.  According to Jim Scribbins' book, "Milwaukee Road Remembered," the railroad launched its first transcontinental services from Union Station on May 28, 1911, the Olympian and Columbian (Seattle - Chicago).

The two trains held title as the Northwest's first to use all-steel passenger cars.  In July of 1927 the Milwaukee completed its electrified lines into downtown Seattle at Union Station, instantly gaining appeal for the cleanliness they provided (remember that this was during the era of belching steam locomotives).

Prior to this event the railroad had its electrics lay over at Black River while steam locomotives, which featured headlights and a pilot on their tender (to back in and out of the terminal), ferried trains to the station. 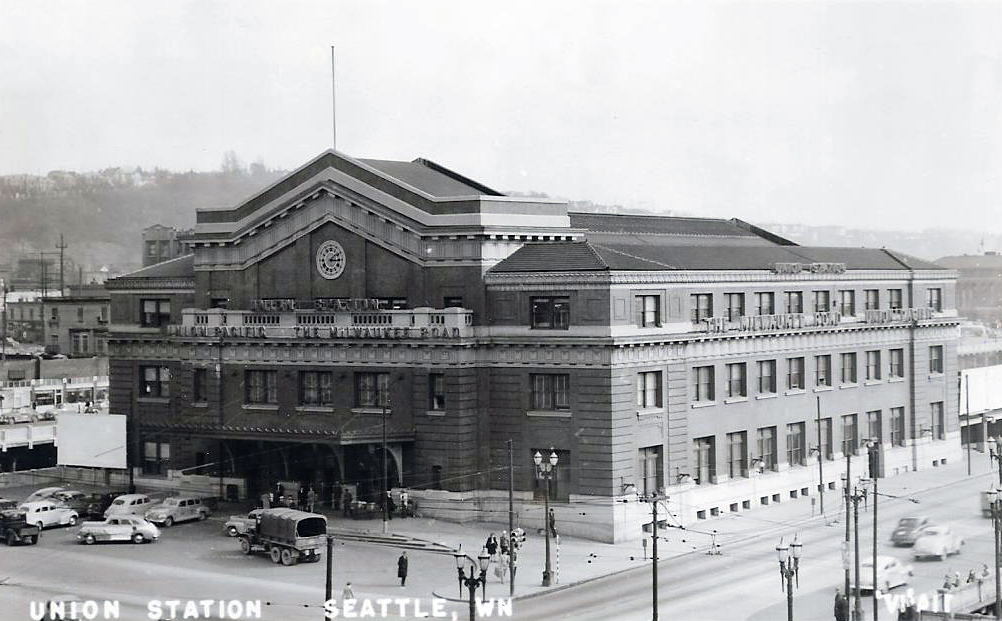 Seattle Union Station, as it appeared during the World War II era.

It is argued that Union Station was the more spectacular of the two terminals; built in the Beaux Arts style by architect Daniel J. Patterson.

Its centerpiece was the magnificent "Grand Hall."  The room's vaulted ceiling rose 55 feet above the floor while the arched concourse provided vast amounts of interior open space with large oak benches and beautifully tiled flooring. Of course, from an exterior standpoint the terminal did not quite compare to King Street.

With a rather simple design (three floors in total) and no clock tower it simply did not carry the same eye appeal as its next-door neighbor.

Union Station also had a major operational drawback; its stub-end design meant UP and Milwaukee Road trains had to back in and out of the facility while King Street Station featured a through design allowing trains to board and depart without dealing with such nuisances.

The addition of the Milwaukee Road offered a partnership with Union Pacific to compete against GN and NP.

Since the company's served different markets, passengers could travel through aboard the Union Pacific to cities such as Portland while UP travelers reaching Seattle could take the Milwaukee back east all of the way to Chicago if they so desired.

After it was upgraded with overhead catenary, day-to-day operations was an interesting and entertaining spectacle as quiet EP-1 "Boxcabs" and EP-2 "Bi-Polars" brought their trains into and out of the facility.

The streamlined era offered the last chance to see magnificent trains serving the terminal; the first was Union Pacific's City Of Portland launched on May 5, 1935 (also known as the M-10001 trainset) while Milwaukee Road's exotic Olympian Hiawatha entered service on June 29, 1947 replacing the Olympian.

Other notable UP trains calling at Union Station included the Portland Rose, Gold Coast, and Idahoan. 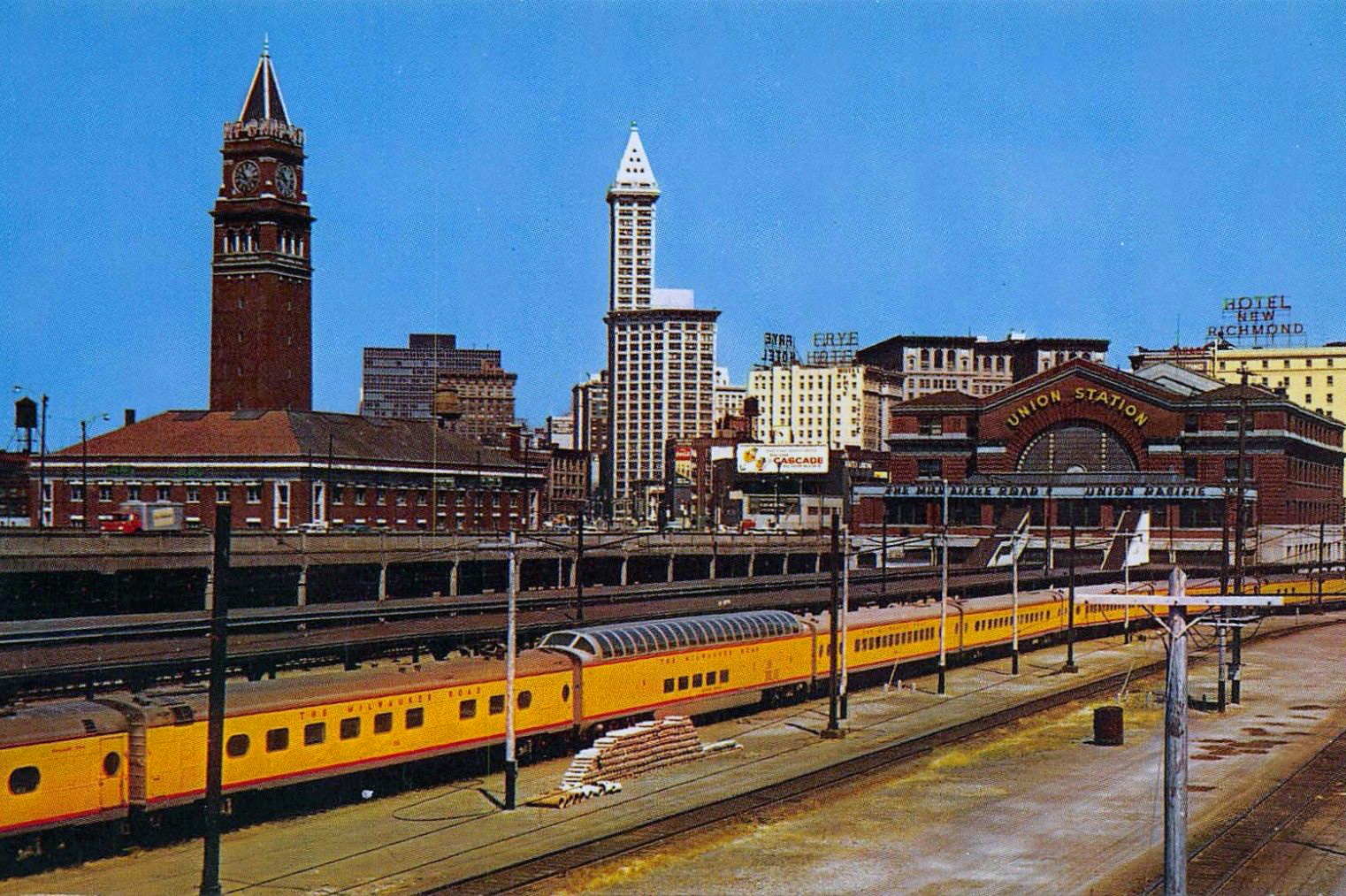 Seen here is Seattle Union Station's staging tracks and platforms. This photo, by Max Jensen, dates to between 1955 (when the Milwaukee Road and Union Pacific more closely aligned their passenger operations) and 1961.

After only 50 years serving the Pacific Northwest, Milwaukee Road pulled out of the passenger market in 1961, throwing in the towel to NP and GN, both of whom were just too well established by the time the company had launched its flagship train in the late 1940s.

Union Pacific would carry on for another ten years until it too stopped calling there after the 1971 startup of Amtrak.

Soon after this the approaches and staging tracks were demolished to make way for the ever-expanding development of downtown Seattle and large skyscrapers now stand where these tracks were.

Amazingly, while the building was left for dead it was eventually restored thanks to the efforts of Nitze-Stagen with financial backing from Paul Allen.

It reopened in October of 1999 and won the the 2000 National Historic Preservation Award for the efforts made in preserving the building's original architecture.

Today, it is listed on the National Register of Historic Places and houses offices of Sound Transit, the commuter rail agency that serves the Puget Sound region. You can also using the terminal's stunning "Great Hall" to host large events, such as business parties and weddings.