The Atlantic Coast Line had no shortage of trains serving the Northeast and Florida ranging from the flagship Champion to others such as the Gulf Coast Special.  The Vacationer was a late-edition to the ACL's lineup of seasonal services, established in the late 1930s.

It even once carried "All Pullman" status like that of the Florida Special (long considered the railroad's preeminent seasonal train) although for years provided travelers with a mixed consist of coaches and Pullmans (it was inaugurated as an all-coach service).

When ACL entered the streamliner fray, beginning in the late 1930s and continuing after World War II, the train eventually offered a mix of light and heavyweight cars.  Curiously, it seems the Vacationer was pulled from the timetable partially a result of logistical issues with other railroads.  It would make its final run during the mid-1950s.

With its acquisition of the Plant System during the early 20th century the Atlantic Coast Line gained a direct access to Florida.  By the 1920s the road had a number of seasonal Floridian services in operation including the premier Florida Special as well as the Miamian and Gulf Coast Limited (later named the Gulf Coast Special).

According to Larry Goolsby's book, "Atlantic Coast Line Service: The Postwar Years," despite the growing surge of streamlined trains hitting the nation after the mid-1930s the ACL was hesitant to do so. 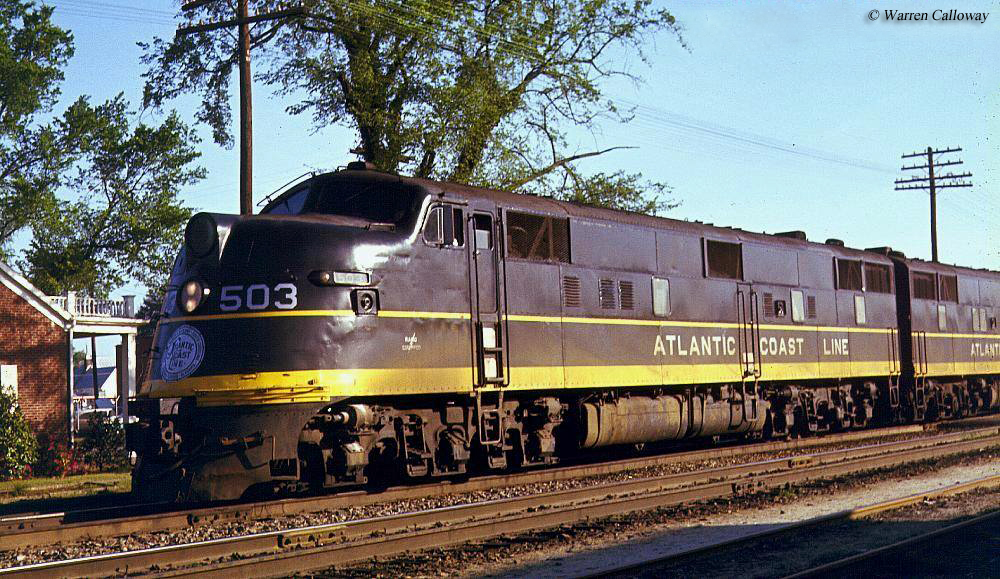 Instead, the railroad launched a new seasonal train known as Vacationer in 1938.  This new all-coach service featured a consist of reclining seats, among other accommodations, while through sleepers were provided to Tampa and St. Petersburg.

Interestingly, while the train proved popular, powered by ACL's new fleet of a dozen 4-8-4 1800s, the railroad was taken aback when rival Seaboard announced it was launching a new streamliner in early 1939 known as the Silver Meteor.

The train proved incredibly successful and Coast Line officials rushed to inaugurate their own version.  The new service came to be known as the Champion, featuring a lightweight, stainless-steel trainset from the Budd Company and powered by Electro-Motive's gorgeous E3 diesels adorned in a striking, exotic livery of Royal Purple and silver.

While the Vacationer was not streamlined at this time the ACL did reequip it in a way using overhauled heavyweight diners, coaches, and lounges sporting exterior striping (apparently to provide a mimicked streamlined look).

A History Of The Atlantic Coast Line

The railroad did its best to market the Vacationer.  One particular piece from the era noted the following:

"Between the east and Florida, coach passengers prefer all-coach service.  Vacationer, America's greatest Super de Luxe coach train.  Preferred by many because of its comfortable super de luxe coaches and earlier schedule.  Vacationer coaches and services are similar to those of 'The Champion.' "

"The Vacationer's radio-equipment, tavern-lounge car, one of the most beautiful in America, adds to the pleasure of a trip on this delightful all-coach train.  Service to all Florida East Coast points is operated in connection with Florida East Coast Railway - the only railway serving all East Coast resorts.  Atlantic Coast Line, 'the only double track route between the east and Florida.'" 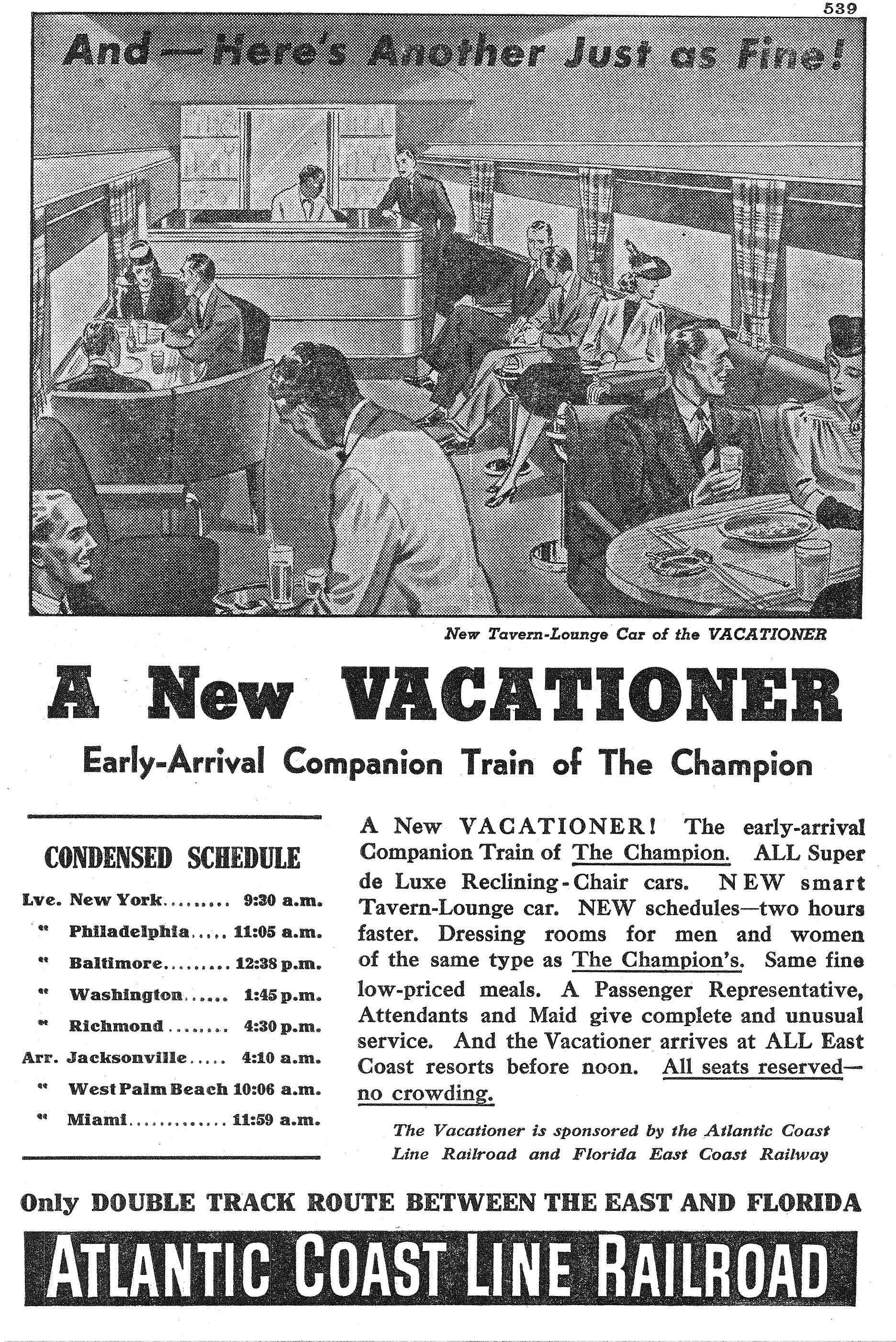 When World War II broke out in the United States following the bombing of Pearl Harbor on December 7, 1941 all of ACL's seasonal trains were canceled. Things remained unchanged until the war had ended, at which time the Vacationer, Florida Special, and Miamian returned to the timetable on December 12, 1946.

The postwar Vacationer was listed as trains #73 (southbound) and #74 (northbound) on the timetable.  As with all of ACL's Northeast-Florida services, assistance from other roads was required:

At New York, train #73 departed Pennsylvania Station during the early afternoon after 1:00 PM and arrived in Miami the next day at nearly 3:00 PM.  Its northbound counterpart, #74, left South Florida at 2:30 PM and returned to New York the following afternoon at 4:00 PM.

The ACL boasted its schedule at 26 1/2 hours for many years, which was later reduced to around 25 hours.  The Vacationer received a substantial upgrade in service for the 1947-1948 season when it became a coach-Pullman service similar to that of the Miamian.

After the war the railroad had embarked on a major upgrading of its fleet with lightweight, streamlined cars and new diesels from Electro-Motive (through the mid-1960s ACL stuck with EMD for virtually all of its primary road power).  While much of this equipment was assigned to other trains the Vacationer did receive some new coaches as well. 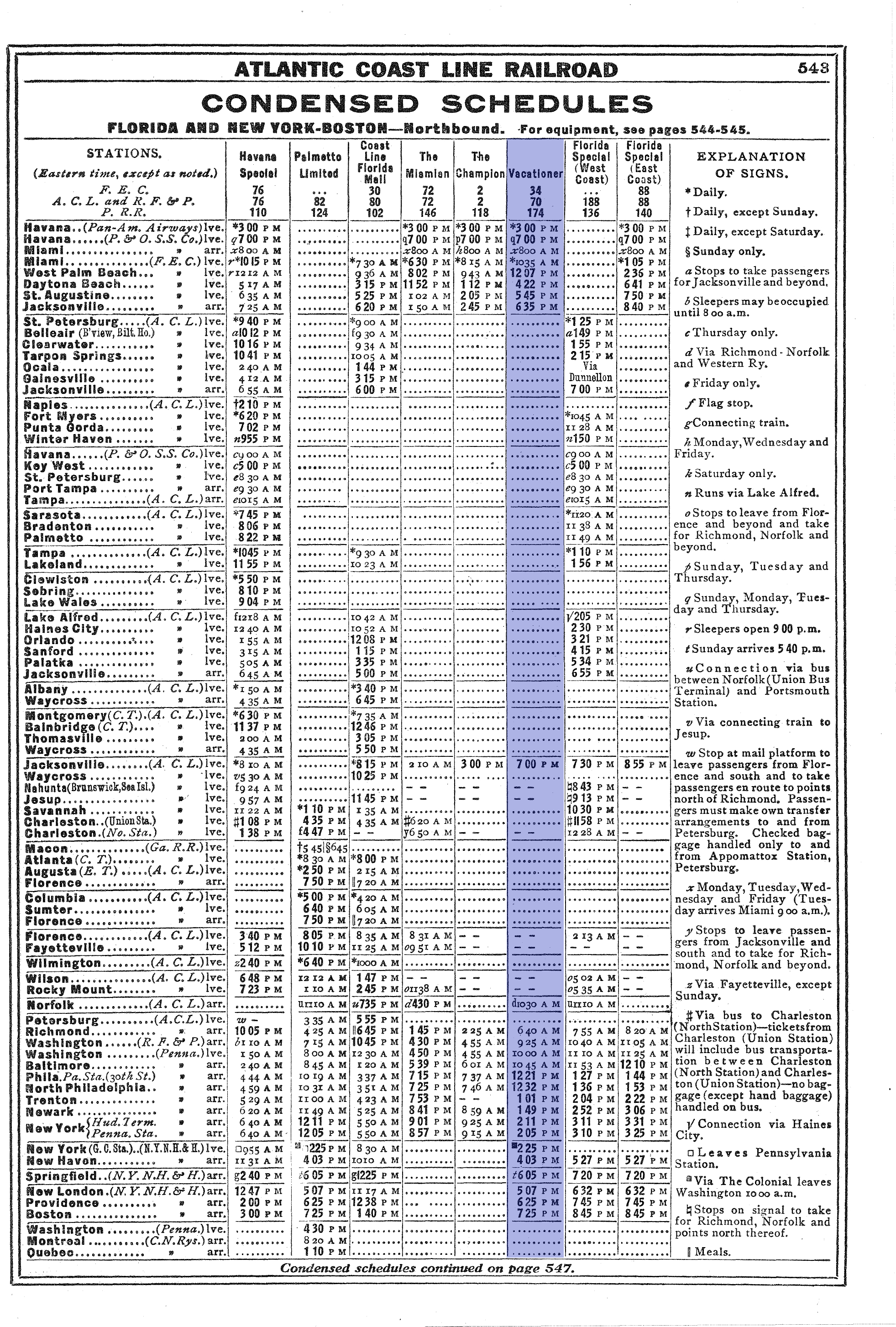 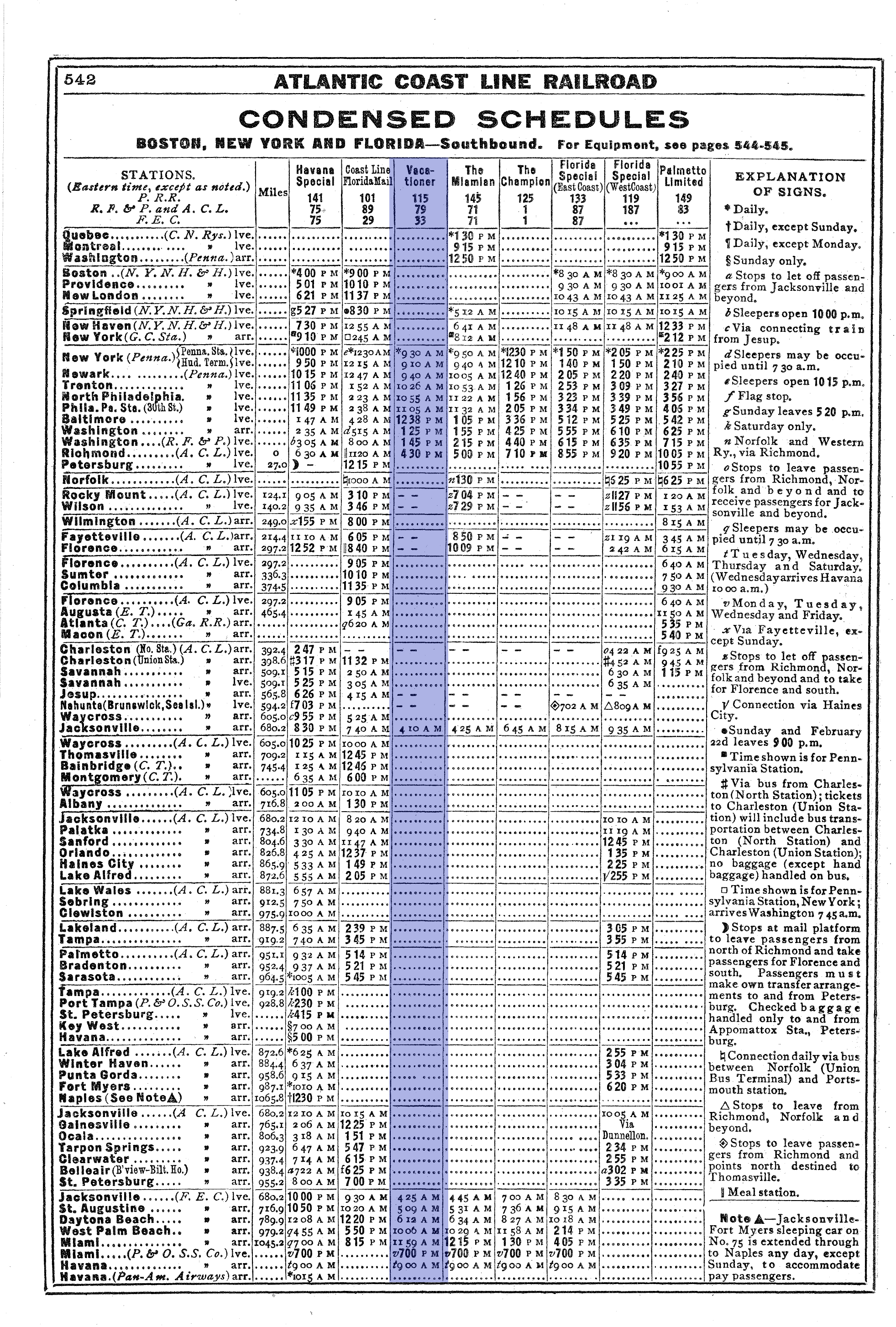 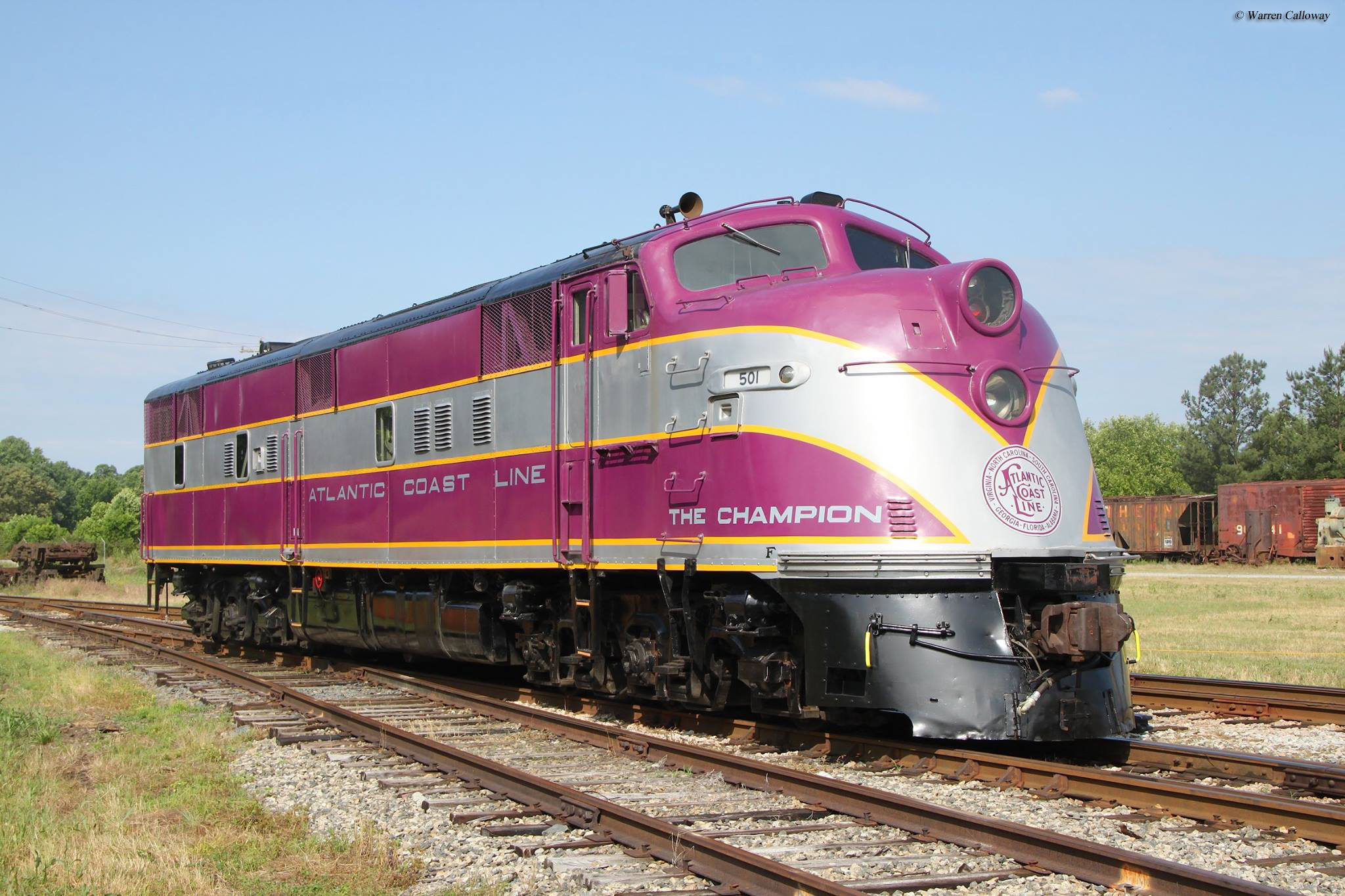 Another major change came to the train for the 1951-1952 season when it was further upgraded to "All Pullman" status, albeit reverting to a consist of entirely heavyweight cars, remaining this way during its final years of service.

As the 1950s progressed Mr. Goolsby's notes in his book the ACL was having difficulty with connecting roads to handle its trains.  For instance, in 1955 the Miamian lost its year-round service because the FEC felt it did not have the capacity for the summer months.

At around the same time the New Haven issued a similar directive stating it would no longer handle the Vacationer to Boston.  While the ACL could have continued offering the train to New York via its friendly Pennsy connection the company elected to cancel the train instead.