The Baltimore & Ohio's Thomas Viaduct was part of the company's realignment of its main line in the mid-1830s to a more southerly heading that would eventually connect to Washington, D.C., officially known as the Washington Branch (it technically did not become part of the railroad's through main line until the late 1860s).

It is the oldest multi-span masonry arch bridge of its kind and one of the oldest railroad bridges that is still in use today, carrying countless CSX Transportation freight and MARC commuter trains daily. Today, the viaduct has received the rare honor as a National Historic Landmark.

Publicly, Thomas Viaduct became one of the most famous location along the fabled B&O.  The railroad regularly used it for marketing purposes, such as in the photo below.

In one particularly noteworthy setting, the "Royal Blue" was posed alongside Britain's "Coronation Scot," led by 4-6-2 #6229, the "Duchess of Hamilton."  This locomotive was owned by the London Midland & Scottish Railway and still survives today.

While the B&O always kept the bridge maintained to very high standards, including its wrought-iron railing, this attention to detail faded as the years passed. 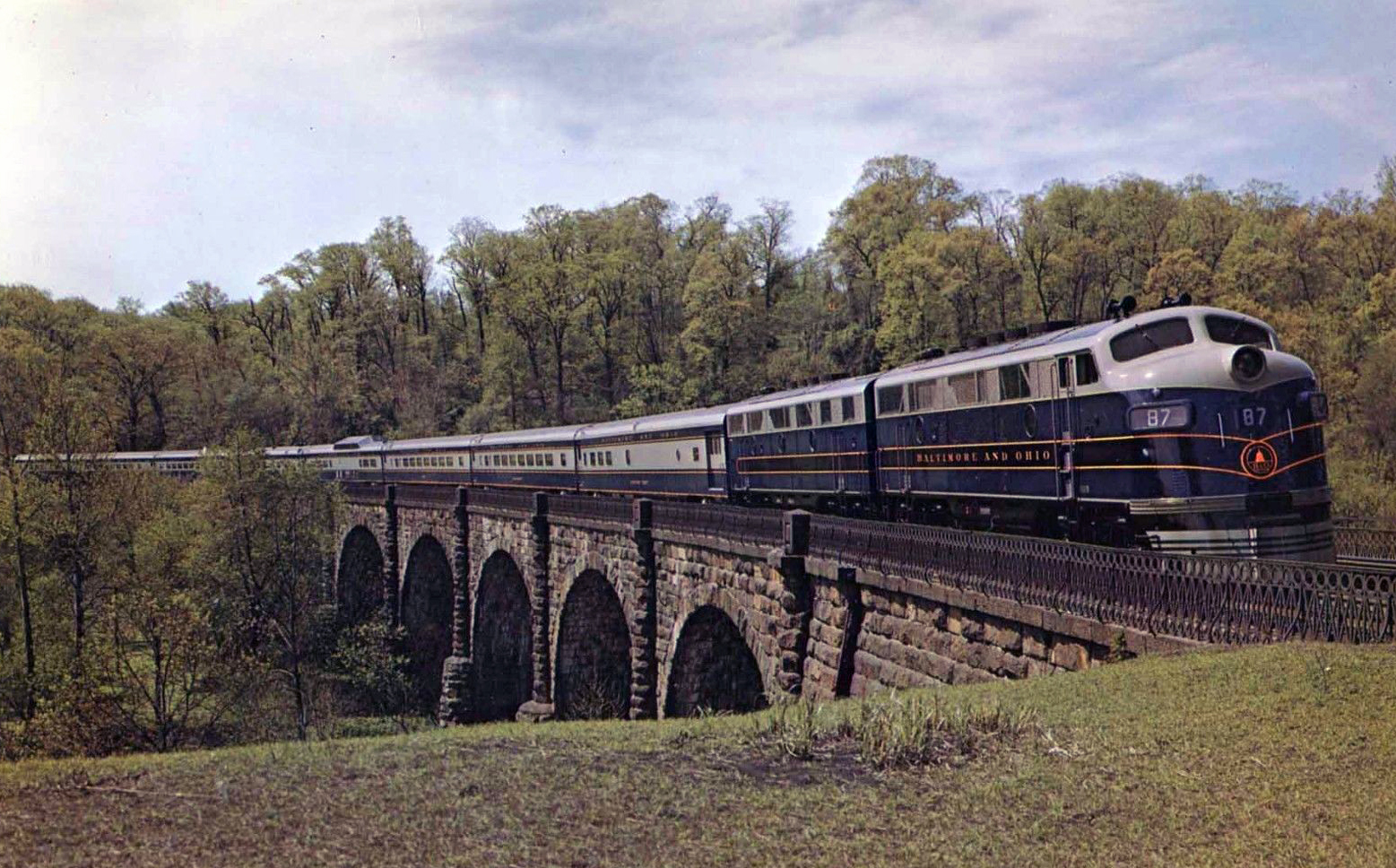 In this Baltimore & Ohio company photo the newly reequipped "Columbian," powered by an A-B- set of F3's (note the new Strata-Dome mid-train), poses on historic Thomas Viaduct (Maryland) spanning the Patapsco River during the spring of 1949.

After the being was acquired by the Chesapeake & Ohio and then joined the Chessie System consortium in 1972, company policy shifted away from maintaining property to such high standards.

Unfortunately, this was not isolated to the B&O the industry, in general, lost interest.  There were several factors involved, from declining revenues to the discontinuance of passenger trains.

Today, CSX has been criticized several times for its maintenance of this National Historic Landmark; trees and shrubs grow from crevices in the stone and the railing is in desperate need of repair and overhaul. The viaduct was the first major project on the Baltimore & Ohio's recently planned Washington Branch to connect the nation's capital.

The line diverged at Relay, Maryland and less than a mile away was the Patapsco River and Patapsco Valley, both of which need to be crossed. At the time construction commenced on the bridge on July, 4 1833 the Baltimore & Ohio had yet to reach Harpers Ferry, Virginia.

The railroad was also in money trouble during the bridge's construction. It had virtually used up all of its funding to date and had yet to not only reach Cumberland, Maryland but also to establish any viable means of traffic.

The viaduct was designed by Benjamin Henry Latrobe, Jr. with actual construction carried out by contractor John McCartney (McCartney was ultimately awarded the job to build the the viaduct since he had successfully built the nearby Patterson Viaduct a few years earlier).

The major issue in building the bridge was the curve required, which had never been attempted before in American history. To accomplish the task the seven piers carried a wedge shape to compensate for the 4 degrees of curvature needed. 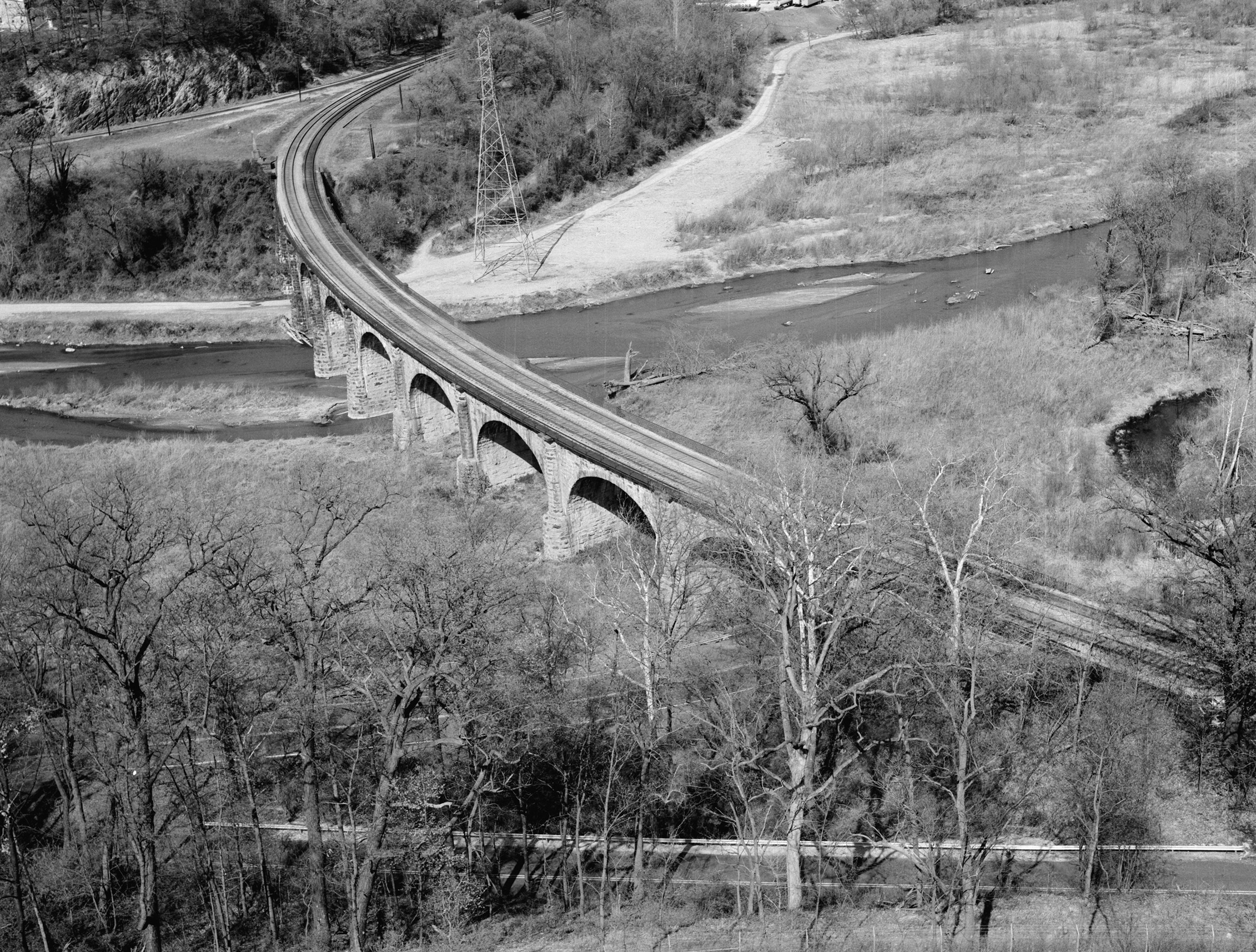 An aerial view of Thomas Viaduct, looking towards the northeast, as it appeared in April, 1971. Note that the Baltimore & Ohio's main line, bound for points east and west, can be seen in the background. Jack Boucher photo.

When construction of the bridge was finished, officially on July 4, 1835, it spanned 704-feet in length and was the longest stone-arch masonry bridge of the time.

It featured eight arches, which were 59-feet in length and was wide enough (roughly 26-feet) to accommodate two tracks, which it still carries today.  The bridge received its name, Thomas Viaduct, after the B&O's first president, Phillip Thomas.

Over the years, and especially during the streamliner age, the B&O regularly used the structure to stage publicity photos of its latest trains or notable locomotives such as the fabled Royal Blue (Washington/Baltimore - New York), Capitol Limited (New York - Chicago), and the first streamlined diesel locomotive for regular, main line service, Electro-Motive's stylish "EA." 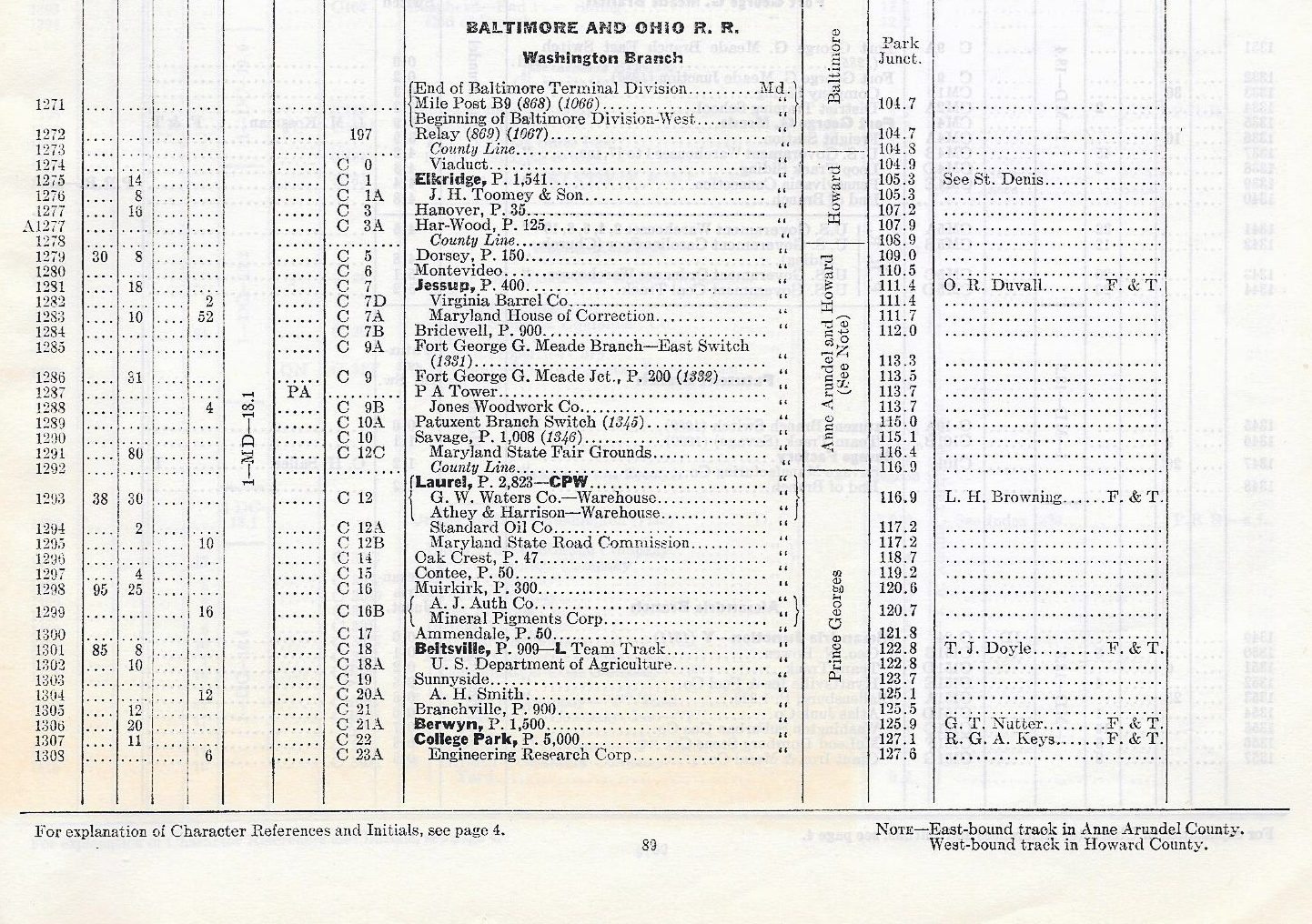 From the Baltimore & Ohio's 1948 "Official List" you can see the location of what was named only as "Viaduct" on the Washington Branch. Author's collection. 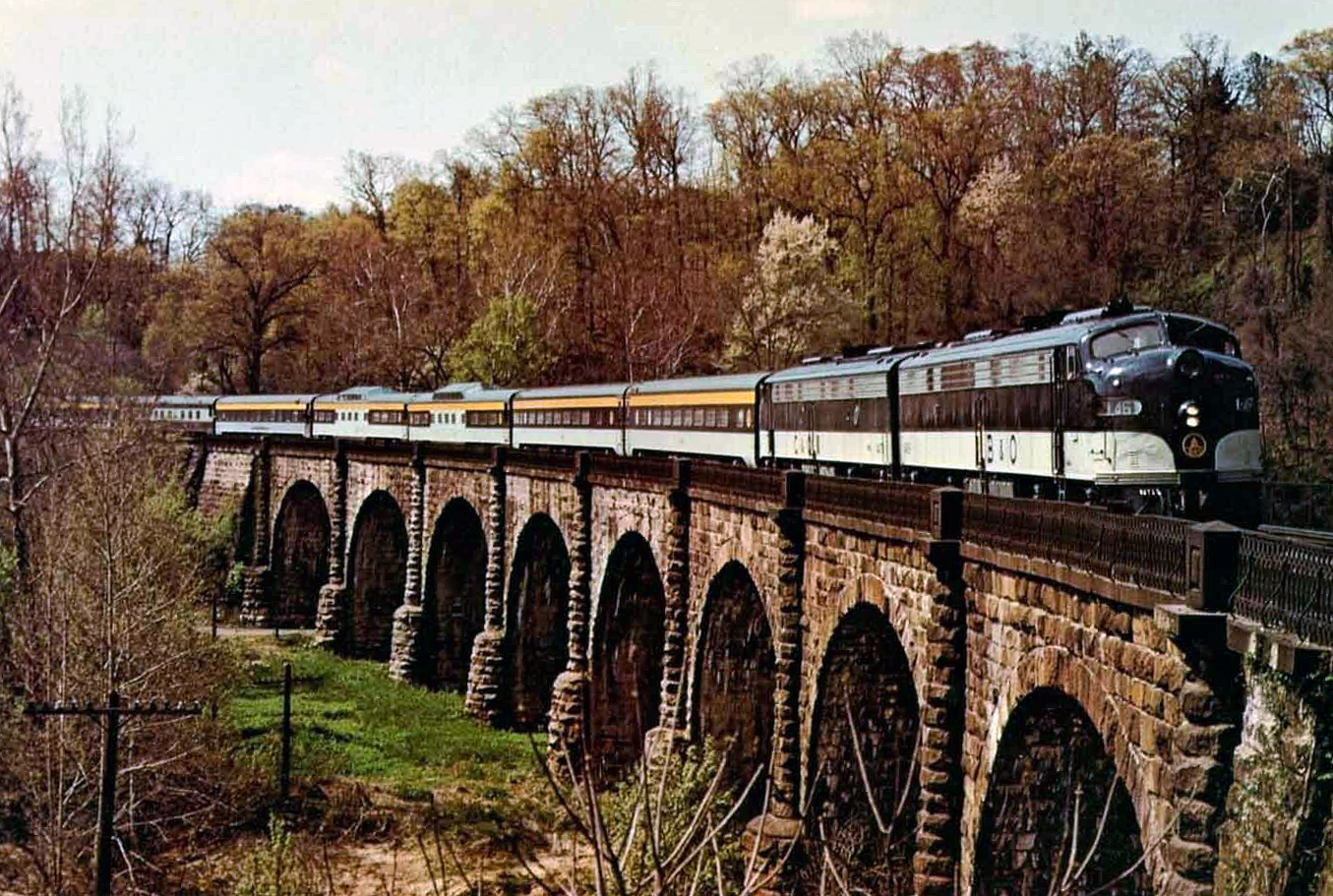 The Baltimore & Ohio was always very cognizant of its storied history. Here, the final "Capitol Limited" is posed on Thomas Viaduct on May 1, 1971. James Jeffrey photo.

To honor the completion of the bridge, the contractor John McCartney, had a 15-foot obelisk built with the names of the builder, chief engineer, superintendent, board of directors and designer inscribed on the monument. The original obelisk has since been destroyed but a replacement now stands in its place.

In the summer of 2010 the viaduct celebrated its 175th anniversary and in conjunction with the milestone it has become known that two preservationists, John Slater and Jim Dilts, are spearheading  an effort to create the Thomas Viaduct Park to help maintain the bridge and make visitors aware of the structure's historic and engineering noteworthiness.