The Wellsville, Addison and Galeton Railroad, also known as the WAG for short (it gained its nickname as "The Sole Leather Line" due to the tanneries it once served), was a short line operation which dated to the late 1950s.

Its startup was thanks to the Baltimore & Ohio, which was looking to rid itself of predecessor trackage in upstate Pennsylvania and southern New York that had been recently damaged in flooding and was no longer connected to the rest of its system.

Additionally, many of the lines were an operational headache given their extremely stiff grades and tight curves.

The WAG was given light steam locomotives as original power but quickly switched to small diesels instead with its largest power being late model Electro-Motive covered wagons.

Unfortunately, while a charming, bucolic line the WAG was never particularly profitable. This was compounded by several floods over the years and customers that began to close not long after the line reopened. After a valiant effort it ended all operations in the late 1970s. 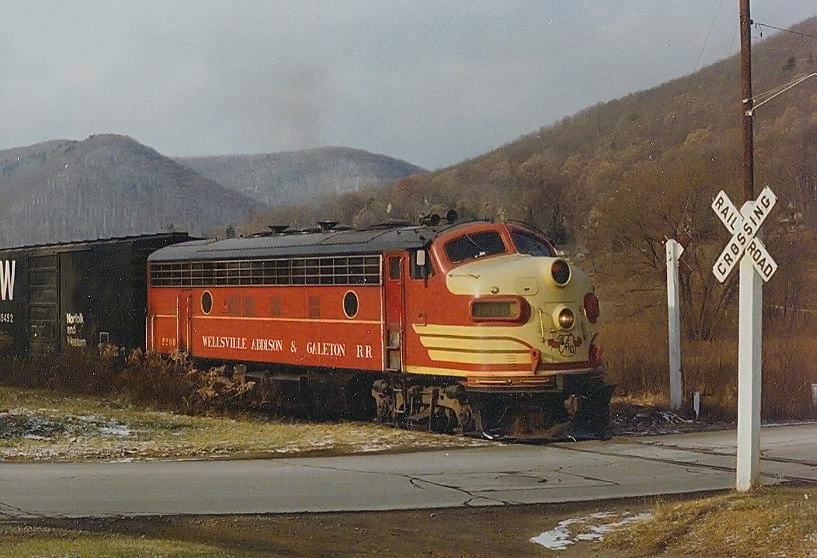 Wellsville, Addison & Galeton F7A #2200 leading an eastbound freight through a rural grade crossing near Galeton, Pennsylvania on November 24, 1976. The train is heading for the Conrail interchange at Ansonia. Doug Kroll photo.

The history of the Wellsville, Addison and Galeton Railroad can be traced back to a businessman by the name of Frank H. Goodyear.

In the 1880s he began buying up large tracts of timber in northern Pennsylvania and southern New York with the hopes of moving coal, lumber, and other freight to his businesses in Buffalo.

Initially, he organized the Sinnemahoning Valley Railroad from Keating Summit to Austin, Pennsylvania where he had a sawmill (one of many) located opening in December, 1885. 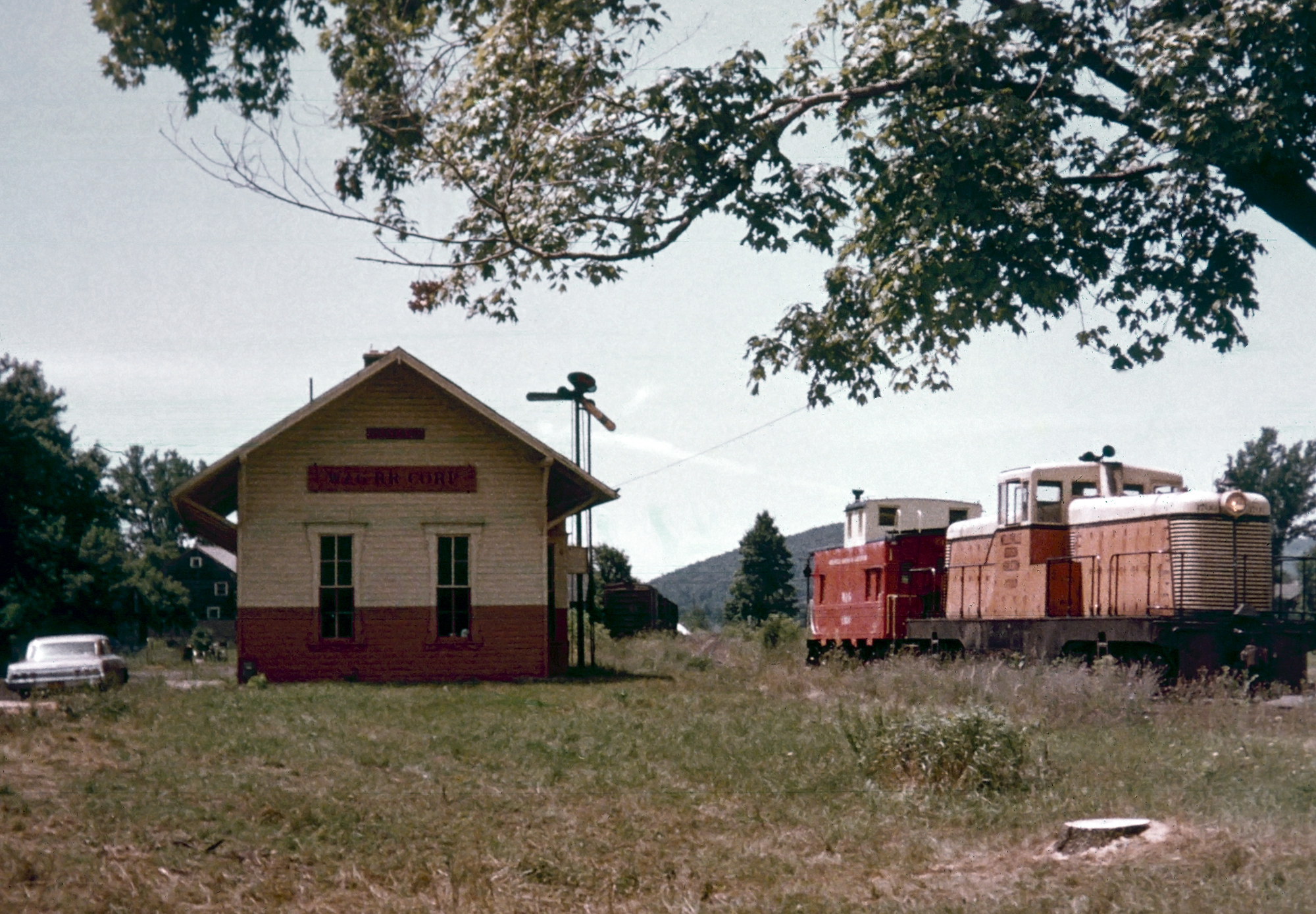 Wellsville, Addison & Galeton 132-tonner #1700 (built as Ford #1006) lays over in the weeds in front of the depot at Elkland, Pennsylvania during the 1960s. Ed Lewis photo. American-Rails.com collection.

In 1895 the railroad extended from Galeton to Wellsville where it connected with the Erie Railroad and purchased the 10-mile Wellsville, Coudersport & Pine Creek Railroad to Hikcox.

In 1898 it extended to Addison (New York) via Galeton and the Addison & Pennsylvania Railroad. As the company continued to grow into the 20th century it built numerous spurs and branches, predominantly serving coal mines to grow traffic although it's ultimate goal was Buffalo.

By 1906 its line to Buffalo was opened and in 1907 the entire system became known as the Buffalo & Susquehanna Railway.

At its peak the company was more than 400 miles in length but riddled with steep grades. The Great Depression was hard on the railroad allowing the B&O to purchase it in 1932 along with neighbor Buffalo, Rochester & Pittsburgh.

Neither the BR&P or the B&S were particularly profitable properties for the Baltimore & Ohio although both did provide the eastern trunk line with access to new coal mines as well as Buffalo.

The railroad experienced continual sinking profits after World War II and a flood during the war in 1942 isolated the system south of Burrows, Pennsylvania. 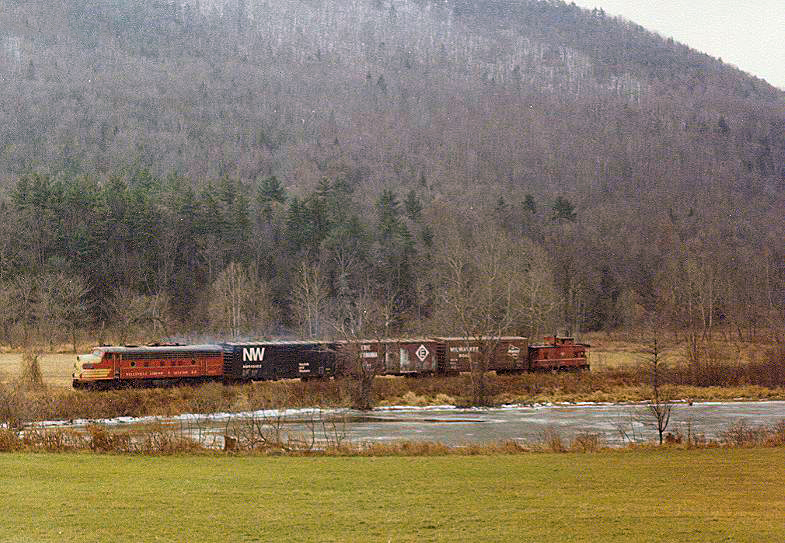 This gave the WAG a system of about 99 miles in length. While the B&O initially gave the new owner former B&S light steamers, Salzberg quickly ditched them in favor of diesels, mostly former Rock Island 75-ton units built by Whitcomb.

However, the stiff grades forced the railroad into needed better power where the line to Wellsville featured hellish 2.85% grade at one point. In its place GE 125 Tonners and 132 Tonners took their place, and for the time being provided amble power for the railroad's needs.

By the late 1950s this allowed the WAG to sell off its remaining steam locomotives and light diesels. At this time traffic was still quite good with freight ranging from oil products and the Sinclair Oil Company to local tanneries (the refinery was large enough that the WAG stationed a diesel to switch the property daily).

An official, 1958 timetable of the Wellsville, Addison & Galeton. Author's collection.

However, after just two years in service things began to go south for the WAG. In 1958 Sinclair closed its refinery dealing a huge blow to the railroad as it was its largest customer.

Soon afterward a bridge on the Addison Branch was deemed structurally unsound forcing the short line to simply close the route and maintain its own interchange with the Erie at Wellsville. 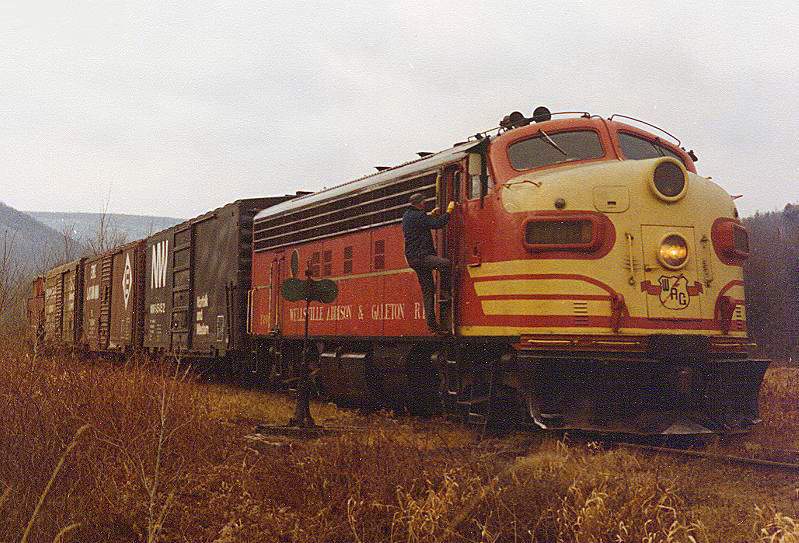 The same train as pictured in the above photos has now reached the Conrail interchange as a crewman hops down from the cab of the F7A to uncouple the cars. Doug Kroll photo.

This move cut the line back to Elkland. In 1964 the WAG saw its final growth: after the New York Central abandoned its paralleling branch between Westfield and Elkland, the short line picked up pieces of the line to serve remaining customers.

Additionally, it purchased the small, 16-mile Coudersport & Port Allegany Railroad (C&PA) between Ulysses and Coudersport via a connection with its main line at Newfield Junction.

In 1968 the company further expanded its motive power fleet by picking up six F7s, an F7B, and an FP7 which truly helped to tackle the tough grades.

However, by the turn of the decade the Wellsville, Addison and Galeton Railroad's situation continued to worsen. In 1970 it abandoned its Wellsville Branch and virtually all of the C&PA it acquired just six years earlier.

In 1971 its original 1894 carshops were destroyed forcing the company to replace the facility with a smaller operation.

Then in 1972 the ailing Penn Central canceled its lease contracts on WAG freight equipment. Also in 1972 it lost the Elkland tannery traffic to a major fire (then the railroad's largest remaining customer) and the remnants of Hurricane Agnes caused additional flooding that fall.

More flooding occurred in 1975 from another former tropical system, Hurricane Eloise, and as traffic continued decline the railroad petitioned to abandon the remaining 40 miles of its system in April, 1976. 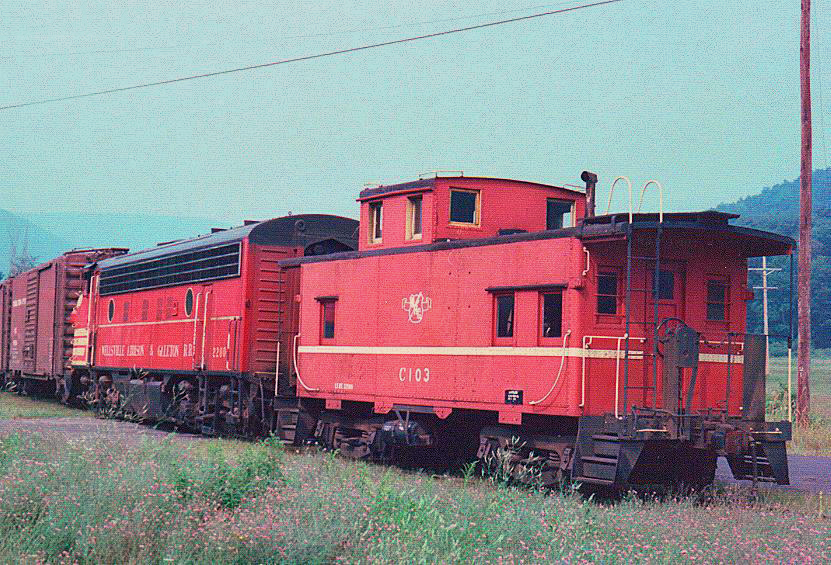 With the caboose now tagging along behind the F7A the crew shoves their three boxcars into position at the Conrail interchange at Ansonia. Today, all of this is now but a memory. Doug Kroll photo.

The Interstate Commerce Commission granted this request in March 1978 and the Wellsville, Addison and Galeton Railroad ceased to exist as a railroad after November 7, 1979 upon which the final rail movements were made to pull out remaining equipment.

It is somewhat interesting that the WAG was created during the era of what railfans considered the classic age, after World War II through the 1970s when paint was colorful and early diesel locomotives reigned supreme (and alongside the last fleets of steam locomotives).

As such, the small short line is often considered a classic, despite only operating for about 24 years. Perhaps also this is because the railroad offered such unique, "down home" operations drawing it to enthusiasts as well as displaying a charming livery of white and red.