The water tower was once a common sight along both important railroad main lines as well as secondary/branch lines all across the country.

These structures were originally built out of wood and then later designed from steel and/or concrete.

However, wooden devices stood the test of time and were still being used well into the 20th century, some of which continue to survive today as either preserved relics or still functioning as originally intended.

Whatever their construction material, water towers for a vital piece of infrastructure holding thousands of gallons of water for locomotives at strategic locations; some railroads had just one while others maintained thousands.

Covered here is a brief history of these devices and the role they played for more than a century before steam was retired in favor of the diesel. 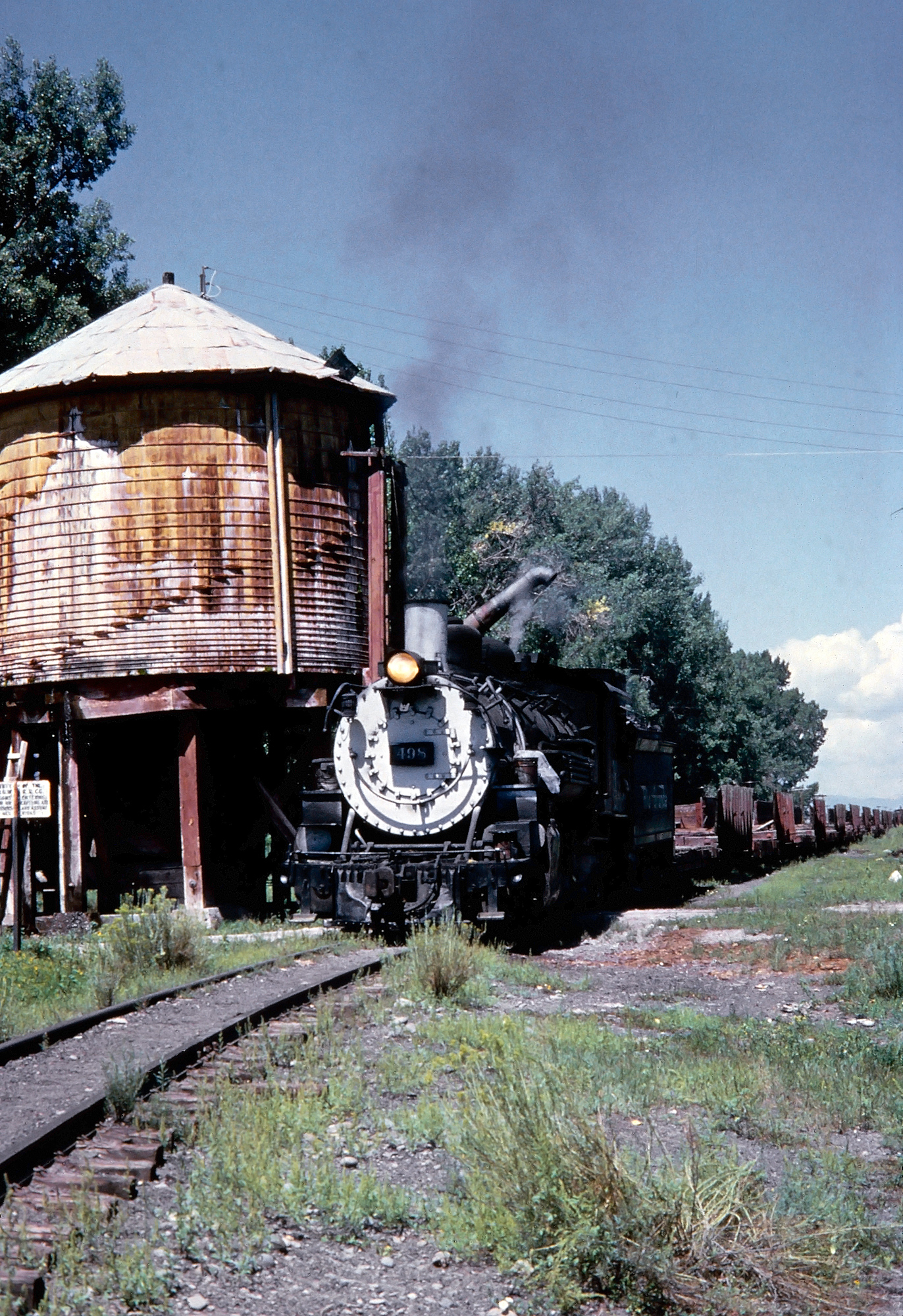 Rio Grande 2-8-2 #498 (K-37) stops for a drink at the water tank at Pagosa Junction (Gato), Colorado with an eastbound string of empties in the summer of 1968. American-Rails.com collection.

The device which stored water for locomotives had a handful of designations over the years such as tower, column, station, and stop.

Whatever the name its purpose was the same, a place where locomotives could replenish their greatly needed water supply, which was typically exhausted in 100 miles or less during main line service.

The history of steam power has been widely covered on this site and you can read much more about it here.  The first locomotive operated in the United States was the English-built Stourbridge Lion, carrying out its first test over the Delaware & Hudson Canal Company on August 8, 1829, piloted by Horatio Allen.

The first American-built design was Peter Cooper's 2-2-0 "Tom Thumb," which famously lost in a horse race while testing on the fledgling Baltimore & Ohio on August 28, 1830.

As technologies improved and it became widely evident railroads were the future in transportation, thanks to their speed, efficiency, and ability to operate in all types of weather (unlike canals and stagecoach lines) ever larger and more powerful locomotives were designed throughout the 19th century.

The first widely used wheel arrangement (officially known as the “Whyte notation”) was the 4-4-0 "American."

The type offered a larger boiler for increased power, front pilot truck to "steer" into curves, a covered cab for crewmen, and a sizable tender to store coal/wood and water.

While the American was not the first of its kind to feature these improvements it was the first built on such a large scale.  The tender was of particular importance. 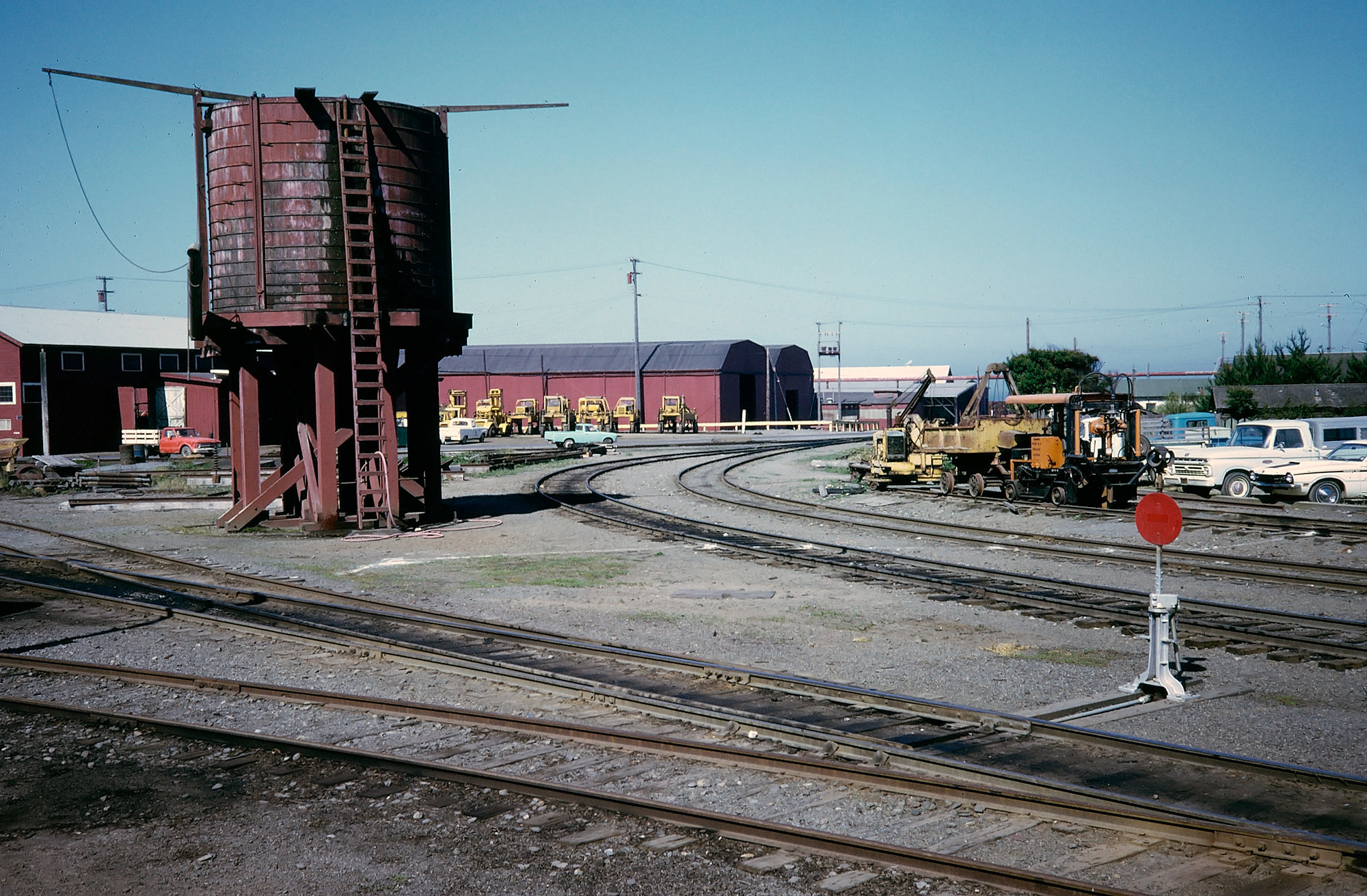 Without one, or any type of water storage device a locomotive's range was limited, usually 10 miles or less since water was consumed at a far higher rate than heating fuel (early on this consisted of coal/wood and then later oil was used).

In addition to producing steam, the ultimate source of a locomotive's power, water was extremely important to the boiler's well-being.

It must remain high enough to cover the firebox or the resulting heat could cause a failure of the entire system and explode.

Despite their romance steam locomotives, and any type of equipment employing a boiler, are dangerous machines.

Water levels must be constantly monitored (in the old days engineers relied on a sight glass in the cab) and the shell must be strong enough to support the required steam pressure.

According to one expert a general rule of thumb pertaining to a steam locomotive's water consumption is as follows (again, these numbers are general as obtaining correct figures is specific for each individual steam locomotive requiring precise equations relating to BTU's per minute divided by the fuel being used [among other calculations, as the locomotive's drawbar horsepower is also needed to achieve correct figures):

During light working conditions, 18,000 pounds of water are available per every ton of coal consumed.

In moderate working conditions, 13,000 pounds of water are available for every ton of coal burned.

Finally, with heavy working conditions, 11,000 pounds of water are available for every ton of coal consumed.

These numbers were derived using post-20th century, modern locomotive designs.  What began as such a simple device became a highly advanced machine by the 1940s.

The tender could greatly extend a locomotive's range and by the late steam era (1930s-1940s) a locomotive used in main line service could run anywhere between 75 to 150 miles before needing to refuel, which typically coincided with a train crew's district/territory.

This distance was also how far most railroads placed maintenance terminals/facilities since steamers needed constant care whether it be lubrication, fuel, sand, or some other requirement.

Of course, liquid H2O was always the most precious commodity; railroads typically placed at least one water tower, plug (similar to a tower but without a storage device and only tall enough to fit over the tender with a discharge chute which pumped water), or "tank pond" (located near the tracks they were fabricated by damming nearby creeks or streams) half-way between terminals as a safety precaution.

In The Modern Era

The water tower became a bucolic object during the romantic era of railroading when trains were the only way to travel and steam locomotives were commonplace.

It could be found in the smallest of towns, awaiting its next tenant, while in some cases stops were placed miles from the nearest home.

In some cases, original examples are still used as they were intended, such as on the Cass Scenic Railroad and Durango & Silverton Narrow-Gauge.