The Westinghouse Automatic Air Brake was one of the most important improvements in railroad safety during the industry's early years.

Developed by George Westinghouse in the 1860s, just after the Civil War, it also offered more efficient operations since brakemen no longer had to engage in the dangerous, tedious task of navigating the catwalks and setting brakes manually.

The automatic system used pressurized air contained within the locomotive and each car to quickly applying braking throughout the train.

As was so often the case during those times railroads were slow to adopt the practice despite its advantages until being forced to do so by the government.  Today, air brakes remain the primary method to stop a train throughout North America. 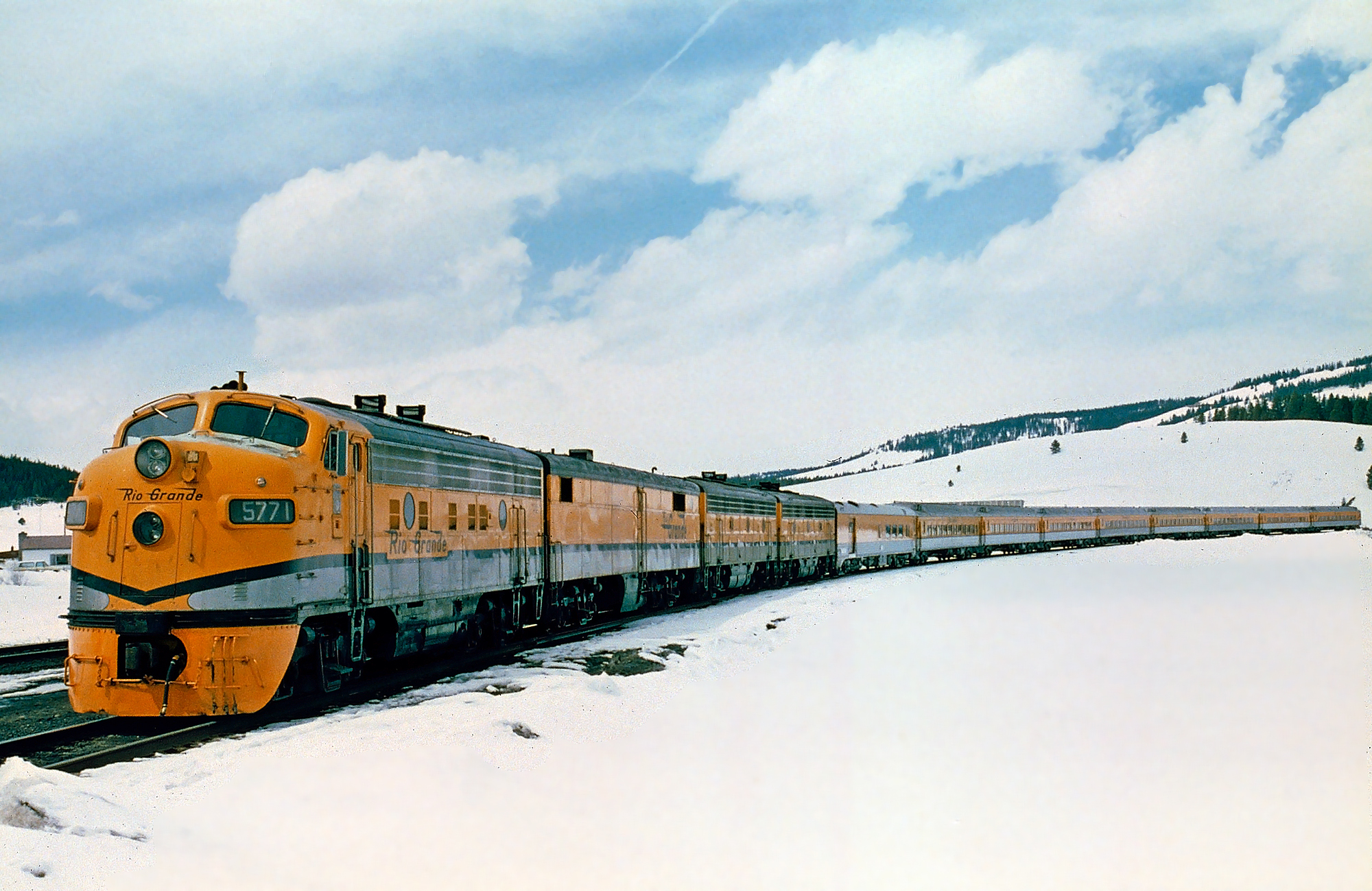 When the railroad began to flourish in a young United States the prospects of this fast new mode of transportation were tantalizing.

According to John Stover's book, The Routledge Historical Atlas Of The American Railroads,  travel time by stagecoach or horseback from New York City to the Ohio River normally required 2 to 3 weeks to cover the 400+ miles.

With railroads this was reduced to single day by the 1860s.  Despite their economic and societal improvements the railroad's its early years were fraught with problems, beginning with safety.

With little government oversight in the early 19th century (many laws and regulatory agencies did not appear until the late 1800s) railroads were free to do as they pleased.  The issue of braking was one such area the industry did not bother addressing.

To stop trains a very rudimentary, inefficient, and dangerous method was employed requiring employees known as brakeman to run atop the cars and set each car's brakes by hand using its brake-wheel.

According Jim Boyd's book, The American Freight Train, the first types of rolling stock to use them were simple gravity cars of the 1830s which employed basic brake shoes that would press against the wheel retarding its movement.

In addition, the first locomotives carried their own rudimentary system, which also sometimes forced a brakeman to climb atop the contraption and apply its brakes.

When stopping a moving train the engineer would signal via the locomotive's whistle and brakemen would climb on each car's roof and manually apply its brake-wheel.

The worker would run from car to car doing until he had set all of the required brakes.  It was a very dangerous occupation that resulted in many injuries and deaths.

As Mr. Boyd notes it was also very time consuming, requiring a few minutes to stop a train going just 15 mph.  In some instances engineers could see their approaching trains but could not stop in time to avoid a collision.

According to the book, Railroads In The Days Of Steam (from the editors of American Heritage), a young Union Army veteran named George Westinghouse hoped to fix this problem, improve safety, and save lives.

He was particularly disturbed by the incident mentioned above which had occurred near Schenectady, New York.  After some time he received a patent for an automatic air brake on April 13, 1869.

His design utilized a triple valve system which included a piston valve, slide valve, and graduating valve.  To increase a train's stopping time Westinghouse equipped each car with its own air reservoir (tank). 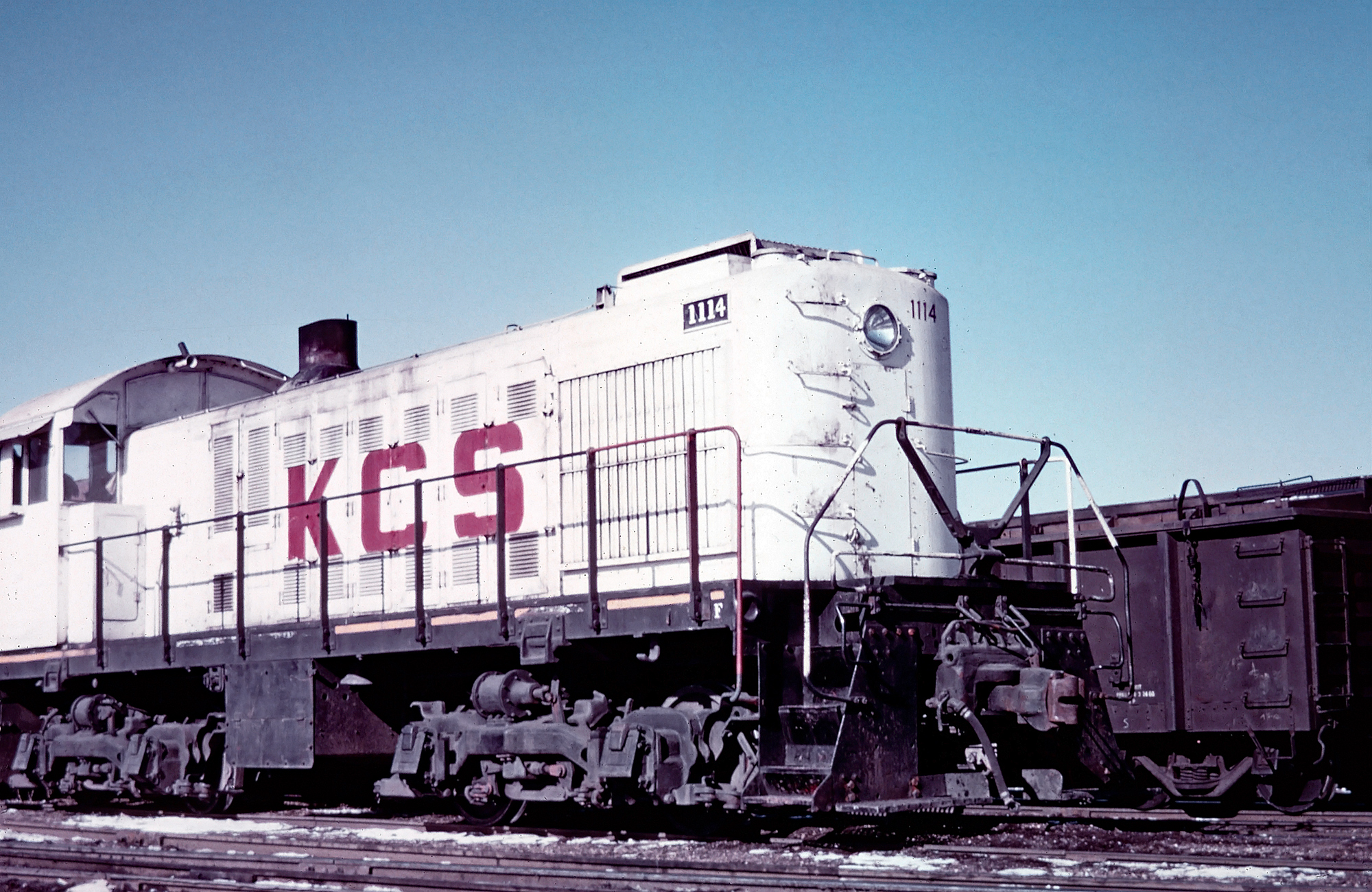 Once activated from the locomotive cab it operated on a fail-safe system; the line, interconnected throughout the train by sealed pipes running underneath each car would release its air at a controlled rate, thus reducing the pressure which then triggered a valve system on each car to feed air into the brake cylinder.

After the engineer released the brake, the valve portal would close and each car's tank refilled with air.

This increase in air pressure subsequently caused each car's valves to work in reverse, allowing the brake cylinders to release their pressure.

During an emergency situation, such as a rapid loss of pressure via a damaged line or the engineer manually "dumping the air," braking is rapidly applied throughout the train.  It was an ingenious system but, not surprisingly, railroads were skeptical. 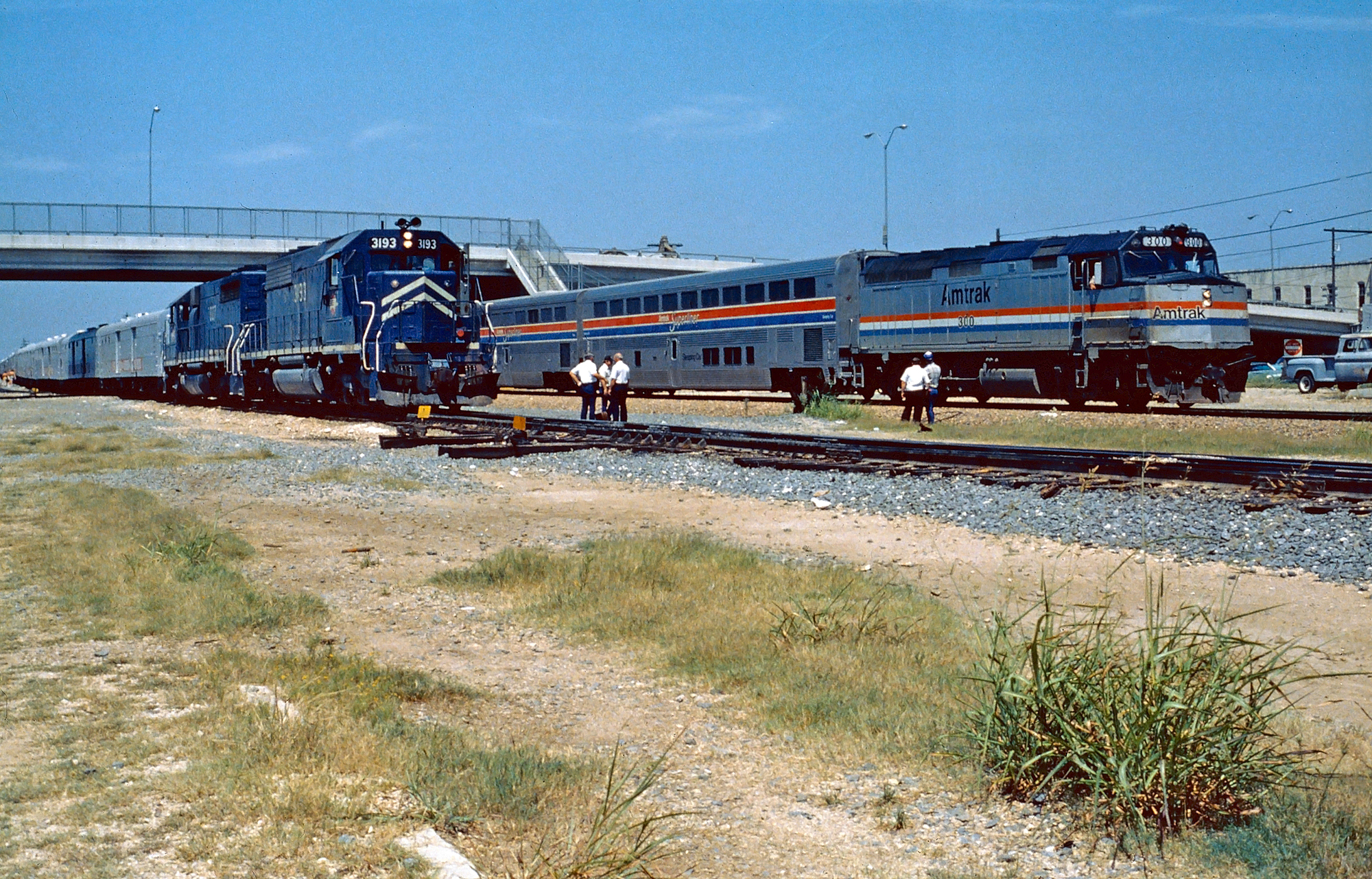 As the Cornelius "Commodore" Vanderbilt told Westinghouse, "Do you pretend to tell me that you could stop trains with air?"

He proved the legendary tycoon wrong (who laid the foundation for what eventually became the mighty New York Central System) during a demonstration run from Pittsburgh, Pennsylvania to Steubenville, Ohio.

During the test he placed an air pump and tank on the lead locomotive and then ran pipes to every trailing car.  Each had its own cylinder and piston connected to a braking system and once activated by the engineer the compressed air quickly applied braking throughout the train.

This initial design did not employ a fail-safe system so if the line was cut or there was a leak the resulting loss of pressure would cause the brakes to fail.

In 1872 Westinghouse improved upon his initial design, which is mentioned above.  Unfortunately, even this demonstration did not fully convince railroads. 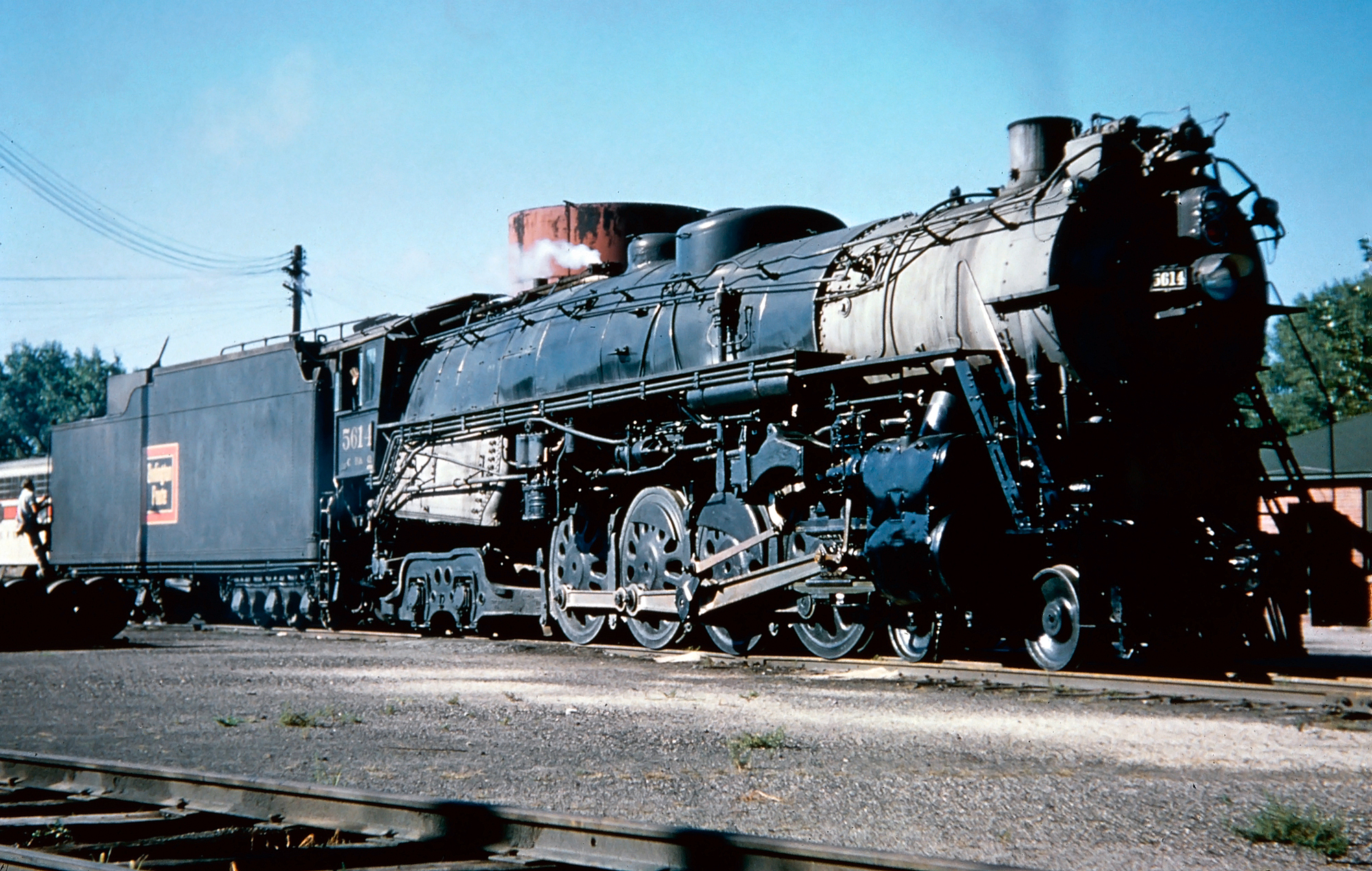 Chicago, Burlington & Quincy 4-8-4 #5614 was photographed here near the end of her career in the summer of 1956. The locomotive was built by Burlington's shop forces in 1937. Following her career she was donated to the city of St. Joseph, Missouri in May, 1962. American-Rails.com collection.

The issue largely came down to money as companies did not want to spend the large sums of capital required to upgrade their equipment with the new device.

During the 1880s the first legislation was enacted when Iowa, led by state railroad commissioner Lorenzo Coffin, passed a measure to have all trains operating within its state equipped with both automatic air brakes and Eli Janney's new knuckle coupler.

Westinghouse went on to establish his Westinghouse Air Brake Company in 1869 and today railroads in the United States continue to use the basic system although many improvements have been made over the years (worldwide other countries have adopted a pneumatic system, such as in Britain and Germany).