Railroads proved vital in World War 2 as they kept millions of men and tons of materiel flowing.  Without their unwavering service, victory would have never been possible.

It was a stark contrast from World War I where railroads' inability to coordinate and keep traffic moving resulted in a nationalized industry led by the United States Railroad Administration (USRA).

While this organization was highly criticized for its handling of the nation's rail infrastructure it did set forth many standardized practices which greatly aided the private industry, particularly during the Second World War.

The diesel locomotive's development, spearheaded by Electro-Motive's FT of 1939, was also a major boon.  However, only some railroads were able to acquire this new form of motive power before wartime restrictions precluded further construction. 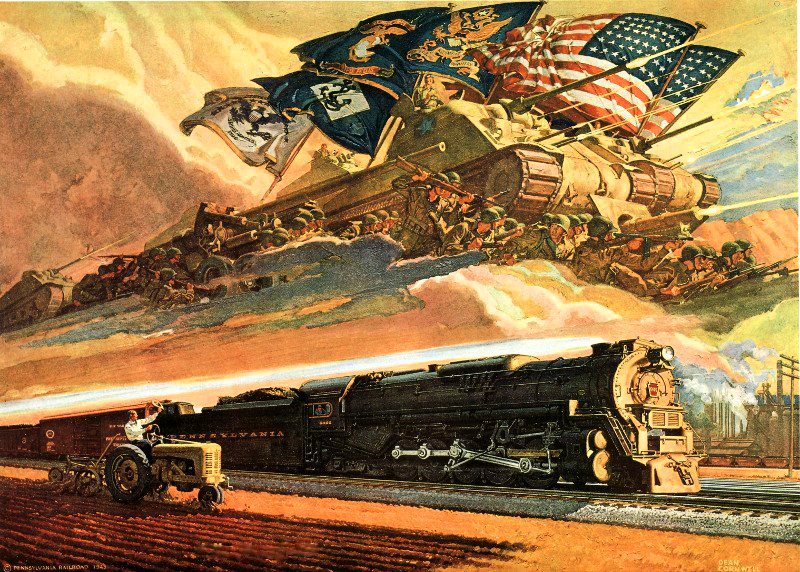 "Forward." A painting by Dean Cornwell featured in the Pennsylvania Railroad's 1944 annual calendar.

Germany's blitzkrieg was a new military tactic that caught many by surprise, particularly France which officially surrendered on June 22, 1940.

On July 10th the Battle for Britain began, the last free European country.  Buffered by the English Channel and an unwillingness to give up, the Brits fought valiantly for their homeland.

Realizing the severity of the situation but not willing to officially enter the war President Franklin D. Roosevelt and Congress authorized shipments of food, materiel, and other supplies to their beleaguered allies in September.

While railroads witnessed a slight increase in freight tonnage (revenue ton-miles increased from 333.44 million in 1939 to 373.25 million a year later), it was not until Japan's surprise attack on Pearl Harbor and the United States formal entry into the war, did this increase astronomically.

While it took some time for America's industrial machine to come online, by 1942 the United States was fully engaged, producing everything from tanks and planes to ammunition and mortars.

Transporting this desperately materiel would have not been possible without the railroads.  In 1941 revenue ton-miles increased to 475 million and then jumped to 637.99 million in 1942.  That year, Railway Age published a piece entitled "What We Fight For."

It predominately discussed the American resolve, freedom, and our way of life.  In addition, it alluded to railroading's importance:

"Our railroads are one of our finest examples of free private enterprise.  What they have achieved for the nation during the last two years, and are still achieving, in efficiency and economy, never has been, never could be, equaled in piece or war by any dictatorial government bureaucracy.

For it is the result of thousands of widely-scattered free men exercising their full initiative and energy in free cooperation - which government bureaucracy, by its nature, prevents."

Also, Lowell Jackson Thomas, a well known writer, actor, and broadcaster mentioned the industry's tremendous performance in a piece he wrote on May 12, 1942:

"I've seen a locomotive over 130 feet long, speeding war material over mountain grades.  I've watched troops unloading from train after train, powered by fast Diesel or Streamliners, some with 7,000 horsepower, the heaviest and most powerful ever made.

And, I never witnessed a speed-up so swift, or so well directed, as men and women of America's railroads swarmed to their tasks of building even more powerful locomotives, laying more tracks, and organizing incredibly complex shipping schedules.

We Americans needed a miracle in railroad transportation during early 1942, we expected that miracle, and, by George, we got that miracle!"

In over 135 pages he provides an in-depth look at just how vital they were to the war effort through numerous statistics, detailed text, and historic photos/advertisements. 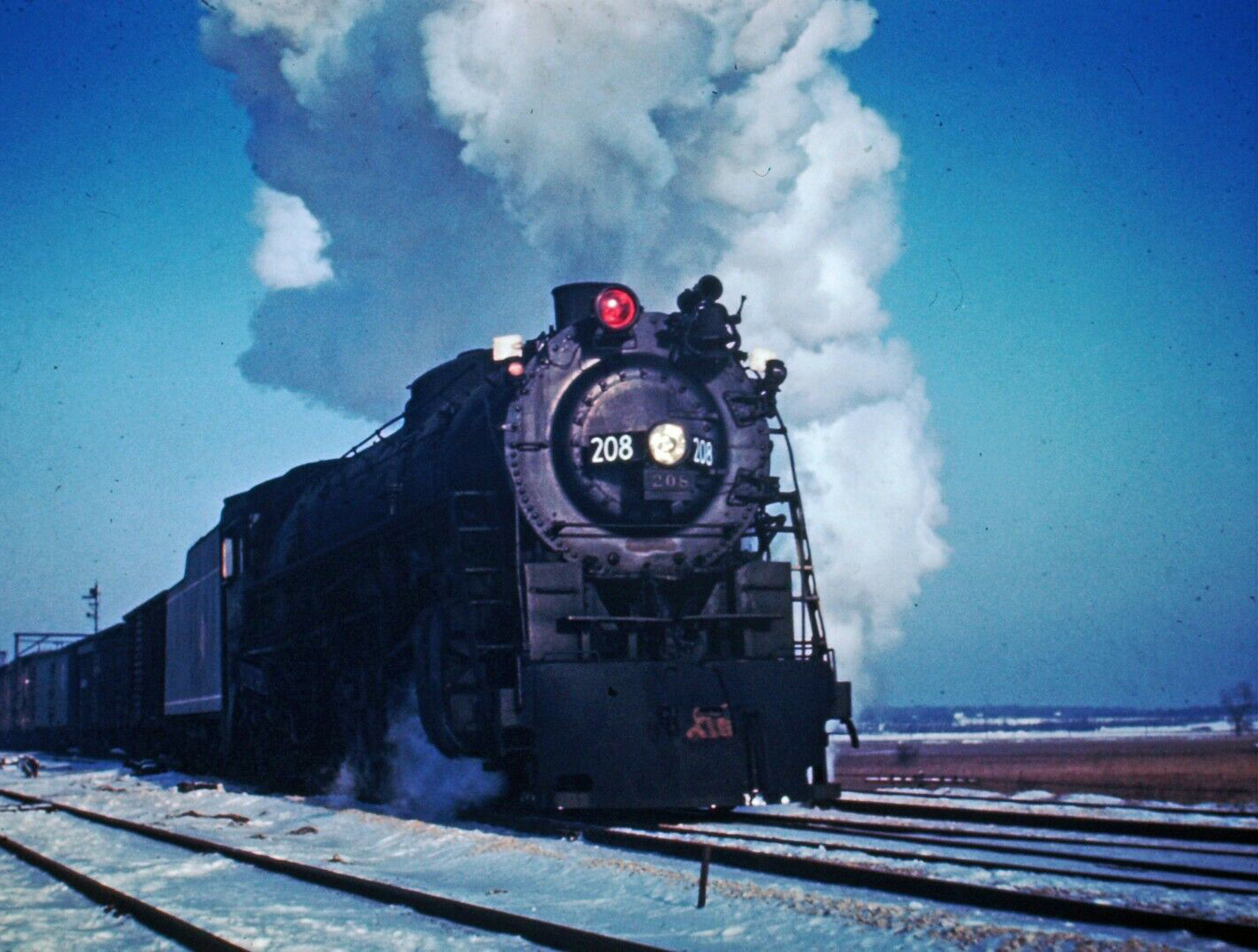 Milwaukee Road 4-8-4 #208 (S-2) is working freight service as the big Northern steams northbound at Techny, Illinois on a December evening in 1946.

His work is a must read if you have any interest in this subject. Mr. DeNevi notes when America entered the war the industry boasted more than 41,000 locomotives and 2 million freight cars.

In addition, the nation's rail network had dropped to under 230,000.  These figures were astonishing for what they didn't contain; roughly 50% less locomotives, 33% fewer cars, and some 25,000 fewer miles.

As historian John Stover notes in his book, "The Routledge Historical Atlas Of The American Railroads," railroads did not want a repeat of World War I.

They were quite eager to cooperate with the government and avoid federal control. (This did occur briefly when labor disputes led to a two-month takeover between December, 1943 and January, 1944.)

Railroads were also aided by improved technology, such as heavier freight cars, the new diesel-electric locomotive, and Centralized Traffic Control.

Otherwise known as CTC this contemporary signaling system gave dispatchers complete control over a section of track (known as a block) from a centralized location.

Its efficiency enabled single track territory to achieve 75% capacity of a fully double-tracked corridor.  CTC was originally implemented in 1927 but with government assistance, hundreds of additional miles were upgraded over the next few decades.

Railroads enjoyed a renaissance during World War II, reigniting its former dominance which had lasted through the 1920s. What's more, the industry's overall operating ratio declined to a record low of 67.5% while profits were so strong railroads repaid $2 billion in debt.

As diesels witnessed their main line debut at this time the 1940's also signaled the technological zenith of piston-driven steam locomotives.

Unable to purchase diesels due to wartime restrictions, Super Power designs and large articulateds like the 4-6-6-4 and Union Pacific's 4-8-8-4 "Big Boy" were common sights. 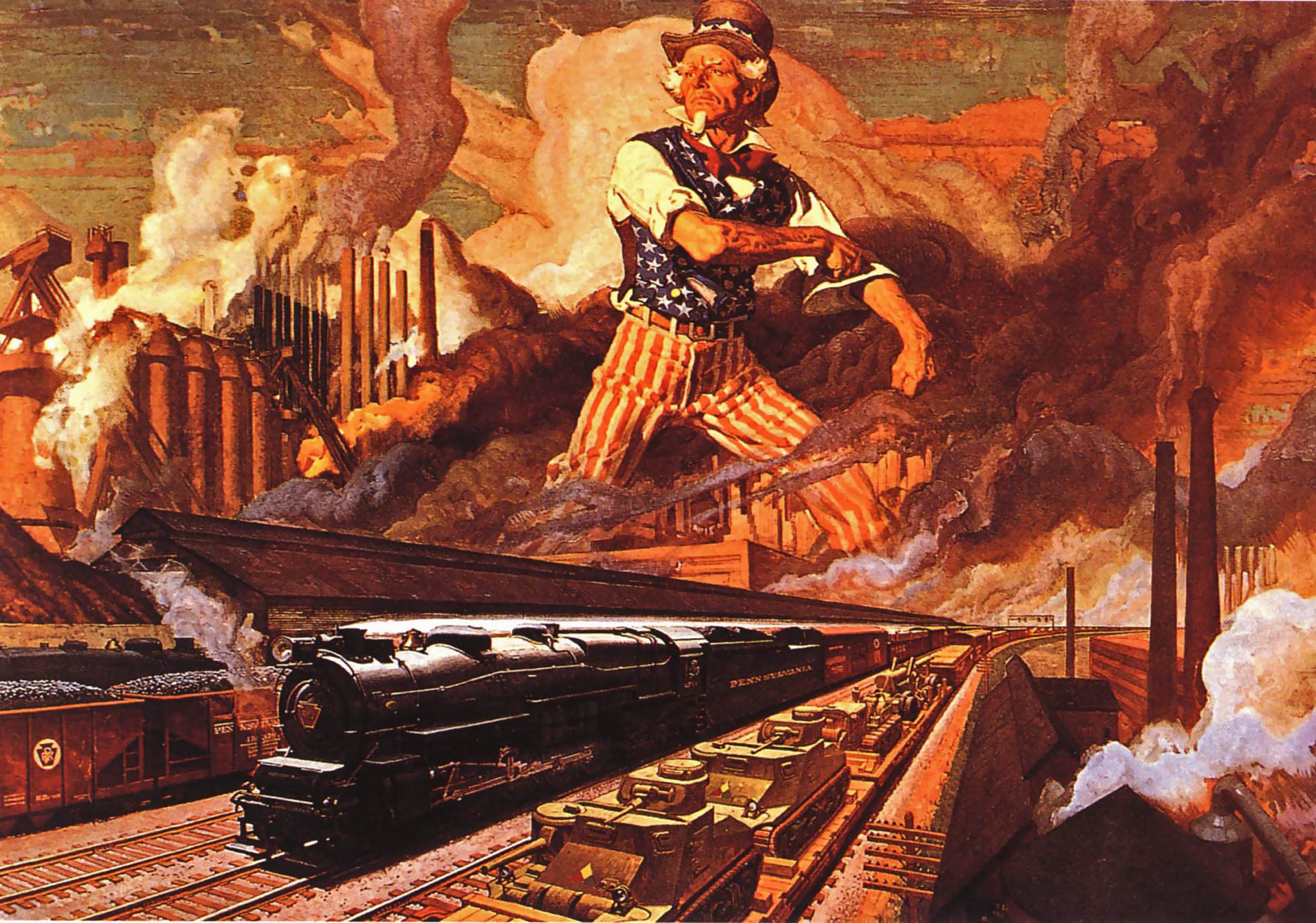 "Serving The Nation." A painting by Dean Cornwell featured in the Pennsylvania Railroad's 1943 annual calendar.

The Baltimore & Ohio, for instance, purchased its newest and last steam locomotives in the early 1940s.  Designated the EM-1 Class it was a 2-8-8-4 wheel arrangement, first put into service on the Northern Pacific in 1928.

It carried a low boiler pressure which enabled a high factor of adhesion, enabling the locomotives to pull a considerable amount of freight (particularly over the West End's torturous grades, the fabled West End/Cumberland Division).

The EM-1's did a marvelous job at their assigned tasks, having little trouble hauling merchandise or coal drags over the steep climbs of Cranberry Grade, along the West Virginia/Maryland border, or Sand Patch in Pennsylvania. It wasn't just the B&O.

As David Jones points out in his article, "The Joy And Thunder Days: On The Hectic Home Front, America's Railroads Saw Their Finest Hour As They Hauled A Nation To War" from the June, 1994 issue of Trains Magazine, the Pennsylvania Railroad manufactured several home-built J-class 2-10-4's and the Western Pacific 4-8-4's modeled after Southern Pacific's successful line of Class GS-6's. 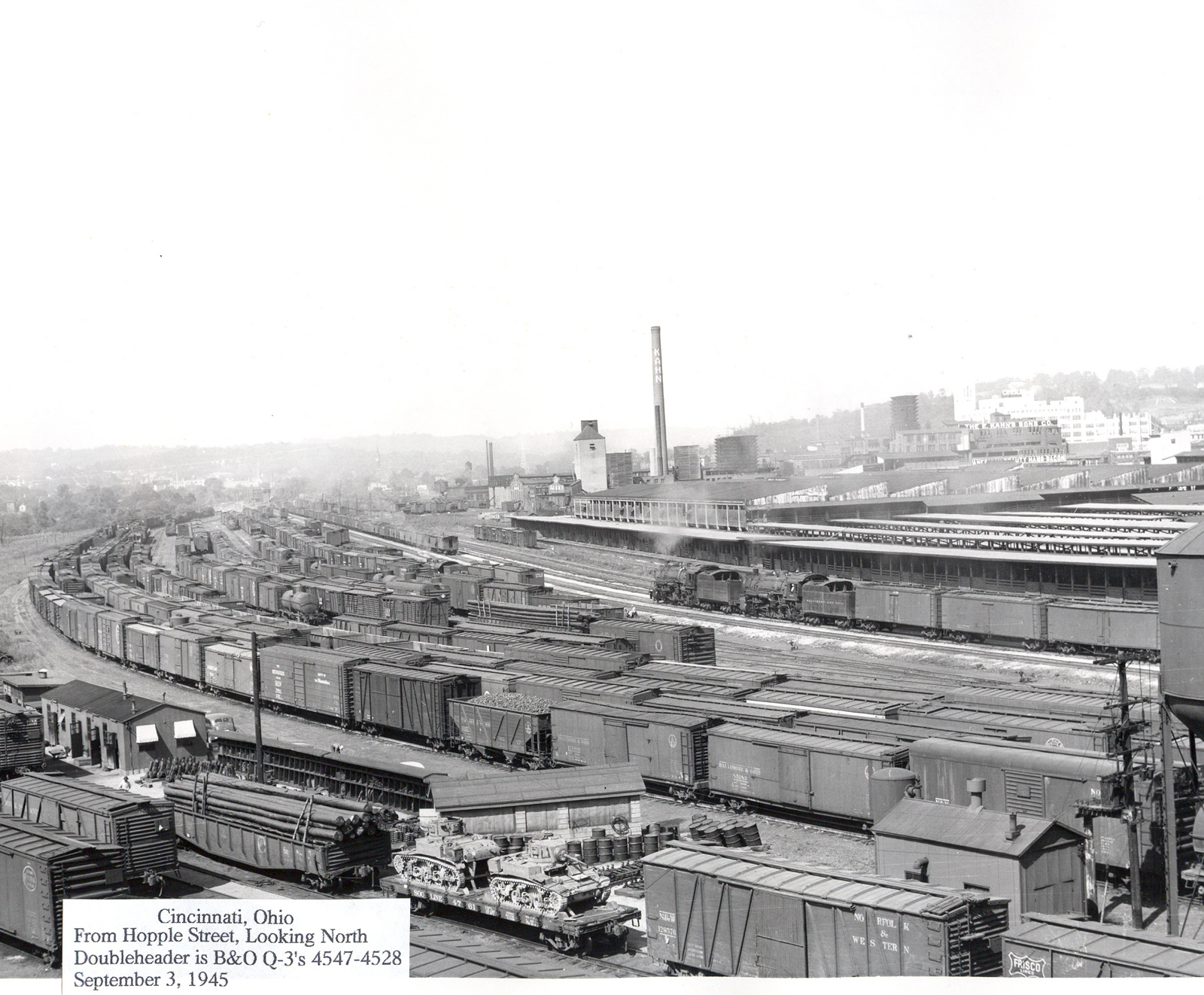 Baltimore & Ohio's busy yard in Cincinnati, Ohio can be seen here on September 3, 1945. Note the 2-8-2's (Q-3) double-heading reefers in the distance and the tanks on flatcars in the foreground. Author's collection.

Railroading's importance was not confined solely to the movement of goods, military supplies, and troops.

The general public also found their way back onto the rails.  While the Interstate Highway system was still decades away, even by 1941 most Americans were utilizing the automobile.

As Mr. Jones further points out, at that time fully 89% of the public traveled intercity by car or bus with just 9% doing so by train.

However, by 1944 these numbers had changed drastically to 63% and 34% respectively.  In addition, railroads handled no less than 64% of all intercity freight throughout the war, peaking at 72% in 1943.

Railroad executives realized in the postwar era such strong numbers were unlikely to continue.  Nevertheless they remained hopeful that steps could be taken to lessen the impact.  Unfortunately, nothing proved successful, made worse by a government that had abandoned trains for highways. 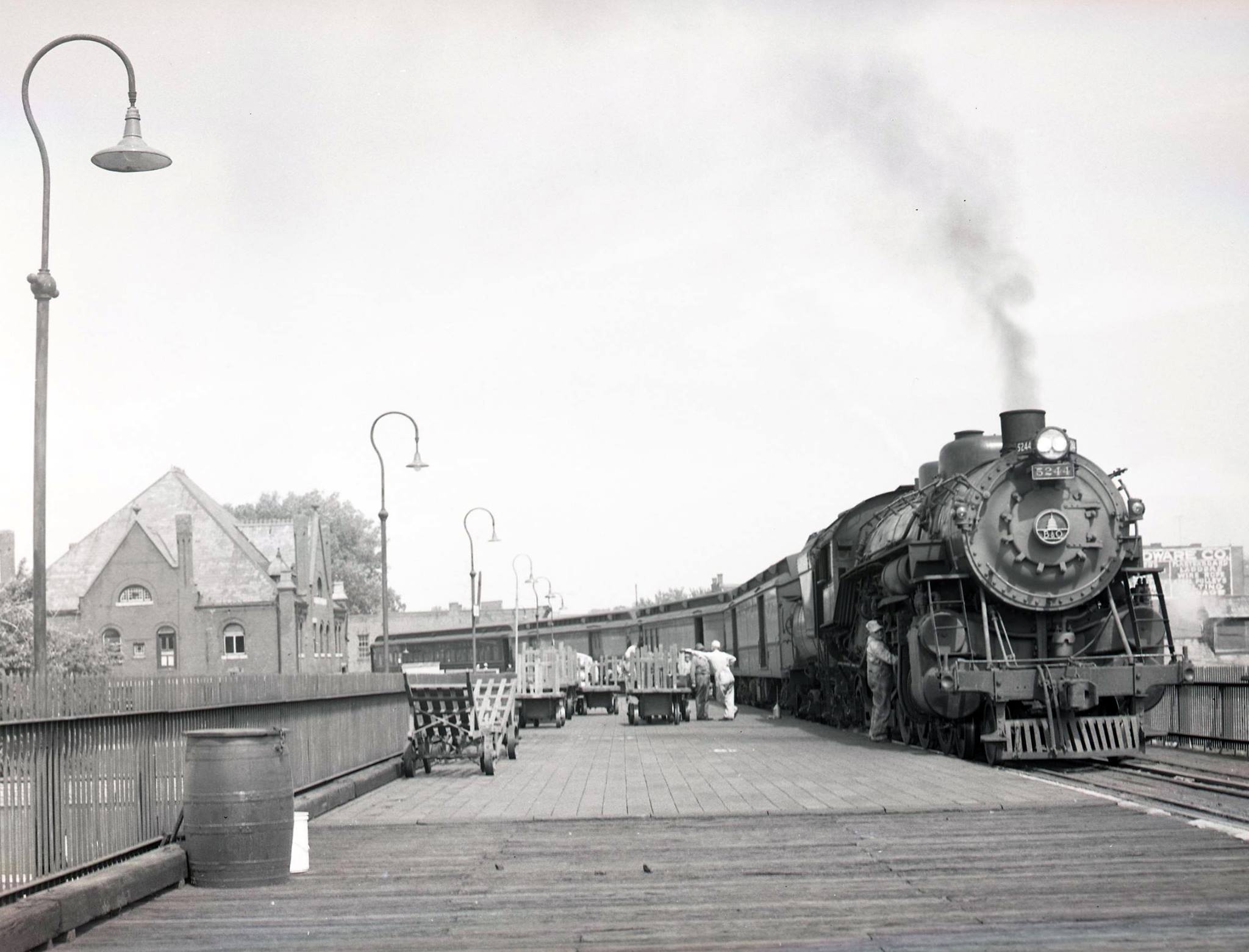 Baltimore & Ohio 4-6-2 #5244 (P-6a) boards passengers at Ann Street Station in Parkersburg, West Virginia along the Ohio River Branch, circa 1940s/early 1950s. Today, the building is gone although the line remains in active use under CSX. John W. Barriger III photo.

Railroads did slow their pace of christening new streamliners during the war (in one particularly unfortunate instance the New York Central unveiled its Empire State Express, a service linking Buffalo and New York, on the morning of December 7, 1941).

Afterwards, however, many new names appeared such as Milwaukee Road's Olympian Hiawatha, Baltimore & Ohio's Cincinnatian, and the legendary California Zephyr.

The Central rebounded well during World War II and felt so good about its prospects it ordered 420 new lightweight, streamlined cars in 1945.

This was in addition to 300 cars it had already ordered a year prior.  Mr. Schafer and Mr. Solomon point out in their book, "New York Central Railroad," the combined purchase (720 cars) was the largest single order, ever, for an American railroad.  The Pennsylvania Railroad spent a similar amount only to see its efforts prove futile.

During the 1950s the industry watched helplessly as passenger traffic plummeted and not even new equipment and promotional advertising could sway the public.  The 1950s also saw a slow decline in freight traffic due to a national recession in 1957 and the new interstate highway system.