The narrow-gauge White Pass & Yukon Route Railroad, located in Alaska, is the busiest tourist railroad in the country, even more popular than the legendary Strasburg Railroad, due to the line’s spectacular scenery and limitless supply of tourists aboard cruise ships that dock at Skagway.

While the WP&YR today is a very successful tourist railroad its heritage lies as a freight hauler, once serving several ore mines located between Skagway, Alaska and the Yukon Territory of Canada.

This is another unique feature of the railroad as its lines are split with half operated in the United States and the other half in Canada.

While the Alaska Railroad offers some spectacular scenery of its own few train rides anywhere in the world offer such stunning scenery as the WP&YR. 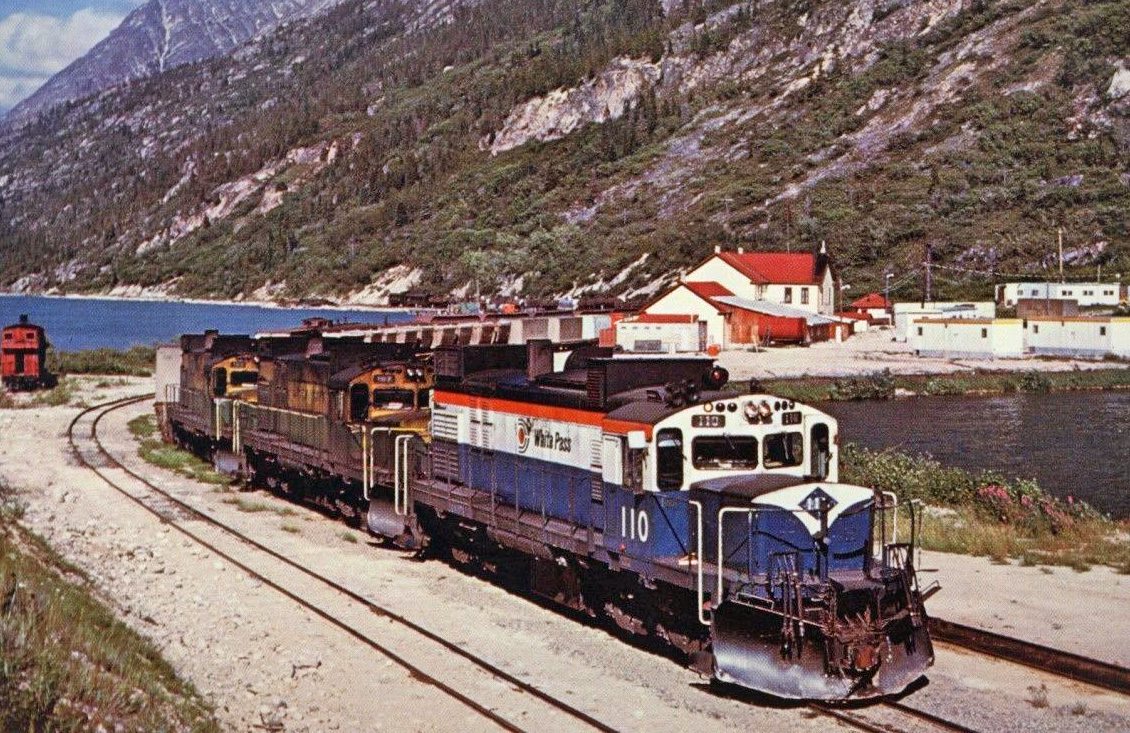 White Pass & Yukon RSD39's pause at Bennett, British Columbia with their mixed train while awaiting a crew change to finish its southbound run from Whitehorse to Skagway. Robert Turner photo.

The White Pass and Yukon Route Railroad dates back to 1898 and the Klondike Gold Rush.

Needing a better means of moving men and material through the extremely rugged regions of northern Alaska, British Columbia, and the Yukon Territory (via the White and Chilkoot Passes), a railroad was chartered (the White Pass & Yukon Railway Company) and construction began later in 1898.

By July 29, 1900 the WP&Y had built a 110-mile line between the Alaska port of Skagway to Whitehorse, Yukon Territory (with the important town of Carcross located about half-way along the line). 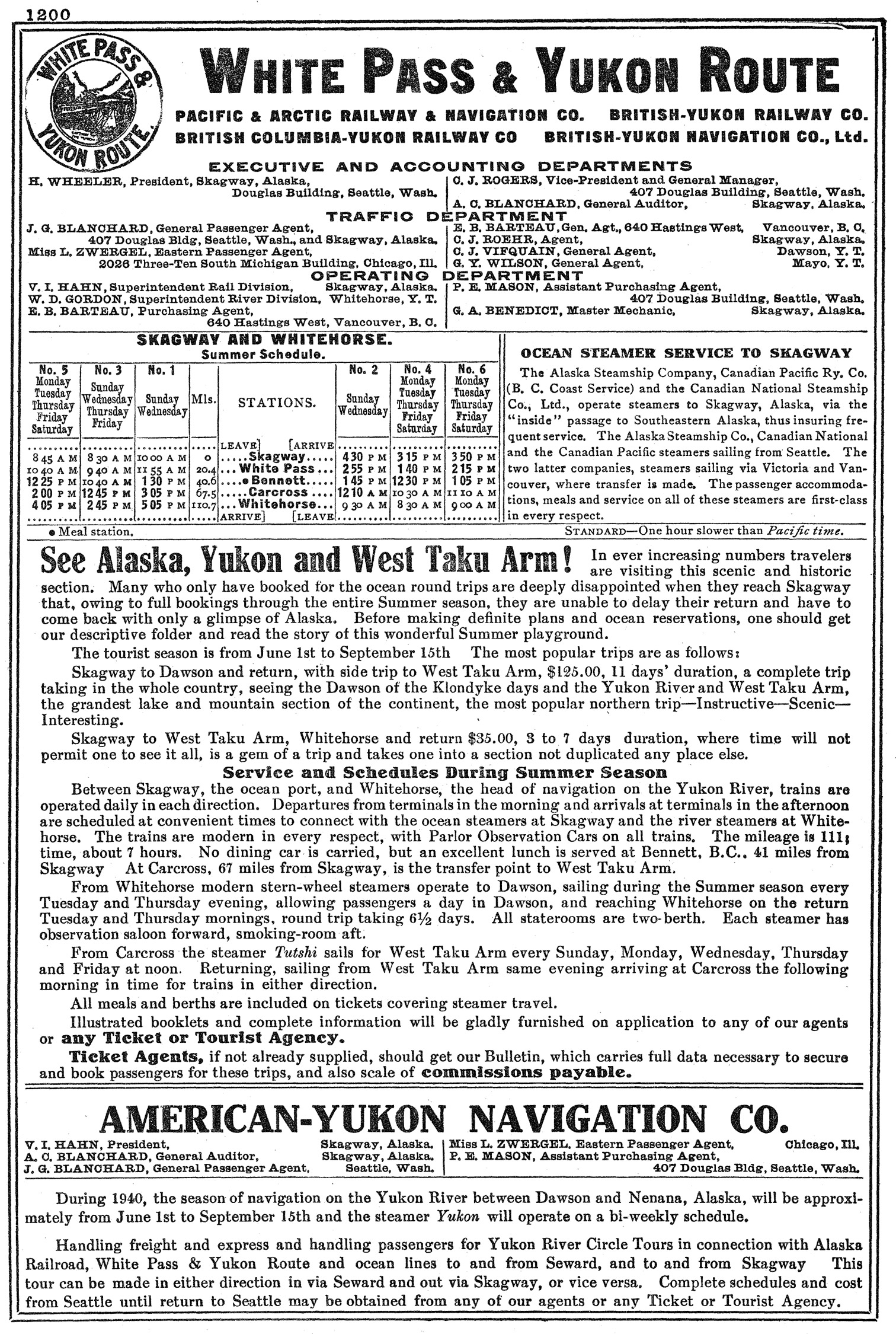 Skagway was ultimately chosen as the southern terminus of the line due to its port, which allowed for an easier transportation of men and material in and out of the area.

As the first railroad constructed in Alaska, the WP&YR did help to open new routes of transportation even if it did not serve the state's largest cities (such a railroad would arrive soon, however, in what is now known as the Alaska Railroad).

The initial purpose of building the White Pass & Yukon was for the Klondike Gold Rush as thousands of prospectors flocked to the Yukon hoping to strike it rich.

However, before the railroad even officially opened the rush was over by 1899 after news of new deposits were discovered near Nome. 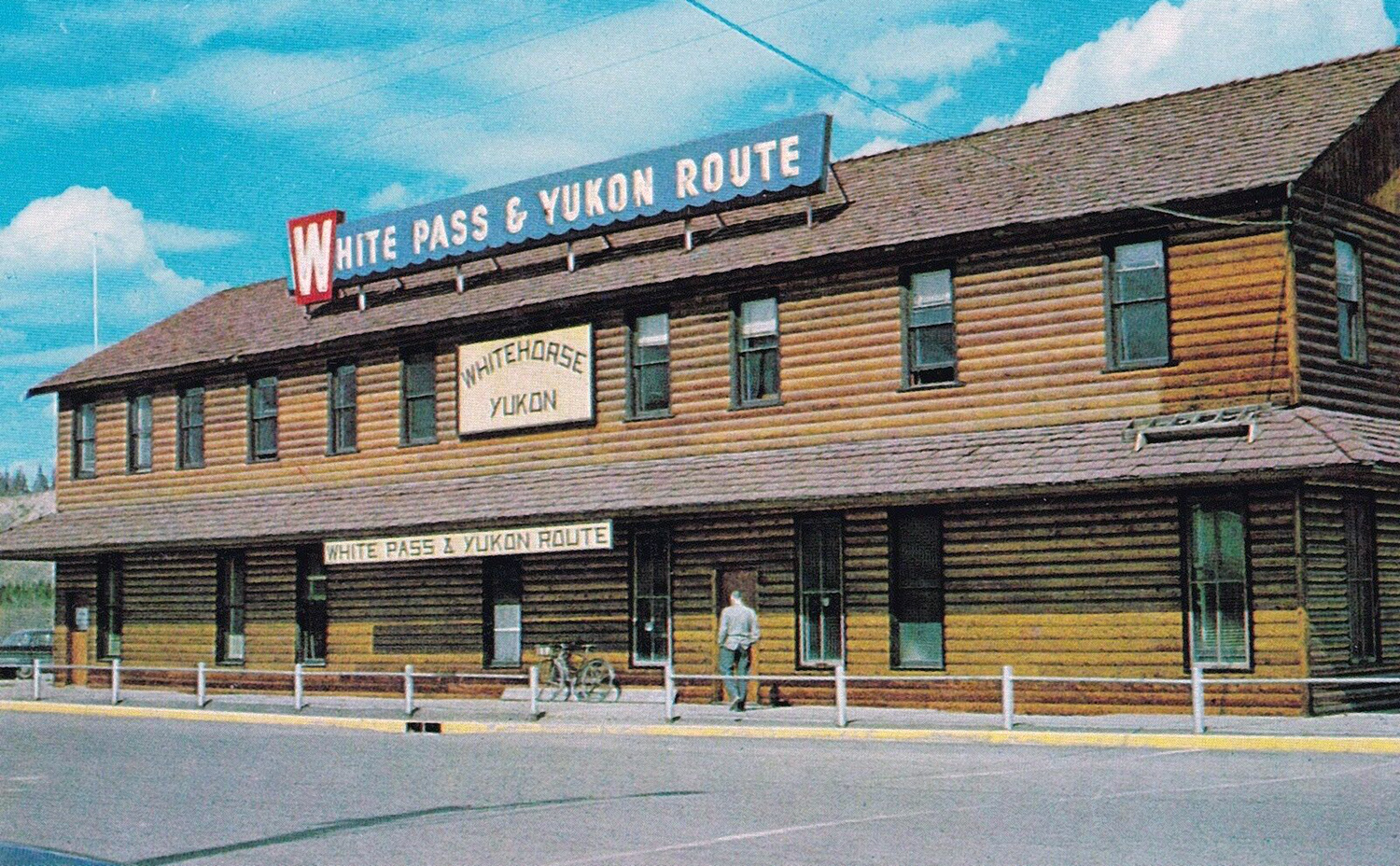 Despite this setback the WP&YR found other ways to remain profitable, namely via the movement of minerals and ores from the region as mines sprang up to harvest rich seems of copper, silver, and other metals.

In general, this type of traffic sustained the railroad throughout the rest of its days as a freight carrier although it did see a brief spike in traffic during the building of the Alaska Highway and during World War I and II.

The White Pass and Yukon Route Railroad is today, one of two operating railroads in Alaska (the other being the famous Alaska Railroad), although it is purely for tourism after freight service ended in 1982 after the final mine in the region closed that year, which then forced the railroad to cease operations.

It reopened in 1988 as a 40-mile tourist line and has grown by leaps and bounds since then.

Today it is the nation’s busiest tourist railroad, seeing over 400,000 riders annually, thanks in part to the thousands of yearly passengers it receives from cruise ships that literally dock right next to the rails. 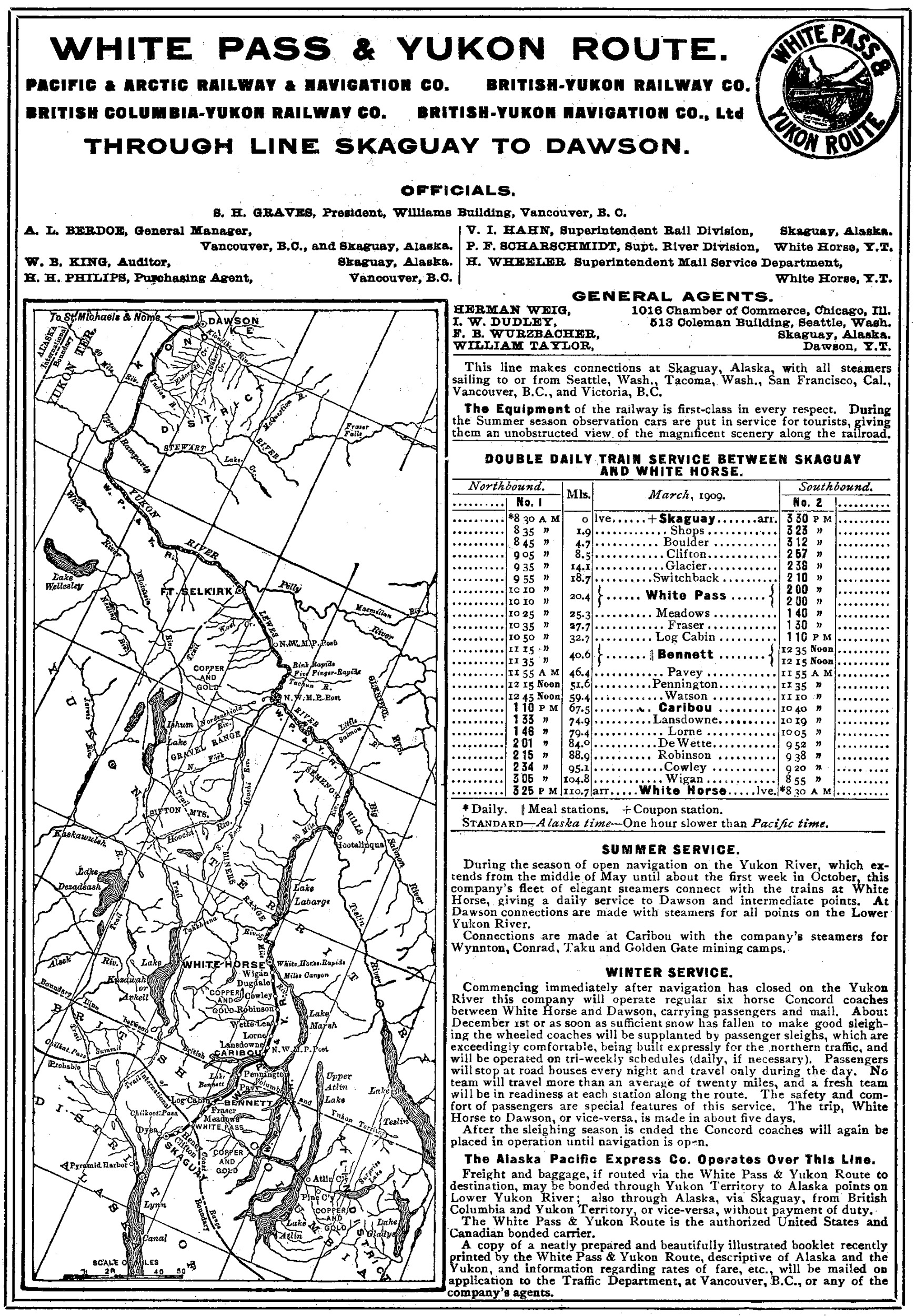 Aside from the tremendous scenery afforded during trips, another draw of the WP&YR is that it uses eleven unique shovelnose diesels, built by General Electric between 1954 and 1966 and the railroad also operates two Baldwin steamers, a Mikado 2-8-2, and a 2-8-0 type.

The railroad has grown so much over the last twenty years that in 2007 it reopened 27 more miles of the original line, north to Carcross in the Yukon.

For many years the railroad has hoped to  reopen the entire line all of the way to Whitehorse, Yukon Territory. In doing so, the chance of reviving freight service is also in play.

In July, 2018 the railroad was sold to Klondike Holdings and Carnival Corporation who have stated they plan to do this very thing. 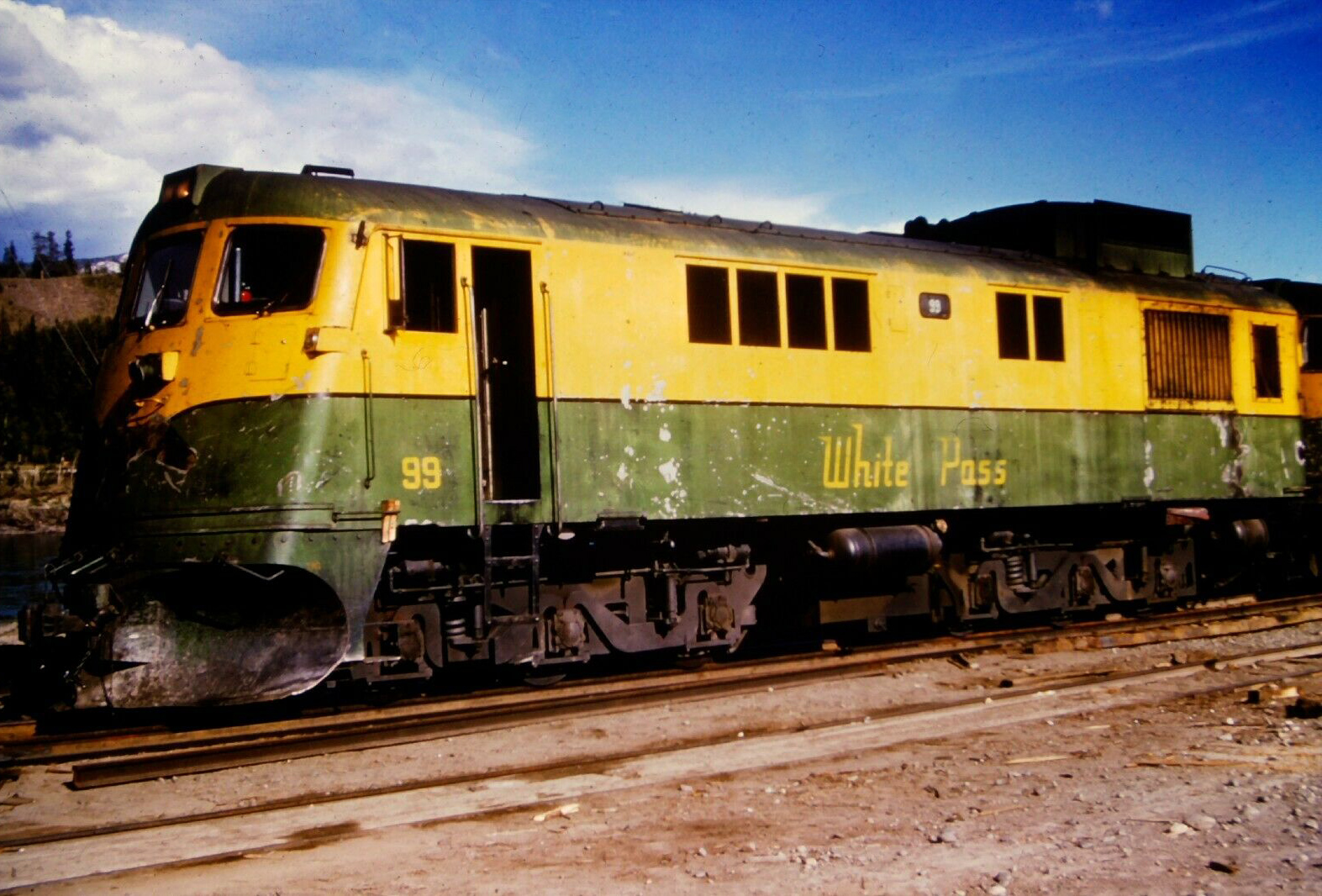 During her days in freight service, 90-Class "Shovelnose" #99 was not as well maintained. She is seen here at the end of the line in Whitehorse, Yukon Territory on July 4, 1973.

Today, the WP&YR hosts several different excursions for passengers using both steam, as well as diesel locomotives all of which are original to the railroad.

Its operational steam locomotives include 2-8-0 #69 and 2-8-2 #73 as well as 2-6-0 #52, which is currently under restoration (interestingly, several former WP&YR steamers are buried in the Skagway River).

Additionally, it still retains nearly all of its original diesel fleet although they have plans to sell three of their MLW DL535Es.

There you find out more about all of their current services, when the trains run, how to reach the railroad, and much more.