Rail service across New England and into southeastern Quebec, Nova Scotia, and New Brunswick has not received much attention from literary sources.

However, carriers like the Boston & Maine, Maine Central, Central Vermont, and Bangor & Aroostook regularly worked with Canadian lines like the Canadian Pacific and Canadian National to provide through service within this region.

The Ambassador and New Englander were named trains serving Boston and Montreal, Quebec (the former a dayliner, the latter running overnight) operated by the Boston & Maine, Central Vermont, and Canadian National.  In a long ago era northern New England boasted a long list of trains served by multiple railroads and/or international destinations such as Montreal and Halifax.

This particular duo was first launched in the 1920s and always carried a heavyweight consist although in later years also field some streamlined cars.  As did most of its counterparts, the Ambassador/New Englander died a slow death over the years as trains fell out of favor, replaced by automobiles and airliners.  What was left of both services (the Ambassador) made its final run during the late 1960s. 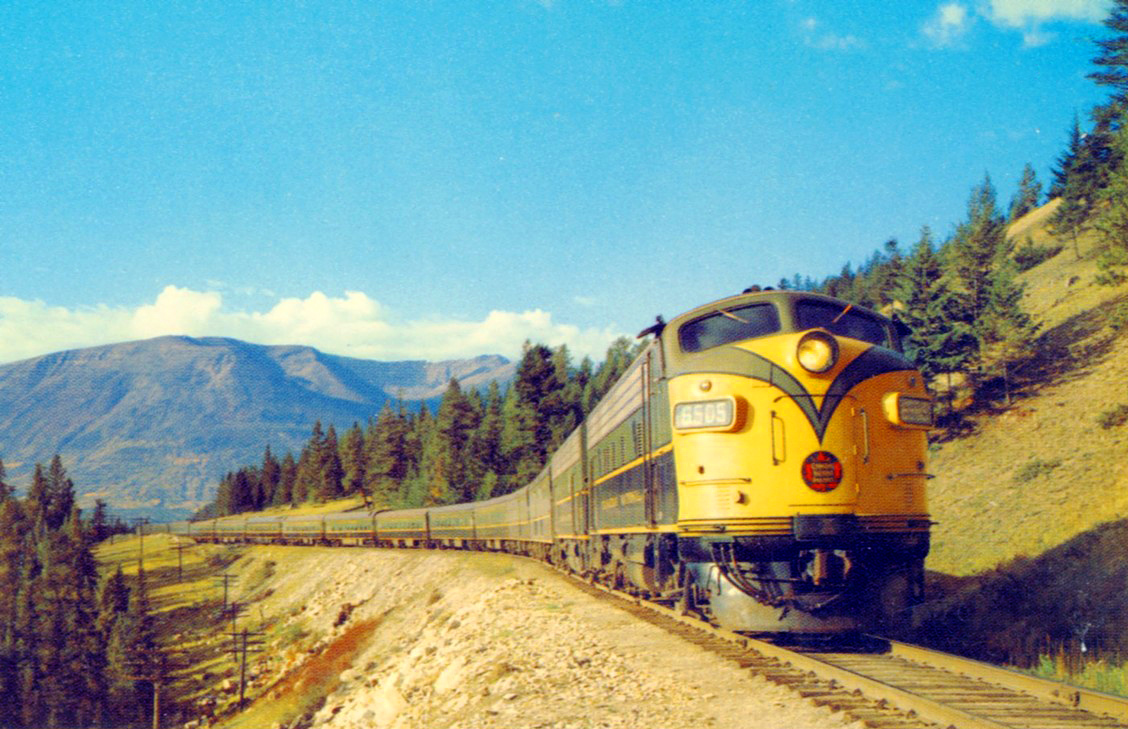 The Ambassador/New Englander spanned a corridor of just over 300 miles between Boston's North Station and Montreal's Central Station on a schedule that covered about nine hours.

According to Kevin Holland's book, "Passenger Trains Of Northern New England, In The Streamline Era," the daytime running Ambassador was to have been named the New England States Limited but this idea was ultimately scrapped.  Additionally, the New Englander replaced the earlier named Bostonian on its overnight run, catering to those on business.

Both new trains departed for the first time on April 26, 1926 as heavyweight, all-steam powered affairs.  During the CV leg of the trip it was quite common to see handsome Class U-1 4-8-2s leading both (these were later replaced by GP9s equipped for passenger service wearing the CN's gorgeous early livery of olive green and yellow).

Before the days of airlines these trains, and their counterparts the Montrealer/Washingtonian, provided one of the quickest means of travel between Montreal and the Northeast (there were other competing services such as the Canadian Pacific's Red Wing/Alouette and Rutland's Mount Royal/Green Mountain Flyer).

According to Mr. Holland's book the heavyweight Ambassador ran with a  diner, parlor, standard coaches, and a 25-seat, parlor-observation from Pullman.  The New Englander, for its part, normally ran with sleepers and coaches according to the B&M's September, 1941 timetable.

By the 1930s the Ambassador fielded its first lightweight cars from the B&M's "American Flyer" series.  These were early streamlined coaches were acquired between 1935-1937 from Pullman, built to specifications originally created by industrial designer Walter Teague.

The B&M would end up rostering thirty examples of these cars for intercity service, which featured large windows, beveled roofs, and riveted Man-Ten/Cor-Ten steel providing for a sleek appearance that was radically different from the traditional heavyweight look of classic clerestory roofs and welded construction.

In conjunction with the B&M's Flyers, CN-owned semi-streamlined coaches also began running on the Ambassador around the same time.

Without question the routing of both trains was nothing short of breathtaking as passengers could enjoy all of the best New England scenery had to offer with rolling hills and bucolic, immaculately maintained farms passing them by while skirting the Connecticut, White, and Winooski Rivers much of the way (Lake Champlain was also within view north of Burlington).

As patronage began slipping after World War II the Boston & Maine combined the Ambassador and CP's rival Alouette south of White River Junction by the mid-1950s creating one, large train.

By this time diesels were in full control and the CV opted for GP9s, as previously mentioned, while the B&M chose the interesting and rare Electro-Motive F2 model (of which the road owned 21 A and B examples, combined) as normal power for the train.

Sadly, this was the dying era of passenger service within New England but especially over the Boston & Maine.  New management under Patrick McGinnis began implementing significant cost-cutting measures, reducing on-board amenities and accommodations through either outright removing them or introducing the utilitarian Rail Diesel Car (RDC).

While RDCs never appeared on the Ambassador it operated as little more than a coach-only consist after losing its café-grill during January of 1958.  After 1960 the only remaining intercity, traditionally-equipped trains on the B&M were the Ambassador and joint Montrealer/Washingtonian.

Both trains said their final goodbyes during the course of the September 3rd and 4th weekend of 1966 with the former making its final run that Saturday traveling northbound to Montreal.