The Boston & Albany's heritage can be traced back to 1831 although is best remembered as one of the most important components of the modern New York Central by offering a direct link into Boston, Massachusetts.

This was a market rival Pennsylvania Railroad never enjoyed, the only major city the PRR did not serve in the Northeast/New England region.

During the Vanderbilt era the two roads were closely aligned via a joint traffic agreement although the NYC never gained formal control until 1900.

Throughout the New York Central years, the Boston & Albany was a vital asset offering a New England-Midwestern gateway between Boston, Buffalo, Detroit, and Chicago via southern Ontario.

If one was traveling between these cities there was no faster way than the Central/B&A. Today, its main line remains an important component of the modern CSX Transportation's network. 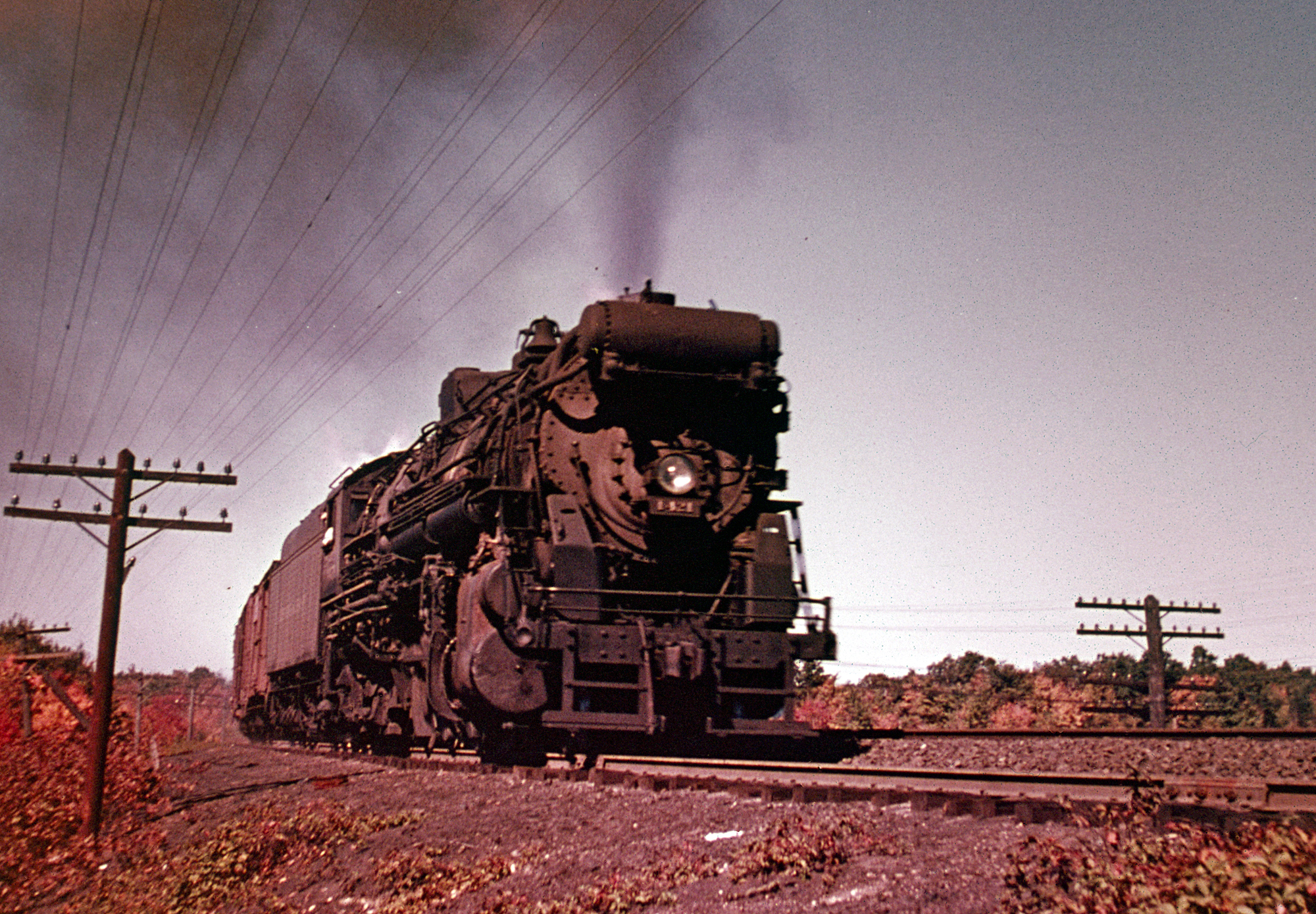 During the 1820s and 1830s, port cities along the eastern seaboard were jockeying for economic dominance as new forms of transportation swept the nation; at first it was the canal, followed soon afterwards by the railroad.

In 1825 the Erie Canal opened between Albany and Buffalo, thus providing New York City with a fast and efficient artery across the state's interior via the Hudson River.

This engineering marvel sent other cities scrambling to catch up; notably Philadelphia, Boston, Baltimore, and Charleston.  For Boston, city leaders immediately set out to establish an all-rail route across the state and open a western connection at Albany, New York.

Such an endeavor included one major obstacle; the rugged Berkshire Mountains in the state's western interior.  The first railroad established to carry out this plan, and immediate predecessor of the Boston & Albany, was the Boston & Worcester Railroad (B&W) chartered June 23, 1831. 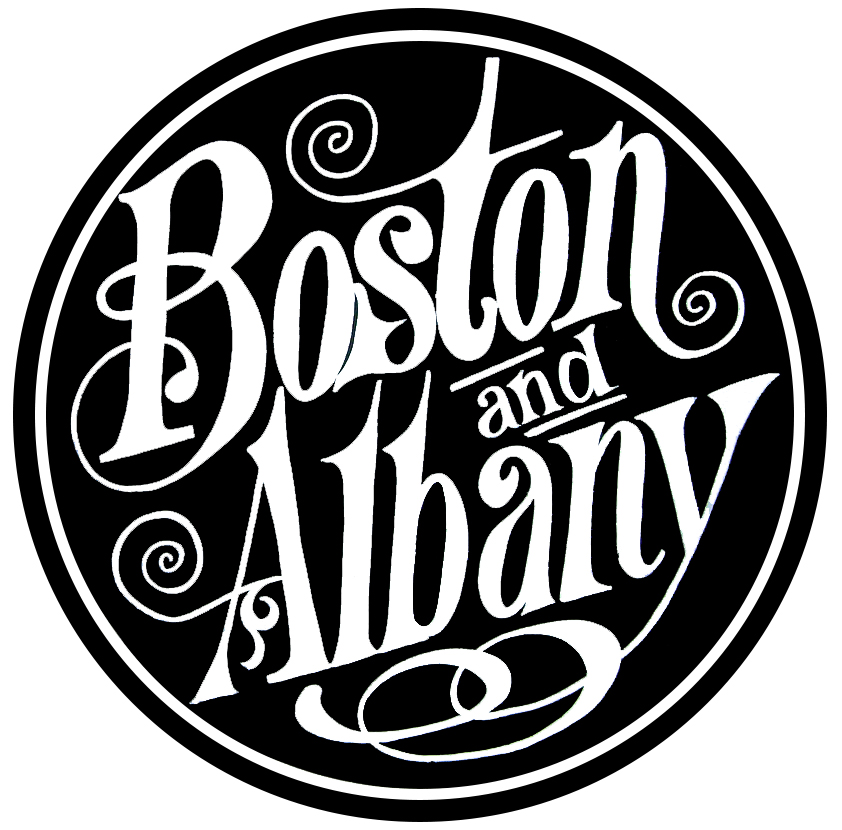 The New York Central was not shy about promoting its direct services to Boston.  Its most famous train was the appropriately named "New England States."  The railroad also provided connecting services.  The long-distance trains listed below, from the 1952 "Official Guide Of The Railways," are those which served Boston directly.

The B&W was the brainchild of William Gibbs McNeil and began construction in 1832; by April, 1834 it had opened 7 miles from Boston to the small community of Newton.  With strong financial backing the railroad was completed to Worcester the following year on July 3, 1835, a distance of 45 miles.

The relatively dense population in this area of New England, for that time period, enabled the B&W to flourish.  It was double-tracked in 1843 and had soon opened short branches to Saxonville, Newton Lower Falls, Milford, and Brookline Village.

The modern Boston & Albany was comprised of three primary components; the aforementioned Boston & Worcester, along with the Western Railroad and Albany & West Stockbridge.

Even before the B&W had reached Worcester the railroad's directors launched the Western Railroad; chartered on March 15, 1833 its goal was to continue west from this city and reach the New York state line.

There it would connect with the recently chartered (1828) Hudson & Berkshire Railroad (H&B), which eyed a connection from that point to the Hudson River at Hudson, New York. 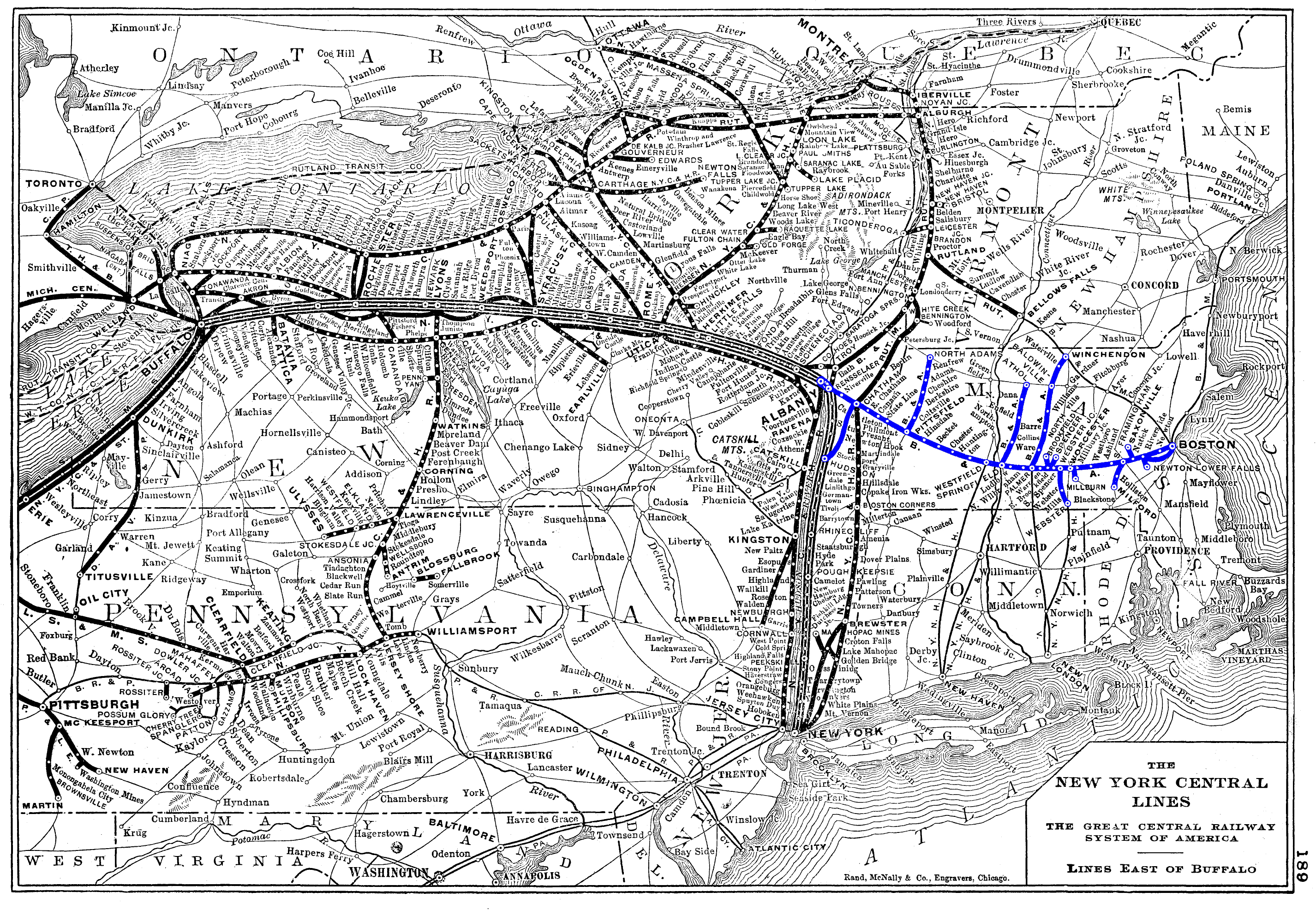 A 1910 system map of the Boston & Albany Railroad. The B&A lines are highlighted in blue. American-Rails.com collection.

The Western suffered from two obstacles: firstly was geography, as the railroad was forced to tackle the rugged Berkshire Mountains of western Massachusetts; secondly was economic with the financial Panic of 1837.

However, as the B&W's fortunes improved, additional funding blossomed for the Western's construction.   By 1839 rails had reached Springfield and the line was later finished to the state line in 1841. During an era with almost no mechanization, railroad construction was carried out via manual labor and an army of workers.

Despite this, the Western was built to very high standards. The project was led by chief engineer Major George Washington Whistler who had also worked for the Baltimore & Ohio, Boston & Lowell, and New York, Providence & Boston.

He devised numerous gradual "adhesion" grades to maintain a manageable profile in spite of the rugged terrain.  While this engineering tactic became standard practice in later years it was a relatively novel concept in the 1830s when engineers typically negotiated such topography by utilizing inclined planes.

West of Worcester, Whistler was able to keep the ruling grade at just 1.67% to the summit at Washington (slightly east of Pittsfield it sits at 1,459 feet above sea level), a remarkable feat for that time (its western flank was an even easier 1.38%).  To do so required numerous cuts and fills while crossing the Westfield River multiple times.

The Western  featured many cut-stone arch bridges made of granite along with a right-of-way laid out for a second-main line that was eventually installed.  Upon opening a connection with the H&B, the Western and Boston & Worcester had finally reached the Hudson River.  Unfortunately, the H&B had not been built to the same high standards. 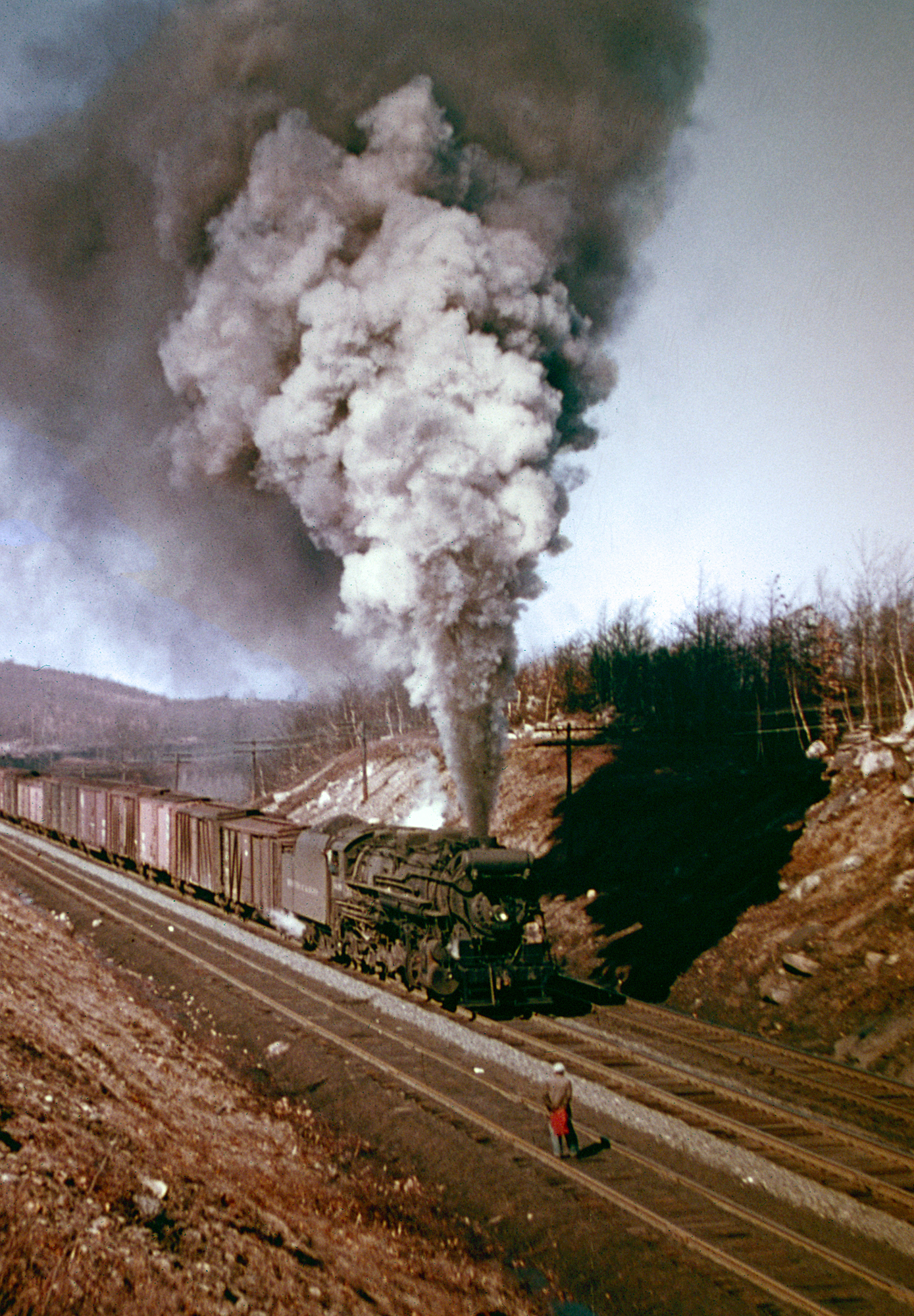 The successful 2-8-4 wheel arrangement was born on the Boston & Albany.  It was the first of the so-called "Super Power" locomotives, a design conceived by the Lima Locomotive Works.

The project began with New York Central Class H-7e Mikado #8000 (built in 1922 by Lima); engineers believed that by simply adding a larger firebox more power could be achieved.

What resulted was a locomotive with a bigger, 100 square-foot firebox (briefly re-classed as an H-10) that necessitated the need for an extra trailing axle giving the locomotive a 2-8-4 wheel arrangement.

The new steamer was designated Class A-1 and not only included an upgrade firebox but was also equipped with other features to improve horsepower such as a larger boiler, sufficient air-intake, booster, and limited cutoff.

The 2-8-4 (listed as #1) was then sent for testing along the stiff grades of the Boston & Albany in the Berkshire Mountains of northwestern Massachusetts in the spring of 1925 and proved a massive success.  To read more about the 2-8-4 please click here. 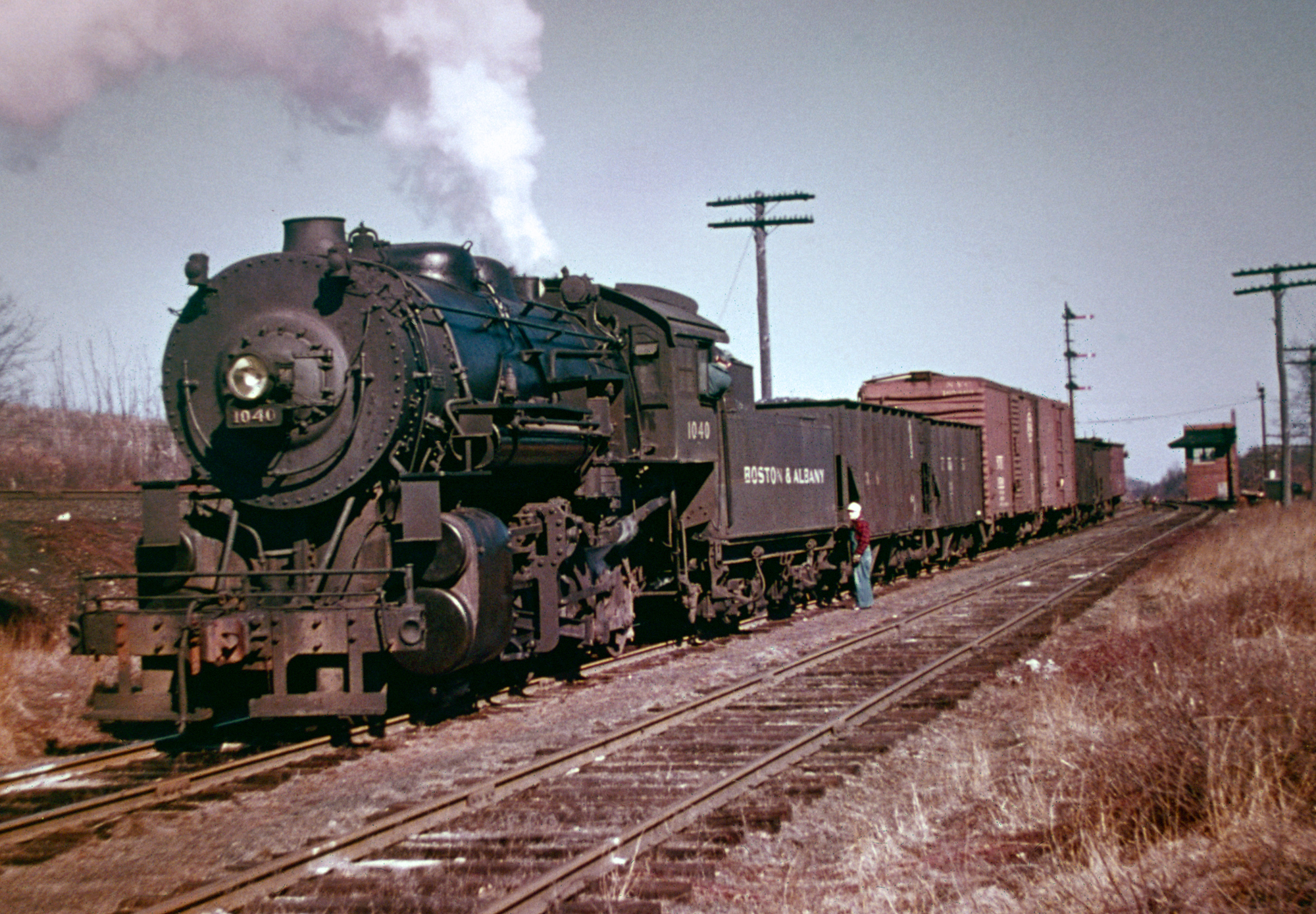 To achieve a better Hudson River link the Western formed a subsidiary, the Albany & West Stockbridge Railroad (A&WS).  The A&WS was essentially the New York arm of the Western and had been chartered a number of years earlier on May 5, 1836.

Like the Western, it was built to very high standards; the first segment opened from Greenbush (east of Albany) to Chatham on December 21, 1841 and completed to the state line on September 12, 1842.

It was retroactively leased to the Western Railroad on November 11, 1841.  The Albany & West Stockbridge's most important asset, aside from offering a direct link to Albany, was the State Line Tunnel, a 600-foot bore that was double-tracked.

With its opening, the need for the Hudson & Berkshire Railroad (renamed as the Hudson & Boston Railroad in 1855) greatly diminished.  Its paralleling main line between Chatham and the state line was abandoned in 1860.

Interestingly, the Chatham-Hudson segment remained well into the New York Central era as a cutoff between the B&A and Water Level Route main line.  It was not severed as a through artery until the 1950s.

The B&A was not a railroad laden with a heavy concentration of branch lines.  As the above map suggests, the road only had a handful of secondary corridors.

The road operated predominantly as an end-to-end system.  However, it did maintain a few feeder lines, aside from those completed east of Worcester by the mid-1840s. These included:

Also known as the Ware River Line, this system was completed from Palmer to a connection with the Boston & Maine at Winchendon in 1873.  It was acquired that year by the B&A.

This system was chartered separately as the Athol & Enfield Railroad and Springfield & North-Eastern Railroad in 1869.  They merged in 1872 and completed from Springfield to Athol in 1873.  The 48 mile line was acquired by the B&A in 1880.

Incorporated on March 3, 1842, the P&NA was projected to link its namesake cities, opening a connection from the Western Railroad (Pittsfield) to the Troy & Greenfield (Boston & Maine).  Before the line was even opened (December 1, 1846) it was leased to the Western.

Built by the Boston & Albany as the Providence, Webster & Springfield Railroad, this line opened from Webster Junction to Webster in 1884.

In addition to the lines mentioned above, the Boston & Albany also maintained short branches to Spencer and Brookfield, just west of Worcester.

By 1880 the B&A had blossomed into a highly successful operation, made even greater by a traffic agreement signed with Cornelius Vanderbilt's New York Central & Hudson River (NYC&HR) on March 3rd of that year.

This document was essentially an interchange partnership for the two roads and was the first step towards the B&A becoming an integrated part of the NYC&HR.

That occurred, officially, on July 1, 1900 when the Central leased the B&A.  To streamline the organization, all of the properties except for the Boston & Albany, Michigan Central, and "Big Four" were merged on December 22, 1914 into the second New York Central Railroad.

Interestingly, in an odd twist the Boston & Albany always remained an NYC subsidiary.  The reasoning was twofold: firstly, the merger of the Lake Shore & Michigan Southern had proven a complicated and frustrating affair for NYC management as some bondholders were unscrupulous in their efforts to earn maximum return.

Secondly, was sentimental.  After lease of the B&A, the NYC began eliminating company markings on equipment.  During a time when railroads were regularly in the public eye, there was an uproar in Massachusetts of this practice as locals did not take kindly to the B&A's disappearance.

In response, the NYC reversed course and B&A markings were reapplied.  Interestingly, the Boston & Albany name could still be found on equipment well into the diesel era (the line was fully dieselized by 1951).

By the early 20th century the B&A was a first class operation.  The New York Central continued to carry out infrastructure improvements on the road which was triple, and even quadrupled tracked, in some locations. 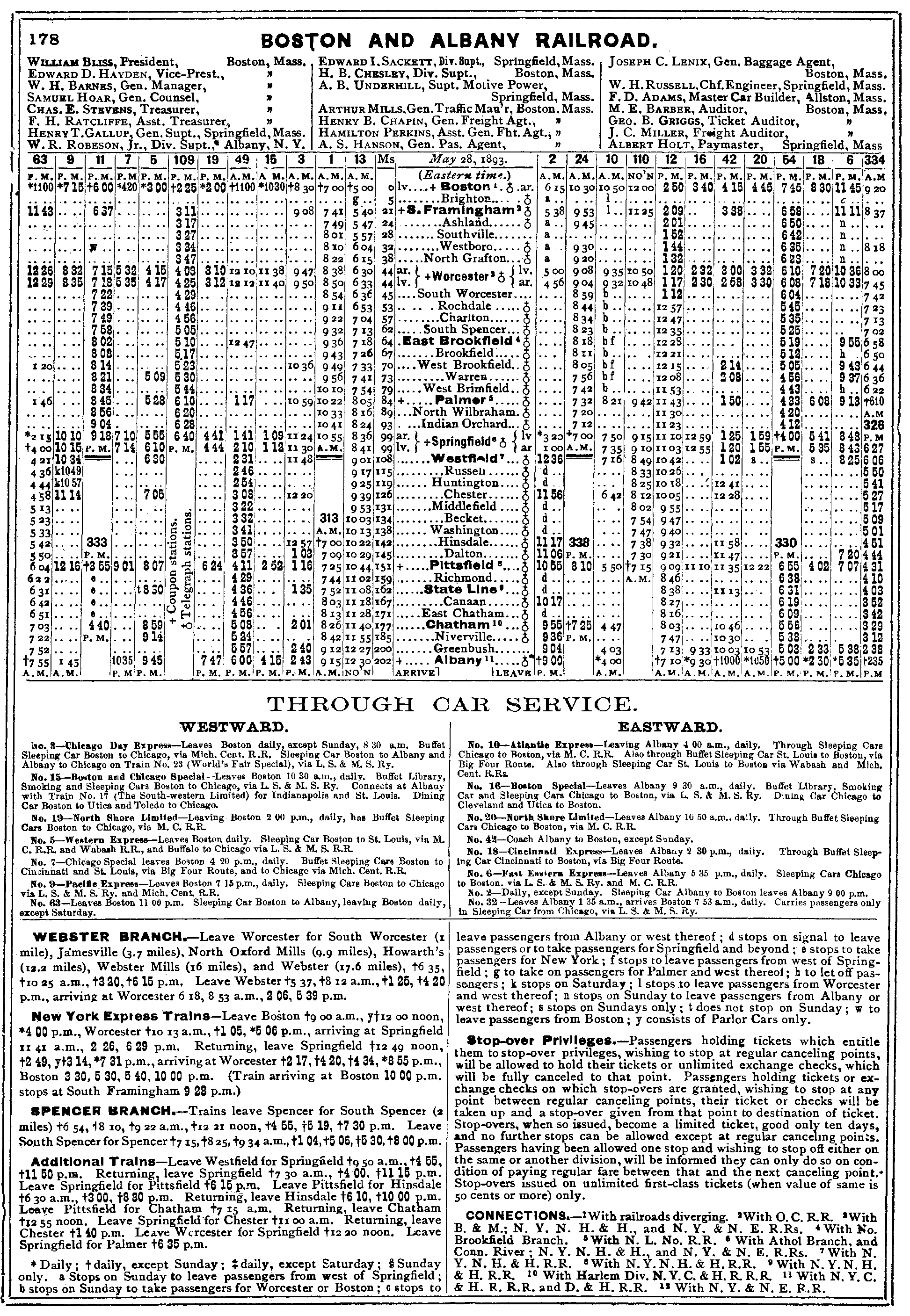 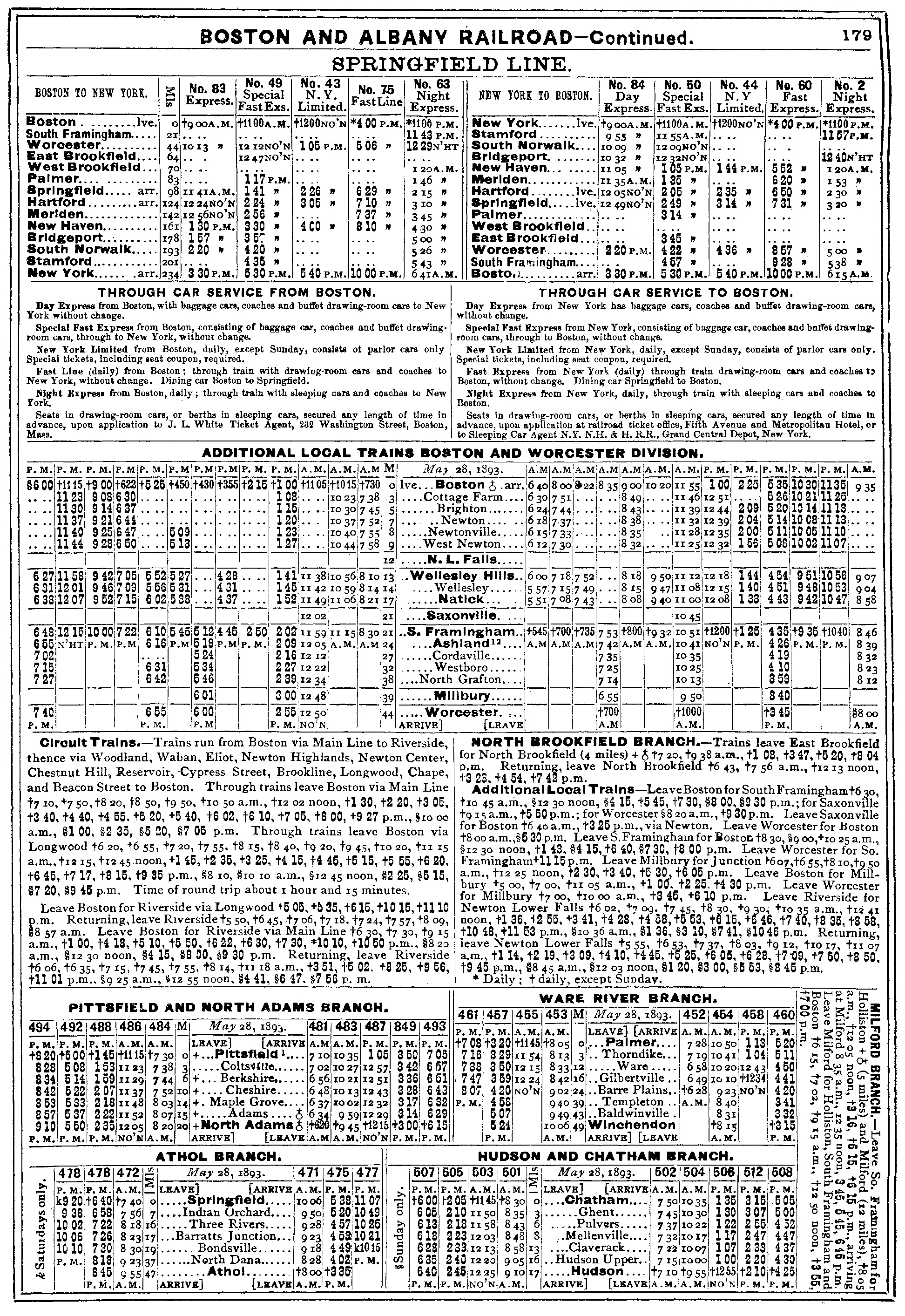 It remained an important component of the NYC network until the end when the New York Central disappeared into the disastrous Penn Central Transportation Company on February 1, 1968.

Even into the 1990s, during the Conrail era, former B&A lines, then formally known as the Albany Division, were still generally referred to by employees as the "B&A" or "Boston & Albany."

During this time the line's importance (then consisting of 190.7 miles from Boston to Selkirk Yard in Selkirk, New York) did not diminish although its ribbons of steel were greatly truncated; by 1993 only 86 miles remained double-tracked with the remainder single-track territory.

The reasoning was a combination of reduced demand and improved centralized traffic control that allowed for more tonnage to be handled on a single line.

Today, the old Boston & Albany main line is owned by CSX Transportation west of Worcester, Massachusetts while the Massachusetts Bay Transportation Authority (MBTA) now maintains the eastern segment from that point into Boston for suburban/regional service (with CSX continuing to utilize trackage rights).