Perhaps the last and most advanced freight electric locomotives to ever operate in the U.S. were built for the Pennsylvania Railroad by General Electric.

Dubbed E44s the electrics featured the latest technologies available and were quite efficient workhorses.

The E44s began arriving on the Pennsy in the late 1950s and eventually the motors wound up with three different owners after the Penn Central collapse of the 1970s handed them over to Conrail in 1976.

Conrail was never particularly interested in electric freight operations, especially after the North East Corridor was given to Amtrak upon the Penn Central's collapse during the 1970's.

As a result, freight operators are charged high fees to use the line, which is largely kept clear for passenger service.  This decision remains bitterly opposed to this day as the corridor naturally is the best artery to transport freight between the Northeast's largest cities.

In the modern era, freight trains are primarily relegated to overnight operation.

For this reason, along with a number of other factors, Conrail gave up on electric operation in the mid-1980s.  Today, one E44 stands preserved, #4465 on display inside the Railroad Museum of Pennsylvania at Strasburg. 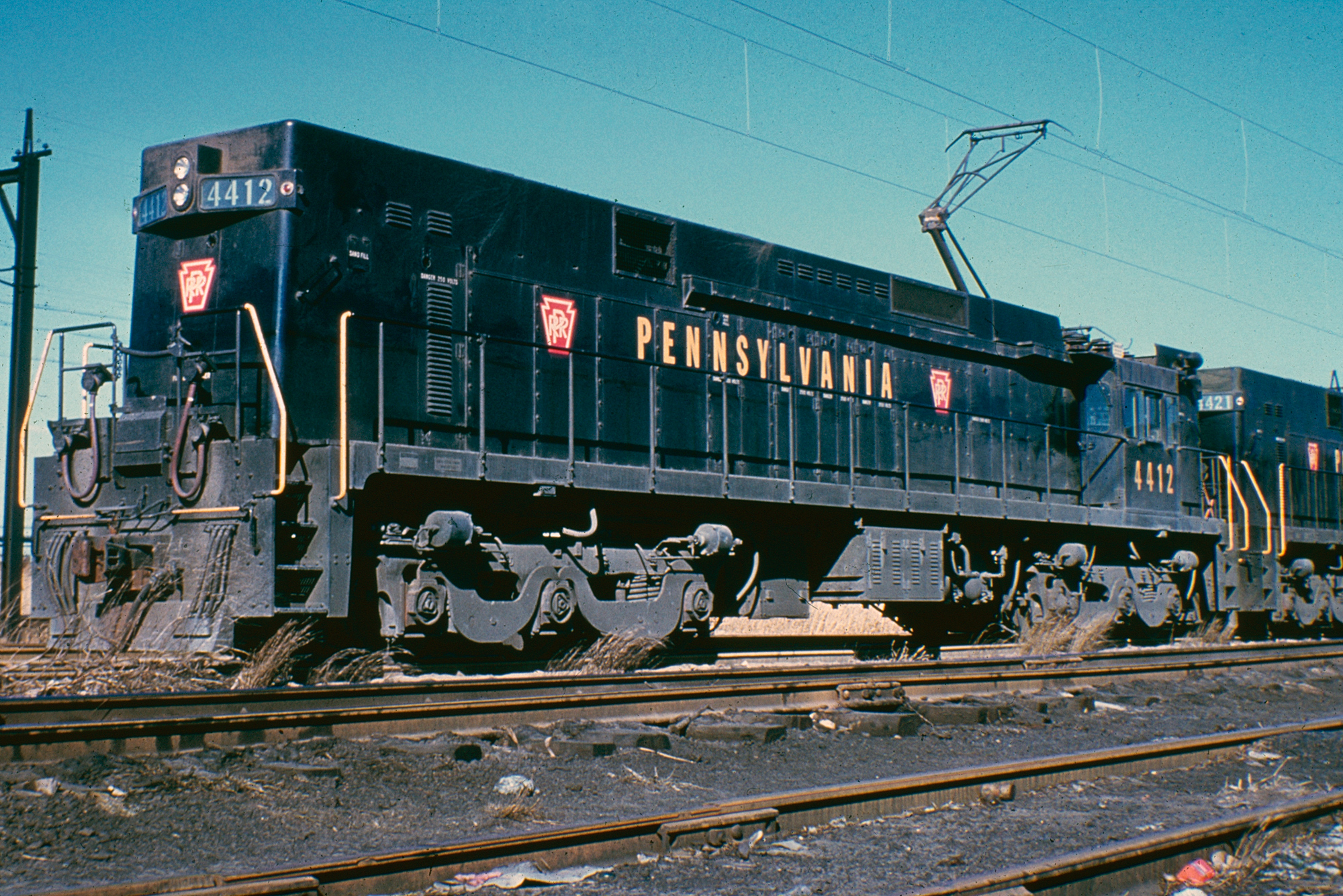 The E44 freight electric locomotive was an Ignitron-rectifier built by GE in 1959 as the PRR needed a new freight locomotive to replace its aging fleet of P5s and supplement its GG1s (which by the late 1950s were used in both freight and passenger service).

In total the Pennsylvania would come to own a fleet of 66 E44s, that were quite similar to the Virginian’s EL-C rectifiers, later known as E33s, albeit a bit more powerful.

Interestingly, the E44 model resembled the E33s for a very good reason, the PRR used the design as a template for its own freight motor. 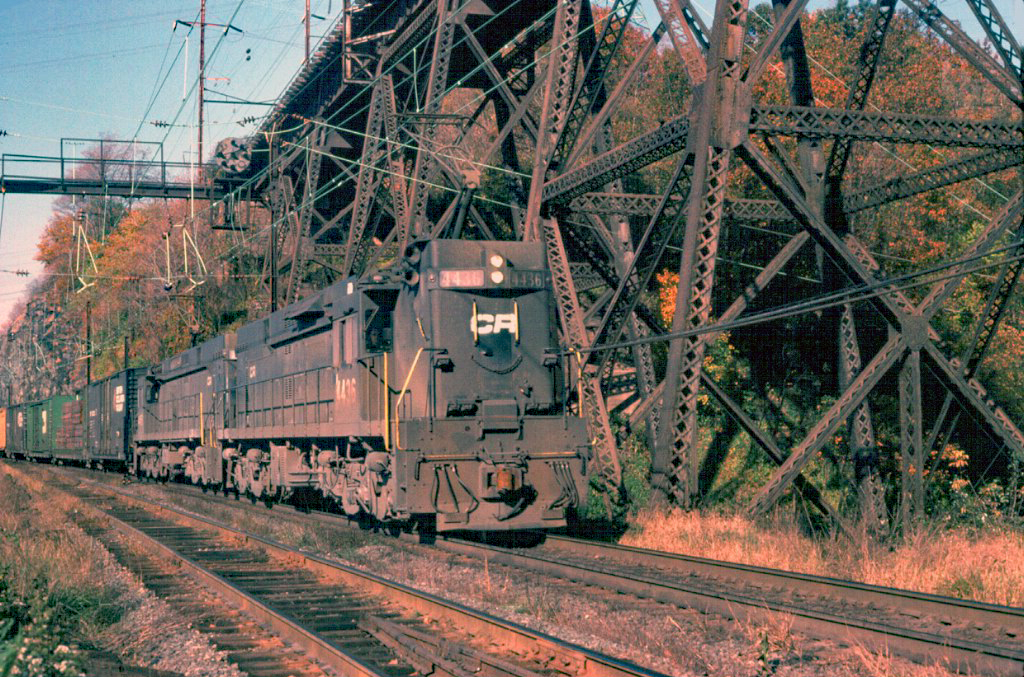 Still practically brand new the PRR was quite impressed with the E33s and contracted with General Electric to use the design as a basis for its own new model.

From a technical standpoint the E44 used six GE Model 752 E5 traction motors. The primary difference, internally, of the E44 was its means of converting AC current to DC.

The first E44s the Pennsy received used Ignitron tubes to convert the current.

However, the last batch of locomotives used newer and less maintenance intensive, air-cooled silicon diode rectifiers. These upgraded locomotives were dubbed E44As to distinguish them from the original models. 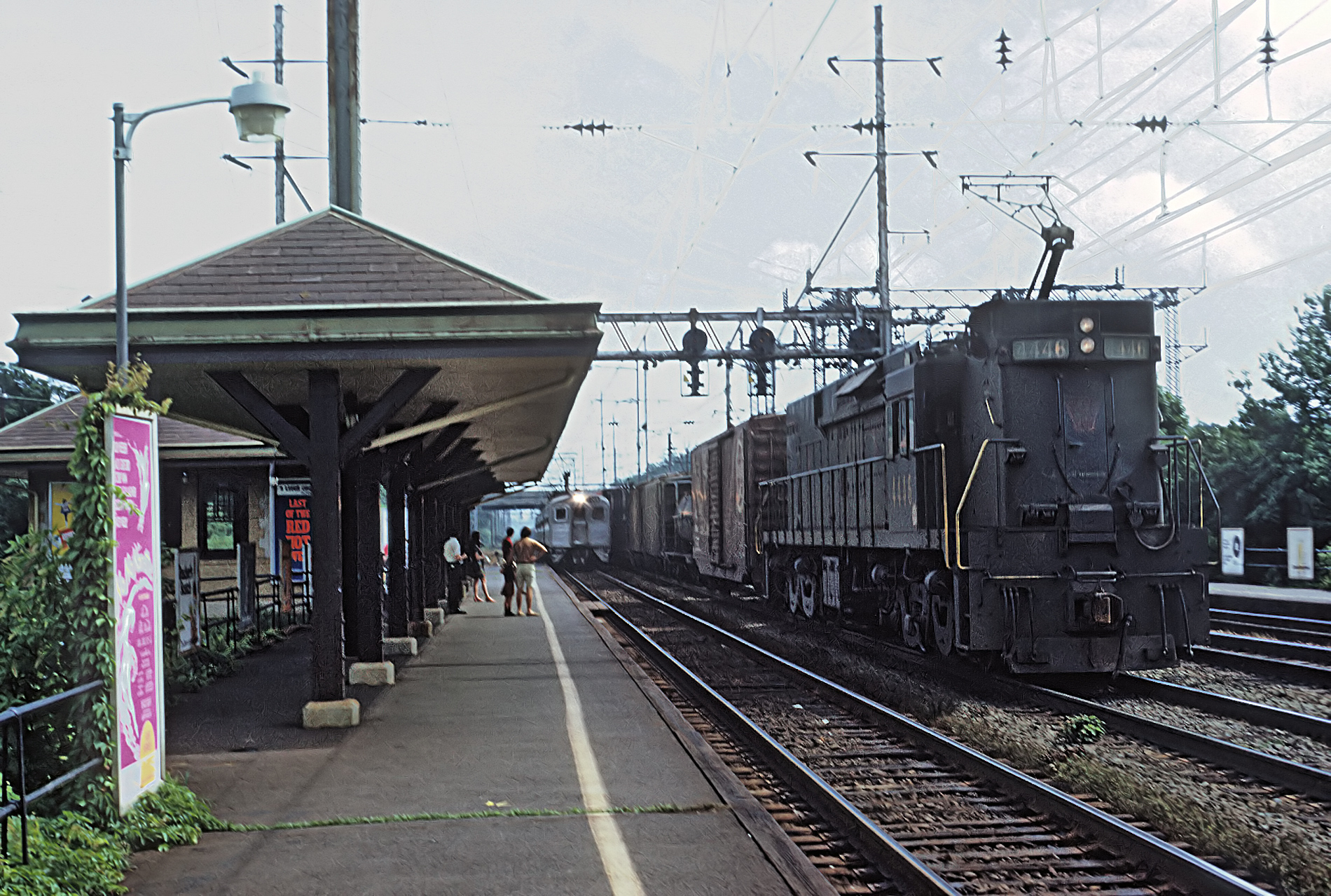 Penn Central E44 #4446 hustles southbound past the station at Princeton Junction, New Jersey as a commuter train is stopped on the next track over during August of 1971. Roger Puta photo.

The model became the face of the Pennsylvania's late electrified operations prior to the transition to Penn Central in the late 1960s.

With such a large fleet the railroad used the E44s all over its electrified lines, particularly along the Northeast Corridor.

If you were lucky at the time you could occasionally even catch the freight locomotives in passenger services, used as needed, usually zooming along in commuter service despite the fact they were not really intended for use in such a capacity.

Overall, the E44s proved to be quite reliable freight motors and while they were geared for speeds of up to 70 mph they usually operated somewhere below this threshold.

Extremely quiet in service, they effortlessly lugged freight trains down the line with relative ease.

The model was delivered to the Pennsylvania in a very standard all-black with the company's classic keystone logo in crimson red and yellow featuring the interconnected "PRR".

All 66 units were delivered between 1960 and 1963, which by that time was the railroad's final days as an independent carrier.

Too rigidly managed during times that called for change to survive in the industry, the PRR was out of money and running on borrowed time.

During early days, such as prior to World War II, the railroad would likely have purchased many more new electrics of various designs, notably for passenger service, instead of relying on its worn out fleet of GG1s. 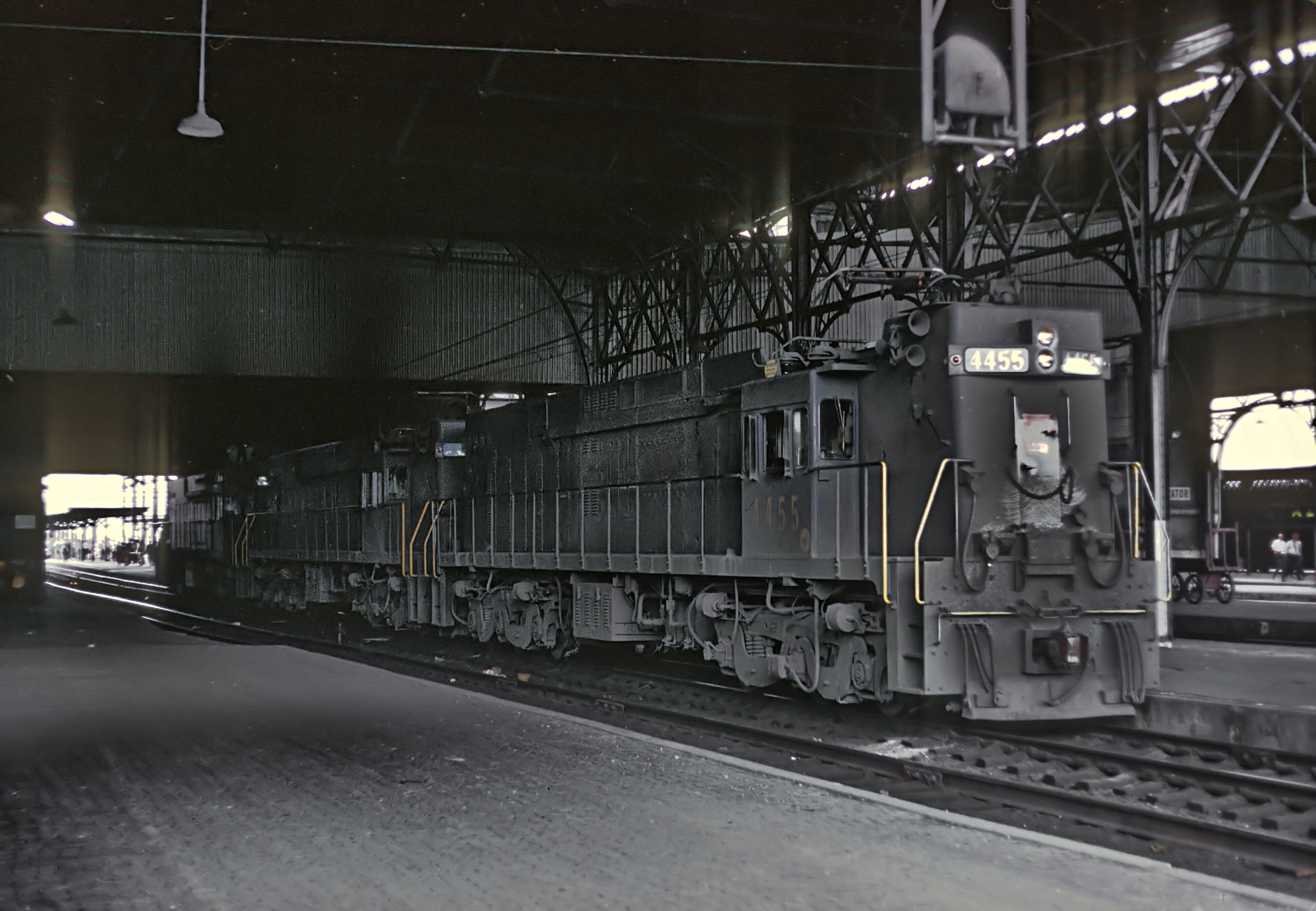 A trio of Penn Central E44's are under the train shed at Harrisburg, Pennsylvania on May 18, 1969. Roger Puta photo.

In any event, after the collapse of the Penn Central in 1970 and the creation of Conrail in the spring of 1976 the locomotives were used sporadically until 1981 when most were stored at the PRR’s old Enola Yard.

By the mid-1980s all had been sold by Conrail, interestingly two buyers of which were Amtrak and NJ Transit, which intended to use them in passenger service. 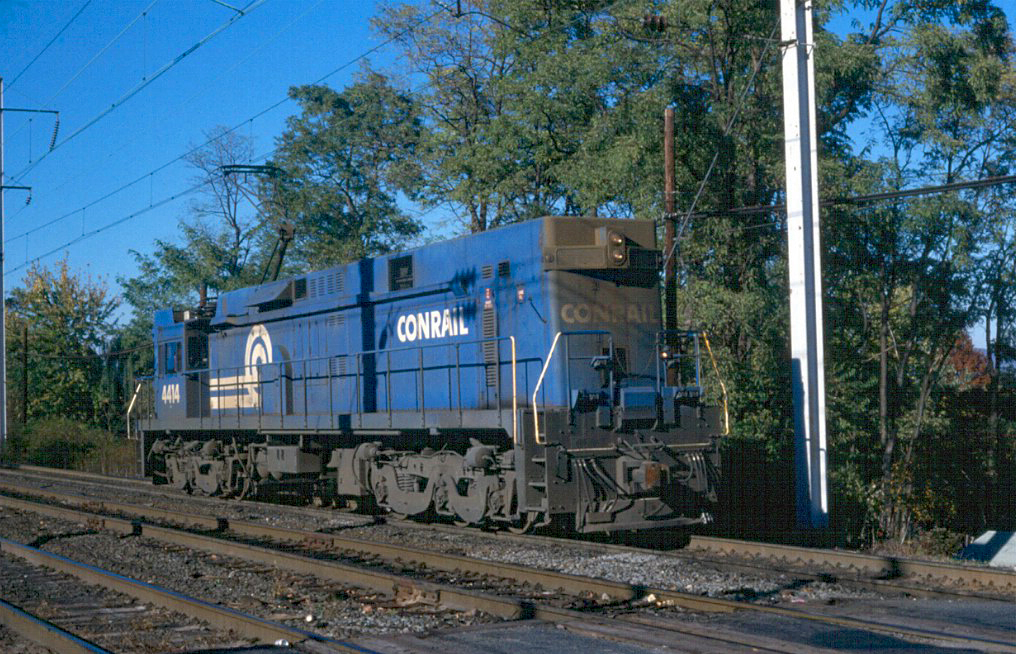 Conrail E-44 #4414 runs light between assignments near Wormleysburg, Pennsylvania during the fall of 1978. Randy Kotuby photo.

Dissatisfied with their performance both passenger carriers elected to sell them either outright or for scrap.

Unfortunately, the E44 was similar to late model steam locomotives that despite being well conceived and designed, was retired well too early.

The youngest units were barely 20 years of age before being parked. Today, at last one E44 has been preserved at the Railroad Museum of Pennsylvania near Strasburg.