The Rocky Mountain Rocket was the Rock Island's first, true long distance passenger train. The Rock (officially known as the Chicago, Rock Island & Pacific) is commonly remembered as The Route of the Rockets, a slogan it marketed for years to showcase its fleet of well-known trains serving the Midwest.

Nevertheless, these early trains turned out quite successful for a number of years. Their profitability and patronage prompted management to launch a whole fleet of long distance Rockets.

Despite providing good service for many years and sporting stunning livery the Rocky Mountain Rocket struggled to remain competitive against the Union Pacific, Burlington, and Missouri Pacific.

This factor, a crumbling financial record, and decreasing ridership after World War II prompted the Rock to cancel its heralded train in the mid-1960s. 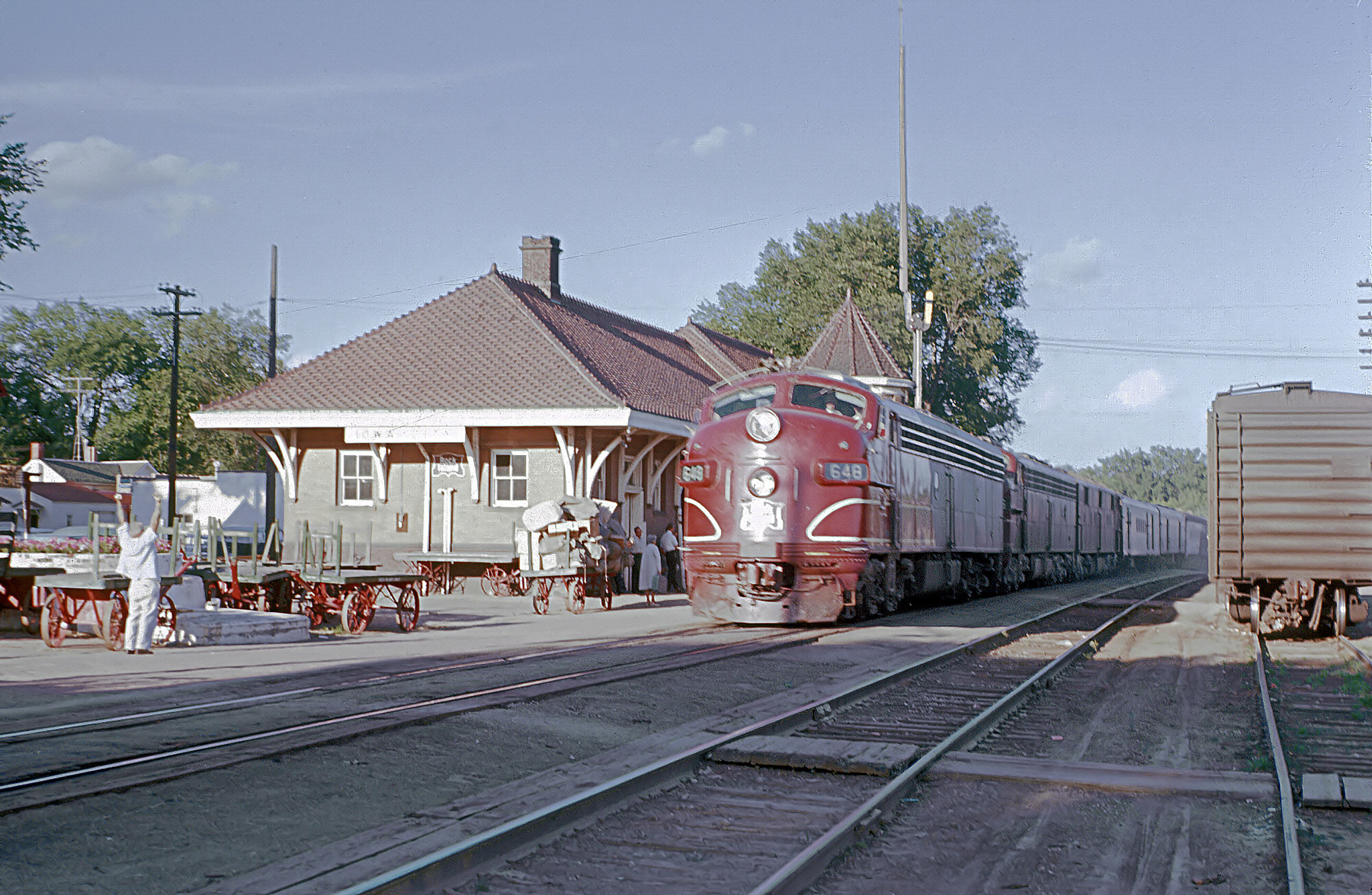 This wonderful scene was captured by Roger Puta featuring train #7, the westbound "Rocky Mountain Rocket," arriving at Iowa City, Iowa at around 5:50 PM on a July evening in 1963. Up front is E8A #648.

The Rocket trains received their name from the first steam locomotive to ever operate on the Rock Island known as the “Rocket.”

The fleet has its beginnings dating to 1937 when the short, regional services began to several different cities which included the Peoria Rocket, Des Moines Rocket, Texas Rocket, Denver Rocket, and Kansas City Rocket were completely streamlined and powered by a unique Electro-Motive Corporation TA-model diesel locomotive (forerunner to the successful E series) that pulled a four-car consist.

So successful were these early consists, adorned in a beautiful livery of handsome maroon and bright silver, that the Rock Island decided it would branch out into true, long-distance passenger service. 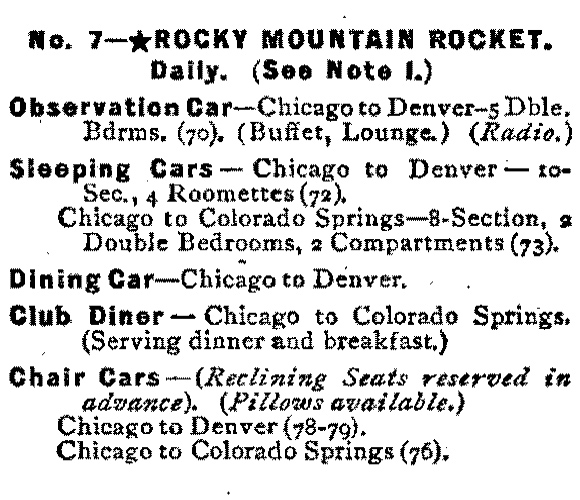 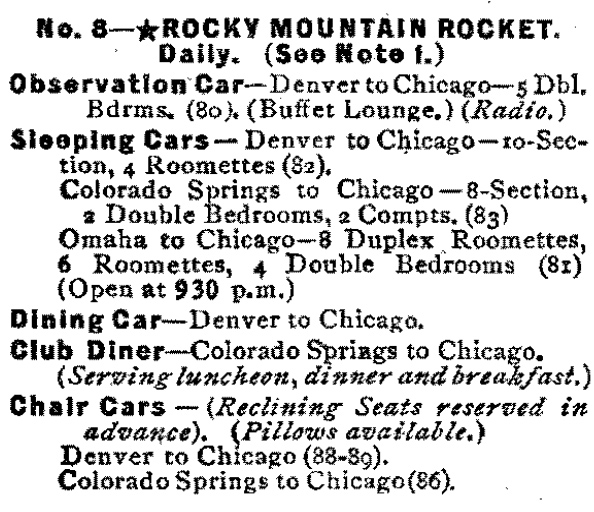 The first of these was the railroad’s Rocky Mountain Rocket, which competed directly against Union Pacific’s City of St. Louis and City of Denver, Missouri Pacific’s Colorado Eagle, and the Burlington’s Denver Zephyr between Chicago and Denver via Kansas City (a section also split to Colorado Springs).

Needless to say, competition was very stiff.  The train debuted on November 12, 1939 featuring all stainless-steel equipment from Pullman-Standard and the Budd Company with power provided by a pair of Electro-Motive's E3A diesels, #625-626.

By 1940 more new diesels had arrived, E6As #627-631.  Instead of purchasing matching cabless E6Bs, then the common means of adding new power and sustaining the streamlined look, Rock Island approached Electro-Motive with a novel idea.

Since the Rocky Mountain Rocket split at Limon, Colorado (to reach Denver or Colorado Springs) the Rock was looking for a way to reduce the time required to complete the power and consist swap.  Why not simply customize an E6B to offer cab controls?

This would allow the lead, standard E6A to cut off, gather the rest of its train once the specially-adapted E6B had done the same, and continue on its way.  What resulted was the AB6.

The special design was crafted at Electro-Motive's plant and was basically an E6B as described above, with subtle beveling to improve its head-end cosmetics (little more than a large, centered headlight, number-boards, and front windshield).

The Rock acquired two, #750-751, but never went back to Electro-Motive for more. Aside from EMD products other power to head the train included a few, rare Alco DL-series variants (the DL107, DL105, and DL-103).

The Rocky Mountain Rocket held its own for many years against competitors despite carrying a schedule over three hours longer.

One of its particular strengths was the train's densely populated route the train.  It featured what would become one of the classic passenger liveries of deep crimson red and stainless steel with white trim.

The railroad would eventually use a version of this livery for its freight locomotives as well although this version was slightly different using black and crimson with white trim.

After World War II newer E7As and E8As led the Rocky Mountain although clad in a much more plain solid crimson scheme.

According to the Rock Island's May, 1941 timetable the Rocky Mountain Rocket (listed as Trains #7 and #8 on the railroad's official timetable) left Chicago's La Salle Street Station at 1:55 pm and could arrive in Denver, Colorado by 8:25 am the following day, reaching the railroad's western-most station at Colorado Springs ten minutes later.

In total the train covered the distance in just under 20 hours carrying an average train speed of between 55 and 58 mph.

This was an impressive speed despite the Rocky Mountain's 3+ hour lag behind its competitors.  Of course, in later years the Rock had trouble sustaining such speeds with financial problems and deferred maintenance issues mounting. 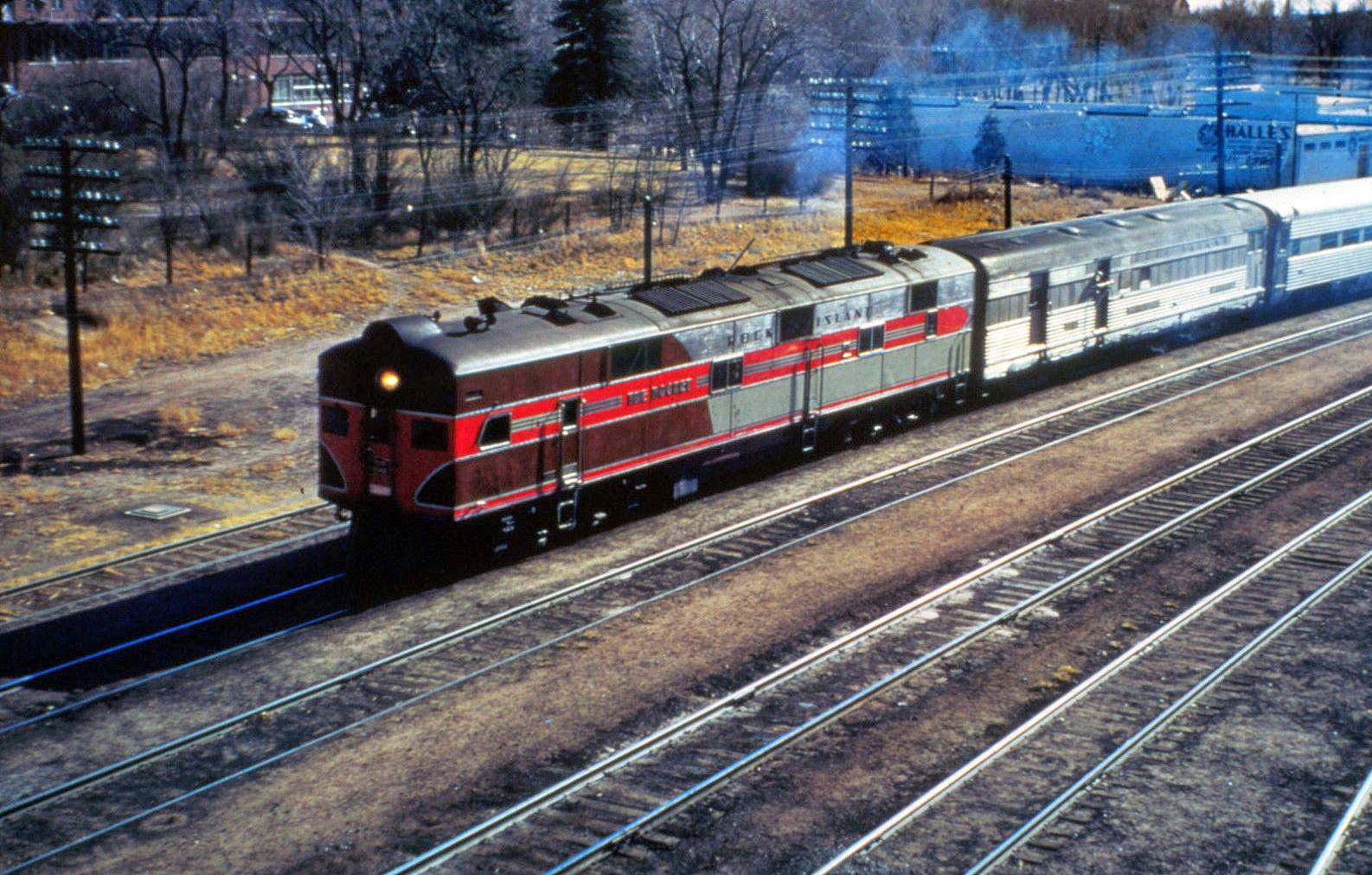 One of the Rock Island's unique AB6 locomotives has the Colorado Springs section of the "Rocky Mountain Rocket" in a scene that probably dates to the 1940s or early 1950s.

Despite the train's highly populated route and good service the Rocky Mountain was the weak link and simply could not effectively compete with the faster running times of Union Pacific and Burlington, both of whom also did not face the same financial problems.

Only worsening the problem was the declining interest in rail travel after World War II when highways and airlines lured the public away from trains coupled with the new Interstate highway system of the 1950s.

After only 27 years of operation the Rocky Mountain Rocket was officially discontinued by the Rock Island in October of 1966. The Electro-Motive E series units were reassigned to other intercity trains or worked suburban service around Chicago.