In terms of pure royalty, elegance, and opulence no passenger train ever operated could compare to the Baltimore & Ohio's Royal Blue. The train had a history dating back to the late 19th century.

It was briefly discontinued during World War I, only to return directly afterwards with an increased vigor as the B&O looked to remain very competitive with the larger Pennsylvania Railroad in the cutthroat NYC-Baltimore/D.C. market.

While the B&O, which named its route between the two cities as the Royal Blue Line, tried virtually every marketing attempt available to draw patrons to its posh train (from the incredible services to a sleek, streamlined look) the railroad simply could not compete with the PRR's vast resources, faster schedule, and more direct routes.

In the late 1950s the railroad finally ceded the market to its largest rival and canceled the train after more than 60 years of operation.

The history of the B&O's Royal Blue train actually dated as far back as the 1880s.

In 1886, thanks to the efforts of then B&O president John Garrett the B&O opened a new route between Baltimore/Washington, D.C. and Philadelphia thus entering the extremely competitive market against the Pennsylvania Railroad.

However, to reach New York City the B&O needed help, which it found via the Philadelphia & Reading Railroad east of Philly and the Central Railroad of New Jersey. 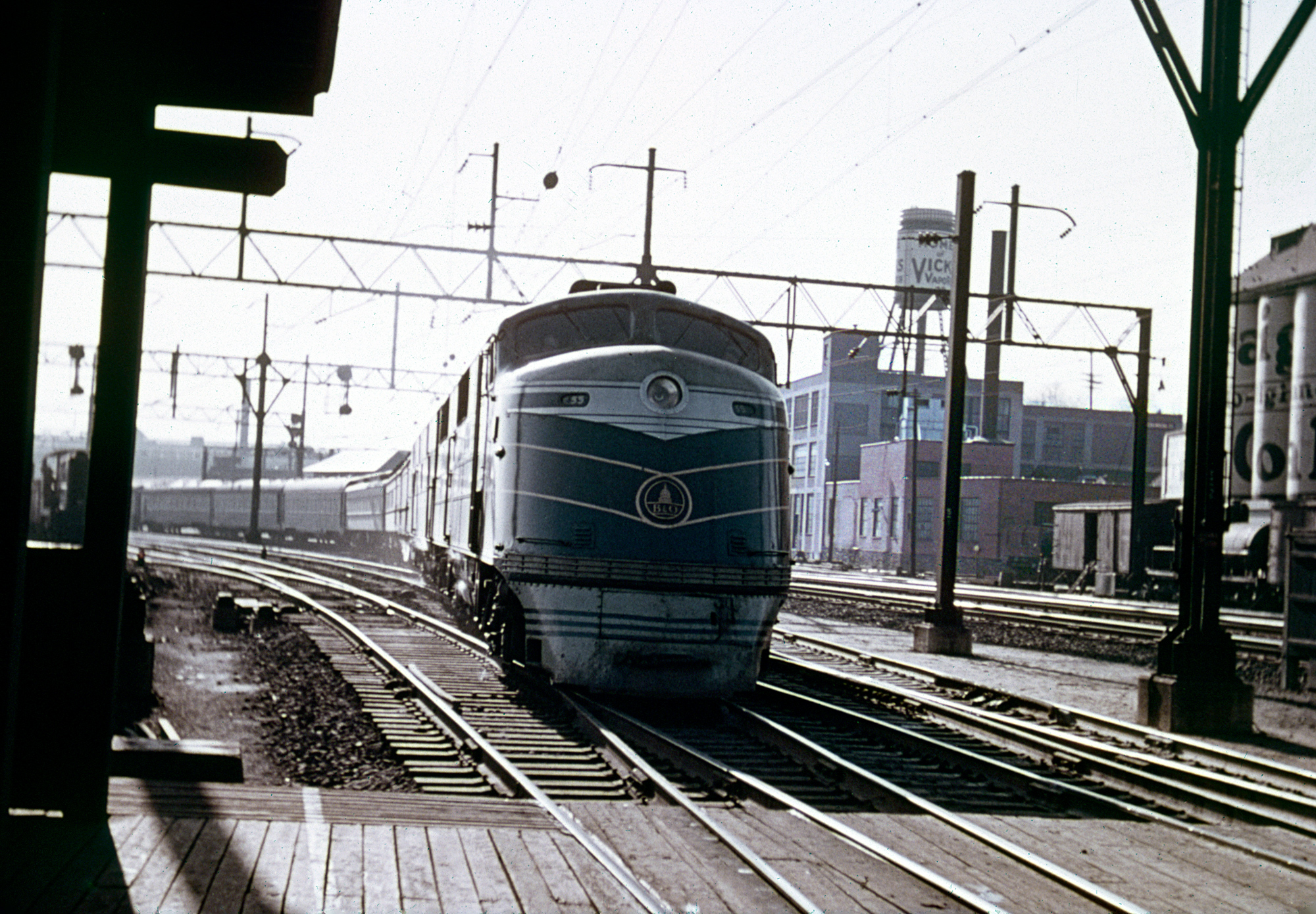 This latter railroad gave the B&O direct access to Jersey City via its Jersey City Terminal (also known as Communipaw Terminal), directly across the river from downtown Manhattan.

Unfortunately, the B&O never purchased the smaller Philadelphia, Wilmington & Baltimore Railroad, which would have given it a direct connection between Philly and NYC. The PW&B, instead, became the PRR's main line after 1881 between the two major cities.

In any event, with its two allying railroads the Baltimore & Ohio now had a direct, if not a somewhat roundabout, connection to the same markets and dubbed it the Royal Blue Line.

However, all three lines worked hard to make the route as fast as possible so as to maintain a competitive advantage against the PRR line. Save for the lack of access into downtown New York City this goal was accomplished for the most part.

Before the B&O actually launched the train it had been providing limited services between Baltimore/D.C. and New York but was not very competitive against the PRR for two reasons:

The first train was actually commissioned on July 31, 1890, using a specially designed M-1 Class 4-4-0 American Type steam locomotive that could reach speeds as high as 90 miles per hour thanks to its large 78-inch driving wheels.

It was this first train that set the standard for the railroad's service over the corridor, and in some ways the industry in general.

The Baltimore & Ohio added its own equipment (diners, parlors, and sleepers) to complete what would become ten trainsets. These were no ordinary cars.

The new equipment plus the B&O's overhauled cars were incredibly ornate. The interiors were decorated in expensive mahogany woods and there were separate sections for smoking.

The upholstery used in the coach seats featured old-gold plush and all of the cars were steam heated with Pintsch gas lighting. The level of interior craftsmanship in these cars, particularly with the woodwork, is something that we will likely never see again.

The exterior of the cars was just as impressive featuring a deep blue livery with gold trim, paired windows with etched, frosted glass, and iron scrollwork on the platform railings.

Since the equipment operated on all three railroads none of the company names were listed and instead, "New York, Philadelphia, Baltimore & Washington" was stenciled near the top.

However, one could distinguish the cars by owner depending on which state seal was featured (Maryland for the B&O, Pennsylvania for the Reading, and New Jersey for the CNJ).

Finally, in another first for passenger trains the entire train was equipped with enclosed vestibules instead of open platforms, a feature that would become increasingly common in the future as it enabled passengers to walk from car to car without being exposed to the elements.

In 1895 the B&O's route gained a major strategic advantage when it eliminated the ferry crossing at Baltimore Harbor by opening the Baltimore Belt Railroad, which tied in its New York line with its western route to Cumberland.

The line was only 7.3 miles in length but was also noted for its accomplishments outside of its strategic value including the fact that it was the first electrified route for a main line railroad in the United States and its 1.25-mile long Howard Tunnel.

With the opening of the new line the B&O felt it needed another grand entrance for passengers into the city and constructed the Mount Royal Station at the corner of North Howard Street and West Preston Street.  For a more detailed overview of Mount Royal please click here. 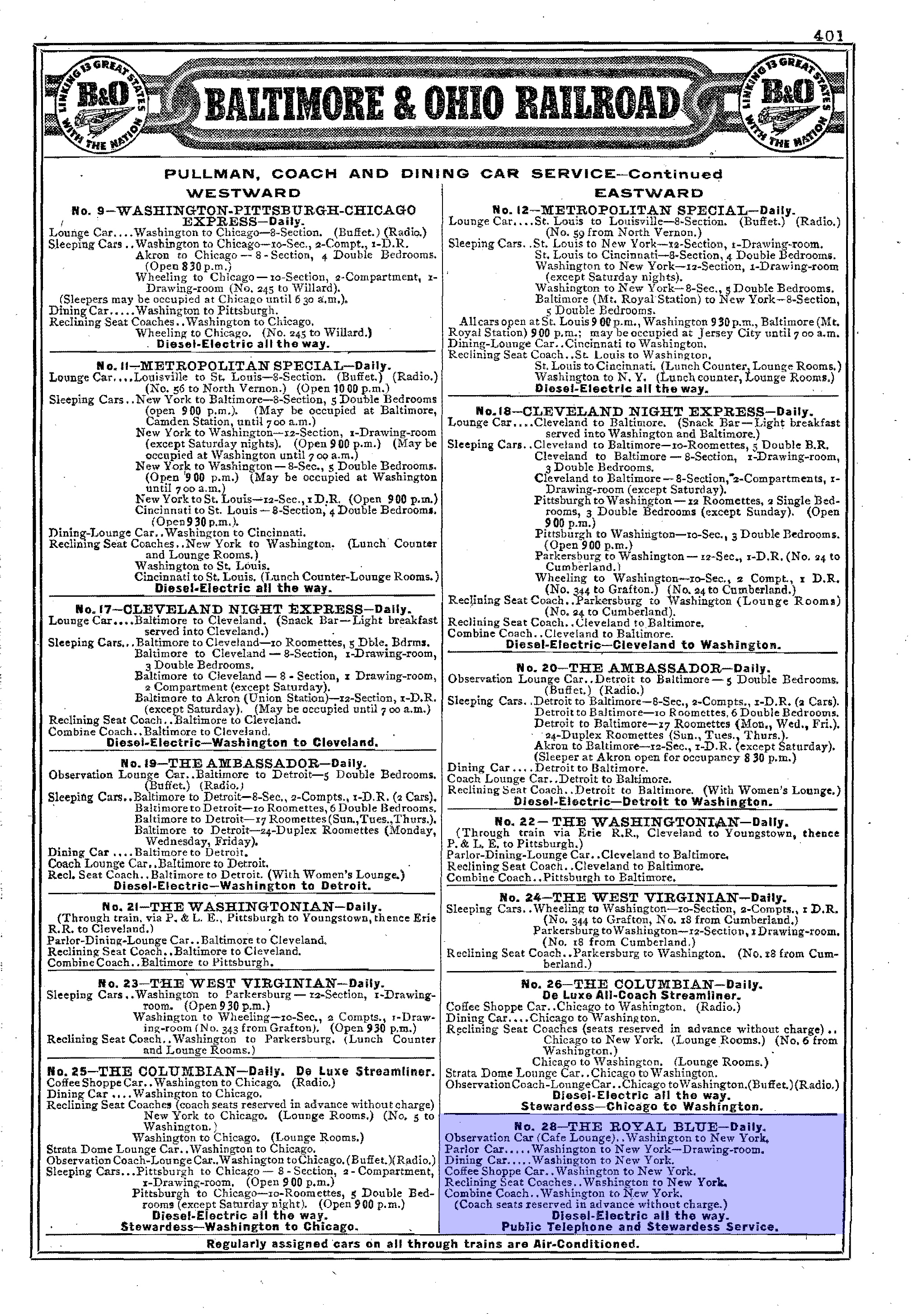 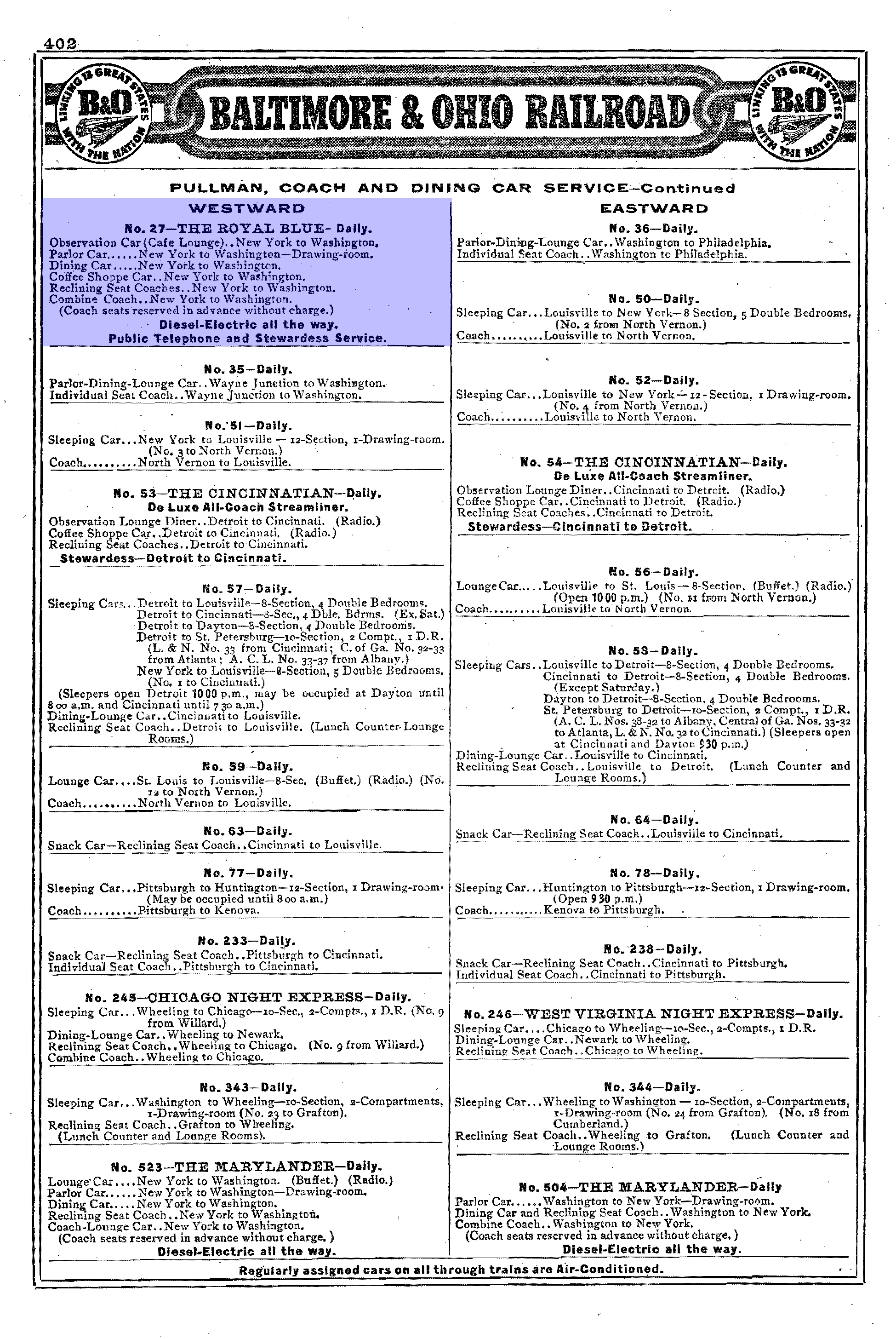 With a direct entrance into Baltimore, the B&O wasted no time in redirecting the Royal Blue over the new line with the first train leaving Mount Royal Station on June 27, 1895. In terms of equipment not much changed with the train save for the electric locomotives taking over while in Baltimore.

The time during World War I and governmental control via the United States Railroad Administration meant that railroads were struggling to keep up with the stifling demands to move enormous amounts of people and freight for the war effort.

As a means of reducing the burden of the PRR in hauling New York-Washington passengers the USRA allowed the B&O to use Pennsylvania Station in April, 1918 via the Lehigh Valley Railroad between Manville, New Jersey and the PRR's main line at Hunter.

However, it was during the war that the B&O discontinued the train for the first time, in 1918, after the European royalty associations with the train were frowned upon. Interestingly, after USRA control ended on March 1, 1920 the PRR continued to let the B&O use Penn Station signing an official contract on July 13, 1921.

The contract was meant to expire on September 25, 1925 but thanks to B&O president Daniel Willard's efforts he was able to achieve an extension until September 1, 1926. Despite the extension the B&O had to look to the future after the contract expired.

In 1927 the former train that was the train received new motive power in the way of B&O's new Class P-7 President Class 4-6-2 Pacific steam locomotives.

These locomotives featured an olive green livery with gold and red pinstriping. Despite the loss of the name, President Willard made sure that the train remained a top-notch, luxurious operation.

It was during the mid-1920s, after the B&O lost access to Penn Station that the PRR put increasing pressure on its competitor for dominance in the Washington-New York corridor by announcing that it would completely electrify the route increasing both speed, efficiency, and service.

To counter this Willard launched a marketing campaign that the B&O was always remembered by, personalized service to an incredible degree.

Although the railroad could not reach Manhattan directly by train, they would board B&O-owned buses that crossed the Hudson River on the ferries as well.

From there they would travel to 42nd Street near the New York Central's Grand Central Terminal, which connected to the station via an elaborate Art Deco concourse and be given the choice of taking one of four routes through the city reaching the Vanderbilt Hotel, Wanamaker's, Columbus Circle, or the Rockefeller Center.

The 1930s saw the Royal Blue name brought back with an even greater vigor by the Baltimore & Ohio and Daniel Willard as the company attempted to remain very competitive with the Pennsylvania Railroad.

In the 1935 the PRR fully completed its electrification and that same year saw the B&O purchase two streamlined trainsets from the American Car & Foundry via a loan from the U.S. Reconstruction Finance Corporation (the B&O was strapped financially at the time due to the depression).

One train was built using aluminum and used as the Royal Blue while the other of Cor-Ten steel and sent west for use as the Abraham Lincoln between St. Louis and Chicago.

For power the train featured two experimental steam locomotives both built by the railroad's Mount Clare Shops in Baltimore; a light weight, high speed 4-4-4 named the Lady Baltimore and a 4-6-4 Hudson Type named the Lord Baltimore.

To match the streamlined trainset both locomotives were also semi-streamlined and painted in a deep blue with gold trim to match the train.  Additionally, the B&O ordered an 1,800 horsepower boxcab-type diesel locomotive from the Electro-Motive Corporation, #50 that was sent west to power the Abraham Lincoln.

Some of the notable features with the new streamliner included air-conditioning (a first in the industry) and exquisite Chesapeake Bay entrees and dining that kept some folks coming back just for the food!

Overall, the train was an eight-car affair; a baggage-mail car, three coaches with reclining seats to hold 64 passengers each, a diner-lunch counter car, two parlors, and a round-end parlor-lounge-observation (a buffet-lounge later replaced one of the coaches).

Unfortunately, Willard and the railroad were not pleased with the aluminum streamliner and looked to replace it after less than two years of service. 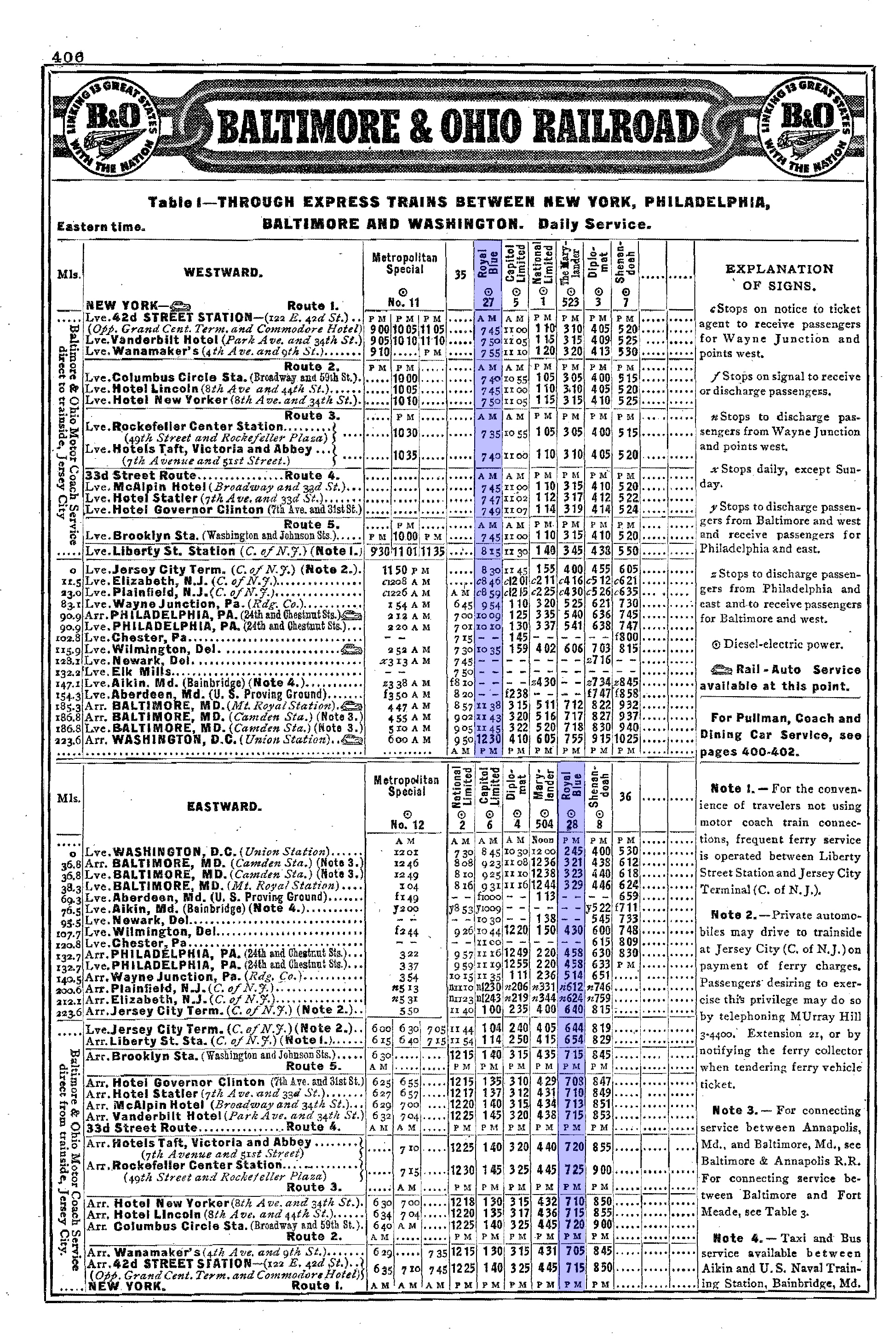 As such an "improved" Royal Blue debuted on April 25, 1937. This train was designed and styled partially by famed industrial designer Otto Kuhler and was also an all-streamlined eight-car set (built by the B&O's own shops from heavyweight equipment) featuring a beautiful dark blue and gray livery with gold pinstriping (a look that would come to define the B&O for years to come).

For power the new train featured a streamlined bullet-nose P-7 Class 4-6-2 Pacific, #5304, which was also styled by Kuhler. This locomotive would probably have stolen the publicity had it not been for a new streamlined diesel locomotive that also debuted in the train at the same time, an EA and booster known as an EB.

After World War II the B&O completely dieselized the train supplementing its EA/EB sets with E6s and E7s. However, the railroad did not purchase any new equipment for the train.

While the new train worked well in increasing ridership for the Baltimore & Ohio it did not sustain the railroad's long term viability in the New York-Washington market.

Between the Pennsylvania Railroad's dominance and decreasing patronage with passenger trains after World War II the B&O simply could not compete posting increasing deficits annually. Finally, the railroad made the hard decision of canceling the train with the final run occurring on April 26, 1958.

This last consist was met with an incredible amount of fanfare as reporters from the New York Times, New York Post, Life magazine and Saturday Evening Post all lamented on its passing.