For many years tell-tales were important structures that could be found all along railroad rights-of-way.

Prior to the modern era of air and pneumatic brakes a crewman known as a brakeman was required to scale the tops of freight cars, while the train was at-speed or in motion, and manually set the each car's braking system.

Obviously, this practice was not only tedious but also extremely dangerous making the position of brakeman one of the most dangerous within the industry at that time.

The purpose of the tell-tale was to warn the man, who was usually predisposed at the time and concentrating on the job at hand, that an impending obstacle was imminent down the line.

Thanks to the invention of the airbrake the practice was ended and so has the need for tell-tales.

Interestingly, however, many of the structures could still be found along railroad tracks for decades and even today you can still find a few here and there; a historical reminder of the early years of the industry and its dangers. 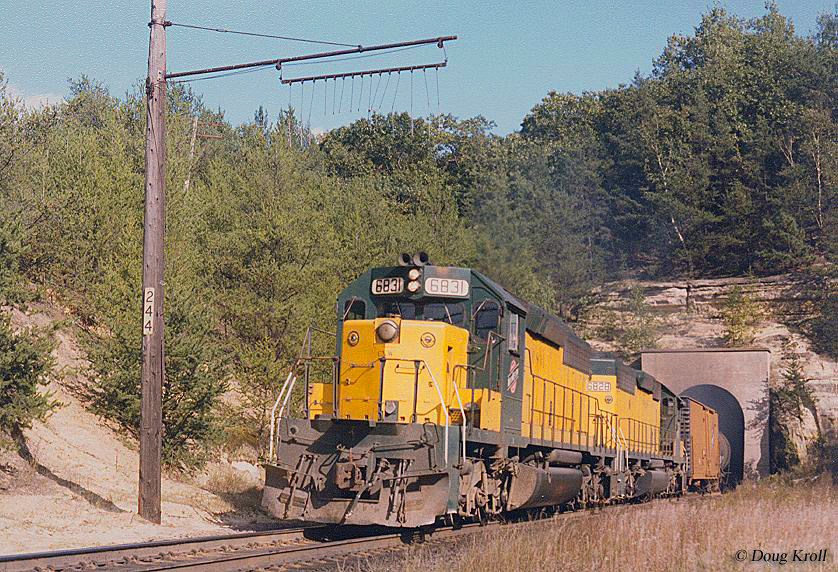 During the railroad industry's first four decades freight train operations were a rather haphazard affair.

Technologies at the time, aside from steam powered locomotives, were rudimentary at best; there was no automatic airbrakes, mechanical maintenance equipment, track circuits, or signals and radio and electronic devices were more than a century away.

Additionally, not even the now-classic automatic coupler had yet to be invented by Eli Janney, which came into practice during the late 1860s.

Instead, railroads were limited to the dangerous link-and-pin system to hook together two cars, which also led to many workers being maimed with missing fingers, hands, or arms (if not crushed-to-death altogether).

With this in mind, stopping a train was another laborious, dangerous, and difficult task.

For the most part the brakeman's job in stopping a passenger was relatively safe; it could be done by moving from car to car without the need to try and scale the roofs.

Additionally, a passenger consist traditionally includes many less cars.  However, a freight train was another matter altogether.

A car's braking system had to be set individually and the brake wheel was located on the roof so the brakeman was required to scale the roofs, normally while the train was either at-speed or at least in motion.

He worked via whistle signals from the engineer and to make the job even more dangerous often was forced to run or walk briskly to stop the train as quickly as possible.

Because of the time required to do this trains were often limited by the number of cars they could carry within a consist. 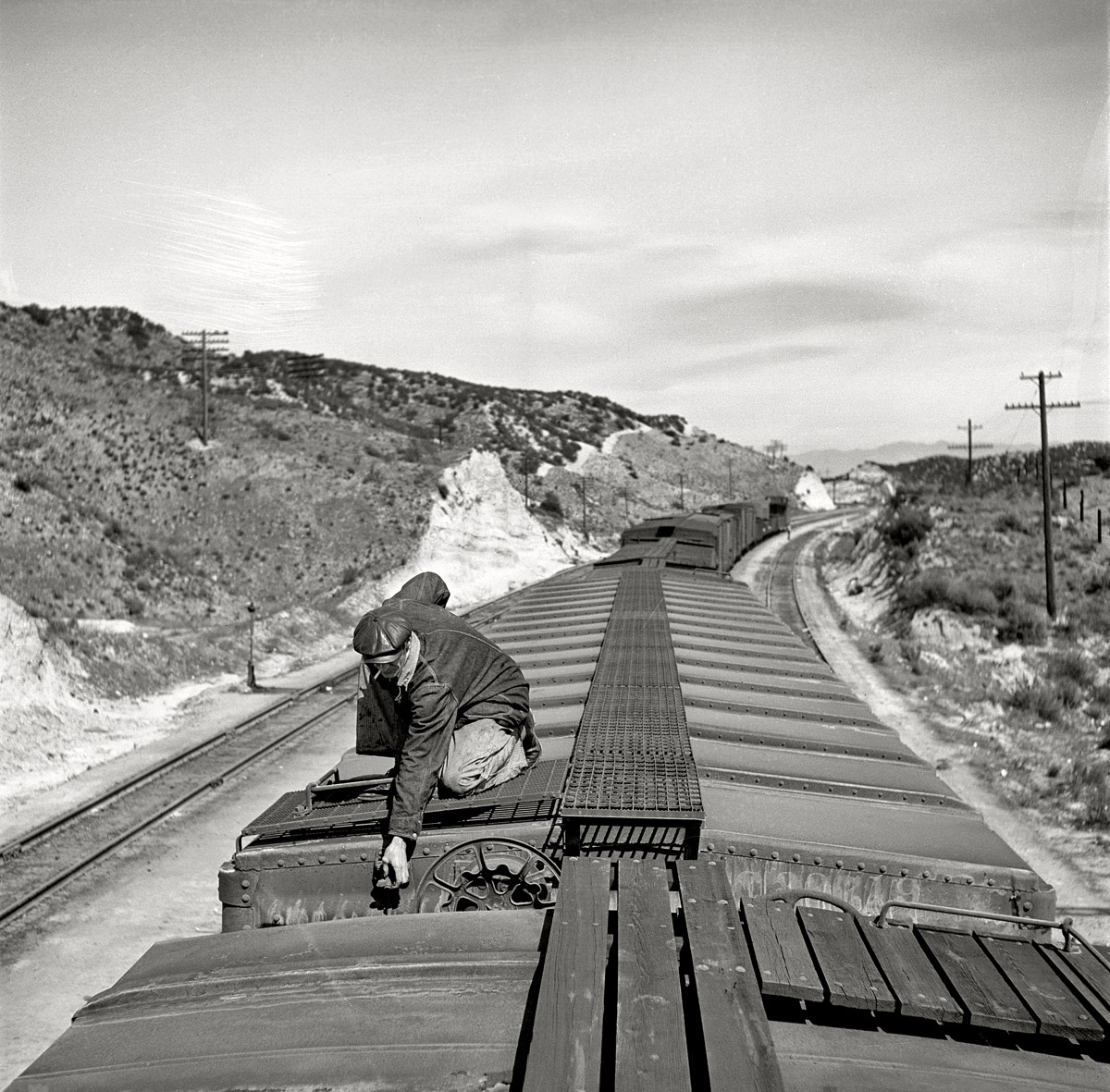 Before, and even after, the air brake was invented brakemen still had to navigate the catwalks of freight cars. Seen here is a Santa Fe brakeman opening the retainer valve along California's Cajon Pass during March of 1943. Jack Delano photo.

Unfortunately, this still did not reduce the number of accidents due to runaways as brakemen could either not apply the brakes fast enough or the rudimentary systems used at time were simply not enough to stop several tons of moving wood, steel, and freight within the time-frame needed.

During several of these runaway accidents the crewman was simply incapacitated and could not perform the task at hand due to either falling off the train or had been severely injured in some manner.

Not only did the railroad industry have few technologies available to improve safety or provide a more efficient service but there were also few safety protocols in place whatsoever.  One of the few available for the brakeman was the tell-tale.

This structure was once quite common along railroad tracks as it was used to warn the men that an impending low obstruction was ahead such as a tunnel entrance, water tower, signal, or bridge clearance.

Interestingly, however, a standard design for tell-tales was not put into place until 1926, more than 30 years after air-brakes became mandatory on all locomotives and cars.  At this time, according to Trains.com, a tell-tale was to be placed 100 to 300 feet away from the impending obstacle and standing at least 21 feet high to clear passing equipment.

Hanging from a single-track tell-tale, which was cantilevered, was rope so that a brakeman could easily be made aware of what was ahead if he was predisposed at the moment (rope, of course, was also a soft material to avoid injury when making contact). 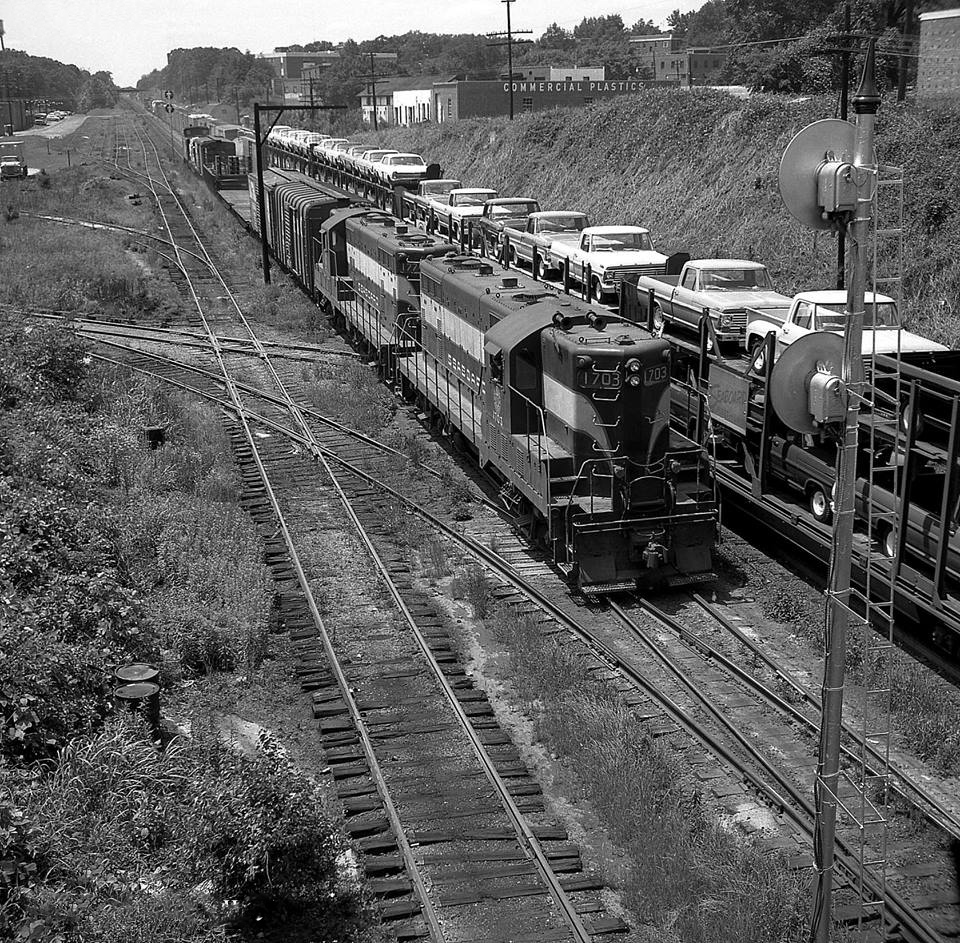 .A pair of Seaboard Air Line GP7's appear to be working local service as a freight passes by at busy Boylan Junction in Raleigh, North Carolina in the 1960s. Note the tell-tale, an overpass is directly ahead of the train where the photographer is standing. Warren Calloway photo.

Tell-tales were also placed across two or more tracks in which they looked similar to a signal bridge with ropes dangling below the support span.  In 1868 George Westinghouse invented the automatic air-brake system that is still commonly used today.

Not only did this device greatly improve efficiency by being able to stop a train much faster but it also no longer required brakeman to travel the tops of freight cars. 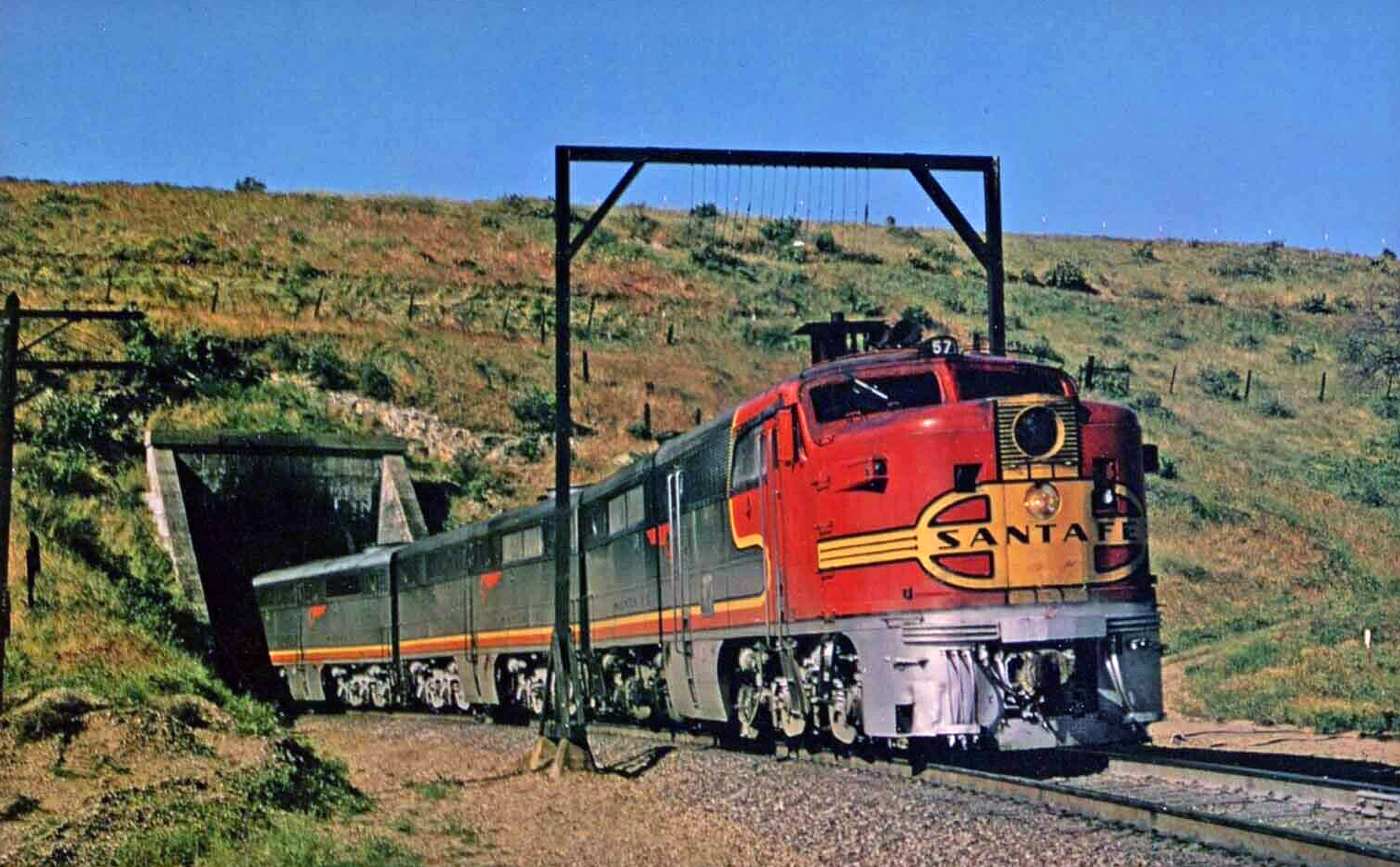 Additionally, trains could now be operated in much greater lengths which allowed for more freight (and profit) to be carried during a single run.

Finally, in 1893 the federal government required that air-brakes be made mandatory on all railroad equipment.  Interestingly, however, brakeman continued to walk the rooftops well into the 20th century until the practice was finally banned.

Today, even after more than a half-century since they fell out of use several tell-tales can still be seen along the tracks, a reminder of railroading's by-gone era.