The Chesapeake & Ohio became known over the years for operating successful, powerful, and efficient steam locomotives such as its fleet of 2-8-4 "Kanawhas," 2-6-6-6 "Alleghenies," 4-8-4 "Greenbriers," and others.

It was also a pioneer in the field introducing the new 4-8-2 wheel arrangement, dubbed the "Mountain" during the very early 20th century.

Used in passenger service on the C&O, interestingly, the company ultimately wound up with only a few models while other railroads rostered dozens.  Typical of C&O practice, its Mountains remained in service until the end of steam during the early 1950s.  No examples of these locomotives were ever preserved for posterity.

Its fleet of 4-8-2s were a fine batch of locomotives, particularly the USRA designed Heavy Mountains.  They sported Vanderbilt tenders, carried good lines, a long wheel base, and featured C&O's classic air pumps on the smoke box.  The C&O acquired five between December, 1918 and June, 1919. 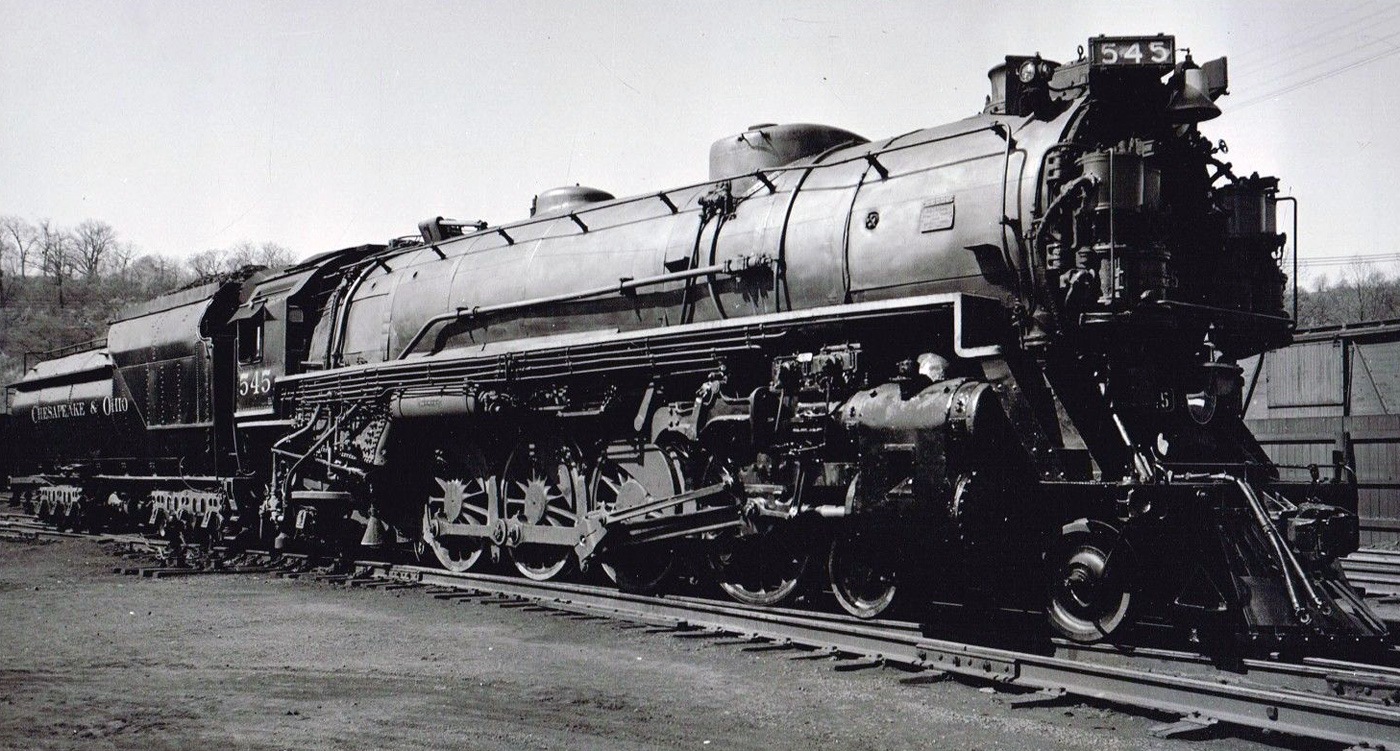 By the 20th century the Chesapeake & Ohio was in need of larger, more powerful steam locomotives to handle its passenger trains.  This was especially true with the introduction of all-steel, "heavyweight" cars, which were far heavier than the wooden/composite equipment that had always previously been used.

Until this time the C&O had relied on a combination of early wheel arrangements to get the job done such as 4-4-0s, 4-6-0s, and 2-8-0 Consolidations.

The C&O's original answer for new power included its Class F-15 4-6-2s, the first of which arrived in 1902.  During the succeeding two decades the railroad continued buying or upgrading its fleet of Pacifics, culminating with the famous and powerful Class F-19's manufactured in 1926 by the American Locomotive Company.

During those early years the C&O also experimented with even larger power, creating what became known as the 4-8-2 Mountain in 1911 (the name derived from a railroad subdivision and the Appalachian Mountains).

That year in June two arrived from Alco's Richmond Works, #316 and #317, and given Class J-1.  As C&O historian Karen Parker notes in her book, "Chesapeake & Ohio:  Heavy Pacific Locomotives," they showed incredible promise and were much more powerful than the F-15's and F-16's, swiftly moving long passenger consists over the stiff grades of the Allegheny and Mountain Subdivisions.

The locomotive enjoyed tractive efforts of 58,000 pounds; by comparison the F-15's and F-16's exerted only around 32,000 pounds of tractive effort.  However, as the C&O quickly discovered the 4-8-2's bore drawbacks. 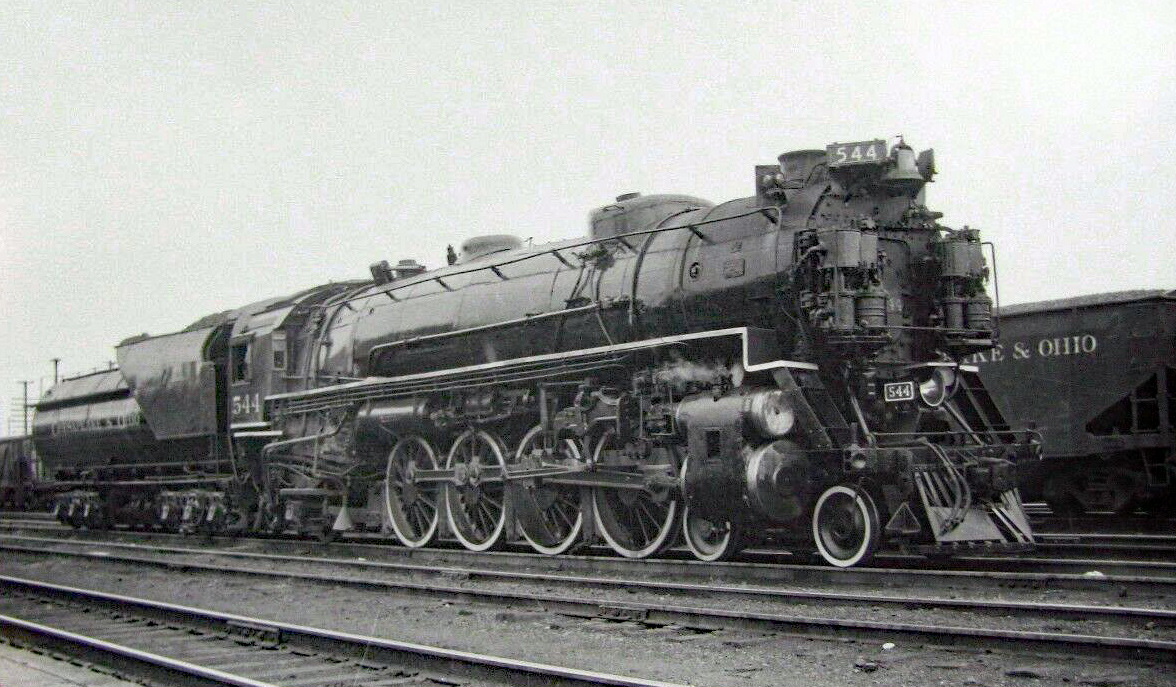 Chesapeake & Ohio 4-8-2 #544 at the road's major terminal in Huntington, West Virginia in a scene that likely dates to the 1950's. This locomotive was part of its J-2 class.

They sported only 62-inch drivers, rather small for a passenger locomotive, and in conjunction with long, heavy side-rods affording a rather jarring ride.

This issue also made the Mountains hard on the track and the C&O never followed up for more.  It would eventually rebuild the J-1's resolving many of its problems but in the meantime stuck with the Pacific wheel arrangement, taking delivery of its F-17's and F-18's during 1913 and 1914.

In terms of power the J-1's and J-2's weren't noticeably different although the USRA designs carried none of the inherent problems of their earlier counterparts.  During July of 1923 the C&O went back to Alco for two more (this time through the Richmond Works), proving as its final examples of this wheel arrangement.

They were numbered 138-139 and listed as Class J-2a.  Ms. Parker points at the "a" sub-classification denoted their use of Walschaerts valve gear while the J-2's sported Baker valve gear.

As the newer, heavier power  arrived (including newer 4-6-2s), older Pacifics and smaller designs were bumped from the main line and placed in secondary, branch line assignments around the system. By the 1920s the Mountains were handling most of the high priority passenger trains in the western mountain territory, aided by the newer Pacifics.

They remained primary power here until displaced by "Super Power" technology following the arrival of the superb 4-8-4 "Greenbriers" in 1935 (more came during the 1940s).

During World War II the J-1's were requisitioned for freight service, almost surely the result of their low drivers.  C&O historian Eugene Huddleston notes that after their issues were corrected the J-1's served many years on the mountain divisions as their low drivers provided good tractive effort while their large boilers offered ample quantities of steam. 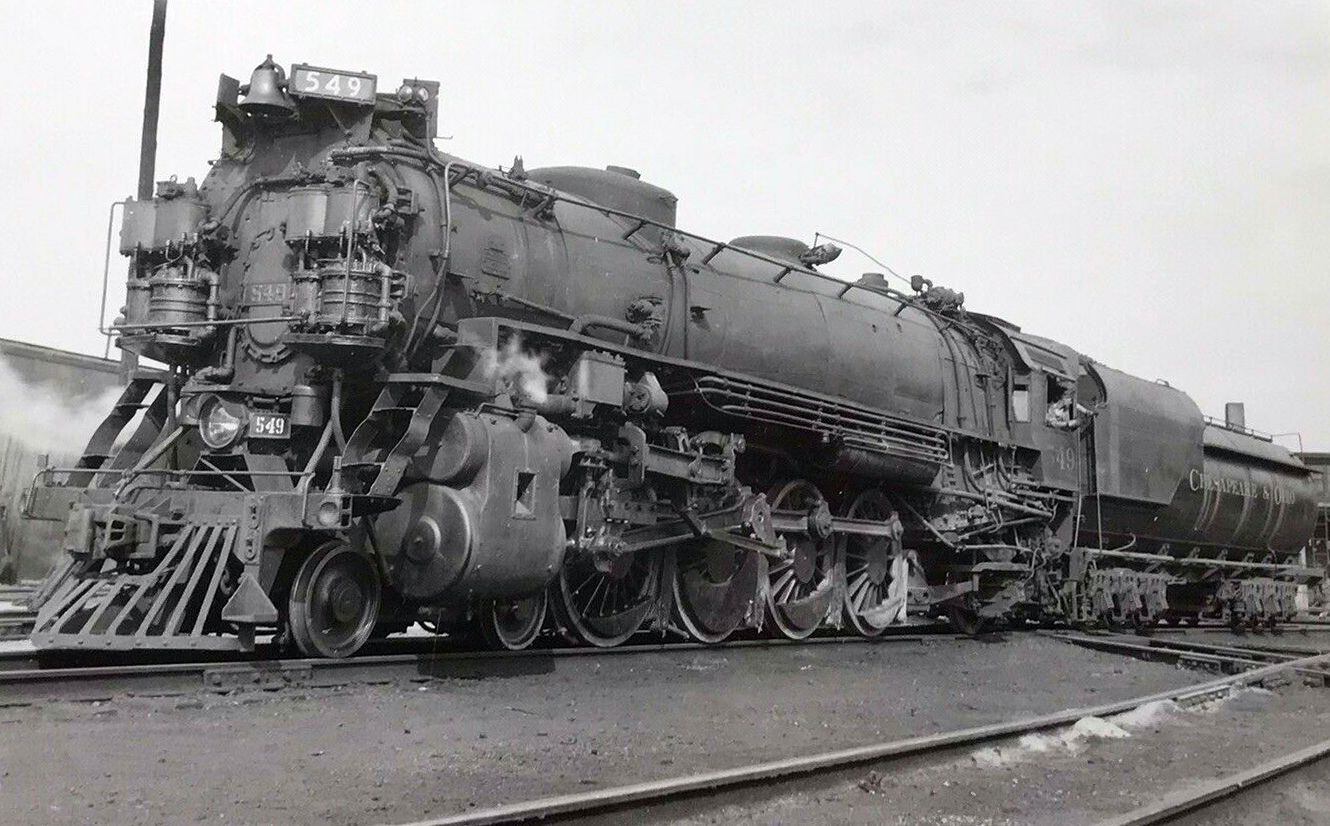 The J-1's, returning to passenger assignments after the war for a few years and were finally retired in the late 1940s. During the 1930s the J-2's also received an overhaul when C&O shop forces rebuilt them with new cabs, Vanderbilt tenders, feedwater heaters, and the classic "flying pumps" on the smokebox.

Both the flying pumps and feedwater heaters became a telltale, common feature on many of the C&O's late-era steam locomotives giving them a very robust, almost intimidating appearance.

The J-2's survived only a bit longer than their older cousins, remaining in service until 1952 when they, too, were retired.  The Chesapeake & Ohio of that era carried a long-standing tradition of preserving steam but alas none of the ten Mountains were ever saved.