During the end steam's reign a new technology arose that attempted to provide one final, competitive edge against the diesel; steam turbines.   These locomotives were somewhat similar to diesels in that an electric traction motor was used to provide power although instead of a diesel engine, turbines were used.  A few railroads experimented with the concept, one of which was the Chesapeake & Ohio.  Interestingly, the C&O's application was somewhat unique; it intended to use the turbines in high-speed passenger service via a new streamliner known as the Chessie.  Alas, the train never made it into service and the M-1's were never reliable; numerous mechanical problems saw them scrapped only a few years after being built.

One of Chesapeake & Ohio's M-1 steam turbines, #500, is seen here on display at the Chicago Railroad Fair in 1948. Intended to handle the never-launched streamliner "Chessie" all three turbines proved problematic and were scrapped in 1950. Author's collection.

Following the introduction of Electro-Motive's revolutionary FT diesel-electric locomotive in 1939 it was clear the motive power was the future.  However, some railroads still believed strongly in steam power including the C&O and Norfolk & Western.  These two lines derived a large percentage of their freight revenues from the movement of Southern Appalachian coal; as a result they maintained a strong allegiance to steam through the 1950s.  Around the time of World War II the steam turbine was born and appeared as if it might challenge the diesel.

A  History Of Steam Turbine Technology

The first to test the technology was Union Pacific in 1938, using a streamlined pair for passenger service, followed by the Pennsylvania in 1944.  Then, just after the war, the C&O jumped on the bandwagon.  Under the new leadership of Robert Young since 1942, who believed fervently in high quality and efficient passenger service, the C&O wished to use steam turbines on a new service between Washington, D.C. and Cincinnati, Ohio.  The train, named the Chessie, was boasted by Young as the most luxurious all-coach service in the country.  To further enhance its appeal, and keep in accordance with the C&O's coal roots, Young felt steam turbine locomotives should power the Chessie. 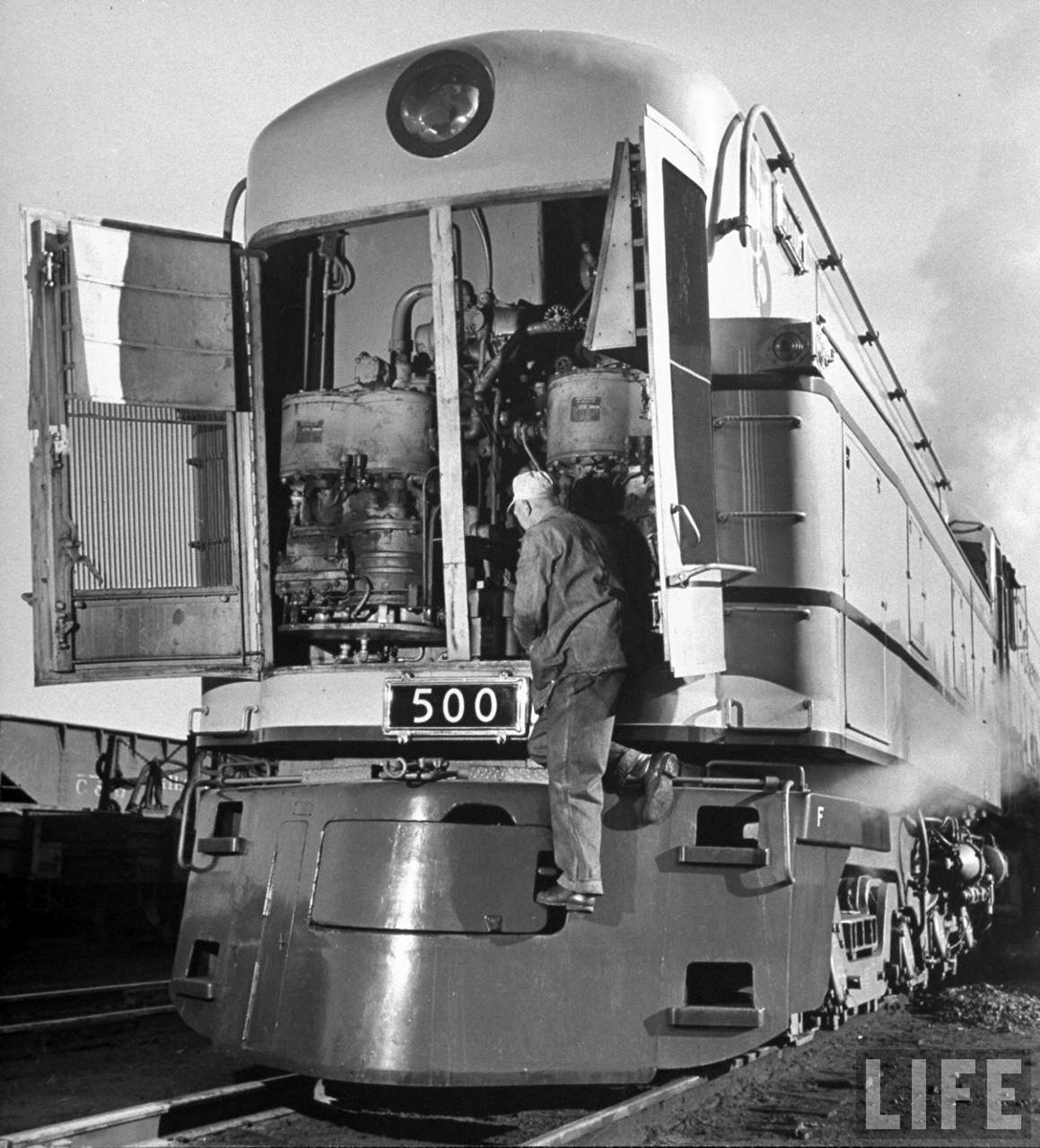 The following photos were a series of publicity scenes featured in Life Magazine at the time.

According to Thomas Dixon, Jr.'s book, "Chesapeake & Ohio Railway:  A Concise History And Fact Book," the Class M-1's worked by employing a standard boiler, fed by coal, to power electrified traction motors on the axles thus propelling the locomotive forward.  In essence the M-1 was a combination steam and diesel locomotive using a boiler and traction motors but lacking a diesel engine.   Departing from traditional steam designs the M-1's boiler was situated to the rear while a coal tender, streamlined as part of the entire locomotive, was located ahead of the cab which more or less sat in the middle of the entire contraption.  In any event, the design was mechanically complex and during initial tests in 1947 the #500 experienced a variety of problems. 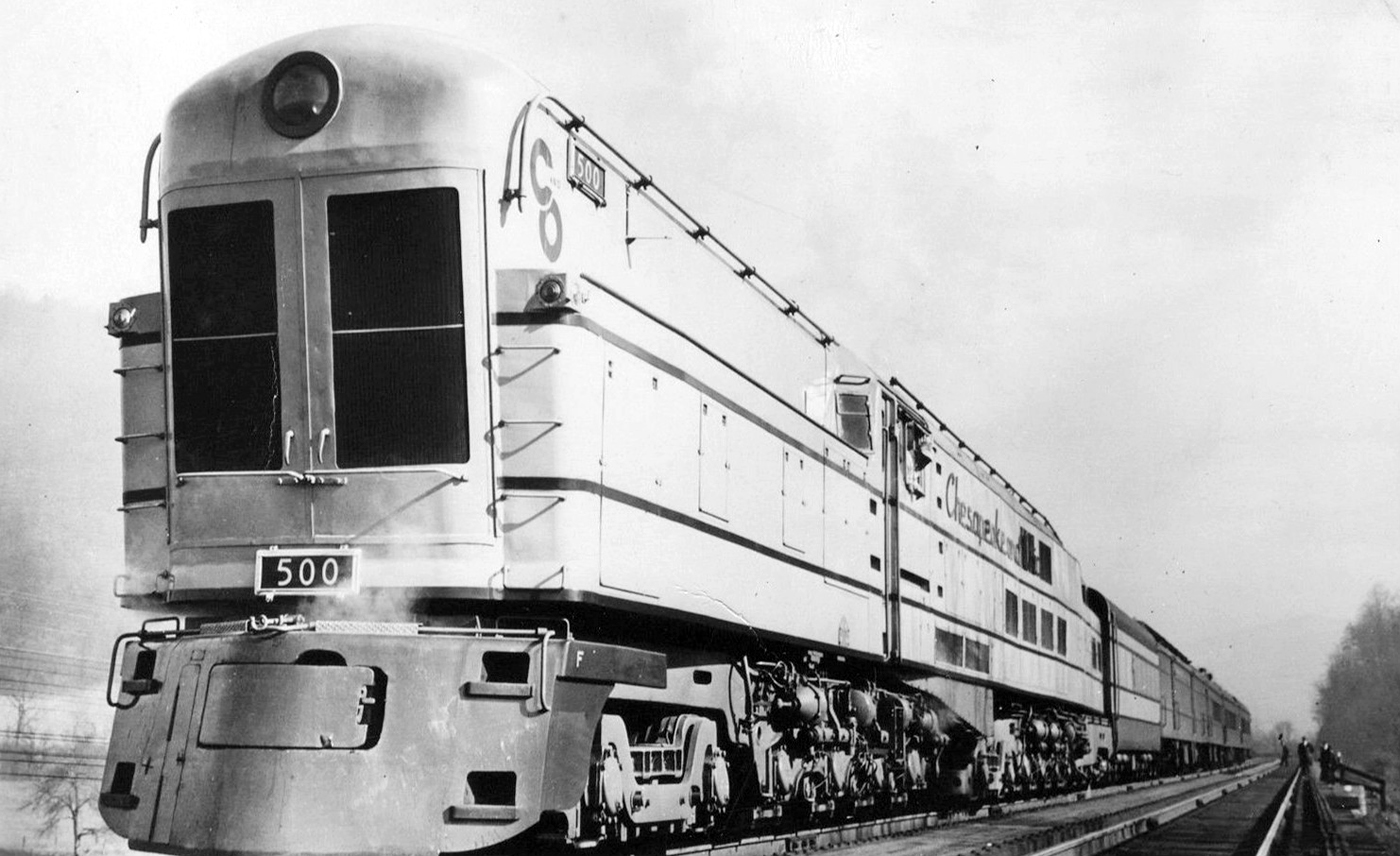 Part of the issue was the turbines themselves which, while practical in marine applications, could not tolerate the jarring actions and heavy beating experienced during standard service on a railroad.  There was also the problem of dirt, dust, and other particles fouling equipment, including the traction motors.  Despite claims by its builders that the M-1 would require less maintenance via fewer moving parts and greater fuel savings the C&O was never able to operate the locomotives all the way from Washington to Cincinnati without some sort of mechanical troubles.

In 1948 the M-1's promoted the new Chessie by parading an exhibition train around the entire C&O system, allowing folks to tour the equipment during stops at various towns and cities.  Unfortunately, the train never ran despite all of the cars and locomotives being purchased and readied for service.  Young had wanted the Chessie running by 1946 but a large backlog of postwar orders delayed the cars from arriving for two years at which point steeply declining ridership essentially forced the C&O to end the idea.  The cars later went to operate on the regional Pere Marquettes for a few years while the unsuccessful M-1's continued to run on other trains during 1948.  The three units were eventually sent back to Baldwin and scrapped in 1950. 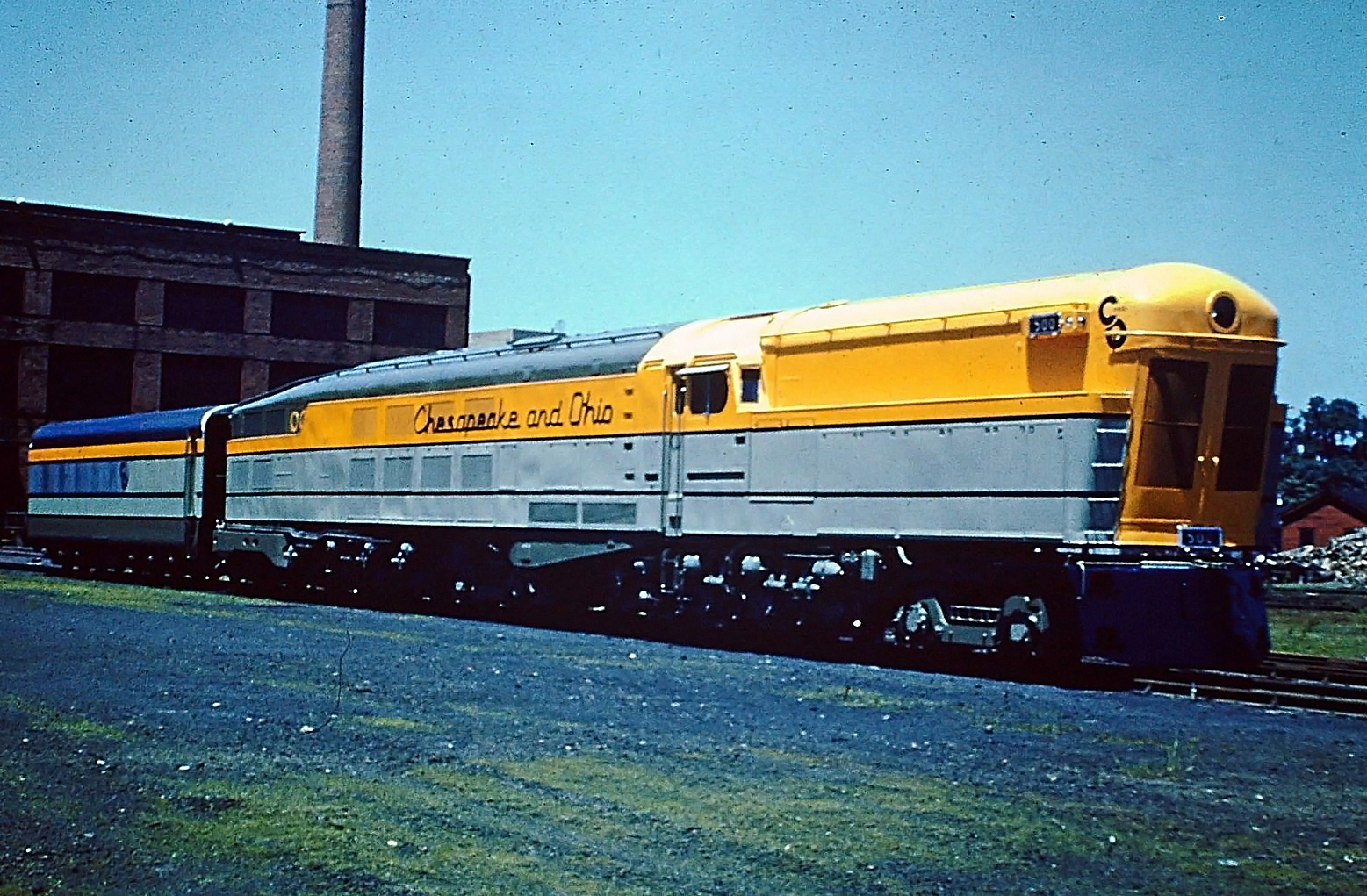 One of Chesapeake & Ohio's Class M-1 steam turbine's, #500, is seen here in May, 1948. The locomotive, along with two others, was built to handle the railroad's postwar streamliner, "The Chessie," which ultimately never entered service.

Perhaps the failure of the M-1's and the Chessie was all of the best.  While the C&O was struggling to get the train in service rival Baltimore & Ohio launched a new streamliner along the same corridor during January of 1947 known as the Cincinnatian.  It featured a stunningly beautiful streamlined 4-6-2 Pacific with matching equipment in a deep blue, silver,and white livery.  Alas, the market was so sparsely populated the train saw little success and the B&O soon shifted the train to a Cincinnati - Detroit routing where it saw much higher ridership.