- Please note!  The American Orient Express was discontinued in 2008.  The information presented here is a brief historical record of the train including routes, cost, and its typical consist. -

The American Orient Express (AOE) was a privately-owned, ultra-luxurious passenger train which operated in conjunction with Amtrak from 1994 until 2008.  Its lineage can be traced back to the American-European Express (AEE), a short-lived experience hosted from 1989 until 1991.

Despite the expense, the AEO did prove successful for a time by offering lavish accommodations and incredibly scenic views (particularly of the western United States).  While the train's persona gave it a California Zephyr appeal, its inspiration came from Switzerland.

In his article, "Cruisin' On The AOE: Finally, a modern-era luxury train in the United States has gotten it right," from the February, 2000 issue of Trains Magazine, author Karl Zimmerann notes it was the most opulent American passenger train since the Atchison, Topeka & Santa Fe's de-Luxe of 1911 (a seasonal winter train linking Chicago with Los Angeles).

When the 2007 recession hit an already struggling AOE was discontinued the following year.   Unfortunately, the high cost of operating these land-based cruises made profit-margins slim, an issue private railroads had recognized decades earlier.  The information here offers a brief history of this unique operation. 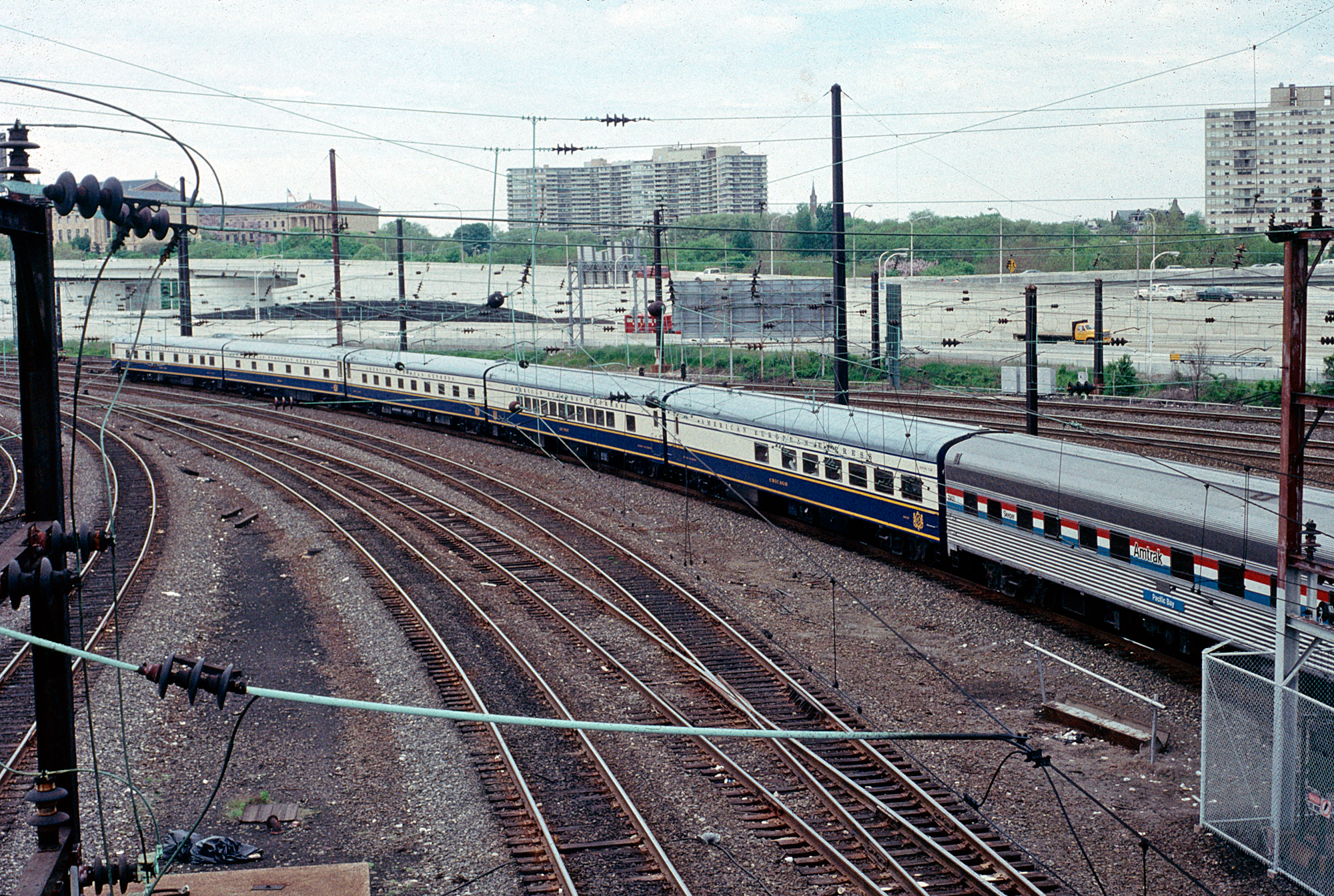 Most freight railroads got out of the passenger business in 1971 thanks to federal legislation which created the National Railroad Passenger Corporation (Amtrak).  Many would have exited the business even years earlier if allowed to do so.

The post-World War II era was difficult on the industry as the public abandoned trains for automobiles; when the Federal-Aid Highway Act became law in 1956, creating a 41,000-mile network of cross-country Interstates, along with the ever-expanding airline industry, the long-distance passenger train was effectively killed off.

During the 1980's and 1990's, various attempts were made to revive first-class rail travel with the goal of providing accommodations once found on famous trains like the 20th Century Limited, Broadway Limited, Super Chief, Empire Builder, and California Zephyr.  Some were marketed as tourist attractions while others as vacation/travel experiences.

In every case the trains failed to earn a sufficient return on investment; many went defunct after just a few years. Even Amtrak entered the market briefly, but soon gave up.  Despite thin to nonexistent profit margins, the allure and romance of passenger rail travel persists even today.

The American-European Express (AEE) was supposed to be different.  It got its start thanks to Alby Glatt of Switzerland, who successfully launched dinner/tourist trains in his home country in 1972.  What was known as the Nostalgie Istanbul Orient Express (NIOE) began running in 1972 and operated through parts of Russia and Asia.

He believed a similar service could be successful in the United States if properly marketed and managed.  In 1986, those leading NIOE got in touch with William Spann who managed the Bay Point Yacht & Country Club in Panama City, Florida about collaborating on just such a venture.

The idea moved forward surprisingly quickly as several investors were found.  Next, a series of lightweight, streamlined cars (11 in all) built during the last great "Silver Age" of rail travel were purchased.

Once these were overhauled, a lavish new first-class train was inaugurated on November 15, 1989 known as the American-European Express.

It would run on a six-night schedule between Chicago and Washington, D.C.  The group's immediate mistake was partially marketing the train to business travelers, who found the steep costs ridiculous when air travel took only a fraction of the time and at a fraction of the cost.  There was also little scenery afforded along the route. 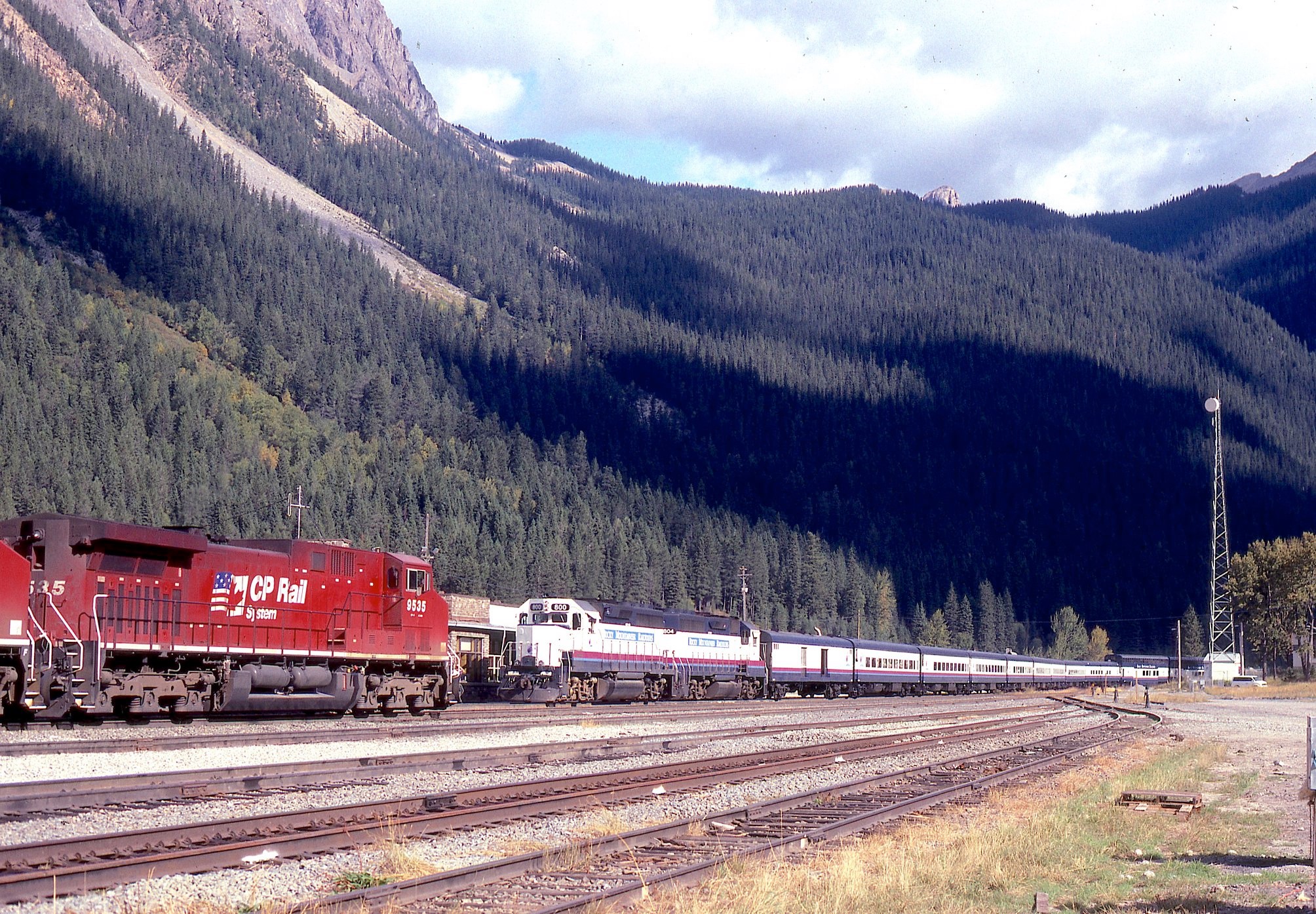 In November, 1990 the AEE was discontinued. Surprisingly, it was resurrected on March 1, 1991 boasting a more scenic route between New York and Chicago via West Virginia's New River Gorge over the former Chesapeake & Ohio main line.

The new marketing plan also shifted away from business clientele in favor of tourists.  This version of the AEE enjoyed slightly more success but was again forced to shut down in October, 1991 due to disappointing ridership.

As the equipment remained in limbo (The AEE owned no locomotives.  It first leased a pair of F7A's from CSX Transportation, originally built for the Clinchfield, and used on the Class I's business train.  Later, GP40's were leased.  In both cases, the units were adorned in full AEE colors to present an all-matching consist.) the idea of first-class rail travel was reexamined.

This time it was marketed elusively as a tourist attraction with three key points to entice the public; breathtaking scenery, primarily western routes for maximum vistas, and exquisite service and accommodations.

The brainchild behind this latest endeavor was George Pierce, a successful businessman who had experience in the tourist train arena having been involved in the Texas Dinner Train, which ran over the Southern Pacific between San Antonio and Hondo, Texas until 1991. 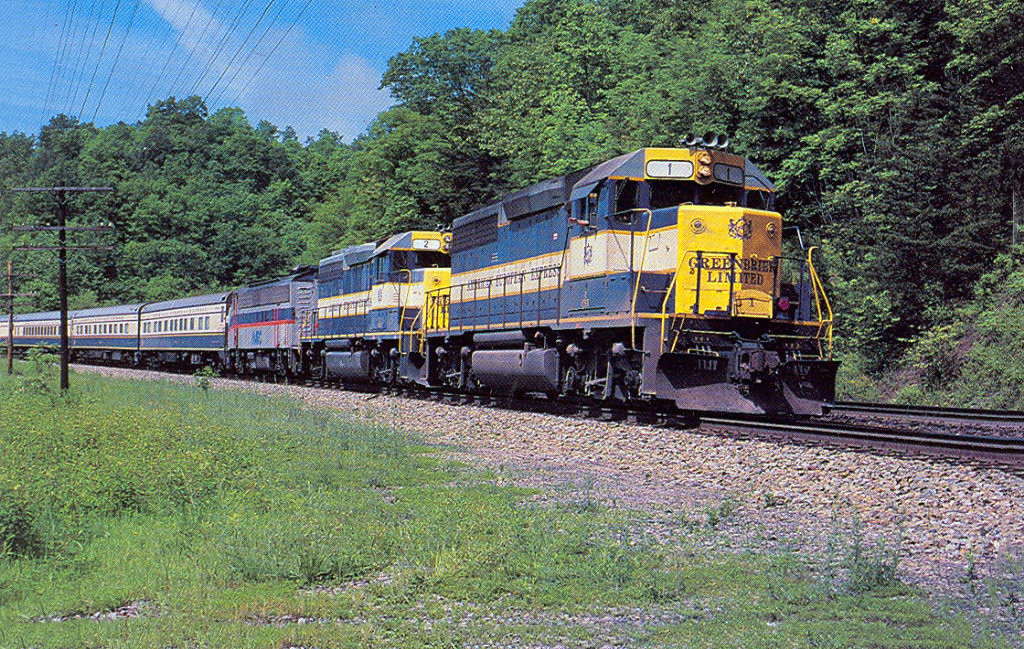 The new train would be called the American Orient Express and made twelve trial trips in 1994; beginning in August excursions under the name Branson Limited were operated in conjunction with Amtrak (nine in total between Branson, Missouri and Newport, Arkansas) while three more were hosted from San Antonio to New Orleans.

Aside from the name change, the cars were virtually the same as those originally rebuilt by Kasten Railcar of St. Louis and Northern Rail Car Company of Milwaukee for the American-European Express (interiors were the work of Bay Point Interiors of Panama City, Florida).

Both the AEE and AEO were beautiful inside and out boasting lounge service, bedrooms/suites, domes, and five-star dining.  The cars were adorned in a handsome cream and blue livery with gold pinstriping.

From 1994 until 1997 the American Orient Express was a joint venture of Pierce's Trans Texas Rail, Inc. and Reiseburo Mittelthurgau, a Switzerland-based enterprise then operating the Nostalgie Istanbul Orient Express.  In 1996 the AEO hosted five transcontinental excursions when a new owner entered the mix, TCS Expeditions of Seattle.

In 1997 it took over all operations (with equipment then still owned by Reiseburo Mittelthurgau), expanding its schedule and offerings of what it called the "cruise train."

*      Sold to Seaboard Coast Line in 1970 as #6110, then became Amtrak #2242.  Acquired by John Kirkwood, one-time AEO director, and named Bella Vista featuring a 9-bedroom/lounge layout where it was leased to American Orient Express.  Finally, was sold to AEO where it became the Portland.

**     Became Norfolk & Western #150, sold to Amtrak where it became #3253 and a 5-double bedroom sleeper.   Acquired by John Kirkwood, one-time AEO director, and named Montecito; leased to both the American-European Express and American Orient Express.  Finally, was sold to AEO where it became the San Francisco featuring a 2-Presidential Suite/2-Single Bedrooms/Crew Lounge/Kitchen configuration. 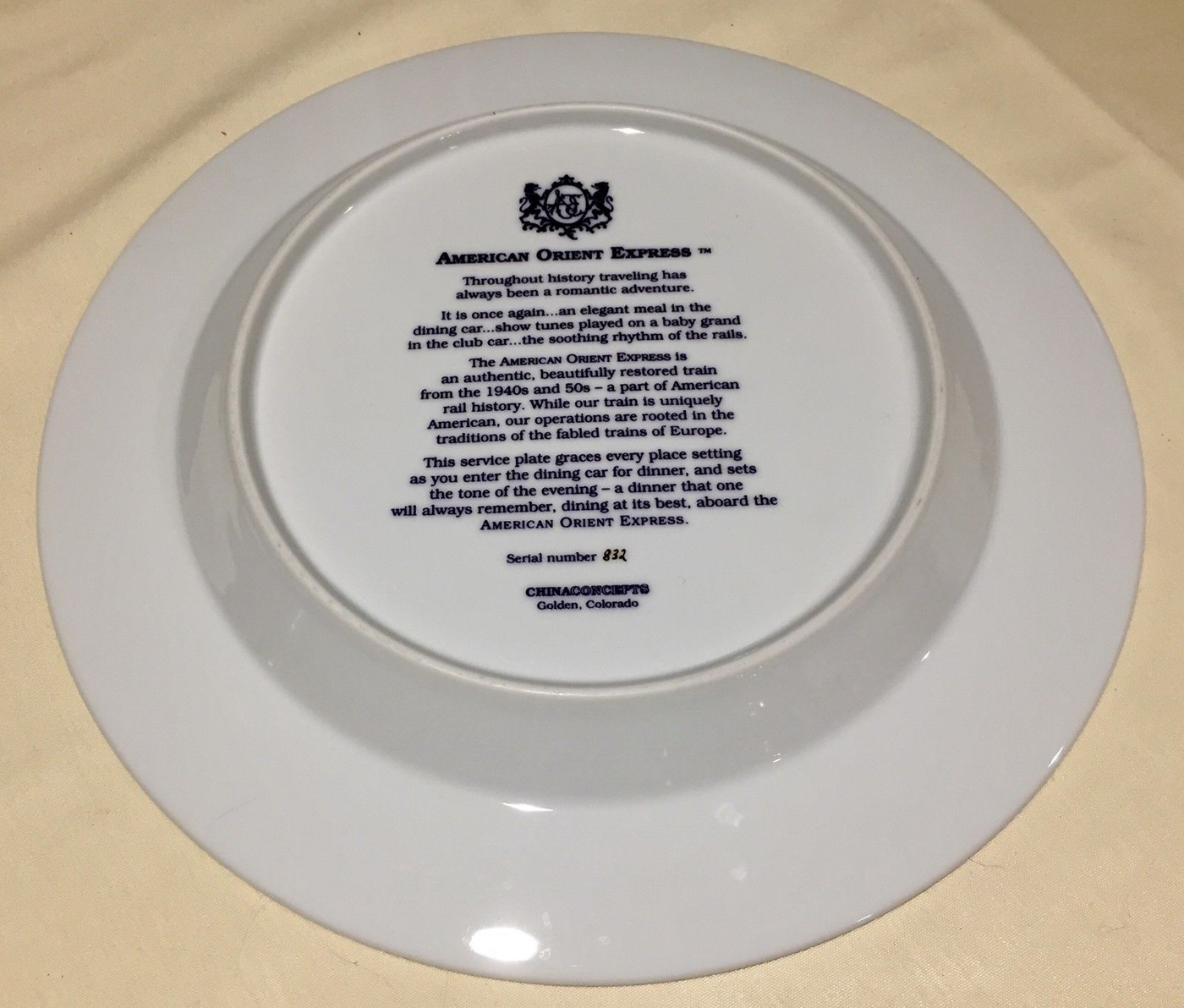 Interestingly, that same year yet another ownership change occurred when Henry Hillman took over and purchased the equipment from Reiseburo Mittelthurgau.

He expanded the cruise train concept, which functioned and acted like accommodations afforded on a cruise ship with unparalleled accommodations and breathtaking scenery.  Hillman further expanded on this by offering overnight stays off-train and even rail/cruise ship packages.

He also added more cars, such as Great Northern/Northern Pacific domes, Union Pacific domes, and a former Amtrak buffet-lounge (among others).  Finally, the train came equipped with porters and a full staff to meet customers' every need.  Trips aboard the American Orient Express lasted anywhere from 5 to 10 days.

Hillman stated in his 2000 interview with Mr. Zimmermann, "It's running beautifully, generally at full occupancy.  We'll continue to refine the operation, but I don't see any major changes."   As that decade continued, a major change took place in 2006 when Colorado Rail Car Manufacturing acquired the train. 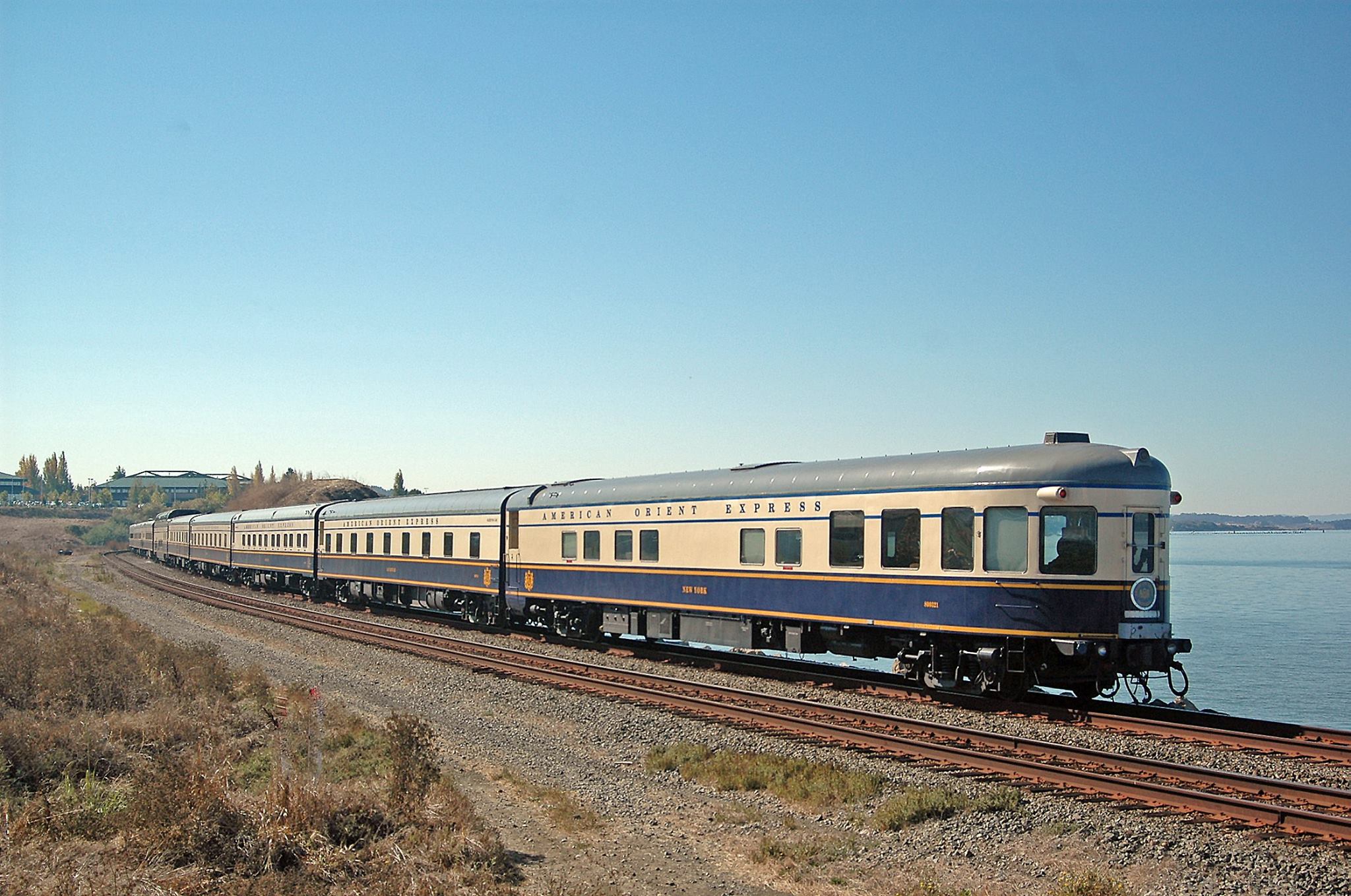 It was subsequently renamed as GrandLuxe Rail Journeys with Tom Rader as CEO.  Unfortunately, the train's exorbitant ticket price, coupled with the economic recession of 2007, led to its demise.

The market was simply strong enough to sustain this business model; the trade publication Travel Weekly noted in an August 27, 2008 article, the average ticket price for a 10-day experience through the western national parks was $5,470 per person.

For most, such costs were simply not feasible despite the opulent accommodations.  Rader stated the train's final trip would occur on August 28, 2008 when it returned to Tacoma, Washington.

This coincided with Grand Luxe's own financial problems; the company had been founded in 1988 by Rader as "Rader Railcar," a manufacturer of passenger train equipment.  It was subsequently renamed Colorado Railcar in November, 1997.  For a time it was a popular builder of single-level, dome cars which provided maximum viewing via large, glass solariums running the car's length.

They also built DMU's (diesel multiple unit) on the same concept. Alas, with clientele predominantly consisting of either tourist railroads or public agencies, sales were limited.  Colorado Railcar closed in 2008 and its assets became today's US Railcar.