The Chesapeake & Ohio's roster of what it referred to as the Class T-1 included a fleet of forty 2-10-4 "Texas" types, which entered service just after the country entered the Great Depression.  The success of these locomotives ahead of heavy freights sold the C&O on "Super Power" steam designs.

What was essentially an enlarged Berkshire, the 2-10-4's could handle well over 100-car trains in the rugged western territory with an ability to cruise at-speed.

Following the arrival of the Texas virtually all future steam locomotives the railroad purchased were of the "Super Power" variety including such wheel arrangements as the 4-6-4, 4-8-4, and of course the 2-8-4 "Kanawhas."  Today, no examples of these historic locomotives are preserved.

The C&O used a wide variety of wheel arrangements, from the massive 2-6-6-6 "Allegheny" to the small 2-8-0.  These locomotives could be found in service until the end of steam.  Chessie also employed big steam for fast freight operations, such as the 2-8-4 and the 2-10-4.  These locomotive could high-step their way at over 30 mph lugging heavy coal drags or merchandise trains in C&O's flatter territory, such as in the scene below. 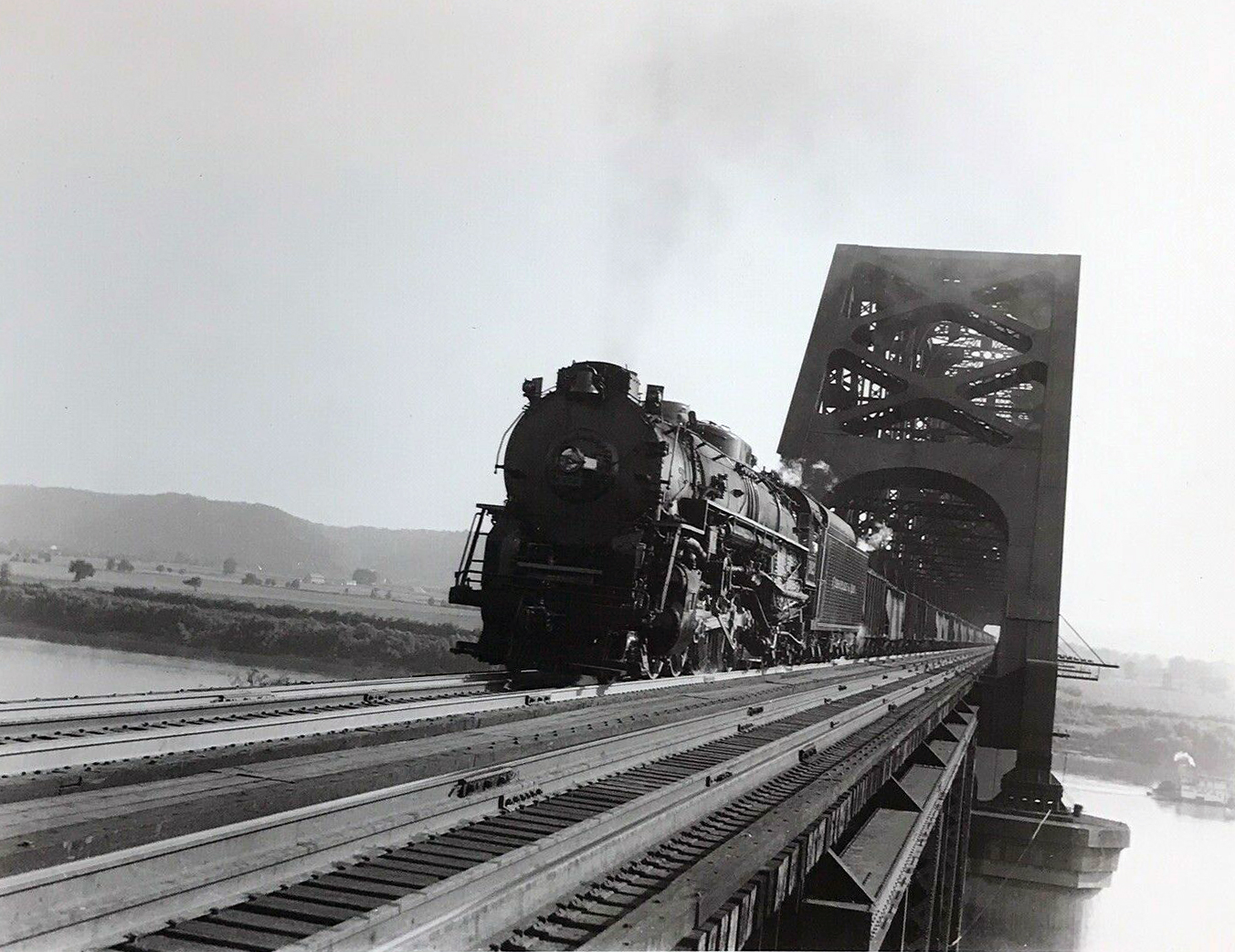 In this Chesapeake & Ohio publicity photo 2-10-4 #3023 (T-1) has just left the Chicago main line as it hustles westbound/northbound across the Sciotoville Bridge spanning the mighty Ohio River with loads of coal destined for Columbus and Toledo in 1943.

The Texas Types introduced the Chesapeake & Ohio to the age of "Super Power" steam and was the first for which the Advisory Mechanical Committee (AMC) took credit designing.  The AMC was an oversight body formed shortly after the Van Sweringen brothers gained control of the C&O in 1923.

Its purpose was to improve and standardize, among other initiatives, motive power across the Van Sweringen-owned railroads which included (aside from the C&O) the  Erie, Nickel Plate Road, Pere Marquette and Hocking Valley Railway (the latter two acquired by the C&O).

According to C&O historian Tom Dixon the AMC, in addition to its research and development department, more or less held authority over mechanical decisions for each railroad.

The 2-10-4 was spawned from the AMC's original interest in Super Power technology.  This term chronicles late era steam locomotives which featured large, expanded fireboxes (requiring two trailing axles) able to produce near infinite quantities of steam to the cylinders.

In addition, it has been used to describe technologies which began appearing on new designs in the 1920s such as roller-bearings, mechanical stokers, and outside valve gear.

The C&O's 2-10-4's were born from the 2-8-4 Berkshire (known as "Kanawhas" on the railroad), the original Super Power wheel arrangement, developed and tested on New York Central's Boston & Albany subsidiary in northwestern Massachusetts during the spring of 1925. 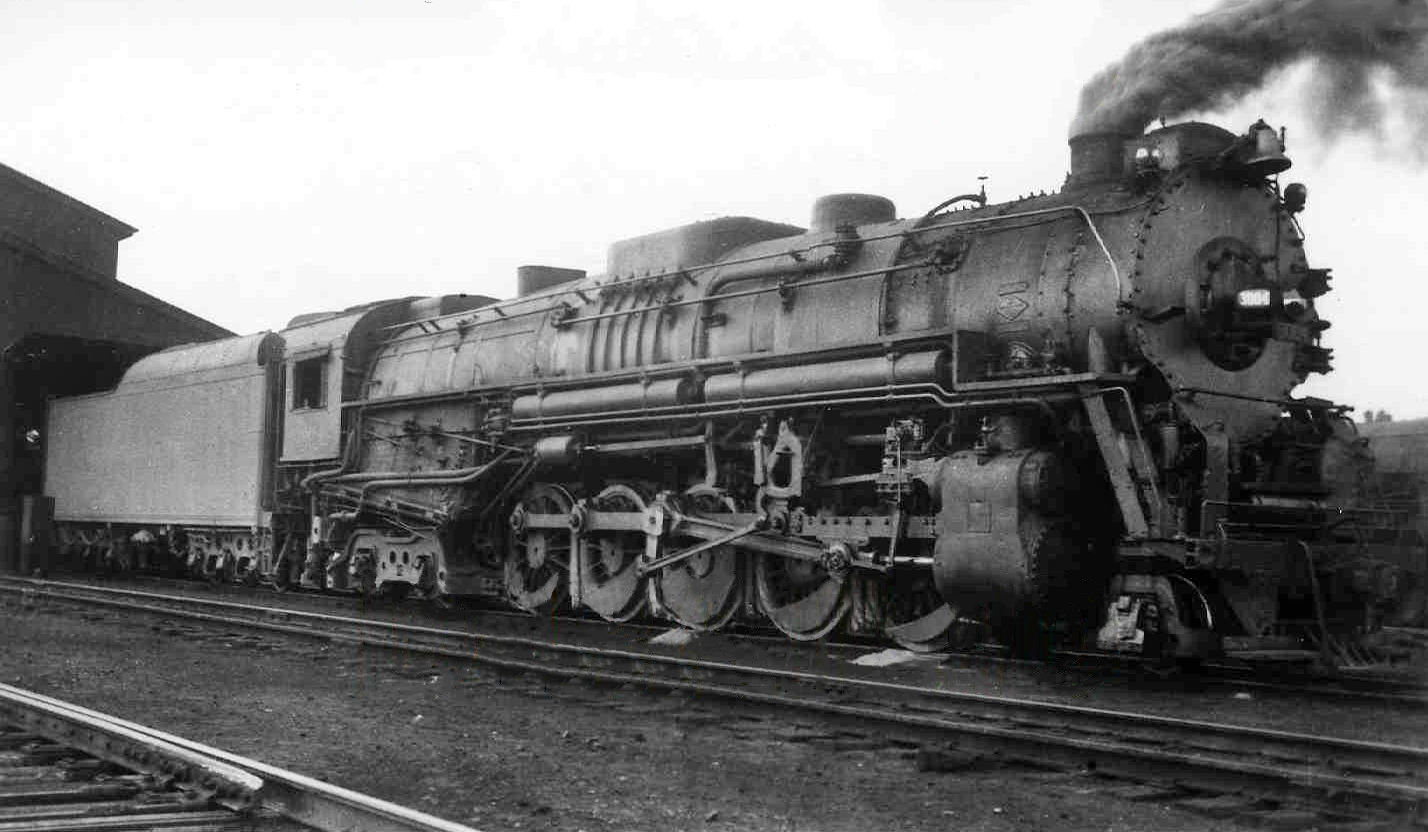 It appears the Van Sweringens' were quick to recognize the inherent advantages of the new 2-8-4 and impressed with Lima Locomotive Works' "Super Power" design.

As Mr. Dixon points out in his book, "Chesapeake & Ohio K-4 Class 2-8-4 Steam Locomotives," only a few years later the Advisory Mechanical Committee was formed in 1929.

Over the next two decades the AMC refined a range of powerful new locomotives, perhaps the most best remembered of which were the so-called 2-8-4 "Van Sweringen Berkshires" found in service on all of their railroads.  The C&O's 2-10-4's rolled out within a year of the committee's formation, working with Lima in doing so.

By creating the C&O's Class T-1's, AMC and Lima based the design from Erie's successful Class S 2-8-4's (totaling 105 units they were manufactured by all three major builders between 1927-1929 and continuing moving freight until 1957), essentially stretching the locomotive by adding an additional driving axle (the very first 2-10-4s appeared on the Santa Fe in 1919). Both the railroad and its employees were very impressed with the 2-10-4's.  As C&O historian Eugene L. Huddleston notes, "This was truly one of the greatest locomotives ever built." In his book, "Chesapeake & Ohio Railway:  A Concise History And Fact Book," Mr. Dixon points out that the T-1's were the largest and most powerful non-articulated locomotives ever manufactured when they first entered service in 1930.

The C&O normally assigned them west of the Ohio River where they found themselves working between Russell, Kentucky and Toledo, Ohio via Columbus largely handling 14,000-ton, 160-car coal drags to the docks along Lake Erie and other points across Ohio.

Sometimes they would also venture east but this was rare.  The T-1's operated without major changes or upgrades throughout most of their careers although they did see an increase in boiler pressure to 265 psi, witnessing a slight increase in tractive effort. The locomotives were not particularly old by any standards when their retirement came in 1952-1953.  As a major shipper of coal the C&O was a staunch proponent of steam power, so much so that it continued acquiring new locomotives through the late 1940s.

It also took the bold step of testing experimental steam-turbine technology, which ultimately proved unsuccessful.  As the secondary steam market faded away during the 1950s the C&O realized diesels were here to stay as main line motive power and began the process or retiring its steam fleet.  While the company preserved many examples of various wheel arrangements none of the 2-10-4's were ever saved.