The Budd Company, founded by Edward Budd in 1912, has its roots and history in the automotive industry building car bodies and body components, and even today the company continues to build and manufacture such.

However, for roughly a 50-year period beginning in the early-1930s Budd broke into the railroad industry manufacturing passenger cars and giving Pullman-Standard serious competition.

While the company dabbled with experimental designs in the first few years of the 1930s, Budd's initial success in railroading was its Zephyr 9900 (also known as the Pioneer Zephyr) trainset which had a public unveiling at the Pennsylvania Railroad's Broad Street Station in Philadelphia in the spring of 1934.

The train itself was owned by the Chicago, Burlington & Quincy Railroad and featured Budd's trademarked stainless-steel, ribbed design. 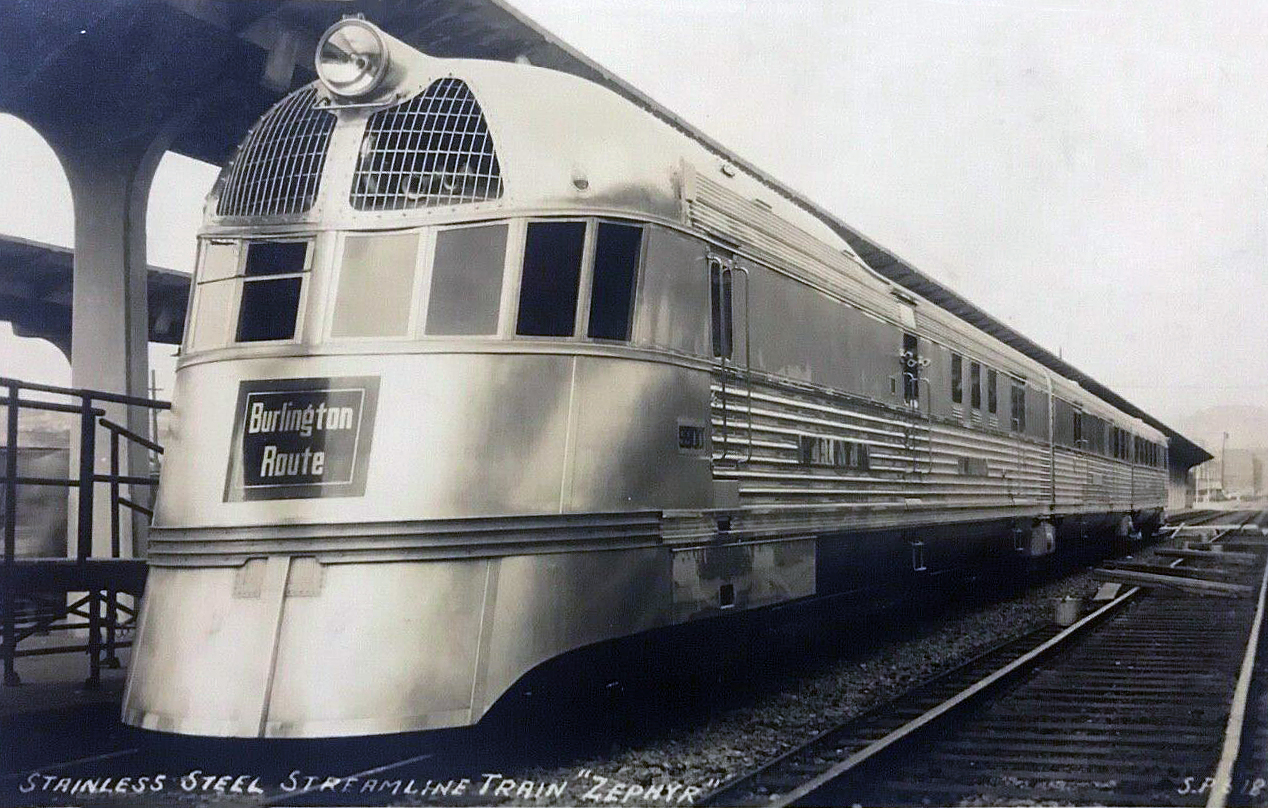 It was this train, Burlington's "Zephyr 9900" ("Pioneer Zephyr") which allowed the Budd Company to prosper throughout the streamliner era. The gleaming stainless steel, a patented company design, made the train appear as if it was moving even when it wasn't. This photo appears to have been taken at Denver Union Station in May, 1934 shortly before the trainset made its record-breaking run to Chicago.

Budd's final decade is unfortunate; the company, like Pullman, manufactured the highest quality passenger cars available anywhere in the world.

With a dying market, and during an era before government agencies began purchasing equipment, there was simply no customers available to remain profitable.

However, many Budd cars are restored today, the property of tourist lines, museums, and even private individuals.

While the Union Pacific's M-10000 is credited with being the first streamliner to debut (in early 1934) the Budd-built Pioneer Zephyr is often best remembered.

Much of its celebrity and endearing status is the result of its historic run on May 26, 1934. On this day the blazing-fast train left Denver in the morning and arrived in Chicago, covering 1,015 miles in just 13 hours and 5 minutes!

Aside from the train's incredible speed, however, was its dazzling design. Budd's patented ribbed stainless-steel design gleamed, and gave the appearance of speed even when the train wasn't moving.

However, outside of the Zephyr trainsets Budd designed the company mostly focused on passenger car equipment (although it would go on to design trainset equipment for European nations such as France and Belgium.

While the speed of the original Zephyr impressed the public, railroads were perhaps more impressed by Budd's ribbed stainless-steel car designs. By 1937 the Atchison, Topeka & Santa Fe Railway placed a large order of 104 cars for its new Super Chief train. 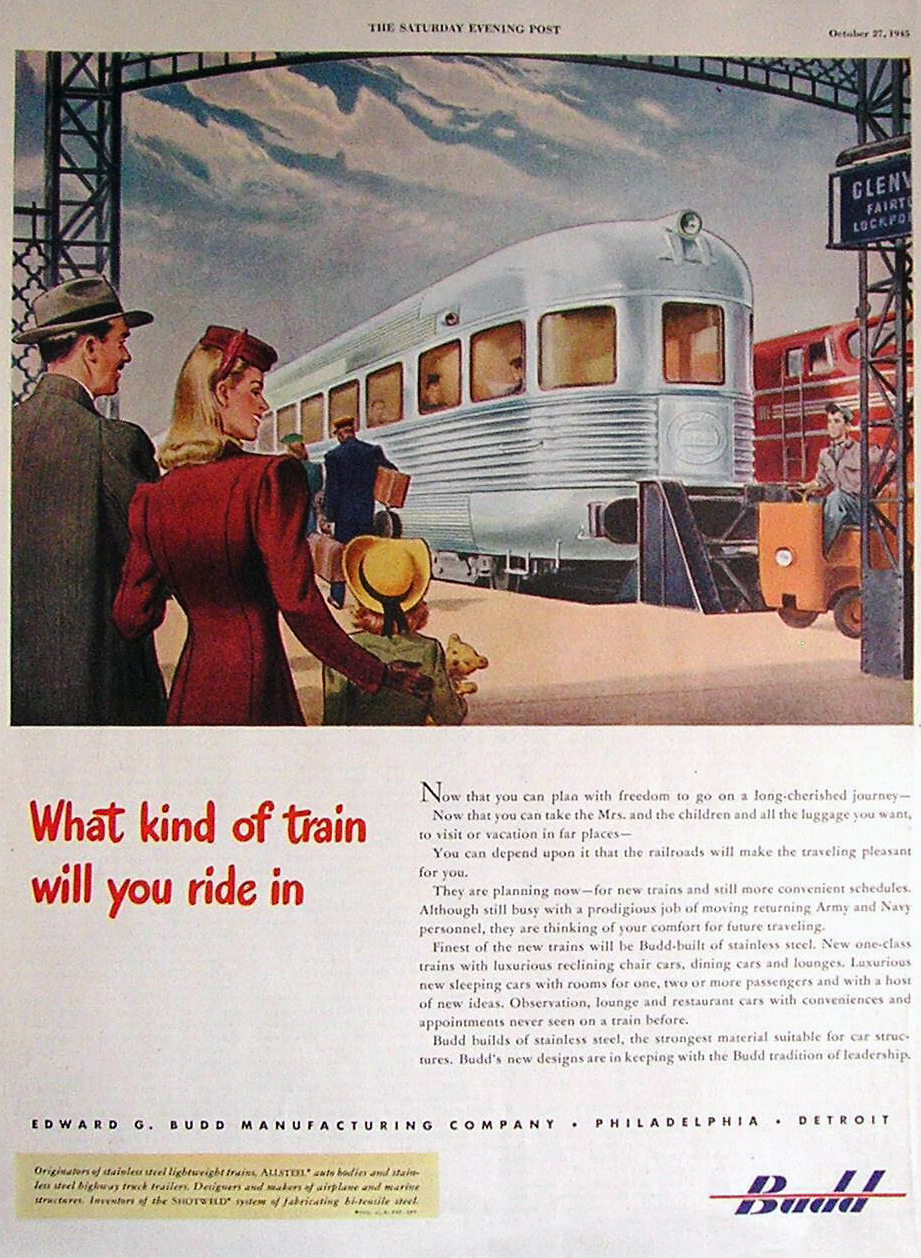 The Santa Fe would become one of the best recognized railroads to operate Budd equipment from the 1930s forward as virtually all of their top passenger trains were equipped with the gleaming stainless-steel.

Interestingly, the Super Chief came about because of necessity. With the Union Pacific having launched its new streamlined City of Los Angeles (which did not carry Budd equipment) in 1936 the Santa Fe needed to launch its own competing premier train between Los Angeles and Chicago.

Having a direct route to the two cities gave the Santa Fe a distinct advantage although its first version of the Super Chief, while well planned, was not really up to par with the City of Los Angeles in that it was not streamlined and used standard heavyweight equipment. 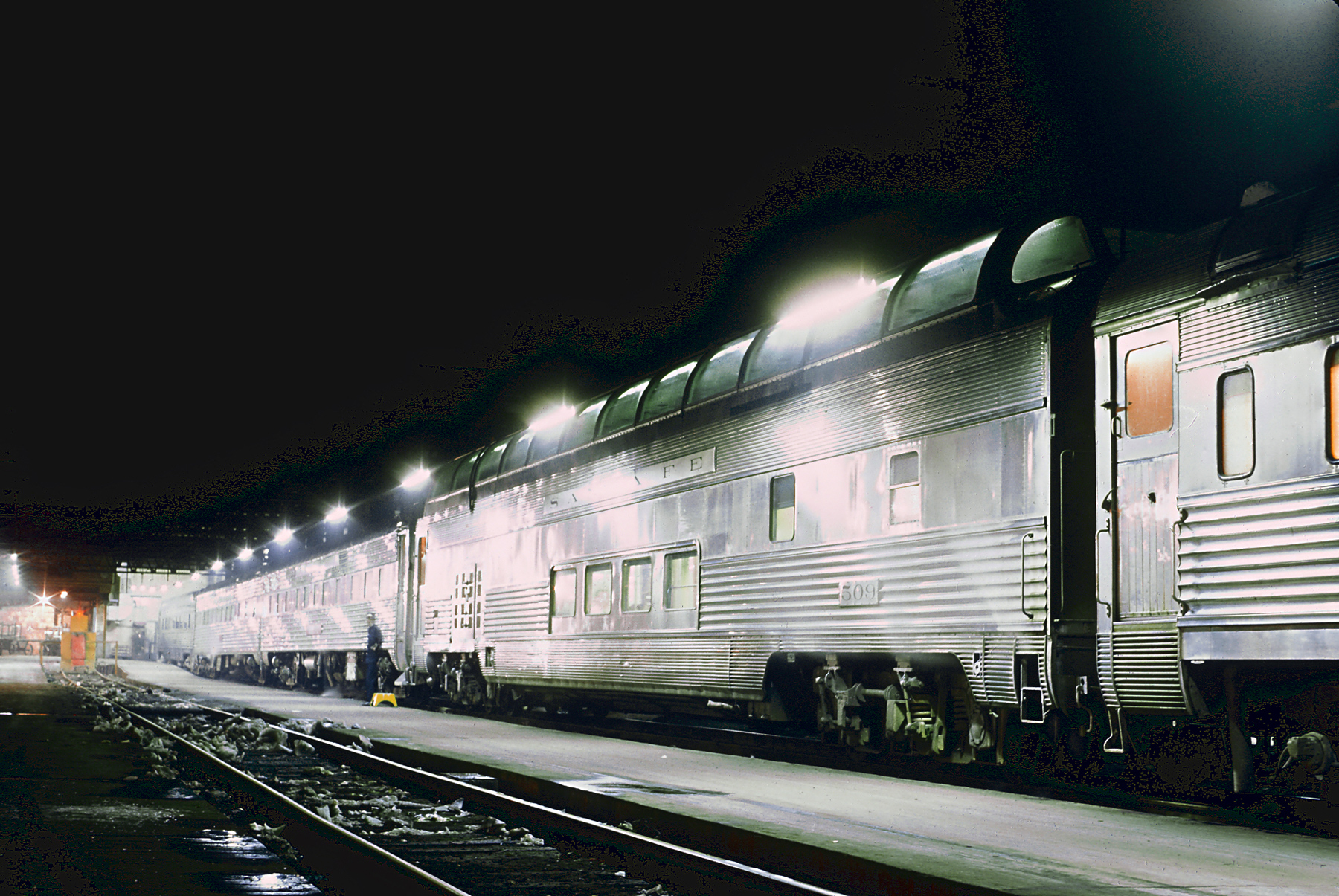 Some railroads were loyal Budd customers, such as the Santa Fe. Seen here is one of the road's "Big Dome" lounges it ordered from the company in 1954 (a total of 14 in all). Seen here is a car attached to train #9, the "Kansas City Chief," awaiting departure from Dearborn Station on February 5, 1968. Roger Puta photo.

Knowing it needed something better the Santa Fe with the help of the Budd Company, introduced the all new streamlined Super Chief in May of 1937.

What resulted was a passenger train unrivaled in style, design, and luxury.

Following the Santa Fe and Burlington numerous railroads would contract through the Budd Company to equip their trains, although many would have to wait until after World War II to do so.

These included the Pennsylvania Railroad, New Haven, Seaboard Air Line, Chesapeake & Ohio, Southern, Norfolk & Western, Southern Pacific, and Union Pacific which received most of their orders following WWII and during the 1950s (the last decade most railroads spent serious money on passenger operations). 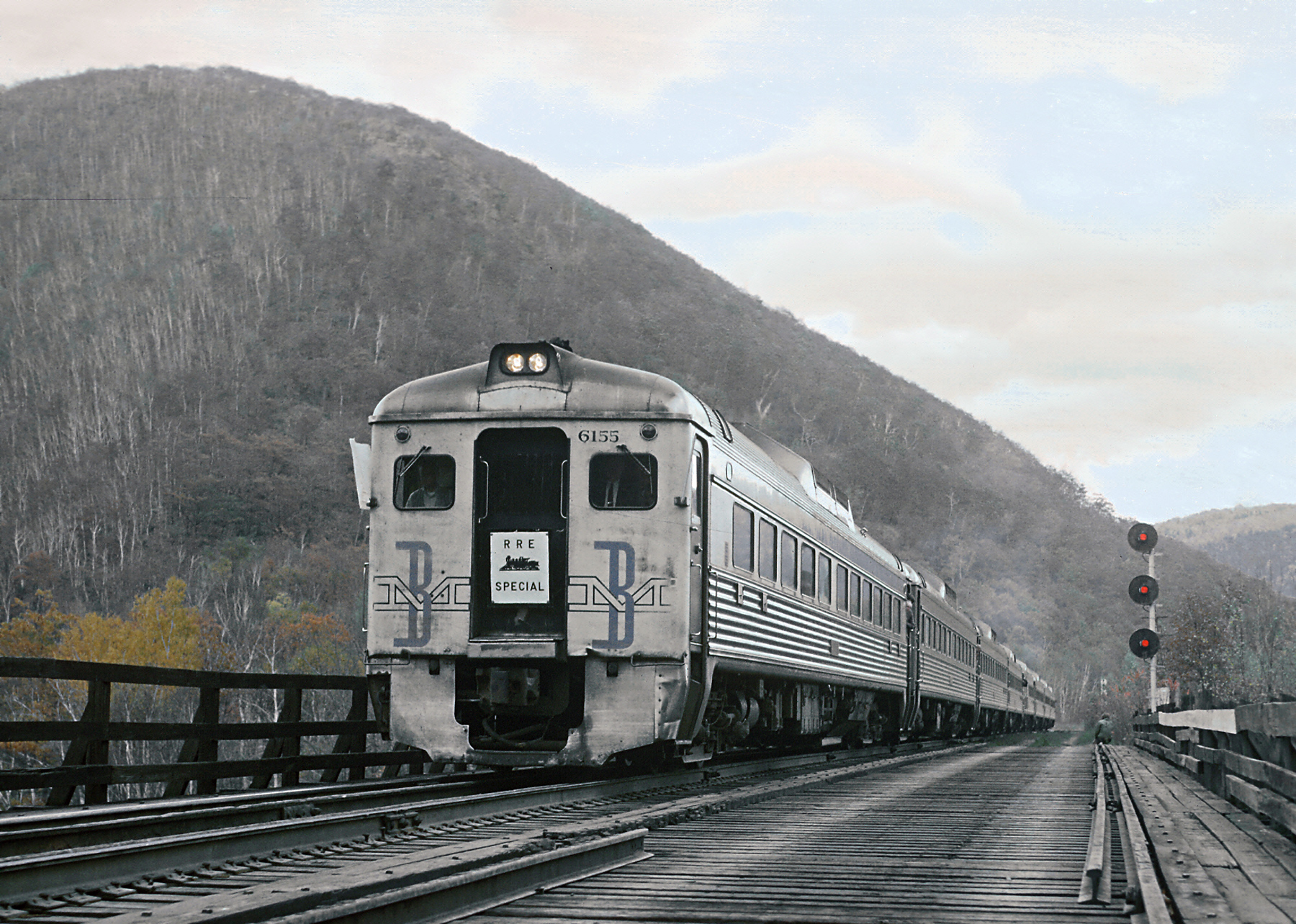 Also, some railroads such as the Milwaukee Road, PRR, and Rock Island purchased Budd commuter cars for their commuter operations with most of these orders coming in the mid-1950s through the 1960s (some of its more well known commuter cars were the Silverliner IIs and Amfleets).

Aside from commuter cars Budd would also be contracted to build subway equipment for a number of operations around the country.

Lastly, Budd contributed to the PRR's famed Metroliner trainset which operated a business train on the Northeast Corridor beginning in the late 1960s.

It should be noted that during the late 1940s for a short time Budd found a profitable side business in building a version of the Doodlebug, a self-propelled passenger rail car.

Budd's version was known Rail Diesel Car, or RDC, and like the Doodlebug was designed to be used on a railroad's lightly populated branch or secondary line. 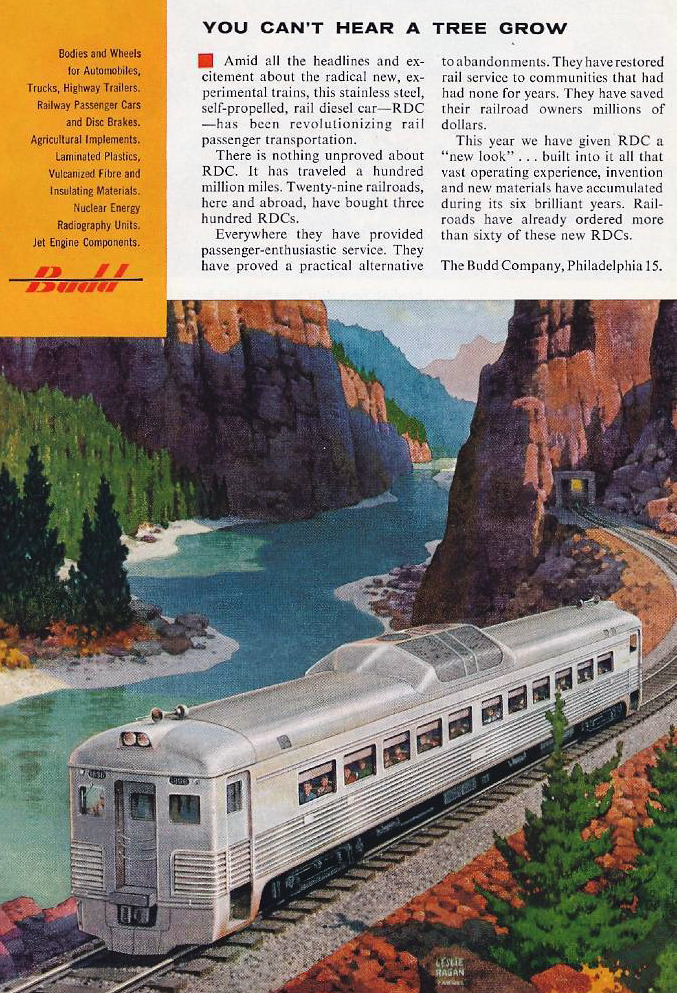 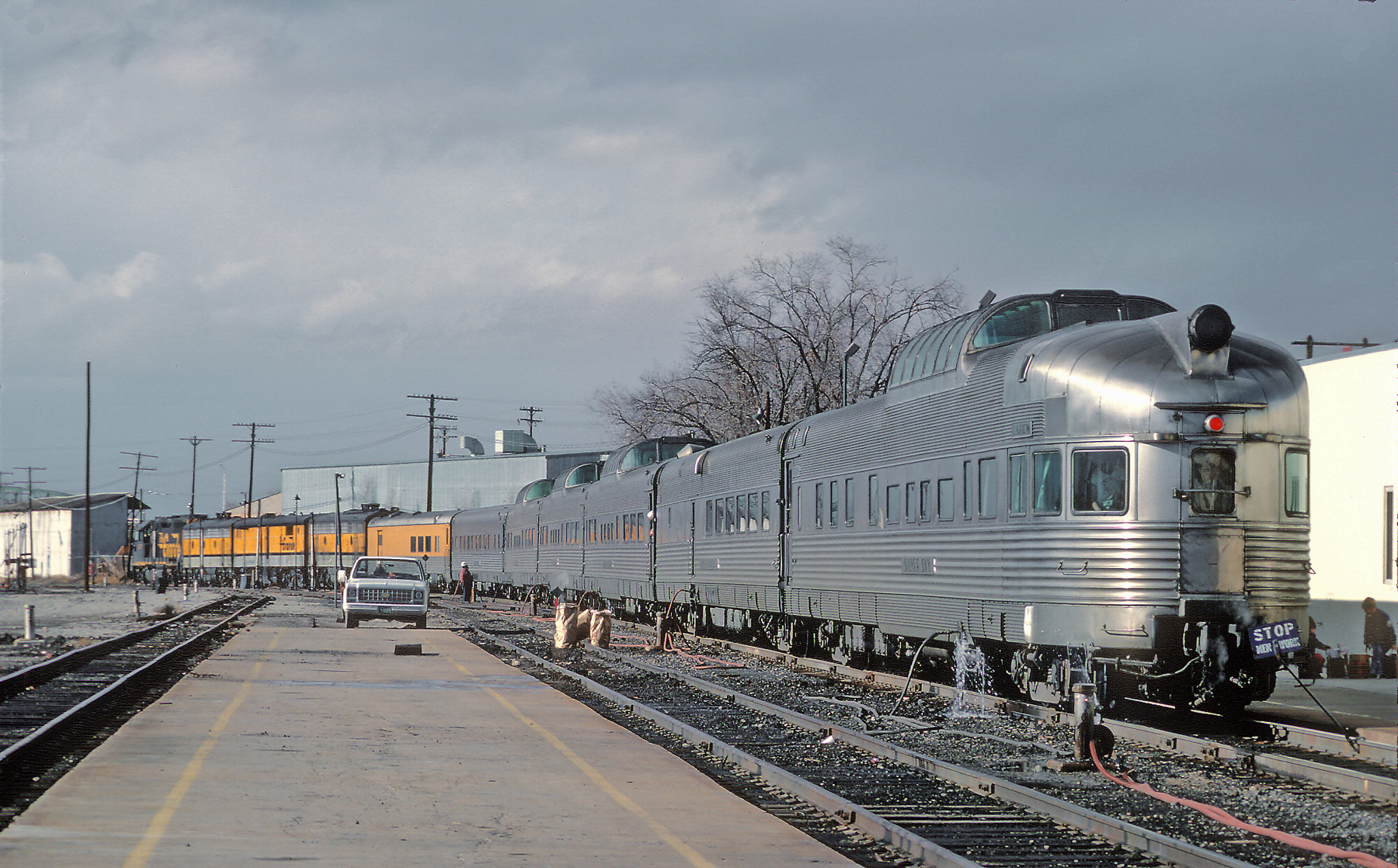 The Burlington remained a loyal Budd customer until the end, as the did the other two roads which comprised the "California Zephyr" route (Rio Grande and Western Pacific). Seen here is dome-observation "Silver Sky" bringing up the tail end of the "Rio Grande Zephyr" in February, 1980. Roger Puta photo.

The RDC turned out to be quite a success selling more than 300 in North America as well as a few as far away as Australia.

As with Pullman, the Budd Company began seeing sharp declines in passenger car contracts from the late 1950s onward.

With the decline in passenger travel as the public chose other modes of transportation such as automobiles and airplanes railroads simply did not need the equipment and by the 1960s many began to throw in the towel and virtually give up on passenger operations.

By the late 1970s Budd had all but exited the now unprofitable passenger rail manufacturing business and at the same time was acquired by the company Thyssen AG whereby it again began building automobile car bodies and components.

After several other mergers and acquisitions the original Budd Company has long since disappeared but its remnants still build automotive components under the company Martinrea International, Inc.