The Norfolk & Western's introduction to high horsepower steam designs began with its fleet of 2-6-6-2's, listed under the heading of Class Z.

The locomotive was in need of larger, more powerful locomotives to handle the heavy tonnage passing over the stiff Appalachian grades found in southern West Virginia.

After experimenting with a number of wheel arrangements the N&W chose the new Mallet type sporting a 2-6-6-2 layout.

The railroad was ultimately quite happy with its compounds and wound up rostering well over 100 examples built by the American Locomotive Company (Alco) and Baldwin Locomotive Works.

Some remained in service until the N&W discontinued steam operations in the late 1950s. The origins of N&W's 2-6-6-2's began in 1904 when the Baltimore & Ohio tested the first articulated steam locomotive in the United States, 0-6-6-0 #2400, otherwise known as "Old Maude."

The compound Mallet's purpose was fairly straight-forward; the B&O was looking for a more powerful locomotive under one platform offering awesome tractive effort thus enabling the movement of heavy coal drags over the railroad's stiff grades along its "West End" main line.

The B&O's variant offered twice the tractive effort of anything it had then had in service. 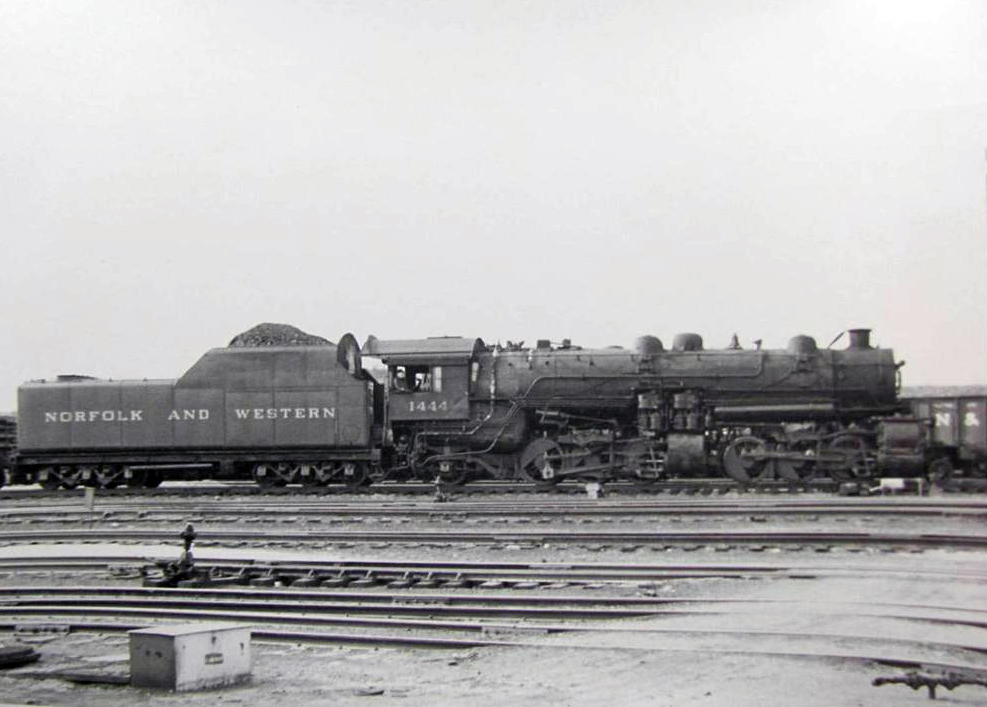 Some railroads, though, came to love compounds because of their ability to pull extremely heavy trains over stiff grades and the Norfolk & Western was one such system (not mentioned were the many lumber companies that adapted smaller Mallet variants, usually tank designs such as the 2-6-6-2T, for logging operations).

Through the early 20th century the N&W had relied on 2-8-0 Consolidations, 4-6-0 Ten-Wheelers, the interesting 4-8-0 Twelve-Wheeler, and similar small designs for freight service.  Once the B&O had proven the Mallet's abilities other railroads took notice and began operating their own variants.

These locomotives were built by Baldwin and both had their inherent drawbacks; the N&W quickly discovered that a lack of lead and trailing trucks made the X-1's unsuitable in road service and the Y-1's had a number of mechanical issues (the Y-1's problems were resolved and the N&W went on to operate an impressive fleet of 2-8-8-2's).

Not satisfied, it turned to the Chesapeake & Ohio and tested its Class H-1 2-6-6-2, #773.  Extremely impressed with the locomotive's ability the N&W ordered virtual duplicates of the C&O's design purchasing its first in 1912 from Alco; listed as Class Z-1 they were numbered 1300-1314.

Both the Z-1's and Z-1a's were comparable although the latter were somewhat powerful; with low, 56.5/57-inch drivers coupled with a larger boiler (exerting 225 psi ) and superheaters they could generate around 75,00 pounds of tractive effort.

By the 1930s the N&W had upgraded a number of its Z-1a's, which it reclassified as Z-1b's (some of these improvements included larger tenders, Worthington BL feedwater heaters, and an updated pilot/headlight assembly).  The original Z-1's were never overhauled and ultimately scrapped in 1934.

By that time it was operating a wide array of powerful other designs such as the upgraded 2-8-8-2 Class Y's and the successful 2-6-6-4 Class A's entered the roster in 1936.

While the newer power bumped the 2-6-6-2's into secondary roles they still found assignments ahead of coal drags, usually working east of Roanoke, while occasionally doing more diminutive yard duties.

Even during the rebuilds  the industry was already moving to simple expansion as they were simply easier to maintain with sufficient tractive effort.  At around the same time the "Super Power" design debuted in 1925 by the Lima Locomotive Works.

In conjunction with the Boston & Albany/New York Central their 2-8-4 "Berkshire," equipped with a large boiler and firebox, became the most powerful non-articulated steam locomotive then in service (the N&W would later go on to build the most powerful 4-8-4's ever built, the famed J's).

Given Class Z-2 the locomotive did not prove particularly successful since the boiler was not powerful enough to provide sufficient steam to the cylinders and was scrapped in 1934.

As Mr. Dixon notes, however, the experience did provide the N&W with valuable information, which it used in producing the very successful Class A's a few years later.

While railroad continued adding new steam power to its roster, or upgrading its current fleet, into the early 1950s more than fifty examples of the 2-6-6-2's still found assignments until the final days of steam later that decade.

All were subsequently retired in 1958 after enough new diesels had arrived to boot them from the roster.

Unfortunately, no examples of the 2-6-6-2's were ever preserved although one example of the Class A's did survive, #1218, currently housed at the Virginia Museum of Transportation.