The Baltimore & Ohio was the first railroad to put an articulated Mallet into service with its 0-6-6-0 "Old Maude" numbered 2400.

The locomotive was employed along the West End in Pennsylvania where it pulled heavy drag freights and proved quite adept in this capacity thanks to its high tractive effort.

The B&O, building from the success of the design, ordered a batch of slightly larger locomotives from the American Locomotive Company (Alco) about a decade later; they carried an 0-8-8-0 wheel arrangement and were listed as Class LL-1.

These too found work on the West End and some remarkably remained in service until the 1950s.  In later years the B&O mostly abandoned the articulated compounds for simple designs like the 2-8-8-4 Yellowstone and 2-6-6-4.

The 0-8-8-0 was, in its own away, a pioneering design alongside the 0-6-6-0.  Railroads recognized the potential of these wheel arrangements, which were essentially two engines under a single frame. 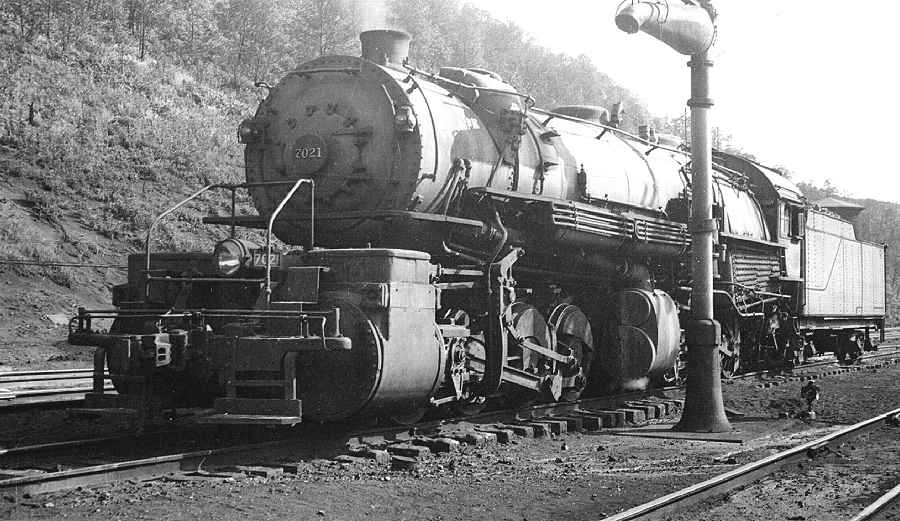 The legend of the B&O's steam program endears even today and its easy to understand why when seeing the types of locomotives it put into service.

From a utilitarian standpoint these machines got the job done; they were powerful, rugged, efficient and some of the most well-built locomotives of their design (the 2-10-2 "Big Sixes" come to mind).

However, outwardly, even someone unfamiliar with railroads could appreciate the elegance of many Baltimore & Ohio steam locomotives; they offered a simple, uncluttered look with clean lines and a symmetrical appearance (i.e., centered headlights and emblems on the smokebox, evenly spaced axles, etc.).

If one was an astute follower of the B&O it was normally easy to pick out those steamers acquired from other roads, many of which not carry such grace.

After the railroad completed successful tests of the original 0-6-6-0, nicknamed "Old Maude," it set out to find another Mallet to work the grades of Maryland, Pennsylvania, and West Virginia.  Its first attempt was the odd 2-6-8-0 of 1911 based from a standard 2-8-0 Consolidation.

This locomotive ultimately proved troublesome and a relative failure after just a few years of service.  However, that same year it placed an order for a larger, more powerful version of the "Old Maude."

This latest design was also manufactured by Alco and carried an 0-8-8-0 wheel arrangement.  They were originally listed as Class O-1 although later amended to LL-1.  The new Mallets began arriving on the B&O's property in 1911 and all thirty had been delivered by 1913.

At the time the 0-8-8-0s were the most powerful locomotives on the B&O's roster capable of producing more than 98,000 pounds of tractive effort sporting 56 inch main drivers.

The Mallets carried an overall wheelbase of just over 77 feet, much longer than the "Old Maude," and weighed roughly 334 tons (also eclipsing the 0-6-6-0).  According to SteamLocomotive.com the engines were originally fitted with Walschaert valve gear feeding the low-pressure cylinders but these were later replaced with Baker valves.

In service it is said the LL-1's were "slow and complicated."  However, apparently the B&O liked the compounds well enough to continue operating a few in helper and drag service through at least mid 1948.

This is interesting for a few reasons; first, by that time the railroad was already working to retire its remaining steam fleet and second, it had many other, more advanced articulated designs on its roster (such as the 2-8-8-4, 2-8-8-0, 2-8-8-2, and 2-10-2 among others).

Exactly how long the 0-8-8-0s remained active on the B&O is not entirely certain to this author.  However, based on the fact that many of its wheel arrangements, both articulated and rigid designs, continued to work freights through the early 1950s it is quite likely that at least one example of an LL-1 remained in service through that time as well (though it is almost certain that none survived the B&O's 1956 renumbering program, which made room for newly arriving diesels).

Throughout the history of its steam program the Baltimore & Ohio found four main driving axles (or sets) very much to its liking.

This isn't terribly surprising considering the steep grades it dealt with in the east and the tractive effort needed to move heavy trains over those mountains.  However, it is nevertheless interesting.

One of its first primary freight locomotive designs was the 0-8-0 "Camel" followed by the Consolidation of the late 19th century.  The 2-8-0 became standard power until the first 2-8-2s and Mallets began arriving during the first decade of the 20th century.

During the remainder of the steam era four axles, or larger, dominated freight service on the B&O (most of which have already been mentioned above).

The railroad even employed the powerful 4-8-2 Mountain in passenger service beginning in the 1920s.  Unfortunately, no examples of the Class LL-1's were preserved.