The duplex drive steam locomotive was originally conceived by the Baltimore & Ohio in the 1930s as a more advanced concept over the standard designs of the day by gaining more power and speed through the use of two sets of driving wheels under a rigid frame.

The B&O's only example was listed as Class N-1 and given #5600; it was also named after the engineer which came up with the idea, the railroad's General Superintendent of Motive Power & Equipment, George H. Emerson.

As an experimental the B&O ran into the usual troubleshooting issues one might expect with a such a new and unproven locomotive.

With the onset of the diesel age the railroad grew disinterested in refining its duplex locomotive and after sitting in storage for many years the #5600 was scrapped after World War II.

The Pennsylvania Railroad picked up on B&O's concept a few years later and resolved some of its rival's issues by lengthening the wheel-base.

However, the PRR continued to have its own problems with the design.  Before these could be ironed out the concept was dropped in favor of the diesel locomotive. 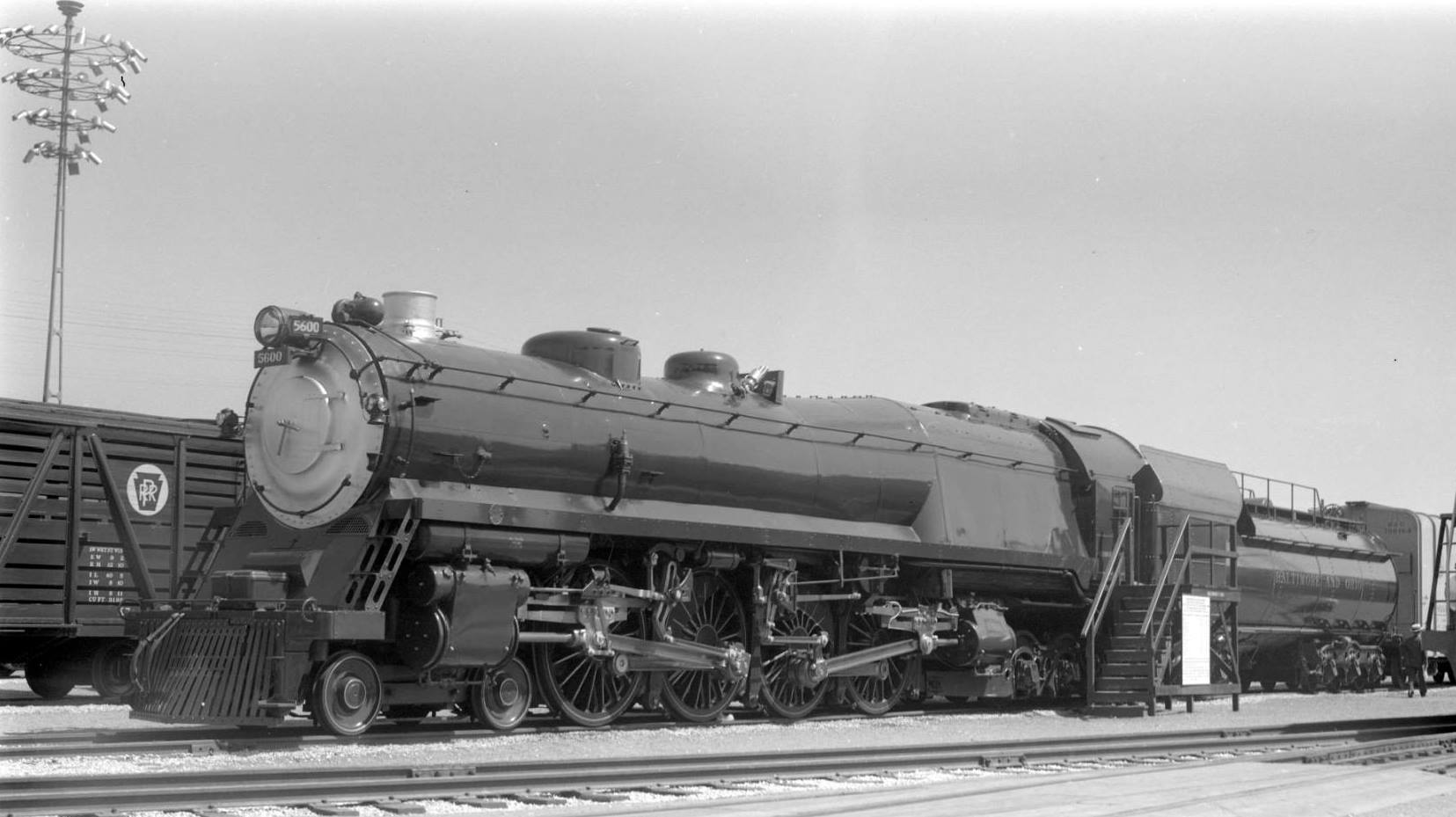 The Baltimore & Ohio was a railroad always either at the forefront of the latest steam technology or constantly improving its locomotives; it put the first articulated Mallet into service in 1904 (0-6-6-0 Class DD-1 #2400 named "Old Maude") and developed the first duplex drive during June of 1937.

The idea behind the concept was to further advance steam technology, perhaps as the next generation to enter service.  At this time the diesel was only starting to be accepted by the industry as a reliable form of motive power.

However, it remained limited primarily to switching and secondary roles as road power like the American Locomotive Company's RS1 (the first road-switcher) and Electro-Motive's revolutionary FT cab model were still a few years away.

The B&O constructed the duplex drive at its Mt. Clare Shops in Baltimore, which was well known for its ability to turn not only innovated locomotives but also classic designs like their beautiful Class P 4-6-2 Pacifics and Class T 4-8-2 Mountains.

The railroad's aforementioned chief of motive power, George Emerson, who is credited with many of the company's successful applications of steam during the 20th century, came up with the design.

The locomotive carried a 4-4-4-4 wheel arrangement (in a standard design using a primary rod and a single set of cylinders it would have been a 4-8-4 "Northern" type), numbered 5600, and was given Class N-1; it was also named the George H. Emerson for his many contributions to the company since the 1920s.

As David Mainey notes in his book Baltimore & Ohio Steam In Color, #5600 was clad in semi-streamlining and looked similar to an English-built machine.  The basic premise behind the concept was to develop a more powerful, rigid-framed locomotive that used two sets of powered drivers instead of one.

It would also, in theory, reduce maintenance since it used lighter and smaller main rods (four in all).  Unlike the Pennsylvania Railroad, which advanced the design further than any other company and is most often associated with the duplex drive, the B&O's approach was a bit different by locating the back set of cylinders (nearest the cab and under the firebox) behind the rear drivers.

This setup turned out to be one of the locomotive's glaring issues, among others.  By placing the cylinders under the firebox they had a tendency to overheat as well as collect dirt and dust.

Emerson equipped the #5600 with his self-designed, water-tube firebox, which he had been testing since 1930 on Class T-1 4-8-2 #5510.  The idea behind this special firebox was that it held a greater heating surface to the surrounding fire.

For instance, according to SteamLocomotive.com regarding #5510 the water-tube firebox offered an 82% increase of the surface area (from 474 square feet to 866 square feet), "...including the 83 square feet of arch tubes."

Other features of the #5600 included its high 350 pounds of boiler pressure, 76-inch main drivers, Walschaerts valve gear, and 18 x 26 1/2-inch cylinders (according to Mainey's book all four were integrally cast, the first of their kind).  Additionally, the locomotive weighed 391,550 pounds (nearly 196 tons) and offered 65,000 pounds of tractive effort.

The B&O intended its 4-4-4-4 to be used in passenger service where it was employed through the early 1940s (during the 1939 New York World's Fair the George H. Emerson was put on display to the amazement of visitors).

Unfortunately, numerous issues and the advancement of the diesel doomed the locomotive.  The Emerson firebox proved problematic with vibration issues and it was not sufficiently insulated; in general it never offered significant advantages over a standard firebox.

Additionally, the locomotive experienced problems related to its bearings that constantly kept it sidelined.  Perhaps in time the B&O could have ironed out many of these setbacks but interest in steam was waning as diesels proved they were capable main line power.

When she was first conceived, the George H. Emerson held much promise.

Aside from the intended advantages already mentioned its smaller and lighter main rods meant fewer counterbalance weights were needed and a short wheel base would have allowed it to operate all across the B&O's vast system.

In service the #5600 was given mixed reviews by the crews that operated her; in general the locomotive offered a good ride but had a tendency to slip and would not always stop precisely.

As problems mounted with #5600 it mostly sat in storage from the early 1940s until 1950 when it was finally scrapped in October, 1950.  Perhaps most unfortunate is that the B&O did not preserve this unique locomotive since it was an experimental and the railroad often sent such interesting creations to its museum in Baltimore.