Like many railroads the Baltimore & Ohio used the 4-6-2 "Pacific" steam locomotive as primary passenger power from the early 20th century until all were retired in favor of diesels by the mid-1950s.

The B&O owned a myriad of Pacifics built by either the American Locomotive Company (Alco) or the Baldwin Locomotive Works while the railroad itself built a few of its own from scratch.

Additionally, shop forces oversaw numerous modifications of the 4-6-2s over the years resulting in a dizzying array of sub-classes.

In general, the B&O's Pacifics are widely regarded as some of the most handsome ever built, notably its "President" Class P-7's.  During their final years of service some were relegated to freight or helper service and of the more than 200 manufactured, today just one survives.

B&O's 4-6-2s could be found in all types of service, not only on top trains like the Capitol Limited.  As in the below photo, the locomotives were assigned everywhere, even secondary and branch runs.

The railroad's most famous were a group of four streamlined for the striking Cincinnatian in the 1940s.  The B&O largely elected against using power larger than 4-8-2's for passenger service; instead, it began acquiring diesels as soon as production models were available in the late 1930's. 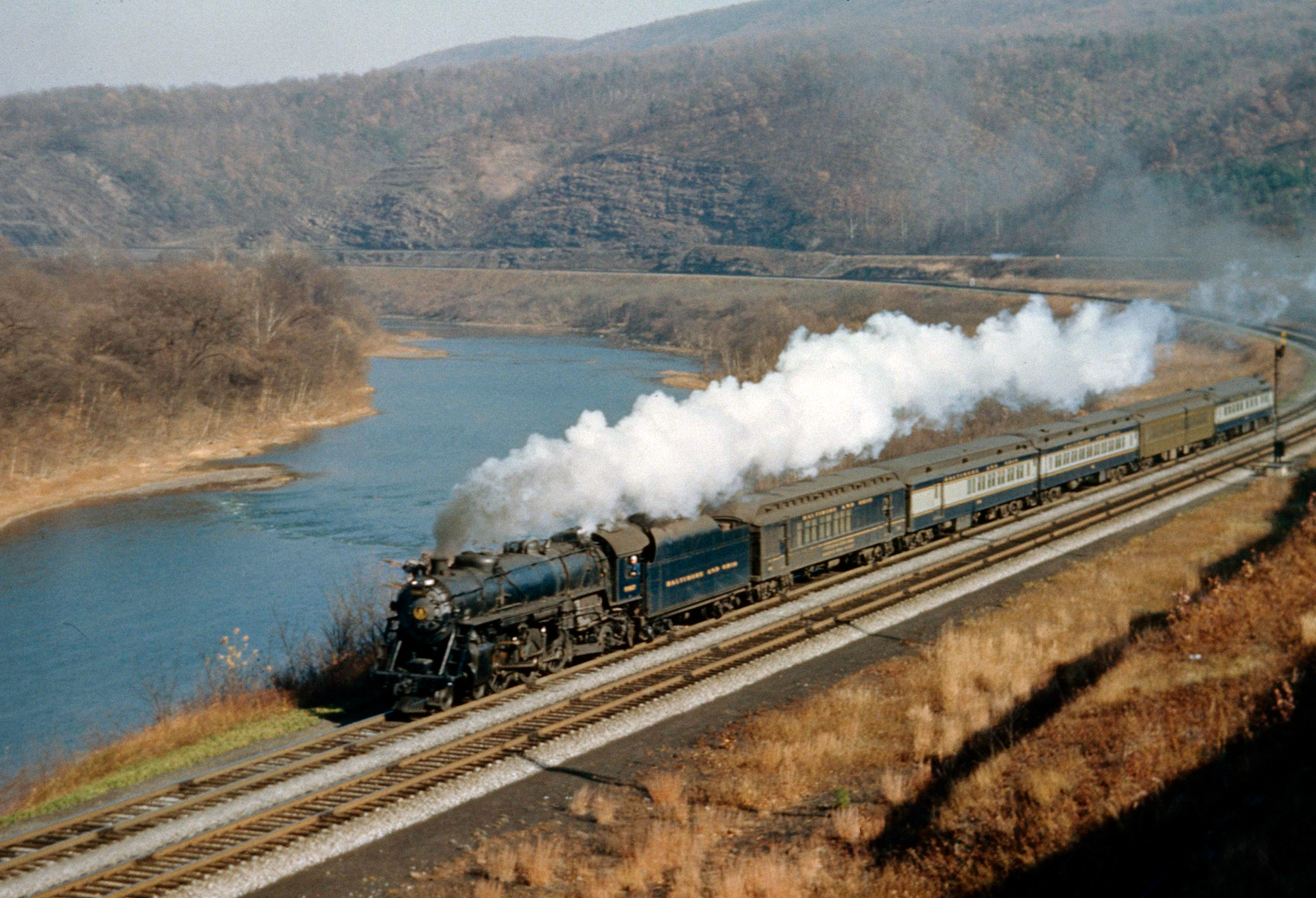 One of the Baltimore & Ohio's handsome P-7's (4-6-2), #5307, steams westbound with train #21 on the East End at rural Hansrote, West Virginia during a late fall afternoon in the 1950's. The railroad followed the Potomac River closely along the Cumberland Division. Bill Price photo. American-Rails.com collection.

As one of the major eastern trunk lines behind only the Pennsylvania and New York Central the B&O had a very large passenger market (stretching from New York City to Chicago and St. Louis) to cover.

Prior to the development of the first, true Pacific which entered service on the Chesapeake & Ohio in 1902 the B&O relied on a series of smaller wheel arrangements from the all-around 2-8-0 Consolidation and 4-6-0 Ten-wheeler to the fast and agile 4-4-2 Atlantic.

The 4-6-2 combined the speed of the Atlantic and the power of the Ten-wheeler becoming the most successful passenger steam locomotive ever built with more than 6,800 manufactured.  The B&O recognized its advantages early and ordered its first batch of 35 from Alco in 1906. 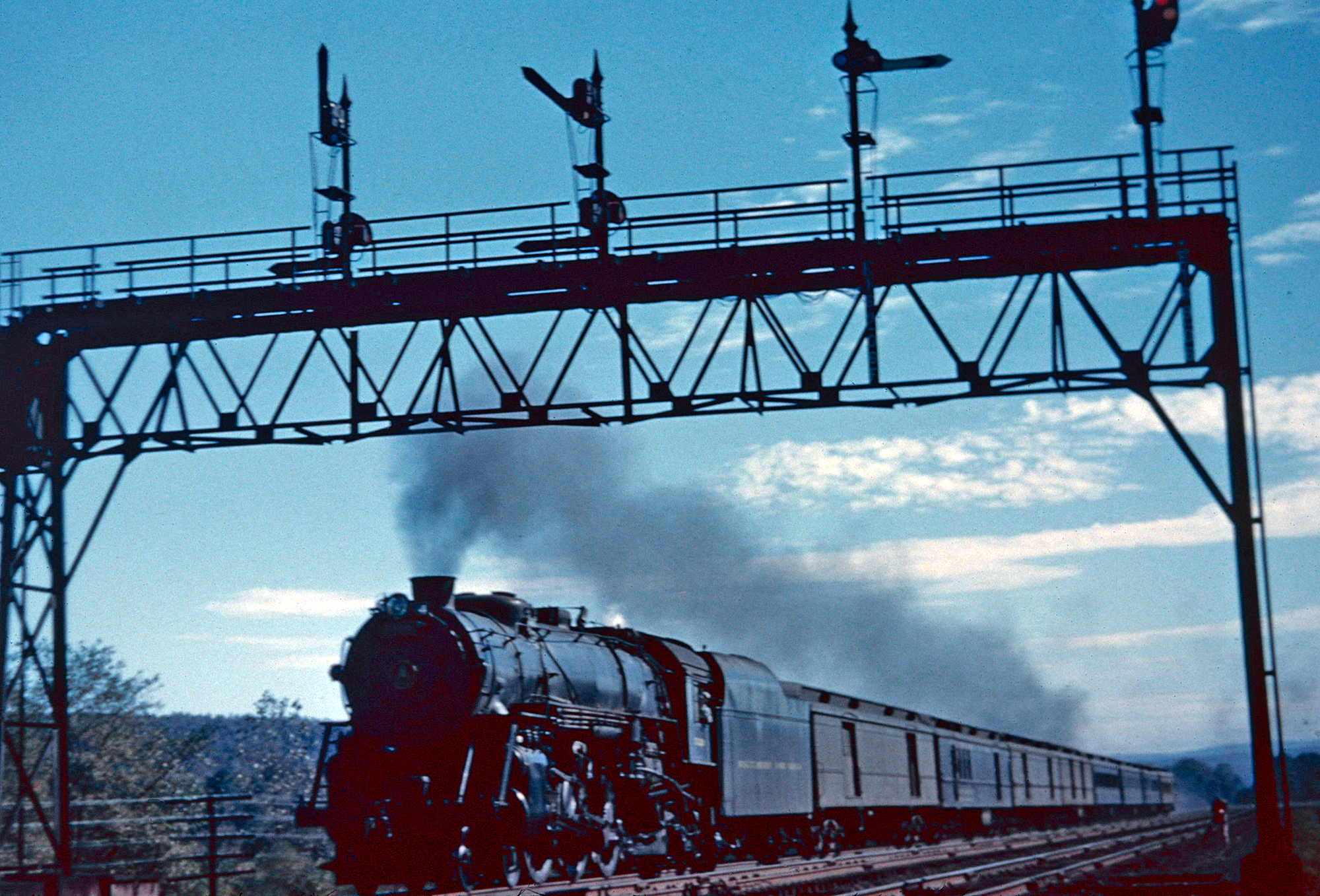 One of the Baltimore & Ohio's handsome 4-6-2's hustles a passenger train, heavy with mail/express on the head-end, under the signal tower just east of Green Spring, West Virginia at Milepost 169 during the 1950s. American-Rails.com collection.

These 4-6-2s were given Class P and originally numbered 2100-2134.  These first B&O Pacifics were not as large or as powerful as its later examples but they did well at conquering the grades of the West End compared to the earlier wheel arrangements.

A common trend on the railroad over the years, for which it was well noted, was overhauling its steamers.  The purpose of this was, not surprisingly, to squeeze out the maximum amount of efficiency and power possible.

For instance, during the 1920s the Class P's were overhauled with superheating and Walschaerts valve gear resulting in new designations as Class P, Pa, Pb, and Pc.  These subclasses became a common theme on the B&O which has made it difficult, even today, figuring out the proper designation for a particular locomotive.

Regarded as a heavy Pacific with tractive efforts above 43,000 pounds (or more than 8,000 pounds more than the Class P's) the steamers usually worked the stiff grades west of Cumberland along the Pittsburgh and Monongah Divisions.

This shifted the Class P's back east (Washington, D.C./Baltimore to Philadelphia) and brought about the retirement of most remaining 4-6-0s and 4-4-2s still in service there.

At the same time the railroad took some of its 2-8-2 Mikados and rebuilt them as Pacifics (roughly 30); given Class P-1c and P-1d they offered respectable power. 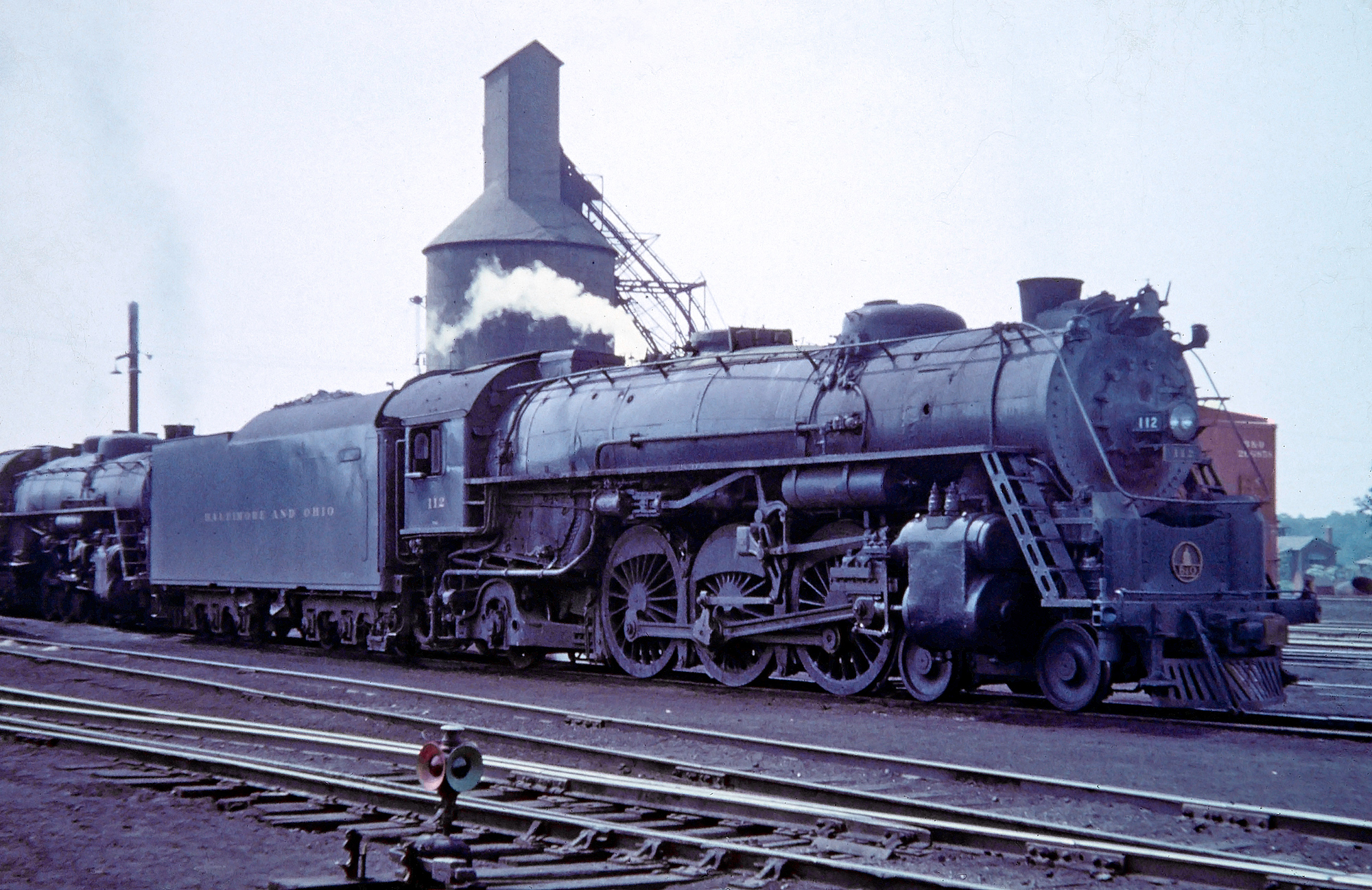 Baltimore & Ohio 4-6-2 #112 (P-7e) is seen here in Garrett, Indiana, circa 1957. This locomotive was formerly #5312, named the "President Pierce," part of the B&O's "President" class of Pacifics. By this date the engine had been renumbered for newly arriving diesels and would be off the roster within the year. Fred Byerly photo. American-Rails.com collection.

The P-1's were the B&O's most heavily modified class as most future Pacifics more or less carried the same (or similar) designation.  In 1913 the railroad went back to Baldwin for more, this time listed as Class P-3 and numbered 5100-5129.

Then, there was the Class P-7's.  All of the B&O's 4-6-2s are remembered for their good looks thanks to a clean, semi-streamlined look and symmetrical appearance (notably a result of evenly spaced drivers and a centered headlight, number-board, and "B&O" logo on the smokebox).

The locomotives became known as the President Class since all twenty were named (and lettered) after the first twenty presidents of the United States.  They were also presented in a stunning livery of olive green with gold trim.

A year later the B&O added #5921 (built by its own shop forces), listed as Class P-9, and named President Cleveland.  As delivered these Pacific's were the most powerful in the fleet offering the highest axle loadings and tractive efforts, among other advantages.

Starting in 1942 the B&O began phasing out the President Class, returning them to standard black and without names.

A few, however, garnered additional special treatment; #5301-5304 were overhauled and streamlined in 1946 for the new Cincinnatian serving Cincinnati and Washington, D.C./Baltimore.

The streamlining, which featured a two-tone royal blue livery with silver trim and simple shrouding covering the entire locomotive was designed by the B&O's own Olive Dennis, a female engineer.

The locomotives were then designated as Class P-7d and continued to carry their handsome look after the Cincinnatian was transferred to the Detroit - Cincinnati route where they remained until retired in the mid-1950s.

After World War II the Pacific's still in service were a hodgepodge of numbers and class designations as the B&O retired more and more.

A few (all Class P-7's) survived as late as 1958, remaining in service long enough to sport such upgrades as Timken roller bearings and a new 100 numbering series to make room for more diesels. 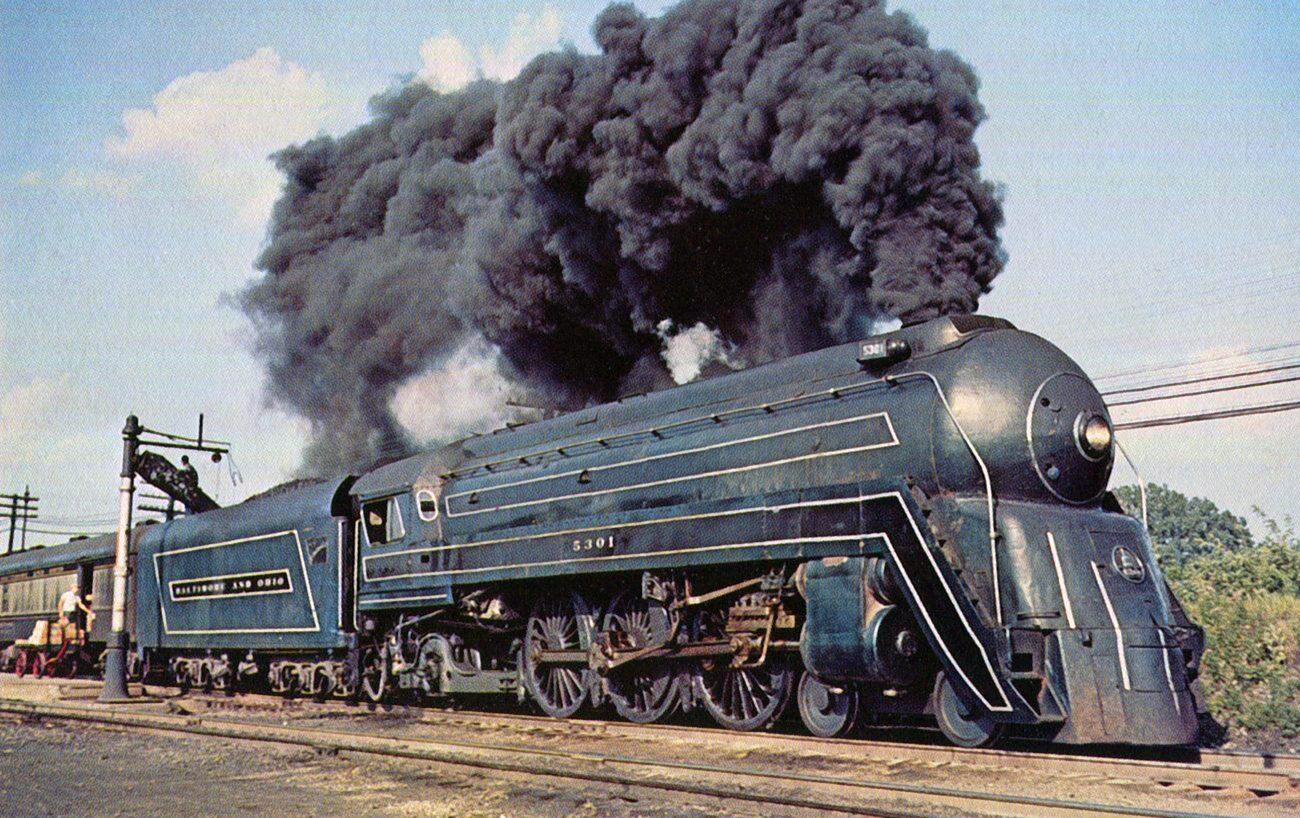 One of the B&O's four handsome Class P-7d's, #5301, makes a station stop at Deshler, Ohio with the westbound/southbound "Cincinnatian," in July, 1956. This was the later version of the train which operated between Cincinnati and Detroit. Steam was in its twilight powering this train. Don Wood photo.

Given the Baltimore & Ohio's financial state, only one 4-6-2, of more than 200, survives today; #5300 was the first of the Presidents, named George Washington, and given to the B&O Railroad Museum in Baltimore following her retirement where she still resides today.

It should be worth mentioning that the B&O operated a handful of other 4-6-2s; in 1910 it purchased a batch of five (501-505) from Alco for subsidiary Cincinnati, Hamilton & Dayton.

It went back to Alco in 1924 for more, sub-lettered for subsidiary Cincinnati, Indianapolis, & Western numbered 121-124.

Finally, it picked up 22 others with its purchase of the Buffalo, Rochester & Pittsburgh in 1932.  The BR&P listed theirs as Class WW/-2 but after the B&O takeover were merged into the Class P's.  They were smaller and not quite as powerful as the B&O's originals and all were retired by 1953.