Few places in the United States offer such breathtaking and incredible scenery as Alaska.  Our country's 49th state, which joined the Union on January 3, 1959 is truly "The Last Frontier."

Its lands remain largely undeveloped, just as they did thousands upon thousands of years ago.  Here you can see mountains at every turn, glaciers, seaside vistas, and even fjords.

There are also eight different national parks available to experience.  The most famous is certainly Denali National Park, home to North America's highest peak which towers over the region at 20,156 feet (formerly known as Mt. McKinley).

If you want to see nature at its most beautiful a visit to Alaska is a must.  One way is by train.   There are only a few to choose from but they are absolutely worth the ticket price!

The company is also the only private company offering regularly schedule passenger service in the United States.  These trains are not only popular tourist attractions but also act as a vital transportation service for locals!

Alaska is also home to the most visited tourist railroad in the country, the White Pass & Yukon Route.  Presented here is a brief overview of these operations as well as the state's other related attraction. 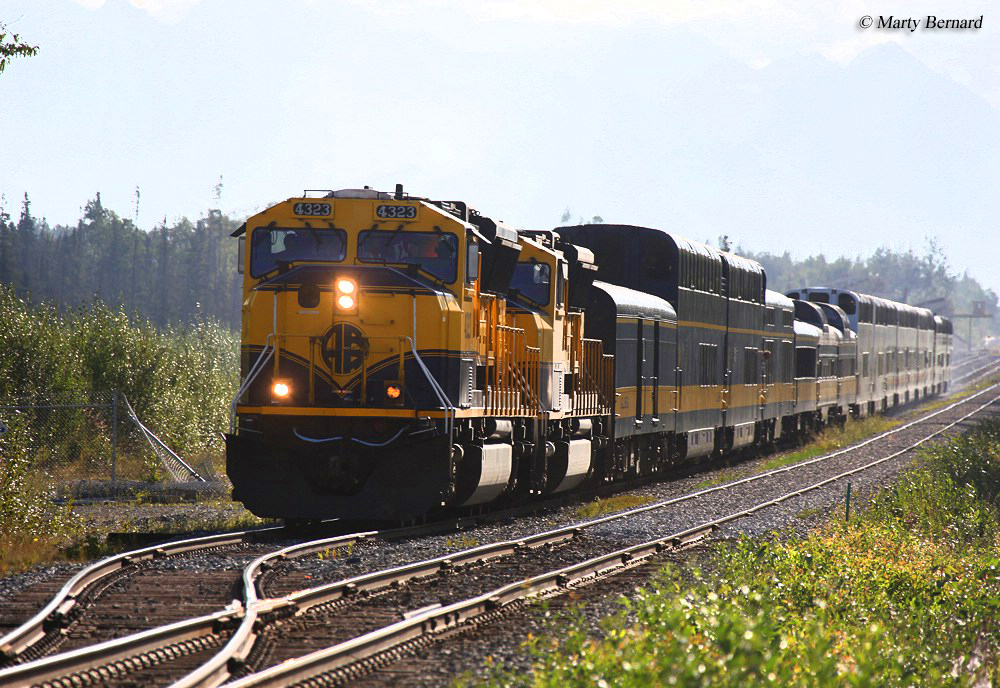 A Brief History Of Alaska's Railroads

Alaska's history with the railroad has been relatively recent when compared to the industry overall.

The Granite Railway is regarded as the country's very first chartered railroad, established on March 4, 1826 for the purpose of moving cut granite between Quincy, Massachusetts and the Neponset River at Milton.

As a horse/mule-powered operation its only purpose was to furnish stone for the Bunker Hill Monument.  However, it proved so profitable it remained opened after the project's completion.

During the 1880's there was more track spiked down than during any other decade.

In his book, "The Routledge Historical Atlas Of The American Railroads," author John F. Stover's notes that in 1880, 93,200 miles of track were in service; just nine years later this number had nearly doubled to 163,600 miles for a gain of 70,400 miles!

For Alaska, the iron horse was a late arrival.  It all began with the Klondike Gold Rush of 1897 when prospectors sought a better means of reaching the fields near Dawson City, Yukon Territory.

The grueling trip, utilizing pack horses, departed the Port of Skagway and traveled largely by foot over the Chilkoot or White Pass.  Once at the Yukon River one needed to board a steamboat to reach Dawson City.

To ease this difficult journey, the White Pass & Yukon Railway Company Limited was chartered and organized in London, England.

According to the article, "White Pass' New Gold" by author Karl Zimmermann from the May, 2006 issue of Trains Magazine, it was also backed by British interests to tune of $10 million.

It was built to 3-foot, narrow-gauge standards and ran a total of 110.7 miles from Skagway to Whitehorse in the Yukon.

It did not reach Dawson City, or even Fort Selkirk as one projection wished, but by terminating at Whitehorse riverboats could take the river for the trip's final leg.

As the gold rush subsided, the WP&Y transitioned to other traffic, notably raw materials/mining. It also supported the war effort during World War II.

Afterwards it became a successful freight hauler by moving lead/zinc ore.  This persisted for several decades until Cyprus Anvil closed its mine at Faro on June 4, 1982.  As the railroad's primary source of traffic it was forced to shutdown.

Thanks to an ever-increasing number of cruise ships docking at Skagway, which sailed passengers through Alaska's peace and tranquil Inside Passage, the WP&Y reopened in 1988 as a tourist railroad whereupon it was renamed as the White Pass & Yukon Route (WP&YR).

That first season it handled 37,000 riders, numbers that quickly rose in the following years.

Today, it carries more than 450,000 annually, a number even more impressive when one considers its operating season lasts only from late April through the end of September.

Today, the WP&YR no longer operates to Whitehorse and terminates all trains at Carcross (roughly the halfway point). 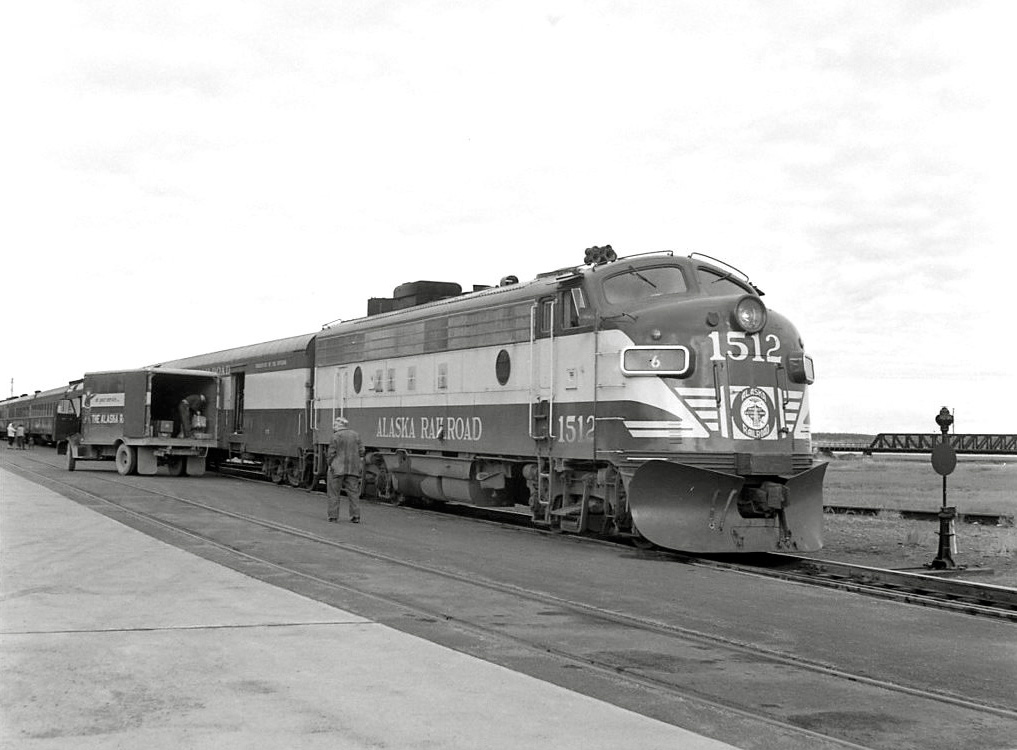 Without question, Alaska's most famous railroad is the one named after it.

The Alaska Railroad's story begins shortly after the WP&Y's opening when the Alaska Central Railroad finished 51 miles from Seward, along the southern tip of the Kenai Peninsula, to the north in 1903.

According to the book, "High Iron To Fairbanks" by author Evan McKinney, before further work could be undertaken it entered receivership in 1909.

At the time, it linked no major cities but its port connection and available trackage did offer a vital transpiration need within a region where even reliable horse trails were scarce.

Following its bankruptcy the system was reorganized as the Alaska Northern Railway and then extended an additional 20 miles to Kern Creek in 1910.

The Alaska Railroad's immediate heritage began in 1914 when Congress purchased the Alaska Northern and authorized funding to complete a line from Seward to Fairbanks, realizing private backing would not bother finishing such an endeavor due to its high construction costs and low projected returns.

With the government takeover, and capital in place, work got underway.

The first task involved acquiring another small system, the 45-mile narrow-gauge Tanana Valley Railroad near Fairbanks, which was upgraded and rebuilt to standard-gauge operation.

From that point, the task of linking Anchorage and Fairbanks moved forward.

The effort faced numerous setbacks, from bridge and right-of-way washouts to funding shortfalls brought about through indecision (and arguing) in Washington.

Despite these many issues crews were finally able to link the two cities within nine years with an official ceremony held on July 15, 1923.

The Alaska Railroad is technically not a tourist railroad but an operating freight system, acting as a crucial artery for handling all types of business.  The company also aides the military.

In addition, it offers regular passenger service.  It was transferred from federal to state ownership when President Ronald Reagan signed legislation regarding such in 1983.

The move was made official on January 5th, 1985. The state spent $22.3 million to purchase the railroad although the final price tag was nearly $100 million as Alaska had to spend an additional $70 million bringing the right-of-way up to proper standards due to many years of deferred maintenance.

The company also enjoys a bustling tourism business during the summer season.  If you have the means for such a vacation, an excursion on this railroad should be a bucket list item!

Please note!  As of this writing, Alaska Railroad 2-8-0 #557 is currently under restoration  in Wasilla.

The locomotive was originally built by the Baldwin Locomotive Works for the United States Army Transportation Corps (USATC) as #3523 in December, 1944.

It then became Alaska Railroad #557 and spent many years in service.

It was the last steam locomotive to operate on the railroad and retired in June, 1963.  Afterwards, it was sold to scrap dealer Monte Holm in Washington State, who preserved it.

There are no definite plans for the Consolidation at this time although once restored to operating condition may be used to pull excursions.  Stay tuned!

This organization is the state's largest, based in Wasilla.  They provide a large collection of historic transportation displays and artifacts, including railroad collections.

Their notable pieces include Alaska Railroad F7A #1500 (manufactured by General Motors' Electro-Motive Division in December, 1952) and RS-1 #1000 (built by the American Locomotive Company in May, 1944).

Interestingly, there are several ARR diesel locomotives either preserved or in operation around the country.  However, few of these historic units can be found within the state, aside from the two mentioned here.

Additionally, the museum features short scenic train rides on the grounds.  Admission is required and it is typically open from Mother's Day to Labor Day each season.  For more information please visit their website.

The Tanana Valley Railroad Museum, based in Fairbanks, is a small excursion operation featuring an historic 0-4-0T steam locomotive built by H.K. Porter Company in 1899.

It preserves the history of a company by the same name, which opened a short, 3-foot narrow-gauge operation in 1905 within the Tanana Valley.

The TVRR (originally incorporated as the Tanana Mines Railway in 1904) was built to serve the Interior Alaskan Gold Rush along the Chena River (this mining boom later shifted to the Goldstream and Chatanika river valleys).

The railroad did blossom for a few years during this time with service peaking through 1912.

While at the museum be sure and ride the Crooked Creek Whiskey Island Railroad, which is operated by Pioneer Park and runs the grounds' perimeter (the museum allows use of its depot for the ride).

The little attraction is pulled by 0-4-0T #1 (manufactured by H.K. Porter in 1899), the first locomotive Yukon and the Interior of Alaska.  To learn more please stop by their website.

Thanks to the Tanana Valley Railroad Museum for help regarding the information in its listing. 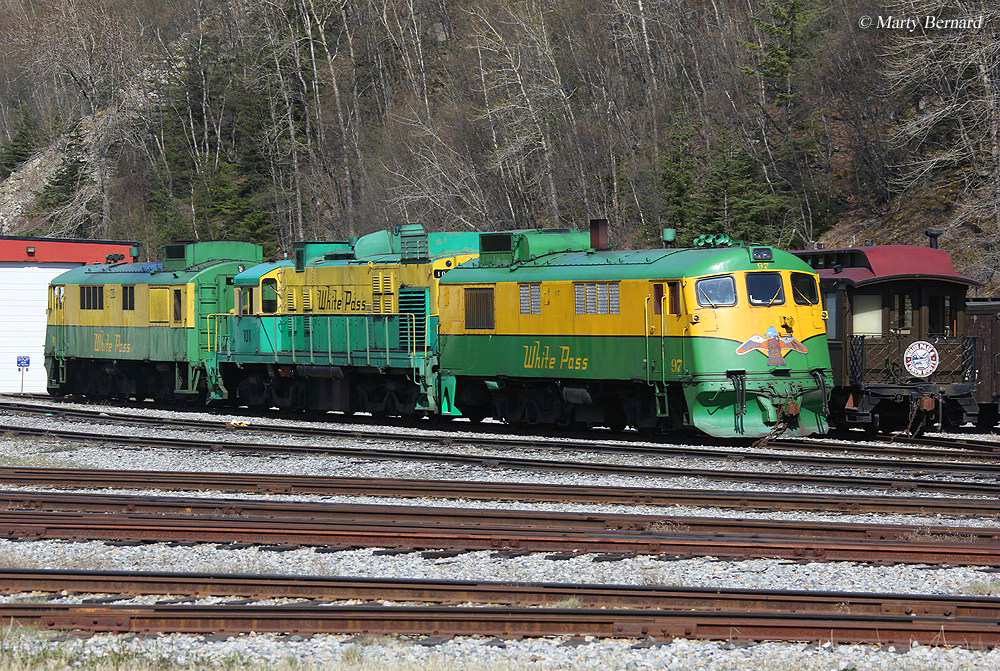 The narrow-gauge White Pass & Yukon Route, located in Skagway, is the busiest tourist railroad in the country.  With an operating season lasting essentially only five months of the year the WP&YR witnesses more than 450,000 riders annually!

This number ranks it ahead of the equally popular Strasburg Railroad nestled within Pennsylvania's bucolic Amish Country (Lancaster County).

Its success is due not only to its spectacular scenery but also a near limitless supply of tourists which de-board from cruise ships at Skagway.  The trains literally pull up right next to these ocean-going cities.

According to Beth Cline, the company's Director of Passenger Sales and Service, "About 85% of our passengers are off the ships."

No other tourist railroad enjoys such a unique setup, with such business right at their doorstep.  With a rich heritage in hauling freight, the narrow-gauge WP&YR has contemplated reviving the entire 111 miles to Whitehorse for freight service, or least lengthening excursions.

However, the trackage above Carcross currently remains out-of-service and it is unknown if, or when, the entire line may be restored.