Indiana has acted as a gateway state since railroading's earliest days.  Several important eastern systems crossed its borders as they sought Midwestern connections at Chicago, St. Louis, Indianapolis, and even Kansas City.

There were also lines accessing Michigan while powerful southeastern carrier Southern Railway maintained a southern corridor not far from the Ohio River in an effort to reach St. Louis.

Indiana was even home to its very own railroad, the Chicago, Indianapolis & Louisville Railway.  Better remembered as the "Monon" this company was an important transportation artery until being swallowed by the much larger Louisville & Nashville during the 1970's.

Today, several museums and a few tourist-based scenic train rides can be found in the state.

There are some real jewels including the French Lick Scenic Railway (operated by the Indiana Railway Museum), trips offered by the Indiana Transportation Museum, and even excursions hosted by the Hoosier Valley Railroad Museum. 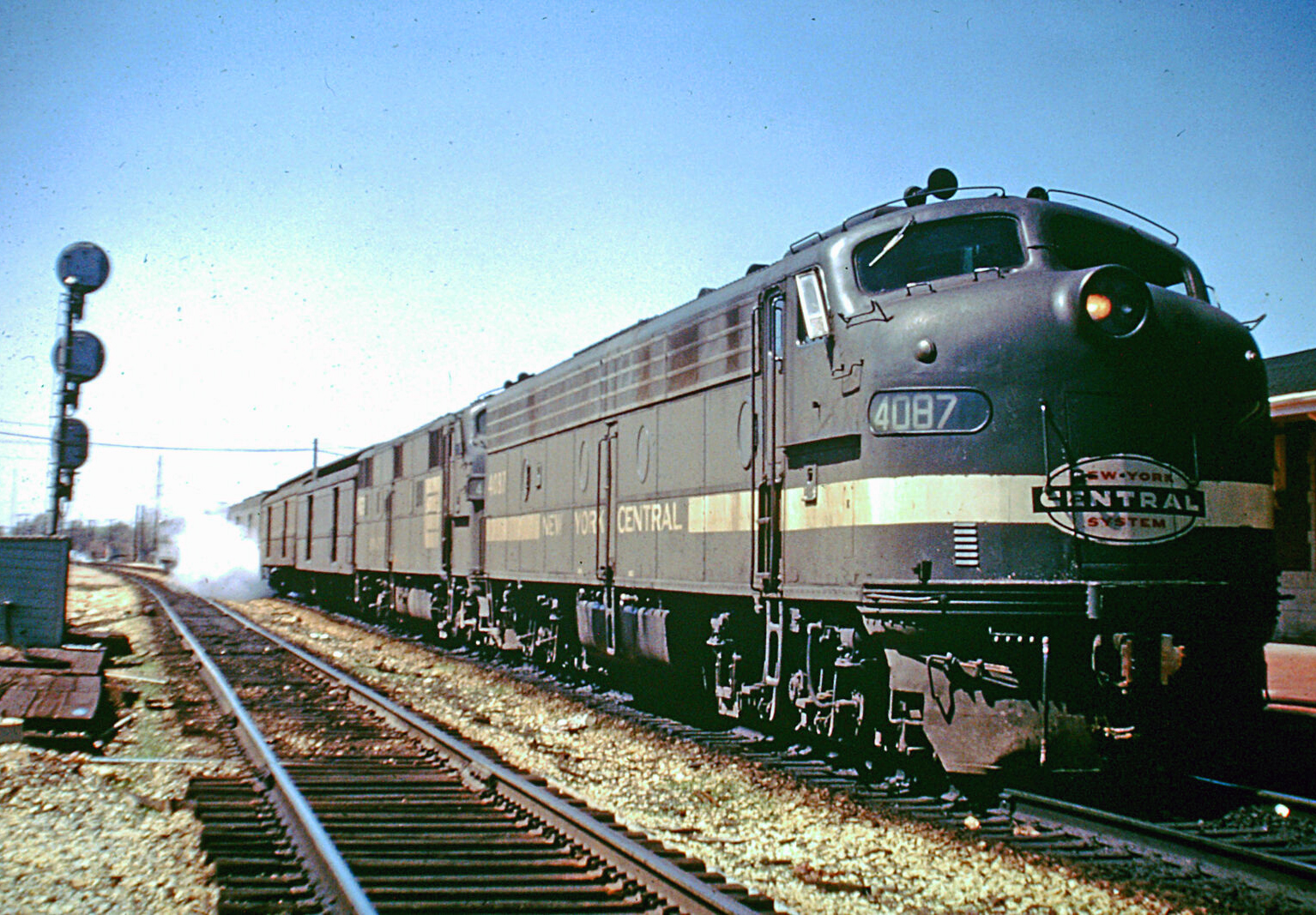 It's the early Penn Central era as an E8A and E7A have an eastbound consist containing what appears to be primarily mail/express at the station in Elkhart, Indiana on April 19, 1969.

A Brief History Of Indiana's Railroads

According to an in-depth analysis Trains Magazine published in its January, 2007 issue entitled, "Great Railroading: State-By-State," Indiana's introduction to railroading began when the Madison, Indianapolis & Lafayette Railroad was chartered on February 3, 1832 for the purpose of linking its namesake cities.

The system was to run from the Ohio River in a roughly northwesterly direction.  Unfortunately, support failed to materialize and after years of dormancy the state took over the project in 1836 as part of an Internal Improvement Act to improve infrastructure.

Several more years passed with little work carried out; the state attempted to have private contractors take over the endeavor, and they were able to complete a 27.8-mile segment from Madison to Queensville by June 1, 1841.

However, attempts to finish the line, at least to Indianapolis, proved unsuccessful.

Finally, the Madison & Indianapolis Railroad Company (M&I) was chartered in early 1843 as another private operation to pick up where the state and the previous contractors had left off.

During the next four years the line was finished in stages until the entire 86 miles was completed to Indianapolis on October 1, 1847.

The railroad contained a very unusual and unique design feature for a standard-gauge operation of its length.  It contained an incline operation that began in Madison, north of the intersection at West Main and McIntire Streets, which ran a length of 7,012 feet (1.33 miles).

During this distance it rose 412 feet with a grade of 5.89%, earning it the distinction as the steepest standard gauge main line in the United States.

According to the book, "The Routledge Historical Atlas Of The American Railroads" by author John F. Stover, mileage peaked at over 7,400 and then slowly declined as other modes of transportation gained favor.

Today, according to the Association of American Railroads, 41 different freight railroad continue to operate 4,274 miles of trackage.

Based in New Haven this organization is the official caretaker of the restored and operational Nickel Plate Road 2-8-4 #765.

They operate numerous excursions east of the Mississippi River throughout the year while their downtown facility in Fort Wayne keeps the locomotive ready for service.  To learn more please visit their website by clicking here.

The Hesston Steam Museum, operated by the LaPorte County Historical Steam Society and based in Hesston, is an organization dedicated to the preservation of steam-powered machines.

Among their collection are several operating narrow-gauge steam locomotives of various types, leisurely taking passengers on short trips along 2.5 miles of track.  They also run scale trains of various size. 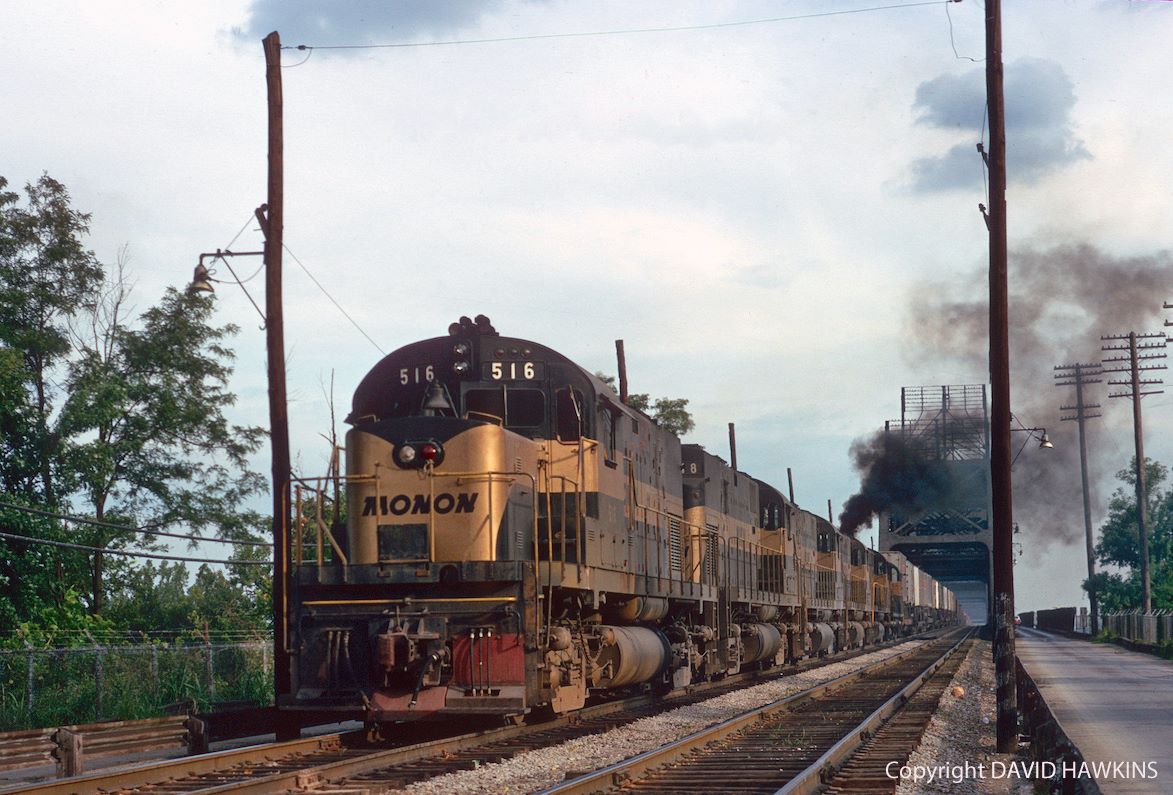 The Indiana Railway Museum, which also operates the popular French Lick Scenic Railway, is based in French Lick, Indiana. They operate a 20-mile round trip excursion over former Southern Railway trackage through the Hoosier National Forest.

Special events and excursions are also operated throughout the year such as dessert trains, Halloween specials, and the Polar Express for the Christmas season.

The Indiana Railway Museum's mission is to preserve Indiana's railroading history and the industry's in general.

The IRM features more than 65 pieces of historic railroad equipment, is proudly maintained by more than 400 members/volunteers/paid staff, and enjoys more than 25,000 visitors annually.

The history of the organization begins in 1961 when a group of locals from Westport launched a small tourist line using a diesel locomotive and three passenger coaches.

The museum moved operations in 1971 to Greensburg and again moved in 1978 to French Lick when the Southern Railway offered 16 miles of a former branch between West Baden and Dubois (passing through French Lick). Today, the museum operates about 10 miles of this line between French Lick and Cuzco. 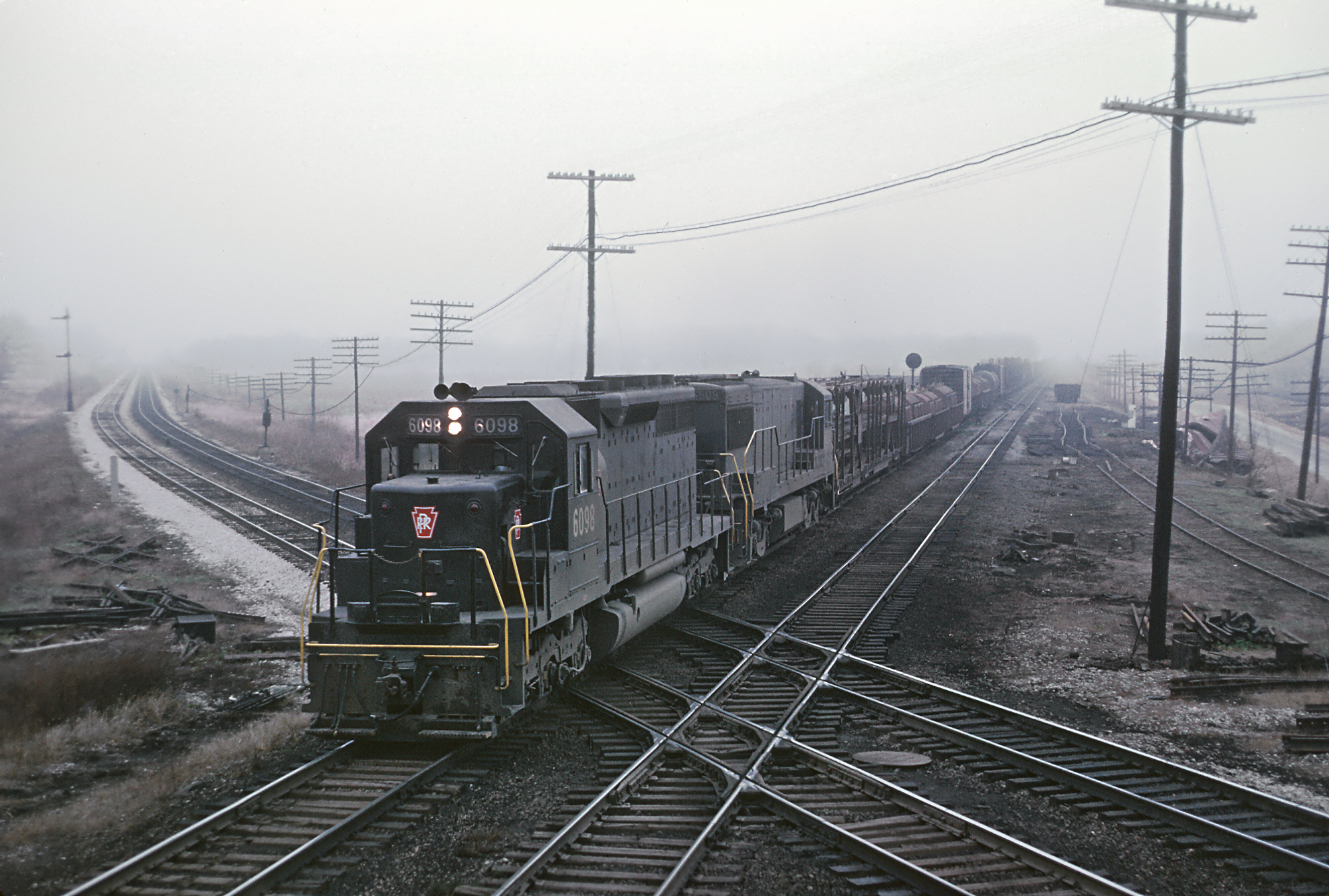 The Hoosier Valley Railroad Museum is based in North Judson and aims to preserve the region's rail history.  In railroading lore this town's story is particularly noteworthy.

Until the 1970's it was a major junction with four trunk lines intersecting there which included the Chesapeake & Ohio, Erie, New York Central and Pennsylvania.

The location was once so busy that up to 125 trains every day passed through the area, protected by an intricate interlocking arrangement.

In a microcosm of just how far railroads have declined in importance since the 1970's, incredibly only a short segment of the C&O's former Chicago main line remains active today.  It is abandoned just east of North Judson but is still in place as far as Malden.

All other corridors lay empty today.  The C&O section currently plays host to excursions, using a combination of cabooses and open air cars for passengers to enjoy the journey.

The Indiana Transportation Museum was an organization based in Logansport and once held the state's largest collection of preserved transportation equipment.

However, a dispute with Noblesville, where the organization was previously located, led to many pieces being sold off. The group previously hosted excursions on former New York, Chicago & St. Louis (Nickel Plate Road) trackage.

The history of the Indiana Transportation Museum dates back to 1960 when it began as an all-volunteer effort to keep alive the state's railroad history.

The group would eventually gain a segment of the former Nickel Plate line between Indianapolis and Tipton, a distance of about 38-miles (today this property is owned by the Hoosier Heritage Port Authority, which itself is owned by the cities of Fishers, Indianapolis, and Noblesville).

For many years the line not only hosted excursions but also freight trains operated by the Indiana Rail Road. However, this service dried up in 2003 when the last customer, a coal-fired power plant switched to natural gas.

The cities subsequently lost interest in the rail excursions and evicted the museum.  It moved most of its equipment to a site in Logansport in 2018 but never reopened to the public.

This organization is housed within the Linden Union Depot, a wooden structure built in 1909, playing host to the Toledo, St. Louis & Western Railroad (a future component of the New York, Chicago & St. Louis or "Nickel Plate Road") and Chicago, Indianapolis & Louisville (Monon).

The building closed for railroad purposes in 1973 and did not reopen as a museum for another twenty years.

It was officially dedicated on April 13, 1993. They have numerous artifacts on display which includes many models (O, HO, and N) along with two impressive N-scale layouts and an HO-scale layout.

Their mission statement is "to preserve and protect the historic 1909-built Linden Depot and its railroad memorabilia as well as to promote its related railroad history. The mission includes the acquisition, restoration, preservation and display of railroad equipment, artifacts and mementos related to railways past and present."

Also be sure and visit their preserved caboose and four, century-old semaphore signals.

This museum, based in Madison, is housed inside the town's restored Pennsylvania depot (constructed of brick and opened in 1894 under the Pittsburgh, Cincinnati, Chicago, & St. Louis Railroad name, a PRR subsidiary).

The facility is operated by the Jefferson County Historical Society and is open during select days throughout the year featuring historic displays both indoors and out. 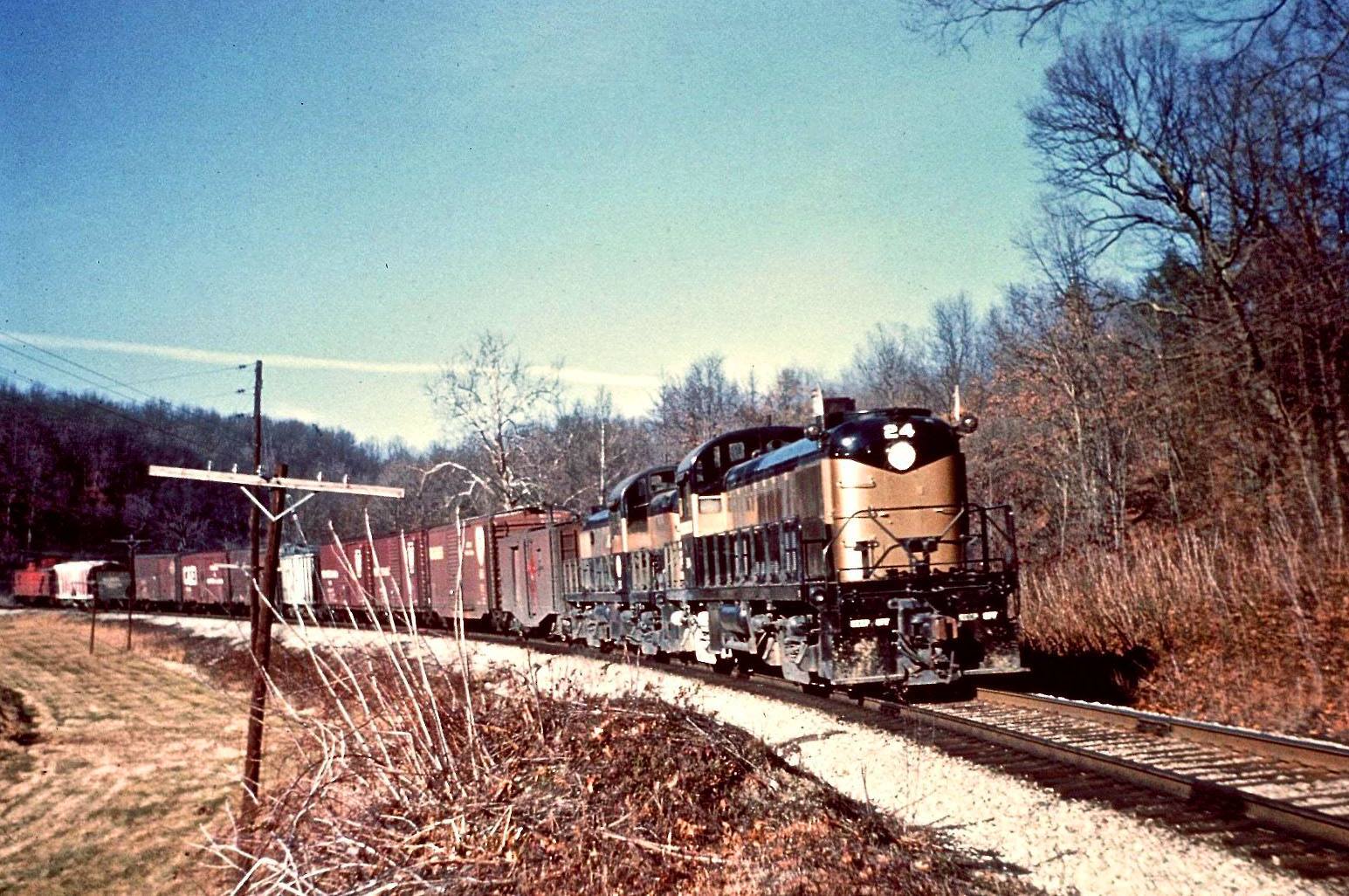 A pair of Monon RS2's are southbound with a short freight train at Milepost 297 between Pekin and Borden, Indiana during the 1950's.

One of the largest museums dedicated to the history of the New York Central is this facility located at Elkhart, once a busy terminal on the railroad.

The organization opened in 1987 and has put together a nice collection of historic equipment over that time.

Their most notable pieces include one of only two surviving examples of New York Central's 4-8-2 "Mohawk" steam locomotives, #3001 (Class L-3a), manufactured by American Locomotive in 1940.

They also house New York Central E8A #4085; built in August, 1953 it is historically significant as the lead locomotive of the final, eastbound run of the 20th Century Limited on December 2, 1967.

Finally, one of Pennsylvania Railroad's successful line of GG-1's electrics is on display there, #4882 (built by the railroad in 1939).  The museum is open throughout much of the year.

They offer several special excursions every year from Valentine's Day trips to Mother's Day specials, in addition to several events during the holiday season.  You can also take part in a locomotive cab ride.

This attraction has grown in popularity in recent years, thanks in part to the scenery afforded throughout southern Indiana and, in particular, along the Ohio River.

The Wabash Valley Railroader's Museum, which began during the 1990's, is located in Terre Haute, Indiana and sits next to a very active CSX Transportation main line.

This town is similar to North Judson in that it was once served by multiple railroads including the Milwaukee Road, Chicago & Eastern Illinois, New York Central, and Pennsylvania.  Many of these lines remain in service today.

The museum is operated by the Haley Tower Historical & Technical Society (a 501(c)(3), not-for-profit organization) and among their collection is two preserved interlocking towers, Haley Tower and Spring Hill Tower, along with a small depot from Turner that was originally built in 1884 for the Terre Haute & Indianapolis Railroad (Pennsylvania).

The group's so-called "Master Plan" is to build an impressive facility with a large indoor facility housing their equipment and a small, scale-railroad attraction. 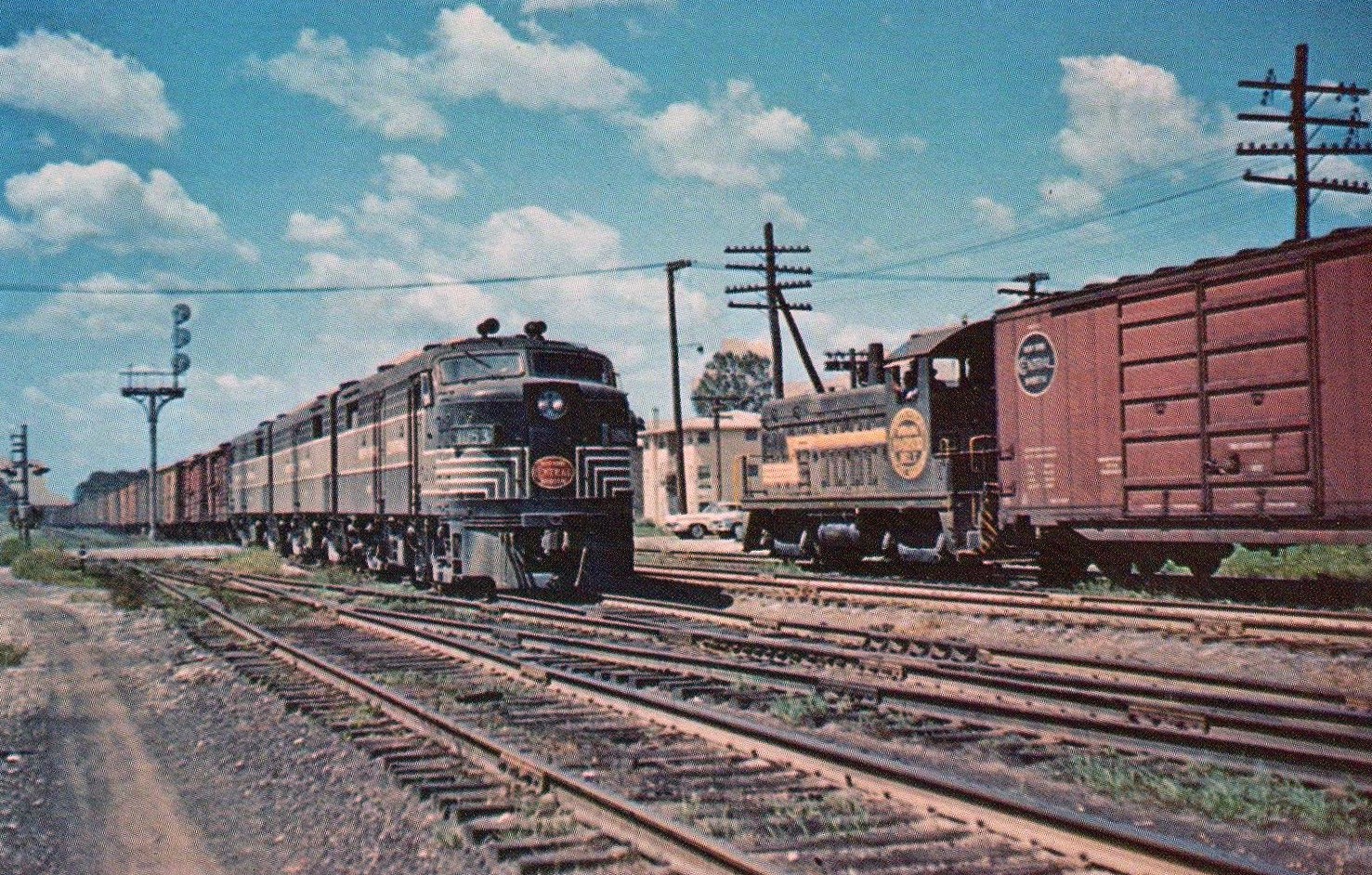 What would certainly be considered one of Indiana's more popular excursions is the Whitewater Valley Railroad based in Connersville.

Its 19-mile line connects Metamora and their trains are powered by one of several diesel locomotives on the grounds.

While there are currently no steam locomotives in use the group has several preserved.  These include:

The railroad also hosts a number of special events throughout the year such as the Polar Express and "A Day Out With Thomas" the tank engine.  To learn more about riding their trains and planning a visit please stop by their website.