North Carolina scenic train rides have a lot to offer even though the state is not traditionally known for such attractions.

Two of the country's more well-known operations are located there, the Great Smoky Mountains Railroad at Bryson City and Tweetsie Railroad in Blowing Rock.

Their success can be largely attributed to two things; the beautiful and majestic Smoky Mountains, a region which enjoys more than 10 million visitors annually, and steam locomotives.

Both railroads utilize such and they always draw large crowds.

In addition, don't miss the North Carolina Transportation Museum in Spencer (which occasionally operates Bonsal Sand 0-6-0T #7 and displays several other steamers) and the New Hope Valley Railway at Bonsal (about 25 miles southwest of Raleigh). 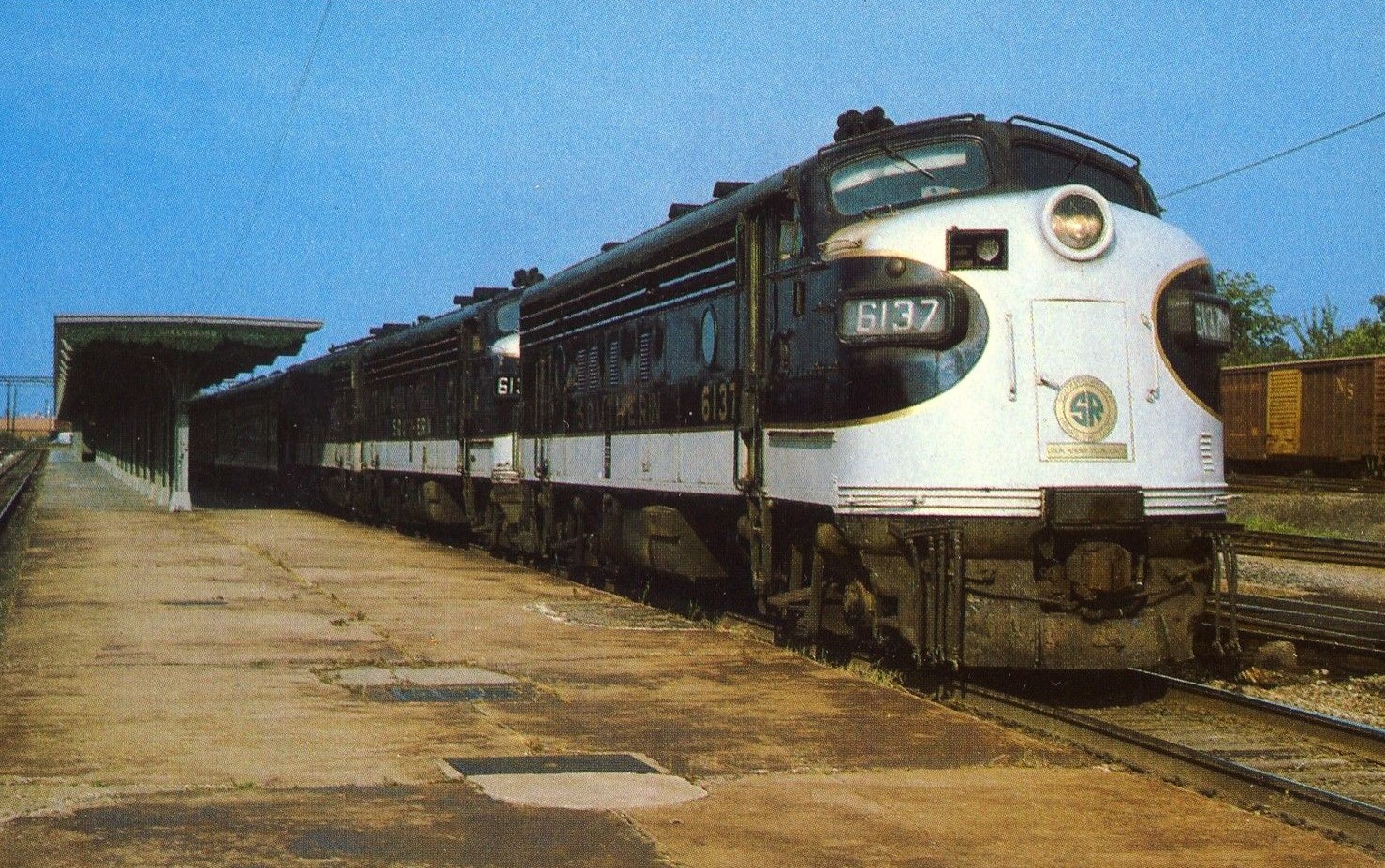 North Carolina's railroad heritage begins in 1834 when the Wilmington & Raleigh Railroad (W&R) was chartered by Wilmington's business elite to connect its namesake cities.

The year began with apprehension and disappointment when the state legislature declined a bond for the project in January.

However, after promoters dropped this provision and instead moved towards a charter, the state gave the go-ahead.

Another issue cropped up when the citizens of Raleigh did not want the railroad accessing their town.  To rectify this, officials decided to bypass the capital and reach Weldon where an interchange could be established with the Richmond & Petersburg.

At a distance of 161.5 miles, it was then the world's longest railroad, even eclipsing the South Carolina Canal & Rail Road which had opened a 136-mile corridor between Charleston and Hamburg, South Carolina (directly across the Savannah River from Augusta) in October, 1833.

In 1855 the W&R's name was changed to the Wilmington & Weldon (W&W) to more accurately reflect the railroad's termini.

The W&W would go on to join the Atlantic Coast Line Railroad, formed in 1900 through the merger of several smaller systems.

There were five primary components of the original ACL.  Its earliest predecessor was the Petersburg Railroad, chartered in 1830.

It opened for service a few years later between its home city and Garysburg, North Carolina, just across the Roanoke River from Weldon.

At Petersburg, a connection was established with the Richmond & Petersburg, completed between its namesake cities in 1838.

Together, the two roads provided a direct route from Richmond to the Tarheel State.  As the 1840s dawned more connections from the south extended through service into South Carolina and beyond, such as the previously mentioned Wilmington & Weldon.

During the industry's heyday, North Carolina boasted a wide range of railroading, from local short lines to coal trains in the western mountains (notably the Clinchfield Railroad).

In addition, coastal operations could be found on the original Norfolk Southern at Elizabeth City and the ACL serving Wilmington.

While all of the state's railroad attractions are worth the visit, the Great Smoky Mountains Railroad is a must see.  It not only offers great scenery but guests also have the option of several different excursion packages, all in climate-controlled cars.

Finally, if you are interested in North Carolina scenic train rides that pertain to specific events, such as "The Polar Express," Halloween, Thomas the Tank Engine excursions, or fall foliage events please visit the main tourist trains section of this website.

One of the more unique scenic train rides in North Carolina can be found at the Charlotte Trolley which tells the history of Charlotte's former interurban operations. The trolley operates on the weekend, Saturday and Sunday, and current has two cars operational.

This small organization is based inside Cherryville's restored Seaboard Air Line brick depot (completed in 1921).  There is no cost to view their layouts although they do accept donations.  The club normally operates on select days of the week.

Without question, the most popular of all North Carolina train rides can be found at the Great Smoky Mountain Railroad in Bryson City.

This attraction has been in operation since 1988 using tracks once owned by the venerable Southern Railway, which the company called its Murphy Branch.

Train rides are hosted throughout much of the year although they also offer special events, such as "Thomas The Train" and holiday festivities. The railroad is covered in more detail here.

This small museum is located at Hamlet inside the Seaboard Air Line's beautifully restored depot which opened in 1900.

It has been open since 1976 and tells the local railroad history via numerous exhibits, displays, and various other artifacts.  The facility is normally open each weekend.

They currently have a multitude of various diesel locomotive switchers they use to power their trains along with one operable 0-4-0T steam locomotive. 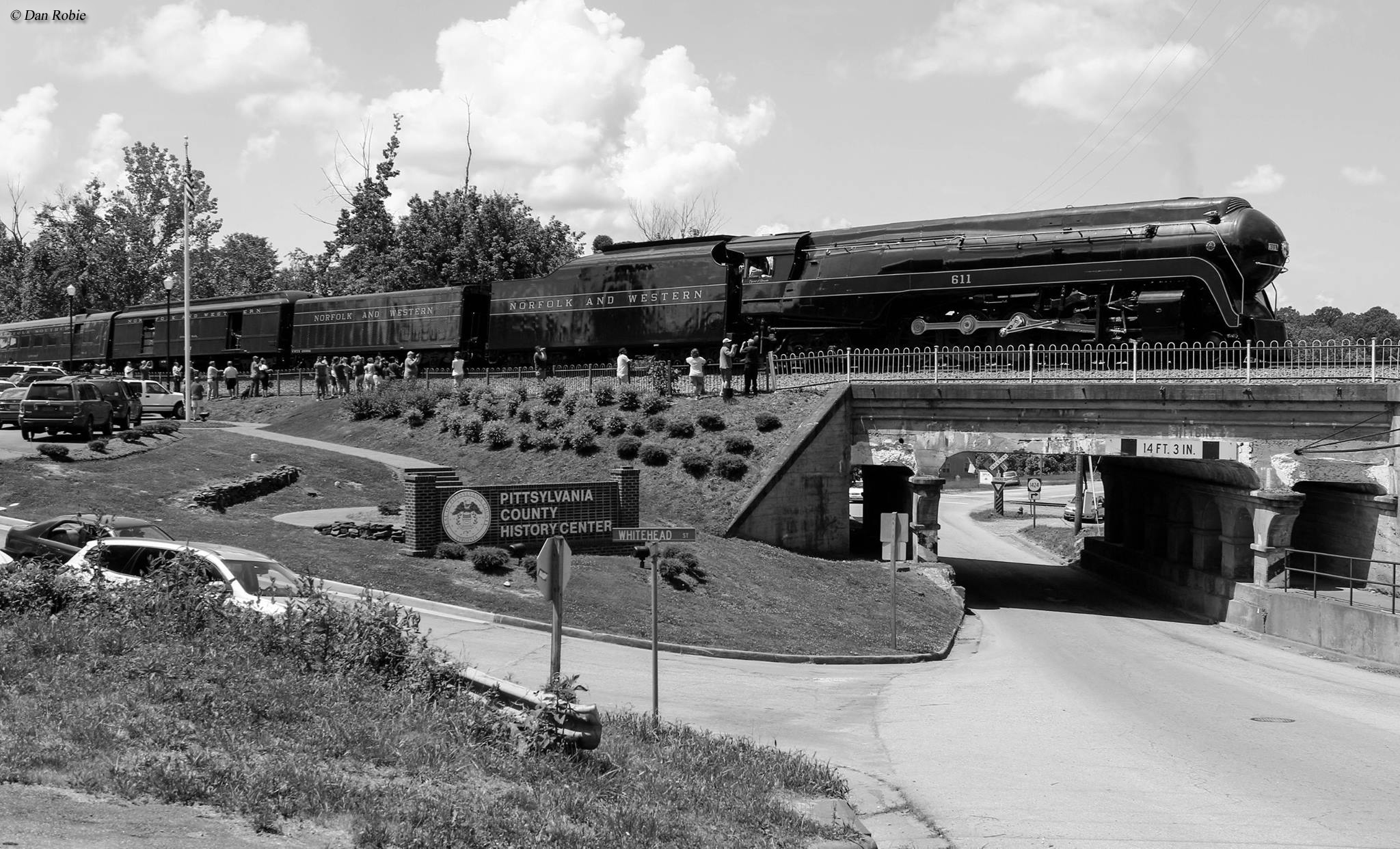 The one place in the Tarheel State where both scenic train rides and a fabulous collection of preserved equipment can be experienced is at the North Carolina Transportation Museum.

It is located in Spencer, situated on the former Southern Railway’s largest steam locomotive repair shops.

Today the museum sees tens of thousands annually and is housed in three of the former shop buildings (currently); the Bob Julian Roundhouse, the Flue Shop, and the Master Mechanics Shop.

As part of the museum they operate excursion trains on the museum grounds and is one of just two locations in the United States to feature the live steam locomotive version of Thomas the tank engine.

Scenic Train Rides In NC At A Glance

As you can see from the information presented here, there are a number of quality trains rides in NC to choose from.

The Great Smoky Mountain Railroad (GMSR) and Tweetsie Railroad are top tourist destinations which attract riders from around the country.

The former sees nearly 180,000 annually while the latter is regarded as one of the "Top 20 Events In The Southeast" according to Southeast Tourism Society (it is also recognized as the "Best Place To Take The Kids In The Blue Ridge Mountains" according to Blue Ridge Country Magazine).

Overall, the state has a rich heritage with railroads, tracing their roots back to the movement of agriculture (tobacco and cotton), manufacturing, and textiles.  To some extent this remains the case today. 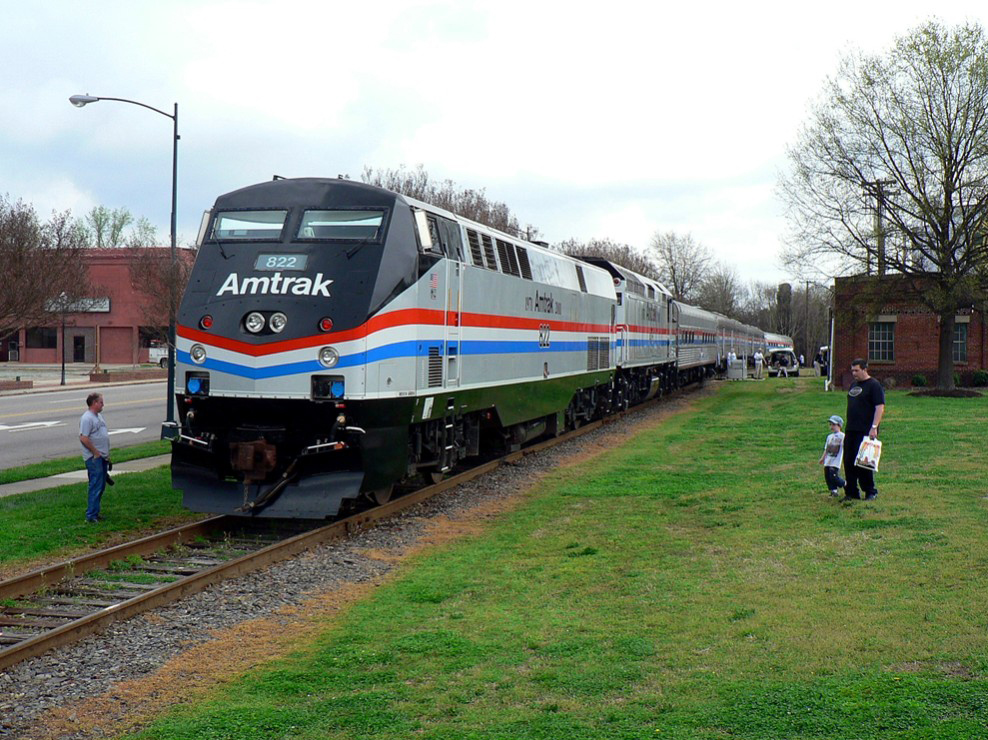 Finally, while this guide is geared towards NC scenic train rides as tourist attractions, the state's commuter and intercity services should also be mentioned.

Few others offer such a vast collection of services as North Carolina.  The long term plans involve opening a passenger route from the Atlantic coast (Wilmington) to the mountains (Asheville) while linking the state's major cities in the process.

To do this, several rail corridors abandoned years ago have been preserved for future use.  If not for this foresight the state's long-term objective would be impossible to accomplish.

North Carolina also has plans to open high-speed service from Raleigh to Richmond, very near Amtrak's Northeast Corridor which begins at Washington, D.C.

In addition, a connection to Virginia's capital city would open through connections to other Amtrak trains which will provide direct service into the Northeast.

The initiative, of course, is a long-term endeavor but the future is promising in one of America's most forward-thinking states regarding passenger rail.  If you are interested in learning more about these train rides in NC please click here.

This museum is located in Valdese and operated by the Piedmont & Western Railroad Club.  They offer tours during the weekend of their extensive model layouts, by appointment only.

This relatively recent organization was formed in 2017 to preserve the rail history of central and eastern North Carolina.

While the state was served by big names in this region such as the Southern, Atlantic Coast Line, and Seaboard Air Line there were also several mid-sized systems or short lines located there; names like the Norfolk Southern, Carolina & Northwestern, Atlantic & East Carolina Railway, Durham & Southern, and Piedmont & Northern.

The group has plans to feature a museum and library named the Piedmont Model Railroad Park which will be open to the public.

For the time being you can visit their hobby shop called the Piedmont Model Railroad Park Store at the Cary Towne Center.

This small organization is located in Bryson City in the western part of the state, which is also home to the Great Smoky Mountains Railroad.  The museum features an impressive collection of Lionel model trains and is open during select days of each week.

The Tweetsie Railroad, based in Blowing Rock, North Carolina has been operating since 1957 and utilizes a section of the historic East Tennessee & Western North Carolina Railroad (nicknamed the "Tweetsie," this classic narrow-gauge system once served both its namesake states).

If there are two North Carolina scenic train rides you should experience it is the Tweetsie and Great Smoky Mountains Railroad.

Today, they use 3 miles of track to host trips, most often employing their, 4-6-0 "Ten wheeler", #12, to pull excursions. A further history of the railroad can be found here at the site.  Finally, for more reading about the original ET&WNC system please click here. 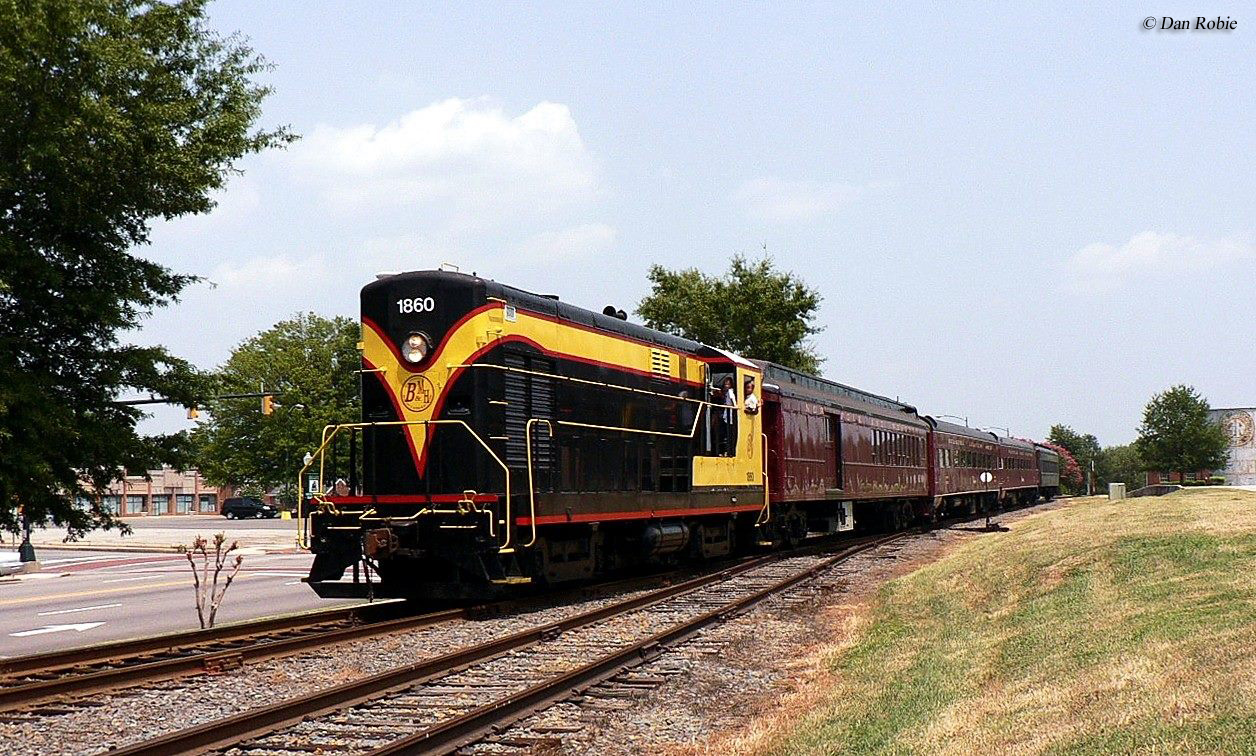 The Wilmington Railroad Museum is located in the port of Wilmington near the coast.  It first began in 1979 and in 1983 acquired the former Atlantic Coast Line freight depot, in which the organization is still housed today.

They have several artifacts on-hand, a model train layout, as well as a small collection of rolling stock (this includes Atlantic Coast Line 4-6-0 #250 built by Baldwin in 1910).